Although lots of vegetarian and vegan meals can taste amazing, they’re often not filling enough or have enough protein.

That’s why I love knowing a few bean and lentil dishes that I can turn to when I want a meat-free evening.

Lentils and beans make a wonderful base for vegetarian meals. They’re nutritious, cheap and easy to buy in most places and contain good amounts of protein.

The combination of beans and lentils make for a very filling meal that’s also lower in calories than you might think.

This recipe is chock-full of nutritious ingredients. Here’s just a few of them and some of the vitamins and minerals they include, as well as some of the health benefits they’ve been linked to:

Lentils. Even though they are higher in carbohydrates, lentils have been shown to help reduce the “bad” LDL cholesterol (1). People who eat the most legumes have also been shown to have the lowest rates of type 2 diabetes (2).

And you’ll find you’ll reduce your calorie intake without even thinking about it. This study found those who were given pasta and tomato sauce containing lentils ate significantly less during the meal and had lower blood sugar than those who ate the same meal without lentils (3).

Tomatoes.  I’m sure you’re aware of how healthy tomatoes are. But just in case you’re not, they are a great source of vitamin C, potassium, folate and vitamin K. They are especially high in lycopene, a plant compound that has been linked to improved heart health (4, 5).

There is also some Greek yogurt (vitamin B12 and protein), carrots (fiber, vitamin K, potassium and other antioxidants) and black beans, which have similar benefits to lentils. 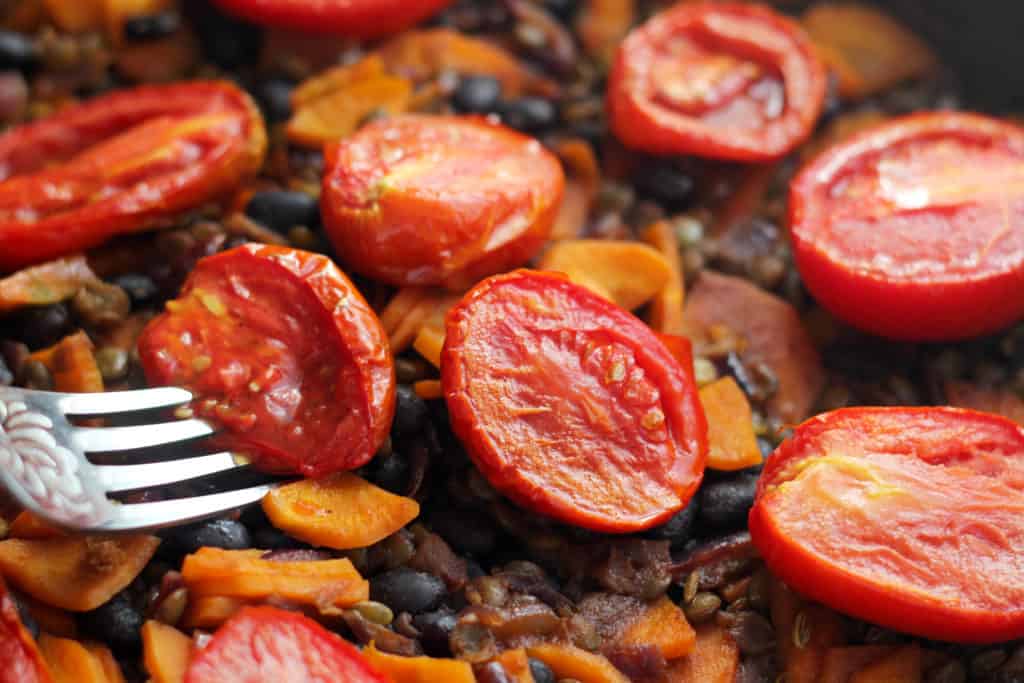 For this recipe in particular, green lentils have been used as they don’t break down like red and yellow varieties.  They provide a firmer texture that works really well in this stew.

Although roasting the tomatoes take a bit longer, they taste delicious here. Bean and lentil dishes can be a bit boring sometimes, but the tomatoes and fennel here really bring out some great flavours.

Fresh herbs generally are much more flavoursome than their dried counterparts. Parsley is a herb that doesn’t dry well, so I wouldn’t recommend the dried version unless you already have it.