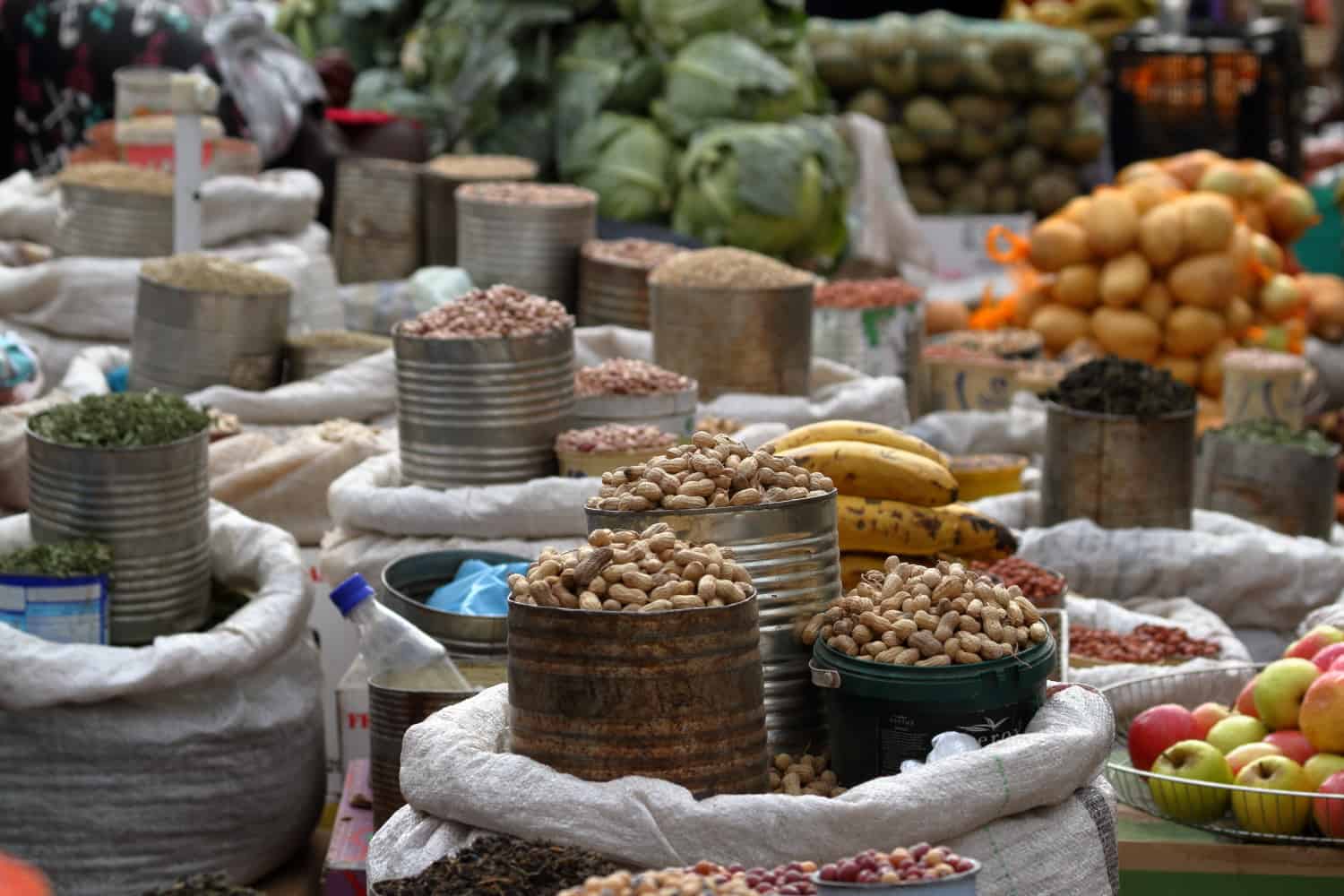 While southern Africa’s sleeping giant is yet to set the culinary world alight, this isn’t to say that Zimbabwe lacks an intriguing traditional food scene that’s worth exploring, whether as a visitor to the country or a diner at a restaurant run by Zimbabwe’s expats.

Due to its hot and dry climate, meats are often more common on menus then vegetables are. They tend to be served alongside staples of rice or cornmeal porridge which are both inexpensive and filling.

Due to its British influence and proximity to countries like South Africa, Zimbabwe’s food scene can appear ordinary to anyone used to western Europe or North America.

Here are 17 traditional dishes that can be found in Zimbabwe cuisine. 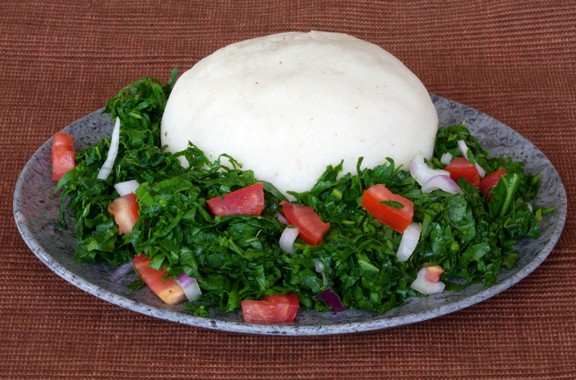 Like almost any meal in Zimbabwe, mopane worms are generally served with sadza.

Also going by the name of pap and ugali, sadza is a savoury dough-like porridge made from either maize (mealie meal), ground millet, or sorghum flour.

Eaten across southern Africa, in Zimbabwe white maize meal is preferred for the production of sadza, which sees the flour boiled in water until it takes on its glutenous structure and is shaped into balls.

Sadza is generally eaten with the hands. A small section of the ball is torn off, reshaped in the fingers, and used either as a vehicle for a sauce, or to pick up vegetables or pre-cut chunks of meat.

It has very little taste of its own, but can be flavoured with peanut.

There can be nothing quite so traditional in Zimbabwe as mopane worms, one of the country’s most loved delicacies.

The mopane worm is not entomologically speaking a worm at all, but the caterpillar of the emperor moth, which feeds on the leaves of the mopane forests of the country.

About the thickness of a finger and growing to the length of a hand, mopane worms aren’t farmed but found in the wild as they feed.

They are immediately twisted between the hands, ejecting the contents of the gut, and then either dried or boiled to preserve them.

Mopane worms are then generally fried with onion, tomato and spices.

Simply translating from the language of the Shona people as ‘meat’, nyama is actually a traditional Zimbabwean stew.

It is made using beef, with carrots and green beans to accompany it, together with sadza.

To make nyama, the beef is cut into pieces and browned off in a pan with garlic. Water is then poured into the pan, with the meat slowly cooking on a low heat so that it tenderises.

Curry powder and sliced onion are added after the liquid has reduced down, followed by tomatoes and then the carrots and green beans. It can be served as soon as the carrots are soft.

Also known as the bird plum, nyii is a small fruit of around two centimetres in length with a hairless brown skin.

Looking and tasting similar to the date, nyii is packed full of fruit sugars and vitamin C, and is enjoyed in Zimbabwe as a popular snack food.

A versatile little fruit, it can be eaten fresh direct from the tree, dried, or boiled with sorghum flour to create a sweet porridge. The leaves of the nyii tree are also picked to make a herbal tea that’s said to be good for gum and liver complaints.

Found in both Zimbabwe and neighbouring Zambia, ifisashi is a meat-free stew made from spinach leaves and peanuts (ground nuts).

It is normally served with sadza.

Its background flavour is that of onions, which are fried in oil until soft, when tomatoes and whole peanuts are tossed into the pan.

When the tomatoes have begun to break down after a few minutes, the spinach leaves are added. The ifisashi is ready when they have wilted.

Combining the sweetness of onion and tomato with the slight bitterness of fresh spinach and the richness of peanut, ifisashi should be high on your list of traditional Zimbabwean dishes to try.

Common to landlocked Zimbabwe is the freshwater tilapia, a fish that can be eaten straight from the nets of the local fishermen, but is also frequently dried or smoked for transportation to regions further afield.

Drying and smoking it gives the tilapia a texture similar to air-dried meats like jerky or biltong, and enhances its fishy flavour to that a little like sardines or anchovies.

When freshly caught, it is usually cooked whole, by either baking it in the oven or more commonly grilling it over street-side open coals.

To keep the flesh moist, the fish are brushed with oil infused with spices such as curry or chilli powder, giving it a kick that can be tempered by a mouthful of sadza.

Tilapia is not the only traditional foodstuff in Zimbabwe that can see itself onto a barbeque, or braai. Elsewhere in the country you might find this Afrikaans word replaced with kugocha or chesa nyama, but they all amount to the same thing.

A popular way of celebrating special events with family and friends, including christenings and weddings, the braai is one way in which Zimbabweans are able to show off their wealth.

As a result, you’ll find several different kinds of meat being cooked, alongside beef or pork sausages such as boerewors. They are accompanied by salads (and usually plenty of drink), and of course – sadza.

Lacto is a form of fermented cow’s milk or curd tasting much like natural yoghurt. It is usually made through the simple process of allowing whole milk to curdle naturally.

Also known by the names mukaka wakakora, and amasi by those Zimbabweans with South African heritage, lacto can be eaten straight, or added to crumbled sadza, while it is also starting to be used as a marinade for meats.

Nhedzi usually refers to a mushroom soup made from a wild mushroom with a single large brownish-white cap that grows in wetter areas of the country, most notably around the spray created by Victoria Falls in the north.

The very best nhedzi come as a bowl of creamy broth complete with pieces of tasty mushroom and some sort of bread or other carbohydrate to mop up every last drop.

Because of its wild and very localised main ingredient, nhedzi can be difficult to find on restaurant menus, so it’s always best to try it if you see it listed.

The kapenta is a small sardine-sized fish hauled in great shoals from the likes of Zimbabwe’s Lake Kariba, an artificial lake formed by a dam where it was introduced a generation ago.

This freshwater fish can be sold and prepared while fresh, although this is rare outside of the villages where it is caught, and a more expensive option.

Instead, most kapenta eaten in Zimbabwe is in a dried form, using the sun. When dried, the fish are shallow fried whole with onions, tomato, and peanut.

Mupotahayi is a corn bread or cake that all Zimbabweans know how to bake from a young age.

To begin with, eggs, butter and a little sugar are added to a pan of warm milk. The cornmeal is then added and stirred until the two come together into a texture like cake mix.

Baked in the oven in a large baking dish, mupotahayi is considered ready until its golden-brown crust has been covered in a layer of lacto and baked for a further 15-20 minutes.

It is traditionally served still warm, and has a richness to its sponge thanks to the lacto, butter, and milk used in its preparation.

While western style beers and lagers are easy to find in Zimbabwe in bottles and on tap in British-style bars, you won’t find whawha, a traditional maize beer, here.

It is the corn (maize) that provides the sugar the yeast use during the fermentation process to produce the alcoholic component of the beer.

Unlike most industrially produced brews, whawha has a cloudy appearance, and at its most basic can retain some of the corn, giving it a slightly gritty texture on the tongue.

It also has a sour odour, which is normal and shouldn’t put you off.

Foods for those with a sweet tooth aren’t as common in Zimbabwe as they are in Europe or the United States, though biscuits are a common stomach filler for children and adults alike.

A much more traditional, and healthy, treat is mapopo.

Mapopo are a sweet or candy made by combining paw paw (papaya) and refined sugar together. Pieces of the ripe orange-fleshed fruit are placed in a pan with a plentiful supply of sugar to coat them.

The mix is stirred as it is heated slowly, until the sugar crystallizes around the pieces of fruit, creating Zimbabwe’s answer to the fruit gum. Simply delicious!

More readily associated with South Africa, in Zimbabwe the term biltong has been adopted to mean any of the air-dried meats that are common to the country’s cuisine.

Biltong was traditionally prepared from hunted game, including kudu, a large antelope, and ostrich. But today you’re more likely to find biltong pre-packaged and made from beef.

Biltong can be cut either with or against the grain of the meat to create thin strips which are chewed to release their flavour.

This generally includes black pepper, salt, and a little vinegar.

Walk along any street in a town or city and pass a bakery and you’re sure to spot these pink creations pride of place in a window or on a countertop.

Also known as Candy Cake, chikenduza are usually baked to resemble a muffin, albeit a large one about twice the standard size.

They have a dense texture, though yeast is used in authentic recipes to create some rise out of the mix, and a flavour that comes from the addition of vanilla.

Interestingly, given their pink appearance, chikenduza have been traditionally seen as a cheap filling lunch for Zimbabwe’s male labourers who burn off thousands of calories a day as they work.