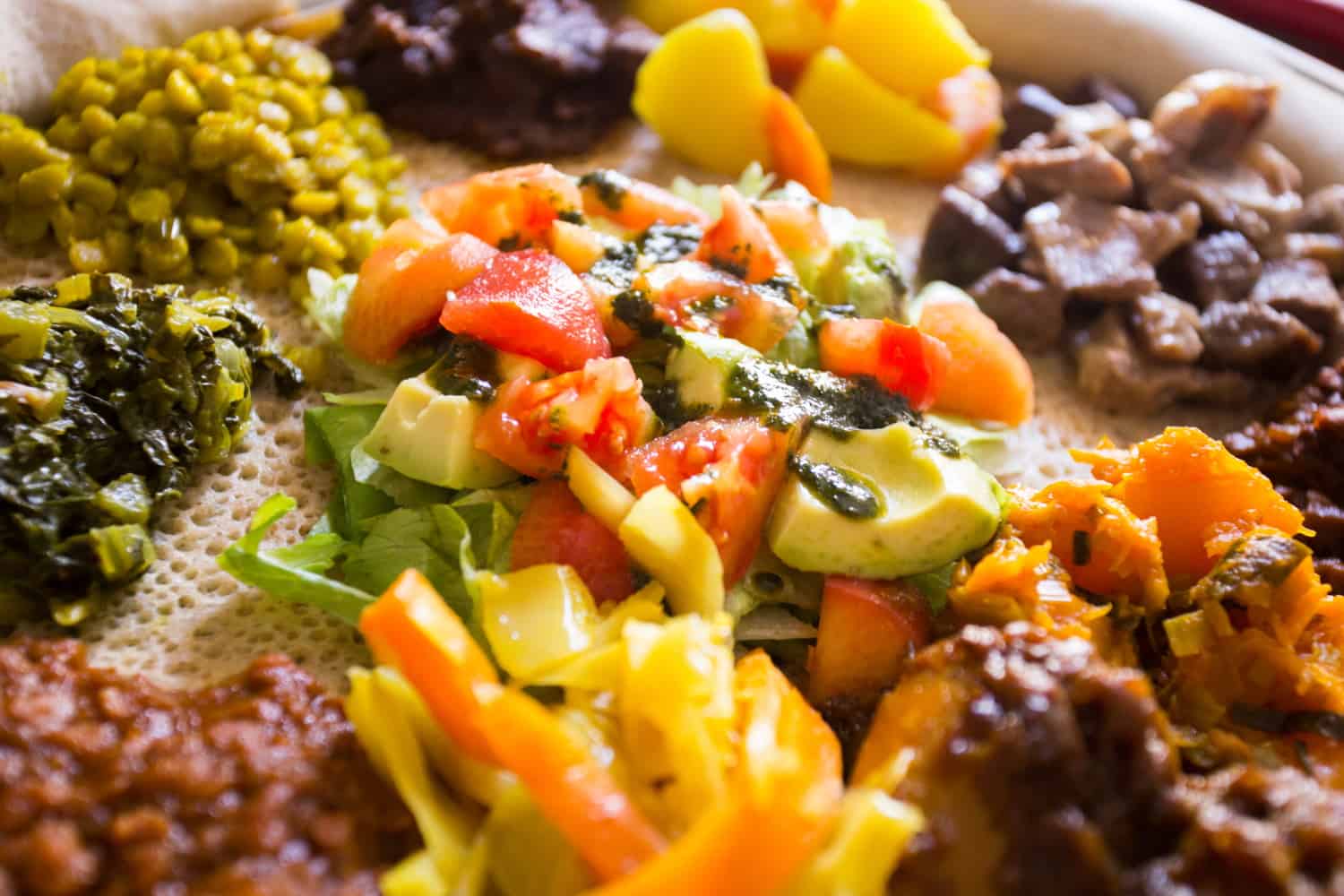 Mainland Africa’s easternmost nation, Somalia has not had it easy over the past couple of decades.

However, its long civil war has resulted in a large amount of emigration to other countries in Africa, as well as Europe and North America, making traditional Somali cuisine easier to taste than ever before.

Taking influences from Africa, the Middle East, Europe and the Ottoman Empire, Somali cuisine is unique on the continent. As a result of its multiple influences, it includes flatbreads and pasta, curried rice dishes and samosas.

But in many ways, it’s better to speak of ethnic Somali cuisine rather than traditional dishes from Somalia.

Even before the country’s current political issues, ethnic Somalis could be found living in Djibouti (formerly French Somaliland), northeast Kenya, and Ethiopia’s Ogaden – also known as the Somali Regional State.

Here then are the best traditional dishes from Somalia and ethnic Somalis. 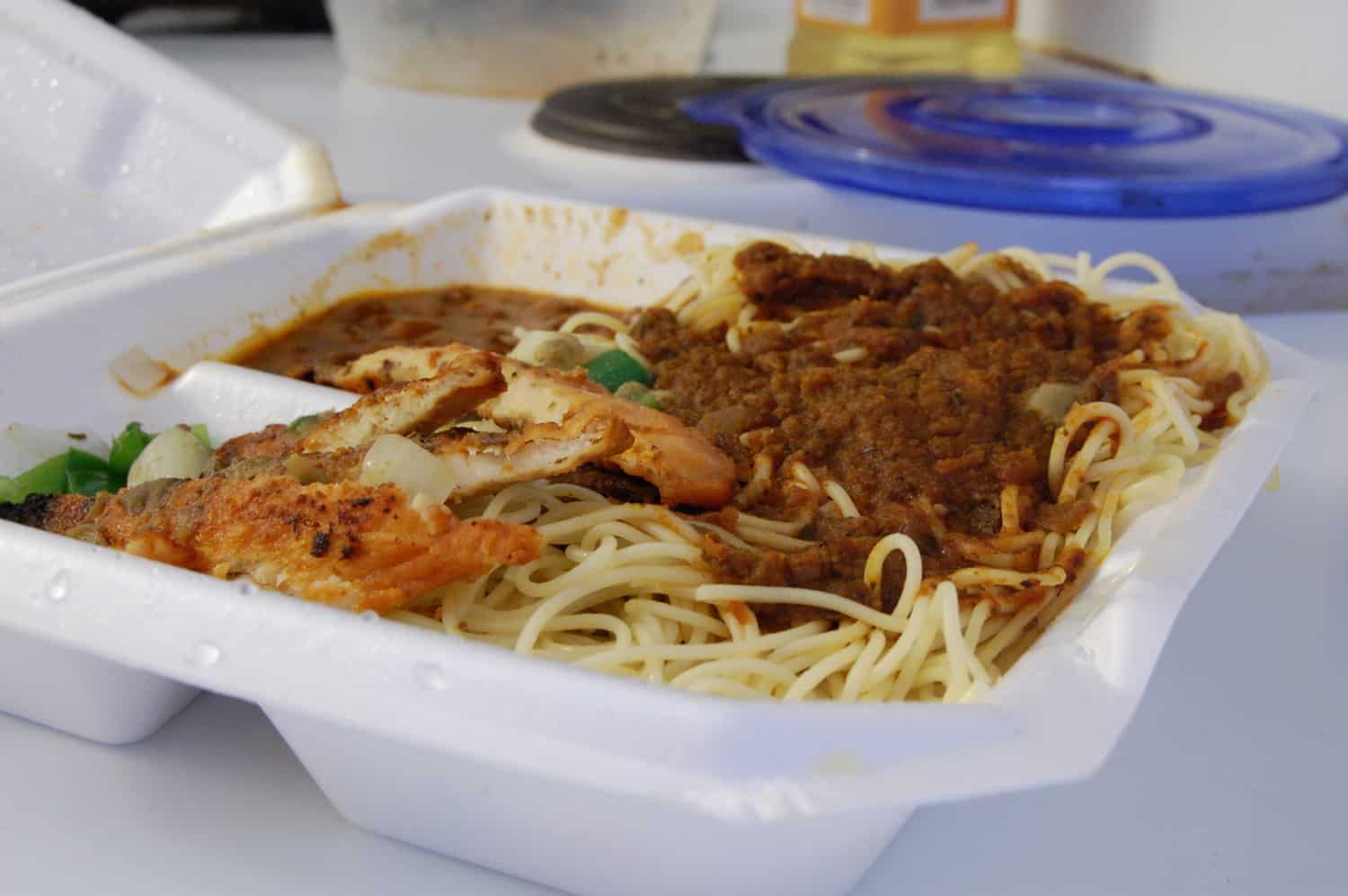 Baasto literally translates from the Somali as ‘pasta’, and entered Somali cuisine during the Italian colonisation of southern Somalia, which lasted from the 1880s until independence in 1960.

However, baasto doesn’t simply refer to the carbohydrate itself, but also to a popular dish served at midday for lunch.

The pasta, normally spaghetti, is flavoured with a rich array of spices, including cloves (qaranfuul), cardamom (heyl), and cumin (kamuun).

It is then topped with a thick meaty stewing sauce which bears a resemblance to Bolognese sauce.

The dish can also be served as a 50:50 mix with rice, although this is more common as a dish demonstrating status which is ordered in restaurants rather than prepared at home.

Despite its similarity to spaghetti Bolognese, it is often served alongside grilled or barbecued chicken.

The rice (bariis) is richly flavoured with spices, with an even more complex list of spices than can be found in baasto.

The dish makes use of the Somali spice mix of xawaash, which does little to describe what it may contain, since the word just means ‘spices.’

However, it’s known that the xawaash mix contains turmeric, coriander, paprika, and nutmeg among others.

Bariis iskukaris takes on the yellow tint of saffron (or even food colouring), to make the rice look more impressive, should the topping of raisins, nuts, bell peppers, onions, and meat not have done this already.

Red meat is usually used, with camel meat popular, although both chicken and fish are also eaten in this way. The dish is most traditionally prepared in a clay pot called a bariis dhari, and is a favourite at weddings.

Canjeero (also called lahoh) is perhaps more closely associated with neighbouring Ethiopia, where its cousin is known as the large flat fluffy and slightly-sour pancake injera.

The Somali version is different, in that it is smaller, thinner, and also sweeter than its Ethiopian counterpart. It is often consumed for breakfast, which many in the country consider to be the main meal of the day.

For breakfast, canjeero can be eaten alongside stews. Alternatively, it can be broken up and cooked in ghee (clarified butter) and sugar, or enjoyed plain dipped into milky tea.

Routinely known by just the first part of its name, ful medames is a dish of stewed beans. Fava (broad) beans are a favourite to use.

The beans are stewed with Somalia’s xawaash spice blend, meaning the dish is spicier in Somalia than versions you might find in Egypt or Sudan.

Once softened, the beans are mixed with olive oil, chopped parsley, a little chilli for warmth, and lemon juice to counter the oil.

Served alongside flatbreads such as canjeero or khubz, ful medames is often topped with segments of raw onion, and sliced hard-boiled eggs.

Ful is eaten for breakfast, although it can be found throughout the day.

Originating in the southern parts of Somalia, soor is a semi-sweet dish eaten as a dessert. It consists of a cornmeal porridge combined with fresh whole milk, sugar, and butter to form a dough-like consistency.

Also known as asida, it often comes served with an indentation in the centre filled with olive oil.

Eaten with the clean right hand (like most foods in Somalia), soor is eaten at a variety of times, from family celebrations to as sustenance to women giving birth.

When it comes to flavour, soor is surprisingly rich, given its simple ingredients list. It can also form a breakfast staple, and a side to more of Somalia’s traditional dishes such as fuul medames.

A rice dish, surbiyaan has some similarities, particularly in appearance, to the biryanis and pilau of the Indian subcontinent, but is also different in some important ways.

To begin with, the basmati rice used in surbiyaan is first soaked for a few hours in water, before being boiled, but only until half-cooked.

It is then removed from the heat of the boiling water and allowed to finish cooking in a chicken sauce, meaning the rice absorbs all the sauce’s flavours as it cooks.

Once soft and fluffy, the rice is plated up, at which point caramelized sliced onions and raisins are sprinkled on top.

Surbiyaan is thought to have reached Somalia across the narrow stretch of water from Yemen, where it is also common.

Sambuusas made their way into Somalia’s traditional cuisine from the Indian subcontinent, and are better-known around the world as samosas.

The Somali version of the samosa, like many of the country’s dishes, can be fiery hot with chilli heat.

A much-loved snack food, they are deep-fried, and usually reserved for special occasions such as the evening meals that end the daily fast during the Islamic month of Ramadan.

Their pastry is usually a thin filo-like pastry, and since they are a celebratory food, they are normally filled with minced (ground) beef, which like other meats tends to be kept back for special occasions.

Gashaato, or kashaato, helps to meet the need of Somalia’s very sweet tooth. And frankly, you can’t get sweeter, given the ingredients of sugar and coconut.

Anyone who has spent some time in Britain might recognise gashaato as being almost identical to coconut ice – a confectionary item (rather than ice cream) beloved of children.

Gashaato can be made by people with no culinary experience, since the sugar is dissolved in water under the heat of an oven hob before fresh shredded coconut (or the desiccated form) is added.

It is mixed with the melted sugar to form a thick paste that is shaped into balls or simply squashed into a baking tray and then cut into squares or rectangles once back at room temperature.

Gashaato is regularly flavoured with cardamom, which counters some of the sweetness of the sugar and coconut mix.

While we’re on the subject of desserts and sweet treats, it would be wrong not to also mention basbousa.

Basbousa probably made its way to Somalia along with the traders that crisscrossed the area during the time of the Ottoman Empire, and is thought to have originated in Egypt.

Looking a little like a sponge cake, it is prepared with a batter of either a semolina or farina (milled wheat) flour. This is cooked in a pan, rather than an oven, as would be normal with a sponge cake.

Once cool, the resulting cake is generously soaked in sugar syrup so that it’s sticky and moist. Each piece will usually be topped with an almond or another form of nut. Other versions see basbousa filled with a thick clotted cream called ashta, or more recently, with a chocolate filling.

Although sometimes known as a soup, it’s fairer to call maraq digaag a stew, with the digaag element of the dish referring to the chicken incorporated into it.

Having a largely European or Middle Eastern flavour profile, the broth that forms the liquid part of the dish is flavoured with coriander and ginger.

However, these ingredients aren’t the only ones that add to the overall taste of the finished dish. In addition to pieces of chopped or shredded chicken, maraq digaag also contains potatoes, carrots, and tomatoes.

It’s normally eaten with one of Somalia’s traditional flatbreads.

Nafaqo is a deep-fried dish that consists of a whole hard-boiled egg wrapped in finely-chopped or mashed potato before it is dropped into the hot cooking oil.

There is real skill involved in ensuring the egg isn’t overcooked while being certain the very centre is piping hot and therefore safe to eat.

Popular across the Middle East and Arab nations, nafaqo also has a cousin in the British scotch egg, which replaces the potato with chopped pork.

While their interior is soft, the deep-frying creates a crunchy exterior which is a delight to bite through.