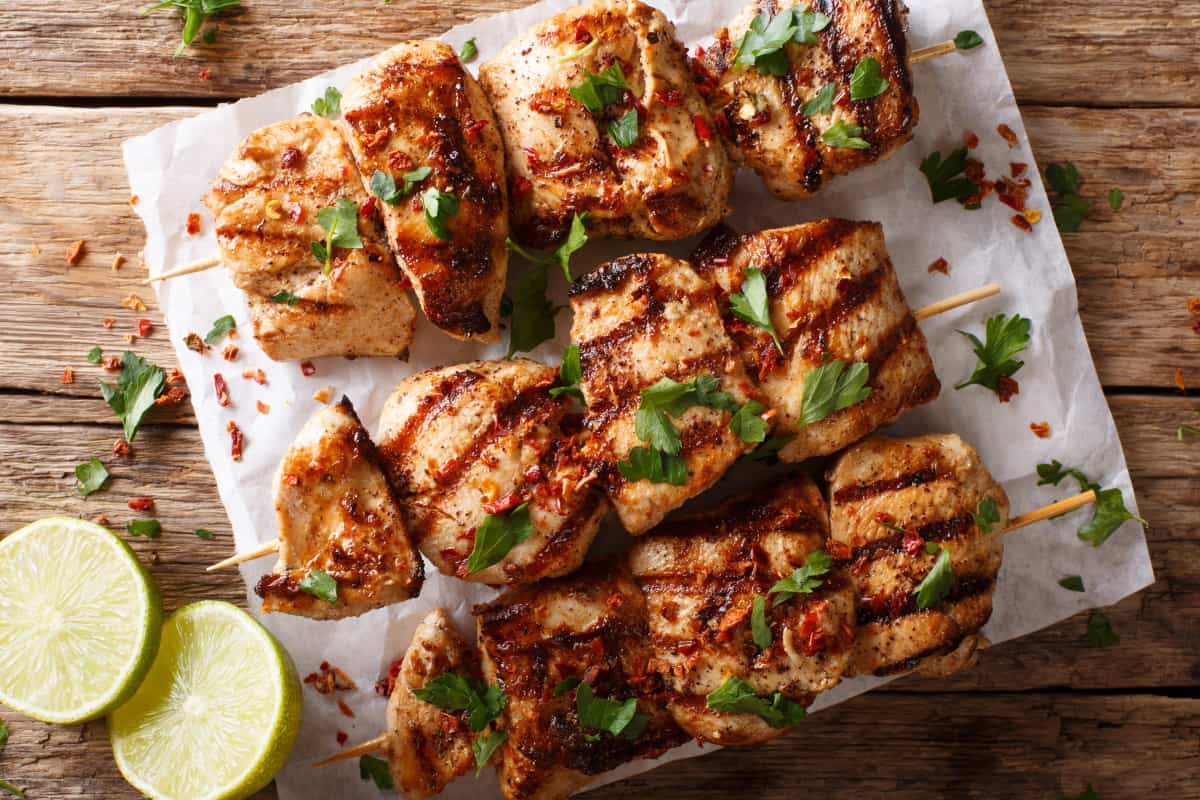 The Afghan cuisine is rich, healthy, and flavorful, with appetising aromatic dishes. Not too spicy and not too sweet, Afghanistan’s prominent flavour profiles are some of the favourites for connoisseurs.

Here, we acquaint you with some of the most iconic Afghan dishes of all time. From baked snacks to main courses, the meals below are enjoyed by all faithful Afghani food lovers. 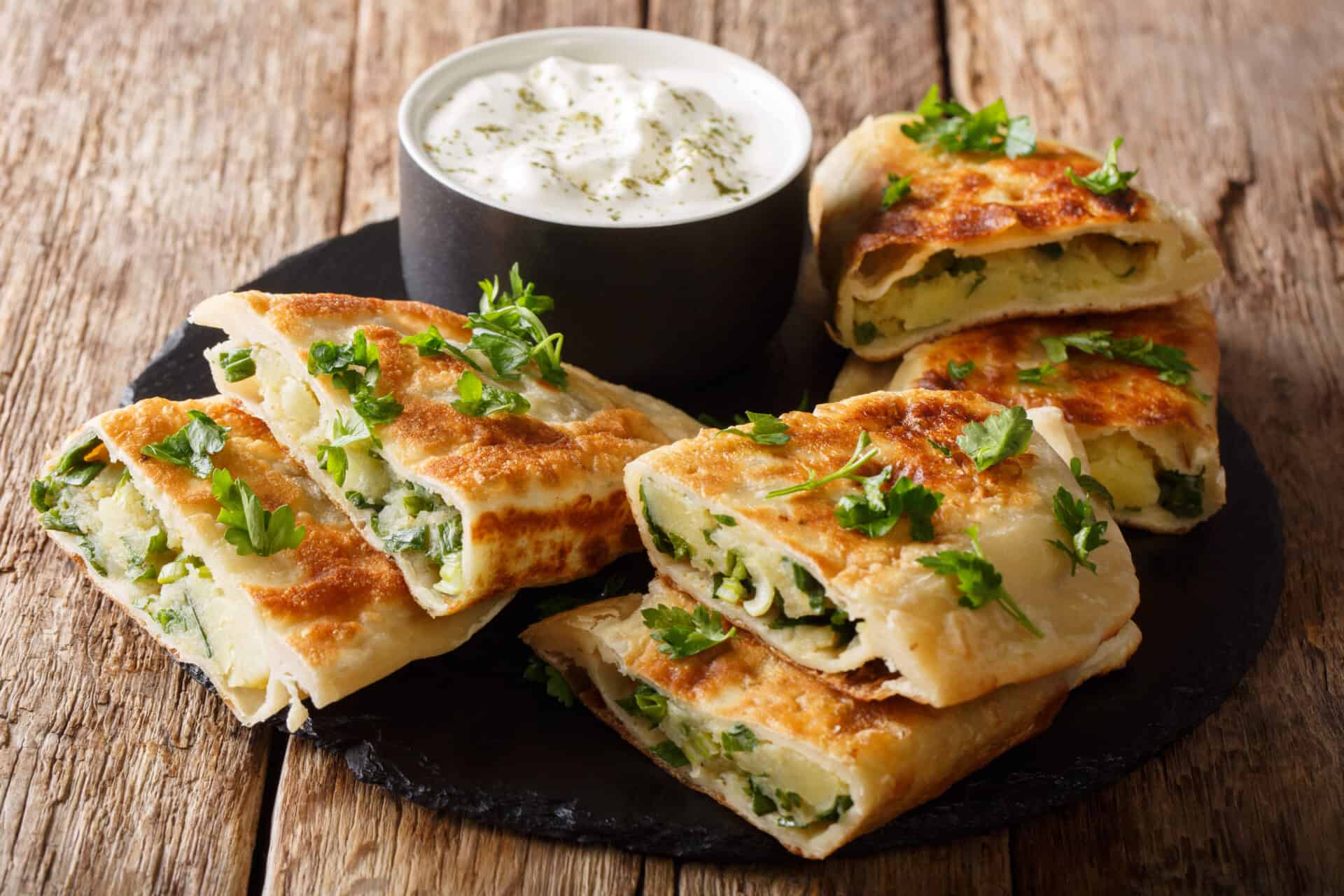 Afghan Bolani is a flatbread, stuffed, and pan-fried. Bolani is made with unleavened dough, but its real beauty comes from the vegetable stuffing inside.

Bolani is both street food and main meal. It is typically served as a side dish in Afghanistani homes.

It is eaten warm and served with a chakkah, creamy mint-flavoured Afghan yoghurt dip.

This flatbread has a thin crust with a full chewy stuffing that is rich and nourishing. Bolani is also known as Poraki and Perakai.

Kabuli Pulao is commonly known as quabili pulao, named from the Dari word ‘qabil.’ This name was derived from the meaning “capable” or “able.”

This was to support the notion that only capable chefs could make a perfect Afghanistani-style pilaf. Traditionally, Afghans can tell if a woman is ready for marriage or not by how well a woman can prepare the national dish, kabuli pulao.

The Kabuli pulao is the crown of Afghan cuisine. Historically, this meal was created for the upper-class families of Kabul.

The meal is served as an elaborate display of rice and meat. Traditionally, its ingredients include steamed long-grained rice garnished with almonds, caramelised carrots, and raisins.

It is also spiced with several taste enhancers, including cardamom, cinnamon, cumin, cloves, and turmeric. Proteins include beef, chicken, and chunks of lamb.

In Afghanistan, the taste of Kabili pulao varies from region to region because of the different blend of spices cooks use for the delicacy. Generally, though, it is always a rich assortment of rice, vegetables, herbs, and meat.

As a mouth-watering vegetable dish, Borani Banjan is made with slices of fried eggplant. The portions are left to simmer in an aromatic tomato sauce.

The tomato sauce is made with several condiments to keep its thick, rich flavour. Borani Banjan is then topped with thick garlic and mint seasoned yoghurt for serving purposes.

Natives eat borani banjo with the famous Afghanistani naan flatbread. It can also be eaten on its own or served as a side dish alongside Kabuli lamb pilaf.

Lamb meat is a common Afghan food, either as an ingredient, a side dish, or a meal on its own. Chopan kabob is a speciality of Pashtun cuisine.

The kabob is lamb meat roasted over a mankal — a transitional Afghani charcoal brazier.

Just like other Afghan foods, chopan kabob is also rich in history. The meal originated from sheepherders rubbing chunks of lamb with lots of salt. They skewered these chunks on twigs and roasted them over fires as they watched their herds.

Today, cooks make chopan kebab in several ways, including adding jijeq to enhance its flavour. Jijeq are pieces of fat from the sheep’s tail.

Some people pre-marinate the lamb meat before seasoning with sour grape powder, gard-e-ghooreh, and sumac. Chopan kabob is best served with naan bread.

Gosh e-fil or elephant’s ear is a fried sweet pastry in Afghanistan. The dough for the pastry is made from flour, milk, eggs, and sugar.

The batter is kneaded diligently, then allowed to rest. Afterwards, it is rolled into a thin crust and fried in oil.  It is fried on both sides for a few seconds.

Gosh-e fil’s deliciousness comes from how well the batter is made. These crunchy pastries are also sprinkled with powdered cardamom, icing sugar, and crushed pistachios.

Some also add rose petals to enhance its flavour and texture.

Haft mewa has cultural significance, as the soup is traditionally made for the new year. The dried fruit and nuts soup are prepared the evening before the Afghani new year, which is the first day of spring.

The soup is named after the seven fruits that make up its ingredients. These fruits include pistachios, dried apricots, green raisins, red raisins, almonds, walnuts, and oleaster berries.

The fruits are soaked in sweetened rosewater, although some prefer to use water.

Afghanistan tradition preaches starting a new year on a sweet and fresh note, which is exactly the flavour profile of haft mewa soup. This meal is enjoyed for breakfast.

Ashak or aushak are delicious Afghanistani dumplings. However, they are different from your typical dumplings because they have a special ingredient grown mostly in Afghanistan alone.

They are usually filled with either chopped spring onions or a type of leek common to most provinces in the country. This leek is known as gandana.

Aushak is served with lamb meat ragù and chakkah — a thick yoghurt sauce.

Mastawa is a traditional winter dish made with rice. Afghanistan’s mastawa combines short-grained rice, chickpeas, and lahndi, which is sun-dried mutton. These ingredients are cooked together in a broth.

The aromatic broth is typically made out of coriander, mint, garlic, turmeric, and onions. Natives also like to add bitter orange peel or narenj, which makes the dish quite spicy.

After allowing the rice to simmer in the aromatic broth, cooks add quroot. Quroot is a type of Afghani cheese made from salted, strained, and dried yogurt.

Quroot is really what makes the mastawa a unique dish, because it has no proper substitutes. Also, mastawa is sometimes prepared with gosht-e-qaqh, a type of Afghanistan dried meat.

Noodles, mint, garlic, and tomatoes are the prevalent ingredients of the aush, a thick Afghanistani noodle soup. Chakkah is also a constant ingredient for the dish.

Nevertheless, once the constant ingredients are present, aush can be made in several different ways. Some natives make them with meat, and some types of the noodle soup are meatless.

Some varieties also include legumes like chickpeas and beans. One particular type — aush-e-asli — combines noodles and meatballs strictly without any other main ingredients.

Chakkah, a strained yoghurt, is either dolloped on top of aush or stirred in at the end of the preparation.

Afghani green sauce is used as a common dip sauce for dumplings, snacks, and the likes. This green sauce can also be served with some main dishes.

It is made from a variety of spices with intense aromas that give it its strong green colour. Afghani green sauce includes ingredients like chillies, raw garlic, and lime juice.

Afghan jalebi is a famous dessert dish, known all over the world. The meal can also be consumed as a snack.

Jalebi is made from gram flour dough and dipped into a thick sugar syrup. These desserts are typically distinctly shaped as a circular cut.

Afghani jalebi is crisp and sweet, which makes for an enjoyable snack. Natives report that it tastes best when you bite into it while it is still hot.

Sheer khurma is also known as sheer khorma, which literally translates into “milk with date plum fruits.” This Afghani dish is a thick meal traditionally served on Muslim holidays.

It is served as breakfast during Eid morning prayers and again to guests as dessert.

The meal is made with ingredients like whole milk, almond nuts, dates, sugar, saffron, and vermicelli. It has the consistency of a thick soup and is usually consumed as such.

Sheer khurma is taken both as a cold or warm dish.

Another Afghani dumpling, mantu, is a popular street food that is easy to make. It is also called “Manto” or “manti.”

The dumplings are made from either ground meat or minced meat. They are usually steamed and contain little to no oil.

Mantu is made with several Afghan spices and a thin outer layer to envelop the meat inside. The dish is usually served with quroot, a sour Afghani cheese.

Lavash is a significant meal in Afghanistan’s wedding tradition. The thin bread carries meanings of prosperity and fertility for a new marriage.

Lavash is made with unleavened dough and baked in pottery. This is to preserve its original taste.

The bread dish is served with meats and cheeses. It is cut into rectangles, squares or circles. Lavash can either be soft or hard.