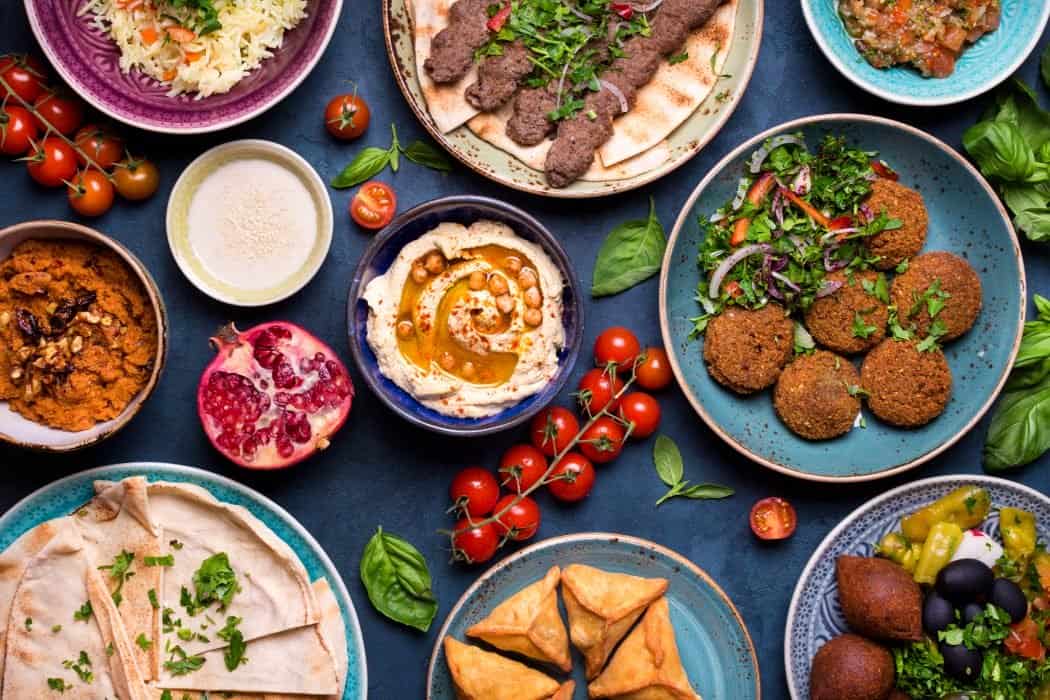 Sitting at the southern end of the Arabian Peninsula on ancient trade routes straddling Europe, East Africa and the Indian subcontinent, Yemeni cuisine shares a palate with other cuisines of the Middle East while also having its own unique flavours and recipes.

It’s fair to say that food plays a hugely important part in Yemeni culture, with guests welcomed by piles of gently steaming morsels, traditionally served as sharing platters on the ground.

Looking to try Yemen’s favourite foods for yourself? Then check out the top dishes that you can find in the country below.

Yemen’s national dish, saltah, is at its heart a stew of red meat. However, the exact style differs dependent upon which of Yemen’s regions you eat it in. Vegetarian bean versions are also prepared.

Thought to take its name from the Arabic for ‘mixture’, the flavours of saltah are built up with a hint of nuttiness and bitterness from the addition of a fenugreek dip (known locally as holba) and a blend of tomato, chilli, garlic and herbs known as red sahawiq.

On top of this base are added vegetables such as tomatoes and onions, in addition to rice, potatoes, and sliced eggs.

Saltah is traditionally eaten alongside Yemeni flatbread, pieces of which can be used as cutlery with which to scoop up mouthfuls of the meat or vegetables.

Mandi (or sometimes, Mandy) originates from the Hadhramaut region in the east of Yemen, and is a version of kabsa.

With similarities to a biriyani, mandi is a dish of rice and meat. The meat can be mutton, goat, or chicken, although the very best mandi will use lamb for the fullest flavour.

The rice is coloured with saffron and spiced with a mix known as hawaij, which contains cumin, black pepper, cardamom and turmeric.

Cooked in a tandoor, a pit oven with clay sides and roof, the meat is boiled with the spices over charcoal until tender.

The resulting stock is then used to cook the rice, with the whole dish being heated slowly for up to eight hours.

Mandi is seen as a celebratory dish and is eaten on special occasions including the Muslim festival of Eid at the end of Ramadan, as well as at wedding meals.

Like saltah, fahsa is a common Yemeni stew generally served with flatbread as the main accompaniment.

A lamb-based dish, fahsa is prepared using lamb cutlets cooked within a broth of the same meat.

Holba fenugreek dip is added alongside spices to taste, but only after the fahsa has been transferred into the madara stone pot from which it is eaten.

If you thought from the first part of our list that Yemeni cuisine is all about the stew, then think again.

Malikia is a common dessert that will put anyone with a sweet tooth in the right frame of mind.

Also known by the alternative name of masoob, it is made from overly-ripe bananas, together with breadcrumbs, cream, cheese, dates, and honey.

The result is a little like yoghurt in consistency, with the natural sugars from each of its ingredients blending together excellently – even the cheese!

To make malikia extra special, it is sometimes topped with nuts and dried fruits for additional texture.

Originating in Yemen’s ancient Jewish community, jachnun is a finger-like pastry traditionally served on the morning of the sabbath.

Jachnun is made from rolling up thin, stretched out sections of pastry brushed with a clarified butter known as samn or samneh.

When it is baked overnight in an oven, it turns to the colour of burnt sugar and takes on a texture comparable to that of a loose puff pastry.

Not overly-sweet to taste, jachnun is usually served with an oven-cooked egg, tomato salsa, and zhug, a type of holba fenugreek dip.

Others enjoy their jachnun sweeter, by adding jams to the mix.

Popular right across the Middle East with Yemen no exception, ful medames is a vegetarian dish whose primary ingredient is fava beans stewed with spices until they are soft and full of flavour.

Not dissimilar to baked beans in appearance, ful medames is normally finished with a splash of olive oil, and sometimes wedges of raw onion, before being served with pita or other flatbreads.

This filling bowlful of richness is normally eaten for breakfast, but also comes as a staple in meze platters.

Meaning ‘folded’, murtabak is a rectangle of deep-fried folded or stuffed pancake. Its crispy batter exterior contrasts with the cooling contents of shredded vegetables such as cucumber and carrot.

Other versions can contain minced meat.

After frying, the murtabak is chopped up into bite-sized chunks so it can be eaten easily with the fingers, and served with a hot dipping sauce to taste.

Served as a digestive at the end of a meal, or alongside a glass of tea or coffee, baklava meets Yemen’s demand for sweetness with aplomb.

It consists of multiple layers of crunchy yet brittle filo pastry glued together with melted clarified butter. Cooked as one large sheet on a tray, the pastry is then filled with crushed nuts and topped with generous amounts of honey before the second layer of pastry is added.

A perfect way to quieten down a pang of hunger, baklava is also greatly appreciated as a gift should you be visiting someone’s home.

Bakeries selling baklava are easy to come by, so why not try them for yourself?

Delicious shakshouka has travelled all the way from North Africa to become a common choice in Yemeni homes and restaurants.

Prepared in a heavy cast iron pan, whole eggs are poached in a sauce of tomatoes, chilli peppers, and fresh herbs until cooked but still runny, so that the rich yolk mixes with the sauce.

It is usually served with a plentiful supply of flatbreads to mop up the delicious sauce and is another of Yemen’s dishes most likely to be found at breakfast time.

Sharing its origins with mandi, haneeth is a plate comprising slowly-roasted lamb on the bone.

Prior to roasting, the cut of meat is dry-rubbed with a spice blend. It is then roasted in a tandoor oven on a low heat for several hours, ensuring the meat is both succulent and falling from the bone.

On serving, the lamb is laid on a bed of rice and usually eaten as a sharing dish among friends.

When it comes to breads, Yemen has no shortage. One you’re bound to come across, whether you’re visiting the country or enjoying its cuisine in a restaurant, is lahoh.

Prepared as a large flat disc rather like a pancake, lahoh isn’t technically a flat bread because it contains yeast.

The yeast creates lots of small air pockets in the dough, resulting in a light, spongy consistency to the bread when it is baked.

Lahoh can be eaten as an accompaniment to almost any savoury dish you will find in Yemen, but it also plays a major part in a dish called shafut.

Served as an appetiser before a main meal is brought out, shafut consists of shredded pieces of lahoh mixed with either yoghurt or buttermilk known as hakeen, holba, and strips of leek.

It is left so that the lahoh absorbs much of the liquid from the other ingredients, and then served chilled. It is particularly common as a way of breaking the fast during Ramadan.

Bread also plays an important part in tharid, a meal described by the Prophet Mohammed as the best of all dishes.

At its most basic, tharid is a dish of bread dipped into either vegetable or meat broth.

More complex and luxurious versions incorporate chunks of meat alongside chickpeas and vegetables, while some layer bread and meat so that the bread takes up all the juices of the meat without falling apart.

Although the country’s dry landscapes might suggest otherwise, Yemen is a proud producer of honey, thanks to traditions that go back hundreds of years.

In fact, Yemeni honey is in high demand in the country as it acts as a symbol of wealth as well as being an important ingredient to dishes including malikia and baklava. Sidr honey is some of the most expensive to buy in the world, costing up to $150 per kilogram.

This honey is produced by bees that feed wholly on the nectar of the Sidr tree, also known as the Christ’s Thorn or Jujube tree. It is so highly-prized that it is still given as a gift at weddings, with shops dedicated solely to this sweet liquid.

Receiving no treatments after being collected from the hives, this natural honey has been measured at a purity of 95% in lab tests, which alongside the limited volumes that can be produced, make it one of the most exclusive foodstuffs in the world.