Not all people have the chance to taste elk meat.

The delicious game meat is a dream of many people who want to know the taste of elk.

This article will cover everything you want to know about what elk tastes like and how best to eat it. 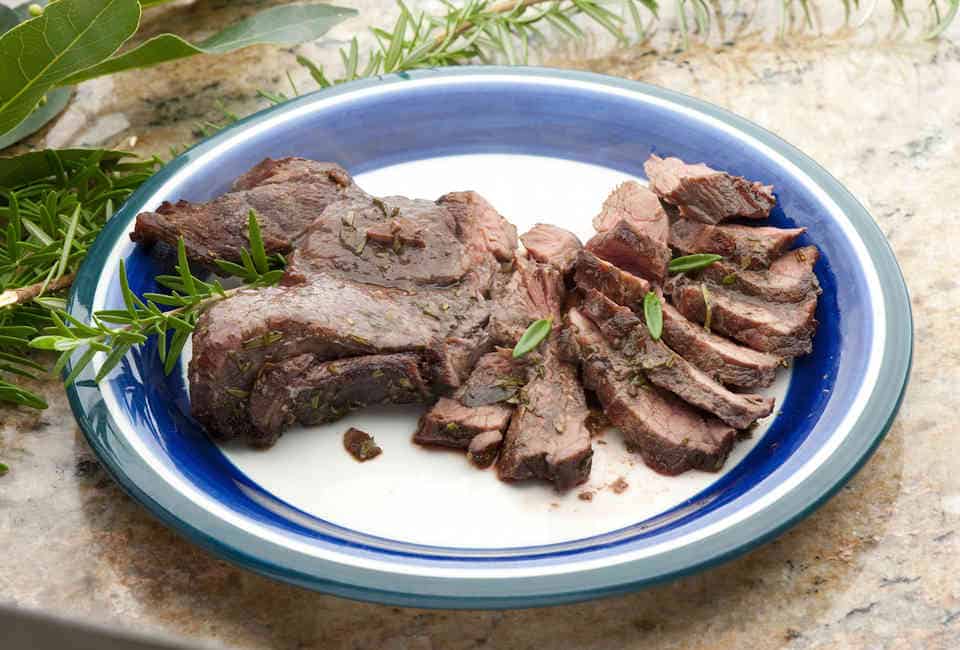 Contents show
1 What Does Elk Taste Like?
2 Elk Meat vs Beef
3 Is Elk Meat Gamey?
4 What is Elk?
5 How to Cook Elk
6 Is Elk Meat Venison?
7 Elk Meat Nutrition
8 Summary

The taste of elk meat is similar to beef. It is different in appearance due to its dark red color.

However, it’s leaner than beef, and tender if properly prepared. Elk meat is flavorful and low in fat, so it’s perfect for those wanting to reduce fat in their diet.

It has a rich but mild taste, so it can be used in almost every recipe instead of beef. A lot of consumers describe the meat as clean and slightly sweet.

Adding pork fat or beef suet to elk meat produces an even better and more delicate taste of elk burgers. Adding some seasonings to elk when frying makes it sweeter.

The elk flavor and aroma are greatly influenced by the way it’s prepared and cooked. It’s most delicious when it’s not overcooked, as overcooking can make the meat dry and tough.

Elk is part of the deer family and does taste quite similar to deer meat.

Elk and beef are similar, yet different in many aspects.

Let’s start with their taste. Grass-fed beef has a taste that’s described as slightly gamey or beefier. It has a rather meaty flavor. Elk, on the other hand, is not gamey, especially if it’s farm-raised.

Elk meat is more flavorful than beef. It’s leaner and healthier as it contains less fat and fewer calories than beef. Elk is also a better source of iron and protein than beef. Still, you can use elk as a substitute in many beef recipes.

Although many people say elk is the better version of beef, we’ll leave this decision to you once you taste it.

What does it mean if we say some meat is gamey? It means that it has a stronger and wilder flavor.

Elk is the largest member of the deer family living in Northeast Asia and North America. They are often farmed and raised domestically in New Zealand.

The scientific name of this large animal, which is also known as wapiti, is Cervus Canadensis. Although similar to the larger moose, it’s not the same animal so don’t confuse them.

Elk are one of the fastest land animals with a speed of about 45 miles per hour. Their incredible speed often saves them from becoming a victim of predators.

Elk feeds on grass and trees, so the meat is healthy and lean. Their meat is called elk meat, or simply elk.

How to Cook Elk

Elk is delicious no matter how you prepare it. You can grill it, broil it, or fry it.

To keep the meat moist and enhance its flavor, use a light marinade. The internal temperature when cooking elk shouldn’t be higher than 140°F or 60°C. You can use a meat thermometer to see when the elk has reached the desired doneness.

Chefs around the world say the secret to cooking the perfect elk is to either cook it low and slow, or hot and fast. With elk steak and burgers, make sure you leave a little bit of pink in the center.

When it comes to frozen elk, it’s best to thaw it in the refrigerator for a day or two before you cook it. Thawing it gradually prevents loss of moisture and leaves the elk meat in the best condition.

Before serving, let the meat rest.

The term venison describes meat from animals of the deer family, including deer, antelope, moose, and elk.

Some people, however, don’t like this categorization and think that venison is only the meat of deer and antelope. Still, the most common modern usage of the term includes elk.

So, yes, elk meat is venison.

Elk meat is lean and healthy, with a high ratio of polyunsaturated and monounsaturated fatty acids, unlike other types of red meat.

It’s low in fat, so it’s a good choice for anyone who likes to lose weight. Elk allows you to enjoy red meat without health risks.

Elk is lean, light, tender, and high in phosphorus, iron, and other minerals which account for its dark color. The high amount of iron makes it a good meat option for those with anemia, as well as for athletes and pregnant women.

Elk may be a rare delicacy, but it’s one of the healthiest and leanest red meats on the planet.

The taste is similar to beef but cleaner, flavorful, and sweeter.

In some cases, it reminds of deer without the gamey flavor. Elk is venison coming from an animal that belongs to the deer family.

You can boil it, grill it, or broil it, but the key is to cook it low and slow or hot and fast to preserve its tenderness and to prevent overcooking.

It’s one delicious meat, so if you ever get a chance to try it, don’t hesitate.