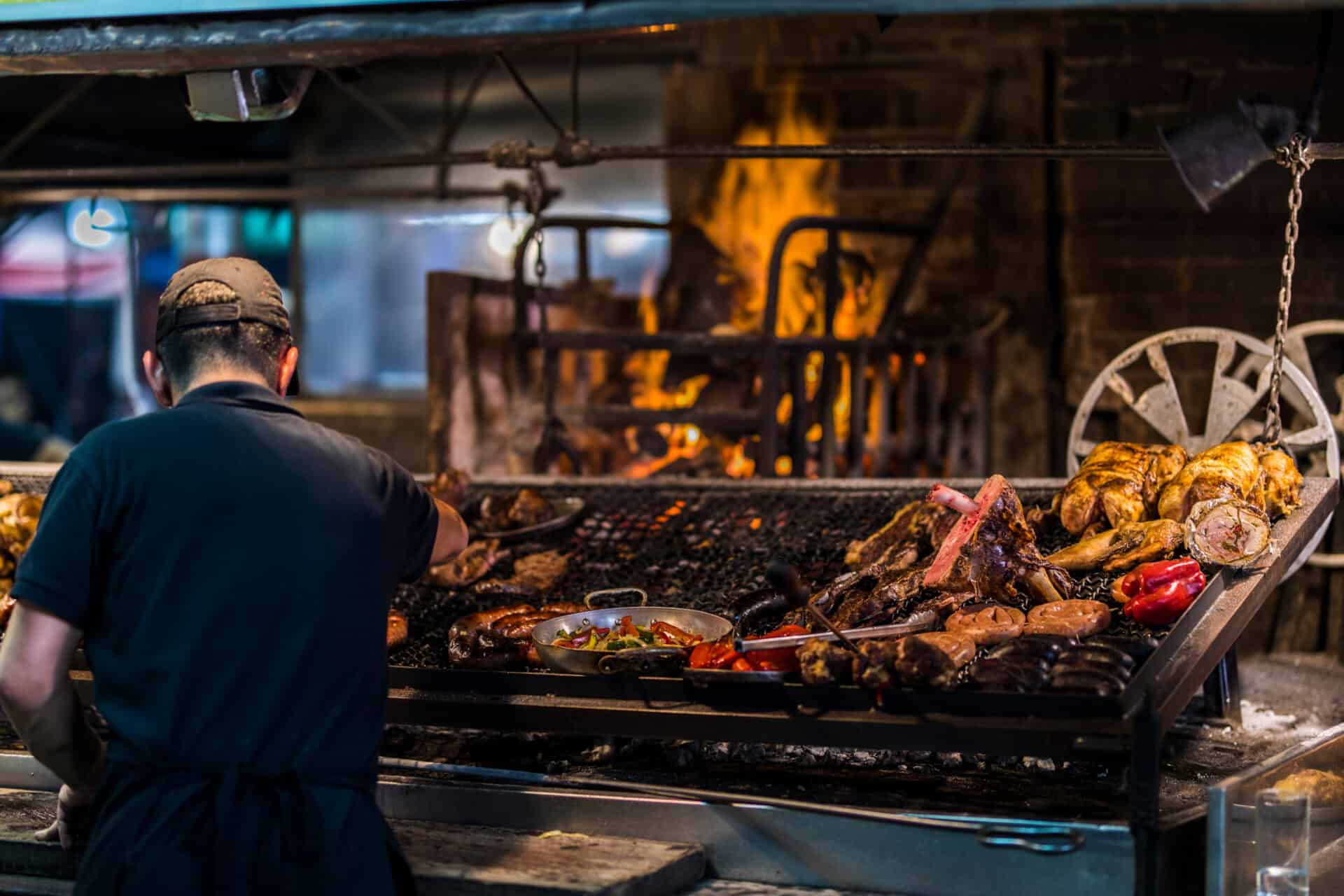 We hear a fair bit about South American cuisine, but Uruguay is a country that’s often missed.

Blending in Latin America and European influences, they have a wide variety of delicacies, from heart meat-heavy dishes to delicious pastries.

Let’s take a look at 16 popular Uruguayan dishes you simply must try. 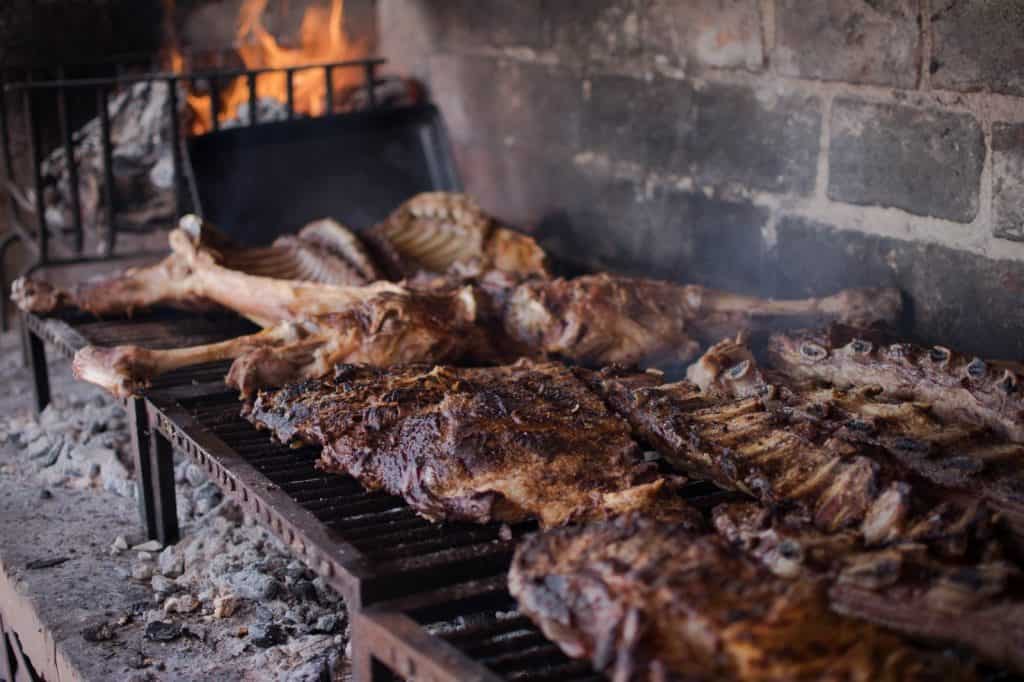 Nobody does barbecue like the Uruguayans. And we mean that literally because we’re not sure where else you can find barbecued innards. The Asado is various kinds of meats barbecued on a grill called the parillo. The parillo is a grill set up over a wood fire.

The barbecued meat is usually made up of mostly beef, but you’ll often find other types of meat like sausages, lamb, goat, pig, chicken, etc. The meat is usually served up piece by piece because of the difference in cook times. Asado is a traditional meal, usually served with bread, vegetables, and good old beer.

Asado is usually made at traditional restaurants and for events and parties.

A chivito is a meat sandwich commonly seen in Uruguayan restaurants. It won’t be too far off to call it the Uruguayan burger. This dish is recognized as a traditional Uruguayan sandwich.

When making this dish, quality meat is an absolute must. Other ingredients include lettuce, tomato, fried egg, cheese, cooked onions or bacon (optional), and of course, bread.

This sandwich is huge and can easily be shared among two or three people at once. When served up with some fries, it’s a full meal.

Churros are a relatively common fried pastry in South America. Uruguay shares these tasty snacks with other countries. However, there aren’t too many places where you can get a pastry as delicious as churros stuffed with dulce de leche.

Dulce de leche is a sweet, creamy sauce usually made with milk, vanilla, and sugar. The texture differs from batch to batch, but it’s generally quite thick.

Alfajors are another famous sweet in Uruguay. These deserts are one of the most common Uruguay foods so that they can be bought in stores.

However, you might want to invest in higher-quality alfajors sold in bakeries and pastry shops.

Fresh and well-made alfajors are moist and soft — in texture and consistency, they should resemble cakes. There are many different flavours, including one with a dulce de leche filling.

Quality differs depending on where you purchase your alfajors. But if it’s dry and crumbly, it’s probably not going to taste great. With alfajors, it’s usually true that the more you shell out, the higher the quality.

Empanadas are pretty standard across the Americas. You could say they’re one of Latin America’s exports, seeing how lots of countries have a variation of this tasty snack.

Empanadas are one of the Uruguay foods that the citizens have given a twist.

Empanadas are super simple to prepare. All you need is some dough, your filling of choice and an oven or a pan, and oil.

You can fill empanadas with anything, but minced meat, onions, and vegetables are common in Uruguay. You can also find empanadas with fillings of fish, apples, and even dulce de leche. Head to any pastry shop in Uruguay for a taste.

Here’s another one of the top foods in Uruguay — the tortas fritas. These tiny little things are little baked cakes.

You can find them at any street stand or certain restaurants in Uruguayan cities.  They’re typically enjoyed on rainy days.

Add these up to form a dough and then deep fry it. And you have your tortas fritas!

You can eat them with some cinnamon, powdered sugar, jam, or dulce de leche.

Fainá is a fried pastry said to be popularized by two Italian immigrants in the mid-1910s. The Italians do have something similar called the Farinata.

Over the years, Uruguayans have put their own spin on this dish.

Fainás are pastries made of chickpea flour. Specifically, it includes water, olive oil, pepper, and salt.

All of these ingredients are then mixed into a dough. The dough is cut in a triangular shape similar to pizza and fried.

Fainá is usually served as a topping for pizza. However, if you add some more pepper and a glass of wine, it can serve as a meal of its own.

If you’re in the country, choripán is one of the Uruguay foods you can’t afford to miss. Choripán is the Uruguayan spin on hot dogs.

Also, it is eaten in other countries like Argentina and Chile.

It’s made with one chorizo, a pork sausage that’s usually grilled, and some baguette bread. It’s also topped with foods like onions and tomatoes.

This is one of the top foods in Uruguay simply because it can be found anywhere. If you get hungry anywhere within a city, look for a food truck or stand and asked for a choripán.

Bizcochos are very popular in Uruguay, especially for breakfast. However, they’re quite difficult and time-consuming to make.

Then there’s the fact that no two bizcocho recipes are the same. Different bakeries make these pastries differently, and as a result, no two taste the same.

However, bizcochos can be seen in any bakery or pastry shop. They can be eaten in the morning or afternoon as a full breakfast or a snack.

There are salty and savoury types, while some have sweet sugar coatings or fillings.

This dish is famous for its heavy Italian influence. It’s said to have been created by one Uruguayan restaurant owner to impress Italian opera singer, Enrico Caruso.

The Caruso is a creamy sauce, rich with ham and mushrooms. This sauce is then eaten with pasta.

Parmesan cheese can be added for extra Italian flair.  This dish is also known as Pasta con Salsa Caruso.

While this is one of the most popular dishes in Uruguay, it’s super easy to make. There are only a few ingredients that you can get at any supermarket.

Arroz con Leche is a delicious rice pudding, usually eaten as a dessert. It’s a typical dish in many Uruguayan households.

This tasty, simple dessert is made with rice, millet, egg yolks, cinnamon, sugar, and vanilla. Most Uruguayan families have created their own versions, though.

This pudding can be served either warm or cold. And though it’s traditionally eaten as a dessert, you can eat it as a full meal.

If you want to add some extra sweetness, scoop in a spoonful of dulce de leche while it’s still hot.

Milanesa can be found in many Latin American countries. However, the unique Uruguayan twist gives it a special flavour.

Milanesa refers to a thin piece of meat that may be breaded or fried. The meat may be beef, chicken, or pork, but dishes in Uruguay are usually prepared with the meat the country’s known for — beef.

Milanesa can be served a la napolitana or en dos panes with a topping of tomato, ham, and cheese, or as a sandwich with mayonnaise and tomatoes. You can get a milanesa at any traditional restaurant.

We can’t say chajá is one of the top foods in Uruguay because it’s not as popular as it once was. However, it is one of Uruguay’s most traditional dishes, and you’ll probably see it at any gathering of older people.

The chajá is a light cake with a smooth texture. However, recipes for this cake vary between bakers, and some even refuse to share theirs.

We know that some recipes include dulce de leche, strawberries, eggs, syrup, and whipped cream.

Revuelto Gramajo is a dish produced in both Uruguay and Argentina, though the dish’s true origin is unclear. This food doesn’t have all that many ingredients.

It’s made with French fries, ham, eggs, bacon, butter, fried onions, and peas. It’s served in huge portions and is usually eaten with friends and family.

This food is famous for being delicious, but it is high in calories and saturated fats. So, take note of that if you have any health conditions that restrict your diet.

Martín Fierro is a dessert with a slightly sour taste. Its unique name comes from a character in one of the novels written by Argentinian author, Jose Hernandez.

Hernandez’s favourite dessert was an Argentinian version of the Martín Fierro, made with sweet potato paste instead of quince paste.

However, when he was exiled to Uruguay, he liked theirs better.

The Martín Fierro is made of quince paste and a local cheese called queso colonia. However, it can be made with any cheese and is super easy to store.

If you’re out of quint paste, you can substitute it with guava paste. The texture and bittersweet taste all add to the splendour of this simple dessert.

Pancho is the Uruguayan hot dog. They’re a little smaller than chorizos and have less flavour than them.

A pancho is usually served in a short piece of bread. Typical, the sausage may hang out from the bread at one or both ends because it’s longer than the bread.

An example of a type of pancho bread is the pan de Viena.

The taste of the pancho is mostly decided by the toppings. People use mustard, corn, onions, cheese, ketchup, and more.

You can also combine two or more toppings if you’re feeling up to it. Eat your pancho with a side of fries for a hearty meal.

Garrapiñadas are roasted peanuts. The peanuts are roasted in a syrup consisting of sugar, vanilla essence, and water.

You can make garrapiñada from walnuts or almonds as well. The nuts are done when they’re completely coated, and the syrup has hardened.

They’re then put in little bags and sold to customers on the streets of many Uruguayan cities.

Garrapiñadas are eaten as snacks by many. Though a traditionally Uruguayan food, the sale of garrapiñadas is so good that some vendors have expanded the business to Argentina.

Don’t forget to buy some of these when you visit Uruguay. They’re great for eating while on the go.