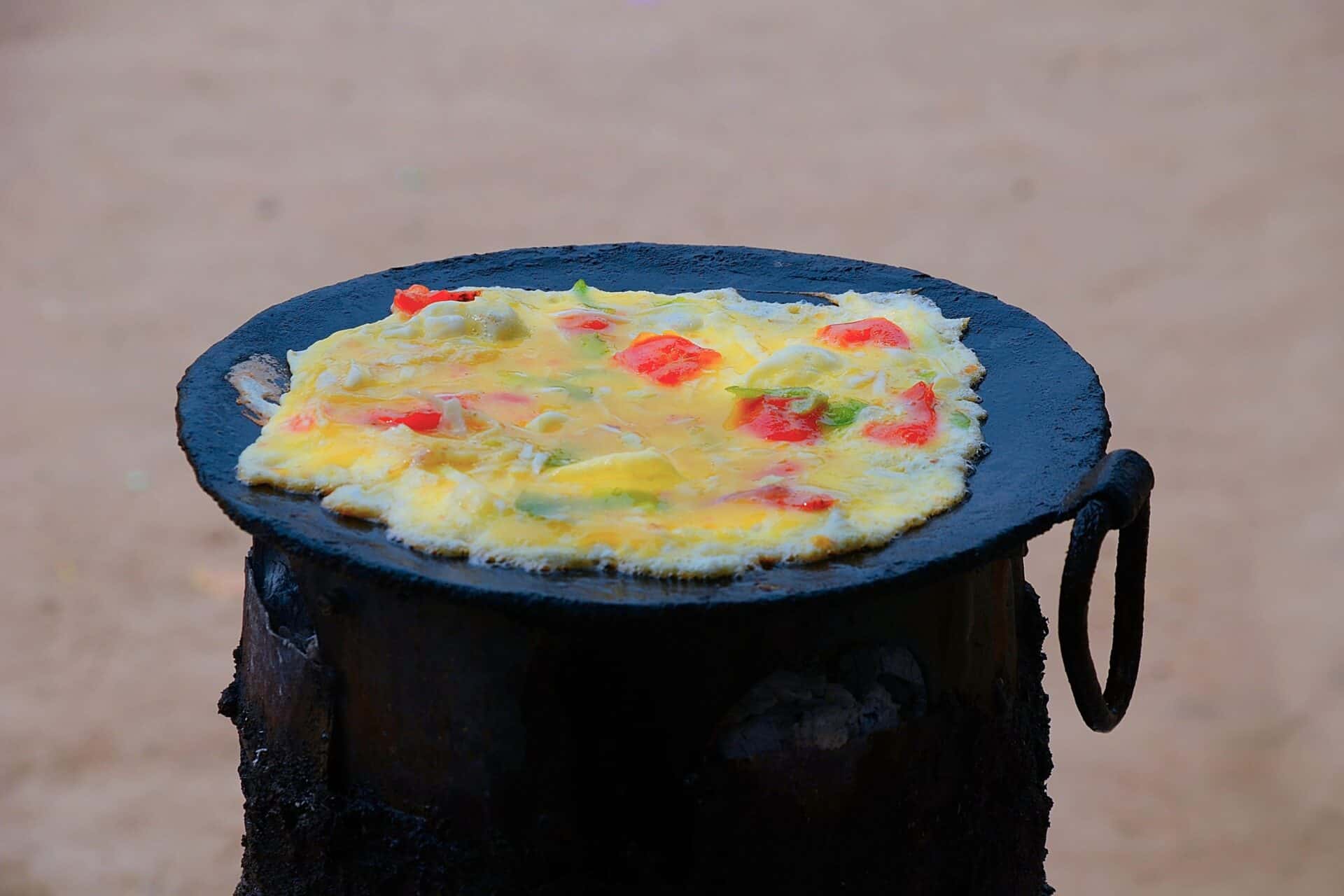 Sitting at something of a crossroads geographically and culturally, the cuisine of Uganda has adopted a myriad of different cooking styles and flavours.

A landlocked nation in East Africa surrounded by five other countries and the bulk of Lake Victoria, the continent’s biggest, Uganda has experienced the internal and external migration of peoples for thousands of years.

With the coming of the British, this also meant an influx of workers from the Indian subcontinent, adding these flavours to a growing list that include native, English, and even Middle Eastern delicacies.

If this has intrigued you into learning more about Uganda’s cuisine, then read on, as we unveil the tastiest traditional foods that come from the country. 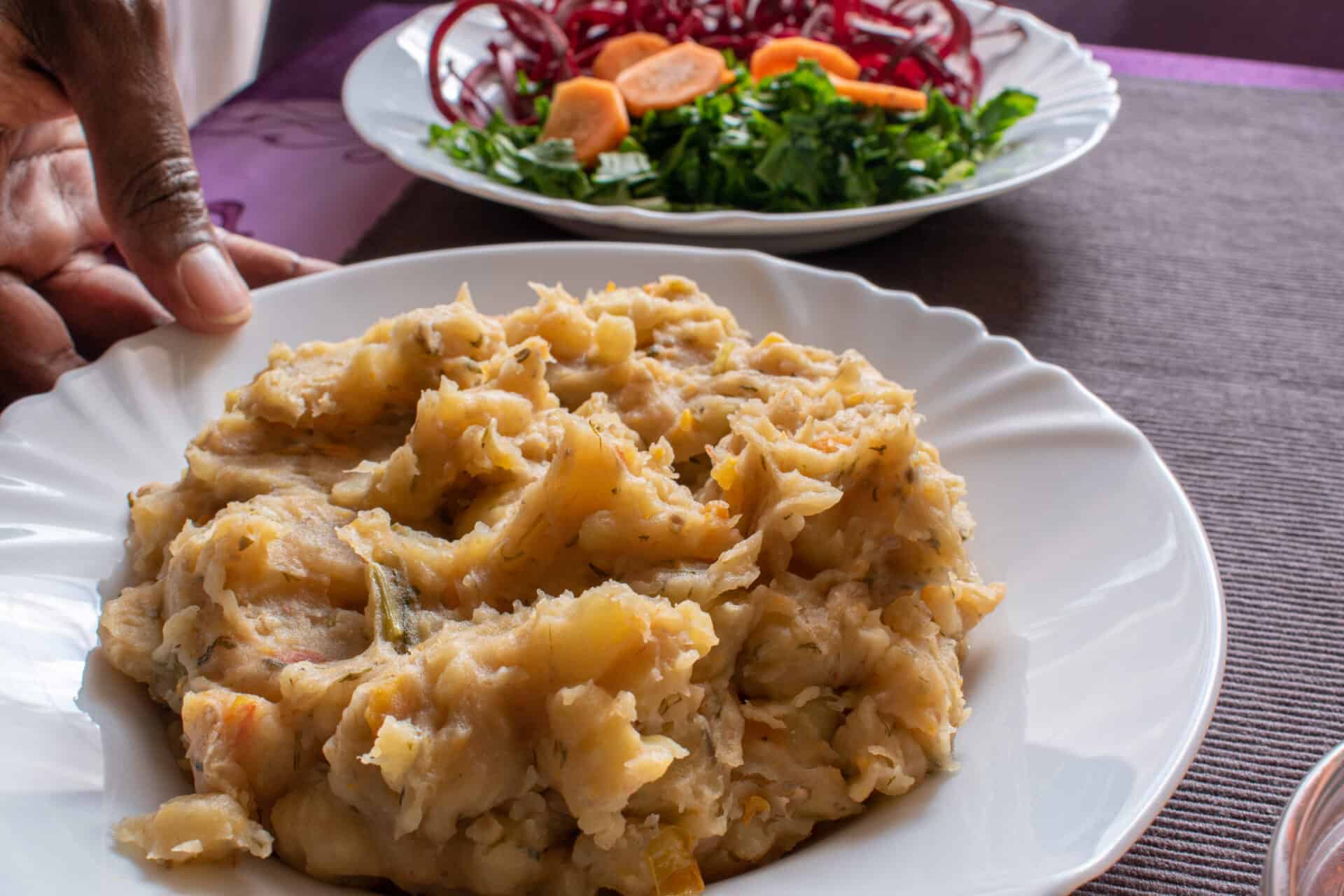 Found historically in the more tropical southern parts of Uganda, matooke is regarded by many as the country’s national dish.

Rather than being made from any kind of starch-rich flour, matooke is made from mashing and steaming the green banana – the East African highland banana, which are deliberately harvested from their trees while still green.

The steaming turns their hard, white fruit into a softer flesh with a cream or yellow colouring.

Matooke is also used to make the breakfast dish of katogo. In this dish, peeled matooke bananas are cooked with peanuts, chunks of beef, or offal (byenda).

Playing an important role in major ceremonies such as weddings and male circumcisions in this part of the country, malewa can be eaten simply on its own and raw, or steamed or boiled, as you might eat beef jerky.

Alternatively, it can be cooked into a sauce through the addition of sim-sim (sesame seeds) or ground peanuts.

The sauce is then served with matooke and similar carbohydrate rich sides common in Uganda, such as posho, which comes next in our list of traditional Ugandan dishes.

While not everyone’s cup of tea (or more correctly for Uganda, cup of chai), nsenene are as traditional a dish in the country as you can get.

The local Luganda word for bush cricket, nsenene are a much-prized delicacy in Uganda’s central and southwestern areas.

Traditionally they are plunked off the trees and grasses where they are feeding by women and children before being either dried or fried whole. They are then eaten straight up.

Even today nsenene can readily be found on market stalls in regions where they are normally consumed, sharing space with rice, tomatoes, and nswaa or white ants (termites).

A delicacy during the rainy season, nswaa are fried with onions and spices until warmed through, before being eaten on their own or with some form of starch.

Both nsenene and nswaa are bought by the gram or by the cup full. They have a nutty taste.

Posho is traditionally one of the main sources of carbohydrate energy in Uganda’s northern climes, and while minor differences in cooking techniques do exist, is a term used interchangeably with ugali and several other words used in the region such as kawunga.

As a result, posho can be held in a similar place to matooke on the Ugandan dining table, despite being a completely separate dish.

Made from maize meal (corn flour) almost entirely, the flour is stirred over heat with enough water to bind it together but not flood it, until it becomes firm. It can then be shaped into a rough block rather like thickened mash potato.

This block is cut into slices as individual portions, and eaten with the country’s sauces and stews, generally with the fingers, dipping small pieces of the posho into the sauce.

Posho can also be cooked into a thick porridge and eaten for breakfast. If it is made from millet instead of maize it is called kwon.

Mandazi is both a popular street snack and component of main meals in Uganda. A simple dish, mandazi is a form of deep-fried bread that has a sweet note through the addition of spices such as cardamom, making it similar to a doughnut or sweet beignet.

Coconut milk can also be used to add sweetness, in which case mandazi become mamri or mahamri.

During the cooking process, the mandazi take on the light airy texture of a doughnut, but are usually served as small triangular bites, as well as in rough circles.

As a snack, mandazi are commonly eaten with tea (chai), an important cultural ritual, or freshly-squeezed fruit juices. As part of a larger meal, mandazi take on a similar role to posho and matooke in acting as a stomach-filling vehicle for sauces.

Uganda’s most traditional drink is perhaps not chai, but pombe, a millet beer.

To begin the process of making pombe, millet seeds are soaked in warm water, which causes them to sprout, increasing the natural sugars needed for fermentation within them.

This growth stage is then stopped by drying the seeds out in the sun, so that the sugars aren’t used by the seeds themselves in growing larger.

When dry, the millet seeds are ground with a little water, boiled to kill off any bacteria, and then mixed with yeast to ferment the mixture over several more days.

Unfiltered, pombe has a thicker, more opaque appearance than factory-made lagers. As its manufacture is a cottage industry, its flavour and alcoholic content can vary widely.

Luwombo is the general name given to a stew that can contain anything from mushrooms to beef as a main component and source of protein.

However, most authentic recipes of luwombo insist chicken should be used in this dish. The meat is flavoured with local spices before being wrapped tightly in banana leaves to be steam cooked.

Its other main ingredients include peanuts and pieces of smoked fish, uniting to form a rich aroma and flavour profile.

Portions of browned meat, caramelized onions, some cooked tomatoes and the other ingredients are placed in the centre of a banana leaf, tied, and steamed for around an hour to ensure a slow, steady cook.

Groundnut, or peanut, stew is another consistently popular dish traditional to Uganda (as well as other countries in the region).

Unmistakable to anyone who has already enjoyed its thick almost gooey sauce, the stew is dominated by the strong flavours of the peanuts it contains.

Usually served with beef as the protein source, the richness of groundnut stew is eased by the addition of chopped onions, tomatoes, ginger and a good amount of chilli, although the dish should not be overly hot to the taste.

Like luwombo, groundnut stew is cooked slowly, simmering for several hours, allowing the meat to tenderize fully, and take on the wonderful peanut flavours.

The same flavours can be replicated using a couple of tablespoons of smooth peanut butter instead of crushed groundnuts, although aficionados will tell you the two are not comparable.

Seemingly taking its name from a conglomeration of ‘rolled eggs’, rolex owes much of its existence in Uganda to the migrant workers from India who settled in the country permanently during the rule of the British Empire.

A quick and inexpensive snack food, rolex are most likely to be found on the street, around busy junctions with a large footfall.

It consists of an egg omelette cooked with onion, tomato, and other vegetables that is then placed on top of a chapati and rolled together to form a basic wrap.

An alternative version of rolex is the kikomando, where the chapati is cut into pieces and served with fried beans. Chapatis are also used as a vehicle for many other foodstuffs, including sausages to create a sort of sausage roll.

While curry might not be immediately associated with Uganda or the African continent more generally, the dish has a long pedigree in Uganda.

Making its way to the country with Indian migrant workers, Ugandans enjoyed the hot spicy blend of sauce and meats that wasn’t dissimilar to indigenous dishes, and adopted the curry as one of their own.

Curried potatoes are one of the stars of Uganda’s curry repertoire. Onion, garlic and spices including turmeric, cinnamon and coriander are heated in a pan until the onions are soft and the spices release all their flavour.

Tomato puree and lemon juice are then added before the parboiled ‘Irish’ potatoes (rather than the sweet potato) are added and cooked until the potatoes are soft and the sauce is able to coat them.

Sim-sim is what Ugandans call the sesame seed. Sesame is used in a number of different traditional Ugandan dishes, often being ground into a powder and replacing peanuts in recipes.

Sim-sim sweets (candy) is one dish in which sesame is allowed to shine all on its own.

First, the sesame seeds are very lightly roasted in a pan to release their oils and create a light brown colour. Refined white sugar is then added to the pan, which remains on the heat until the sugar has become a liquid and can be mixed with the seeds

At this point, the mixture is taken off the heat and allowed to cool, either as a slab which is later broken into pieces, like peanut brittle, or rolled into small balls when cool enough to handle.

The result may not be as sweet as western candies, but they certainly are moreish!

Perhaps the easiest of all Ugandan foods to try is the samosa, which you will find being sold by street vendors on almost every road in the country.

Brought into the country in the same way as curry and chapatis, samosas are enjoyed by people of all economic statuses.

They can be both vegetarian or filled with minced meat, which is usually beef. In addition, these pastry-filled triangles are flavoured with local vegetables and spices before being deep-fried until golden brown.

Indian spices take a leading role in many Ugandan samosa recipes, so get your taste buds ready for the tang of garam masala, mustard seeds, cumin and coriander which are the backdrop to the snack.

Samosas will usually be served with a topping of a handful of fresh herbs, or a tomato chutney-type sauce.

Coming from the Swahili for ‘roasted meat’, muchomo is the Ugandan form of kebab or brochette.

Grilled over coals, these skewers of meat can be made from pork, beef, chicken or mutton.

Usually muchomo skewers come with no additional flavours or ingredients, so if you’re not a huge fan of chilli heat, this is a dish to go for – simply avoid the hot sauce when it’s offered to you.

Tender and therefore easy to chew and swallow, the flavour is further enhanced thanks to the crisp barbequed crust it is given by the coals.

Alongside muchomo is usually the option of some deep-fried plantain, so there’s no cutlery needed whatsoever to fully enjoy this dish.