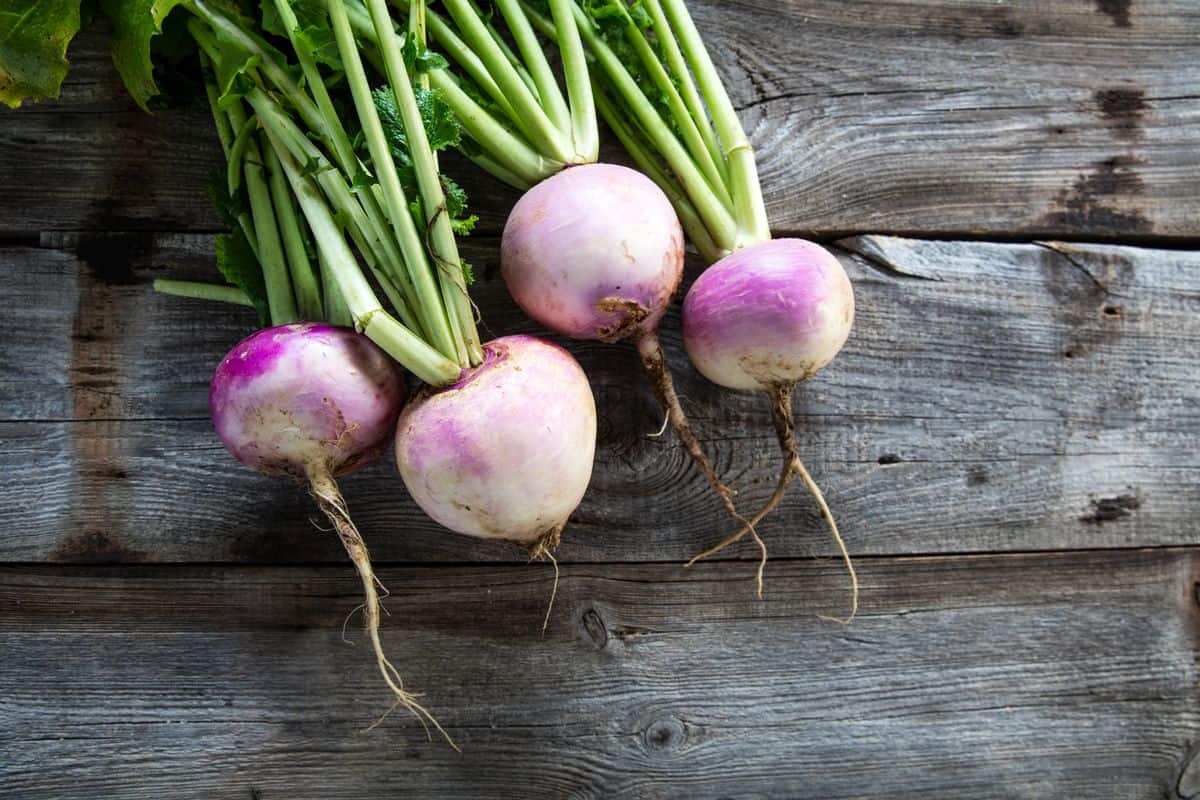 Turnips are cruciferous vegetables. They have a white body and a purple top.

Just like many other root vegetables, turnips have their peak from autumn till winter’s end.

Turnips are zero-waste crops because both the root and leaves can be eaten.

This article will cover what turnips taste like and common questions related to its taste.

This is a complicated question to answer. The flavours of turnips vary due to many factors.

Young turnips are crunchy, sweet and taste similar to carrots.

Older, mature turnips taste more like potatoes than anything else.

They tend to be bitter when they’re eaten raw but will smell and taste sweet if they’re cooked correctly.

If you cook them correctly, they’ll taste like beets without their earthiness.

Small turnips can taste like celery —tangy or sweet. Larger turnips tend to taste spicier and woodier. Don’t eat them without cooking.

Some people even think turnips taste like a cross between a cabbage and a radish.

Turnips have a variety of unique flavours, so it depends on the age of the turnip you eat, as well as how you cook it. 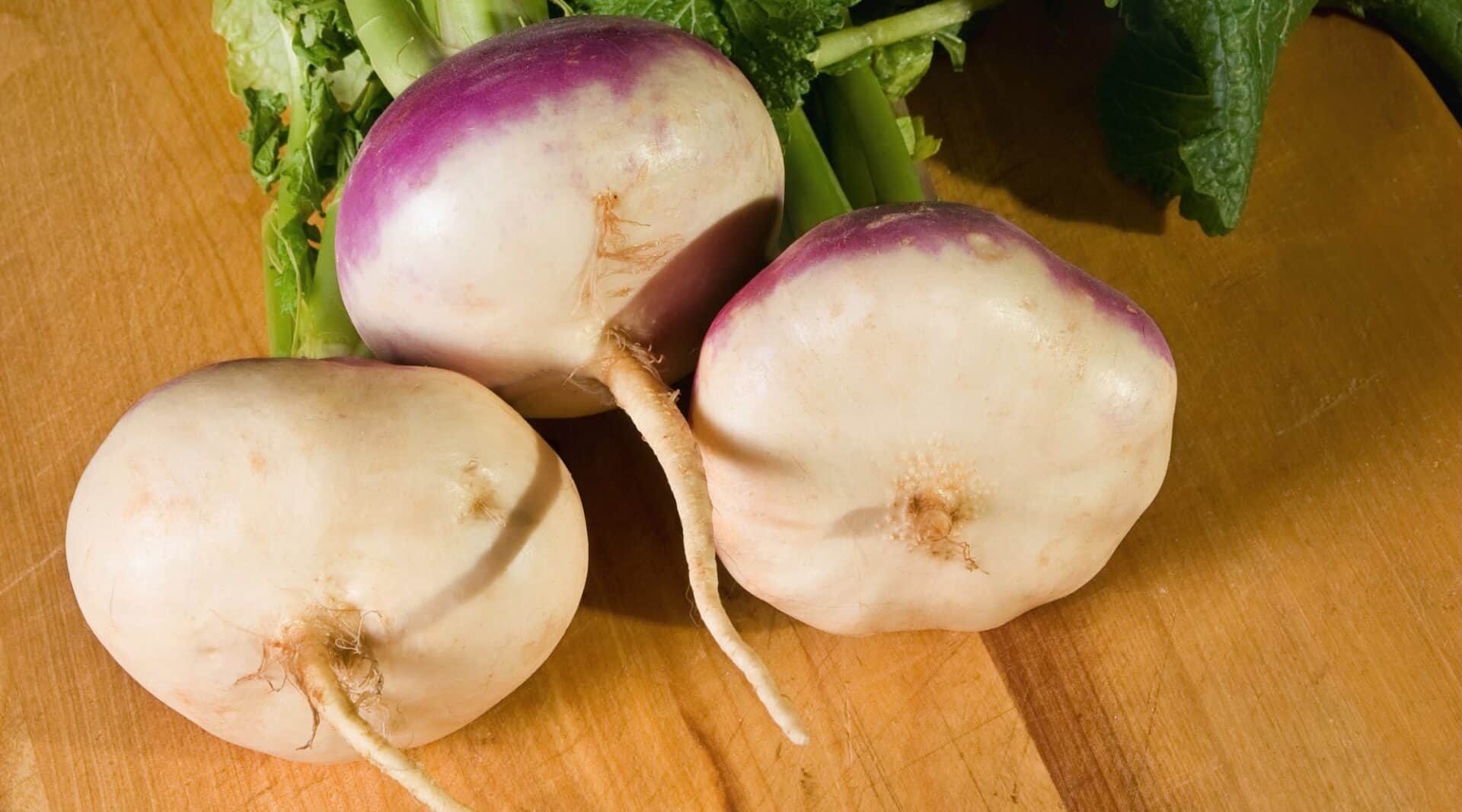 Not all turnips taste like potatoes. Older turnips are woodier and are often compared to potatoes.

Some people think turnips taste like a combination of a carrot and a potato.

Many people believe that turnips can be cooked the same way as potatoes since they have similar textures.

Although they don’t taste that much alike, turnips make great potato substitutes.

A lot of recipes also mix potatoes and turnips. This includes grating, mashing and roasting.

Do Parsnips and Turnips Taste the Same?

Turnips and parsnips are both root vegetables. However, they have completely different tastes and flavours.

Turnips are much spicier than parsnips, and they have different kinds of sweetness.

Parsnips are quite similar to carrots. In fact, they can be used to replace carrots in many recipes.

Parsnips have a candy-like taste. Some people even compare the taste of parsnips to anise.

Turnips, on the other hand, aren’t as sweet as parsnips, especially when they are mature.

Do Turnips and Rutabagas Taste the Same?

Turnips and rutabagas have quite similar flavours. They both belong to the plant family Brassica.

It is in fact, a popular belief that rutabagas are a hybrid of cabbage and turnip.

Rutabagas have yellow flesh and yellow skin with hints of purple. Turnips have white flesh with white and purple or just white skin.

Both turnips and rutabagas have a mild, sweet and earthy flavour that kind of reminds you of a cabbage. This is mostly because cabbage also belongs to the Brassica family.

Both rutabagas and turnips have edible leaves.

They generally taste quite similar. But bigger rutabagas don’t have the bitter and woody taste that mature turnips have.

How to Make Turnips Taste Good

There are many different ways to make turnips taste good. This includes mashing, grating, sautéing, and roasting with added spices.

Here are a few ways to make your turnips taste good:

A pretty straightforward way to make your turnip good is to boil it with salt and water.

It tastes similar to boiled potatoes with this method and you can eat it with any topping or alone.

You can roast your turnips with olive oil and sweet, pungent spices like rosemary or citrus.

Turnips tend to caramelise when you roast them uncovered. You can add honey or maple syrup to give it a better glaze.

Besides, roasting helps to bring out the flavour of turnips. You can also make mashed turnips to get a tasty and healthy meal.

The first thing to do is to boil your peeled and chopped turnip with potatoes.

Once it’s ready, drain it and add milk (or butter), pepper and salt. After adding these ingredients, mash the mixture.

You could also add a little bacon and cream cheese for more flavour.

You can sauté your turnip with other vegetables in olive oil. It is a healthy meal that is also super tasty!

You could also add turnips to stews and soups that contain other vegetables.

If you have small or young turnips, you can shred or grate them and mix them with homemade coleslaw.

You can julienne your turnips. Turnips are amazing garnishes for any meal. All you have to do is cut them into thin slices and garnish!

You can use turnip leaves —or greens as they’re also called— instead of collard greens or cooked spinach.

They taste delightful when steamed or sautéed as a side dish with onion, lemon, garlic and olive oil.

You could also add turnip greens to soups, pasta or stews.

You can make turnip gratin with your turnips. The first thing to do is to slice your peeled turnips and put them in a baking dish.

Sprinkle cheese, herbs, cream and butter over the turnips and bake in a hot oven until the cream almost bubbles over.

Can you Eat Raw Turnips?

It is more advisable to eat smaller and younger turnips raw. This is because mature turnips tend to be bitter when eaten that way.

They taste like the juicier version of carrots with a little tang that complements the sweetness beautifully.

If you want to eat your turnips raw, you can peel them and drizzle with olive oil.

You can also peel and slice the turnip just like an apple and eat it with dips. You can also add them to your raw salads.

Make sure you slice the root end off and remove the leaves —which you can use to cook.

Can you Freeze Turnips?

Of course, you can!

Turnips are root vegetables that are bountiful during the cold months —they’re harvested between late fall and late winter.

You can freeze turnips according to the instructions below:

You can substitute turnips with many vegetables which include the following:

These are thin-skinned, tubular root vegetables that are a part of the sunflower family.

They are usually mistaken for Jerusalem artichokes, although they are completely different.

Their taste is quite different from the Jerusalem artichokes; in fact, sunchokes taste more like potatoes than anything.

This is mainly because of the way they’re grown (underground) and their earthy flavour.

Water chestnuts are from Southeast Asia and have been grown in China for centuries.

The water chestnut is not a chestnut at all. The name comes from the plant’s resemblance to chestnuts, both with its colour and shape.

Water chestnuts have brown skin and white flesh, but they’re actually aquatic tubers. They’re the root-like part of a plant that grows in freshwater marshes.

Jicama is a root vegetable with golden-brown skin and white flesh.

Jicama is the globe-shaped root of a plant that produces beans like lima beans. The only difference is, the jicama plant’s beans are quite toxic.

You can also replace turnips with rutabagas, parsnips or daikon.

Taste them and you’ll find out that they have a mild, sweet and pungent flavour with slightly bitter and spicy undertones.

Turnip has a crunchy texture just like carrots, but mature turnips are less crisp and have a woodier texture.

Not everyone will like the taste of turnips, but they are healthy vegetables and we suggest you try them at least once before forming an opinion.