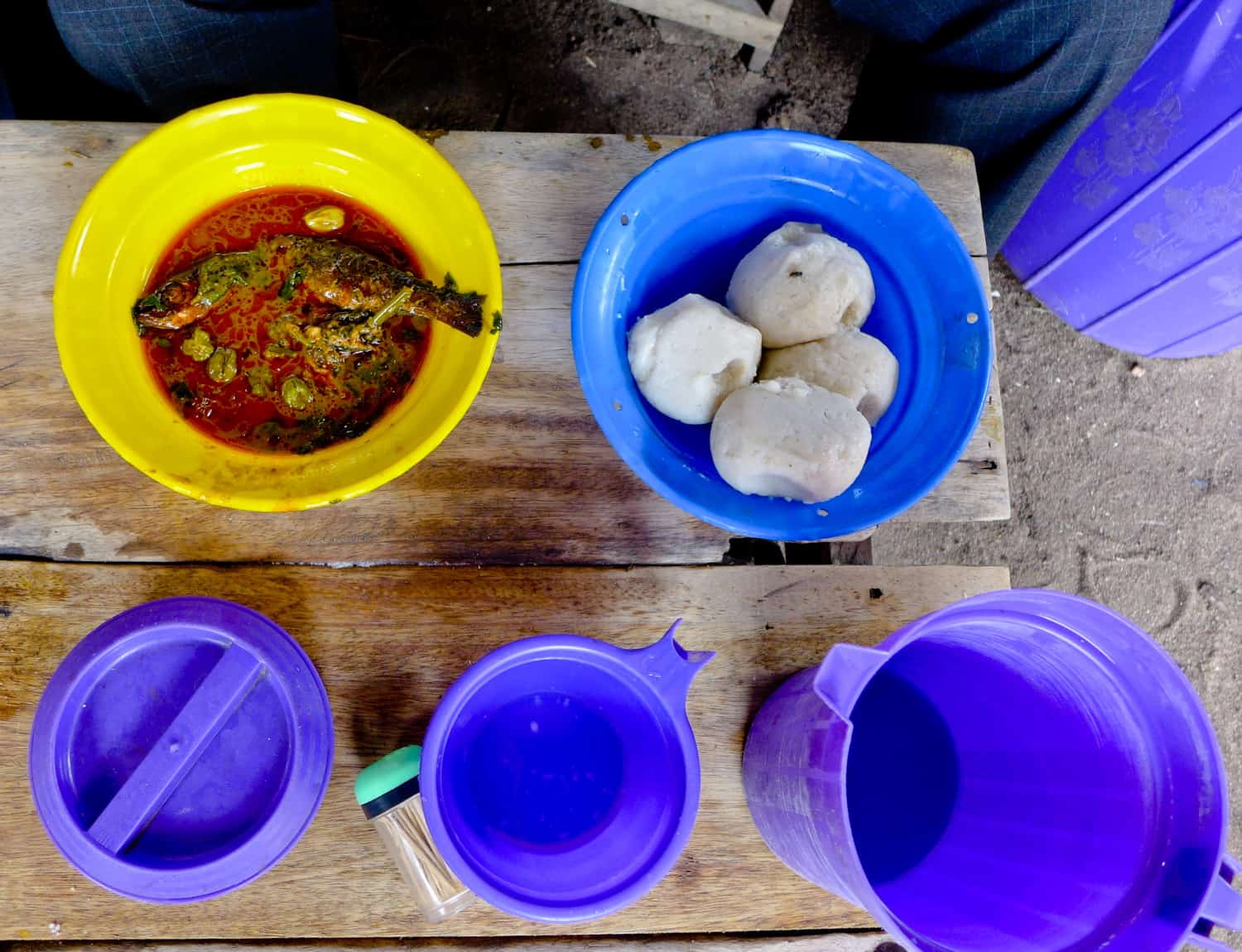 Just 70 miles wide, the West African state of Togo sits on the Atlantic Ocean between Ghana to the west and Benin to the east.

Like many of the countries in the region, Togo’s population of around eight million people is made up of a collective of tribes that straddle either side of its modern-day borders.

Due to its narrowness and the fact Togo is home to more than 30 different tribal groupings, culinary influences have come and gone across its borders for centuries.

In addition, colonisation by European forces has also played a role. While the influence of the country’s short German period of rule may no longer be particularly evident beyond its lagers, the French had a huge influence on Togo’s cuisine while they administered the country.

Here are the top traditional foods from Togo to look out for. 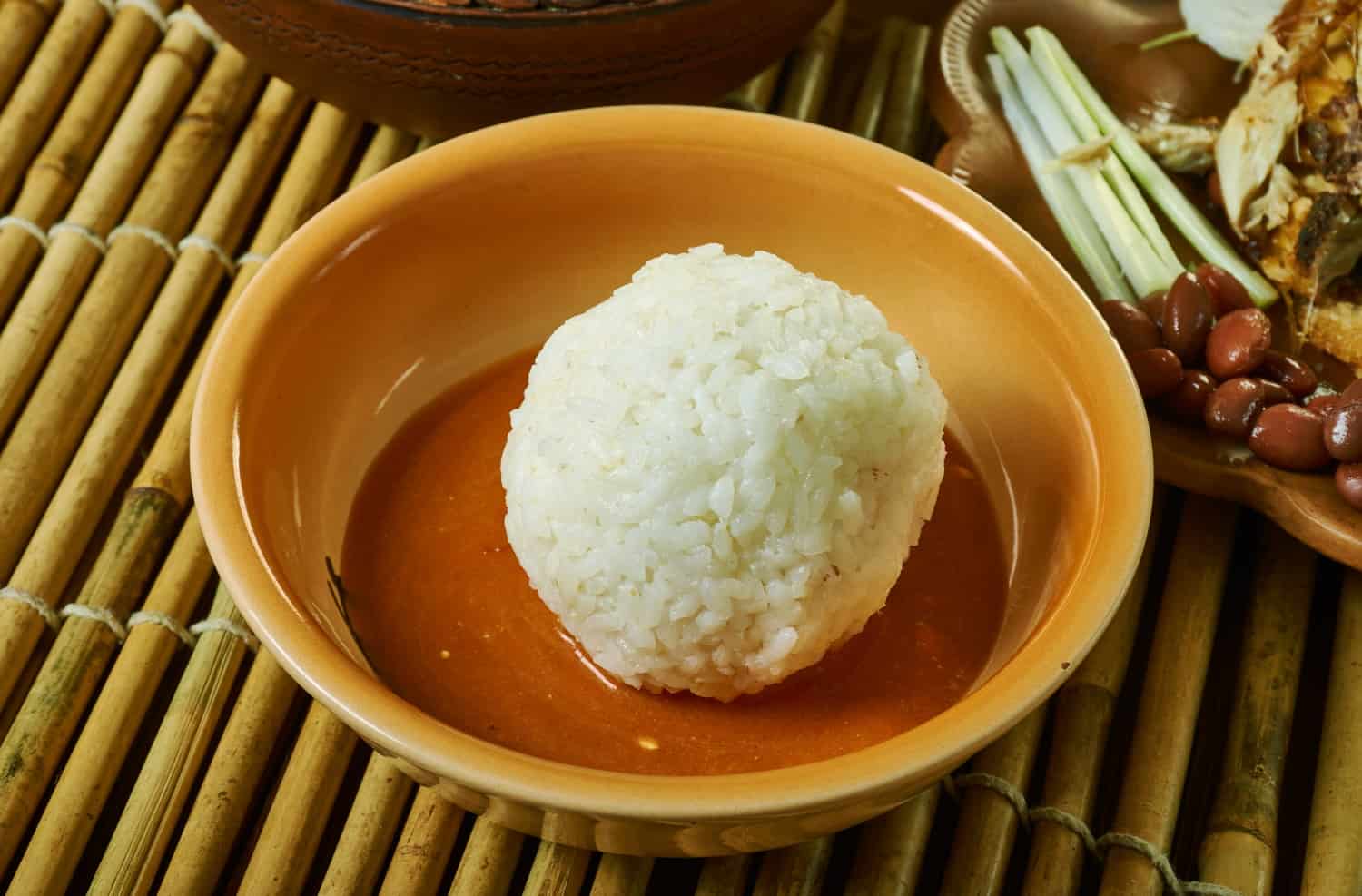 The groundnut, or peanut, is a staple crop in Togo, and used to make several traditional dishes as a result. One of the most common is groundnut soup.

While peanuts ground into a paste like crunchy peanut butter are the main ingredient and primary taste, the soup also contains a powerful kick of uziza seeds (a native shrub related to black pepper), and bitter leaf. This is the regional equivalent to spinach, with a slight bitterness to its taste.

The soup gets further punch from the addition of fresh ginger, which is softened in potency by other ingredients that include onion, tomatoes, aubergine and okra. Left to simmer, the soup becomes richly infused with all of these flavours.

Served with groundnut soup and many more of Togo’s traditional dishes, fufu is a side dish with the look and general consistency of uncooked dough, being slightly elastic but also soft on the palate when eaten.

Its taste is mild, and sometimes a little sour to western tastes, depending on what the fufu has been made from. It is usually dipped into soups or sauces, and its from these that fufu adopts most of its flavour.

Fufu is made by pounding down a number of the region’s staple crops. Most usually it is made from cassava tubers, but semolina (coarse wheat flour) and maize (corn) can also be used.

Often fufu in Togo is a blend of cassava and green plantain. The crops are mixed with a little water to form the dough-like texture, and served warm with meals throughout the day.

Togo is not known for its desserts, which usually consist of fresh tropical fruits such as pineapple, banana, or mango.

However, if you walk along the streets of any town in the country, you’re likely to come across small sachets of what look like frozen milk.

Known as akpan or akassa, these sachets actually contain a type of fermented maize yogurt enjoyed in both Togo and Benin.

Akpan is made by combining fermented corn kernels or their powder with condensed milk and ice. To enjoy it, Togolese simply make a tear in the plastic of the sachet with their teeth, and suck the akpan directly into their mouths.

Their French name indicates the origins of brochettes far better than anything else could.

Easy to find on the streets alongside akpan, brochettes are what many people would describe as a kebab. They consist of pieces of meat or fish fed onto a metal skewer and barbequed over hot coals.

Brochettes form an inexpensive street food, but also make a regular appearance on the menus of restaurants throughout the country.

Usually red meats such as mutton, goat, or beef are used, so that the natural fats within the meats make them tender and succulent. Pork is less common because of the population of Muslims in the country.

The pieces of meat on the skewers are sometimes accompanied by chunks of onion. Brochettes also normal come served topped with a chilli powder or hot sauce.

Gboma dessi is a main dish combining meats with leafy greens in a stewing sauce with a tomato base.

It is normally prepared using chicken, as this is probably the most common animal protein eaten in Togo after fish.

In its most authentic versions, the chicken is cooked slowly in water with roughly chopped onions, carrots, and celery. Only then is the chicken seasoned with spices including ajowan, cardamom, ginger and nutmeg, and fried to brown the meat.

The liquid in which the chicken was initially cooked forms the basis of the sauce by adding tomatoes or tomato paste and then the leafy greens so that they wilt down.

Of the region’s many dishes, jollof rice is likely to be the one best known around the world thanks to decades of migration. And while it is most often connected to nearby Nigeria, it is also a traditional dish of Togo’s.

For those who don’t know, jollof rice is a one-pot dish which sees rice cooked alongside spices such as scotch bonnet peppers, curry powder, and nutmeg. To this, local vegetables such as onions, tomatoes and bell peppers are added.

The dish’s recognisable yellow-orange colouring is the result of using tomato puree and a stock cube. The dish can be served in its vegetarian form, but will also often have chicken, fish, or beef included.

Akara is a savoury doughnut or fritter made from the cowpea. The peas are cooked first, so that they are soft to the touch, and then mashed into a paste.

The paste is given salt to season it, and small pieces of chopped onion. It is shaped into flattened spheres and deep-fried in oil. Traditionally this would have been the native palm oil, with its red tinge.

It is believed that akara developed among the Yoruba people of Nigeria before spreading across West Africa. Here akara had a symbolic role in mourning the death of an elder, and as a sign of victory in battle.

Popular at breakfast, this is when you’ll find akara at their freshest, although they are cooked throughout the day as a snack food too.

Koklo meme is Togo’s variant of grilled chicken. As we’ve already mentioned, chicken is a common source of protein in the country, especially away from the Atlantic Coast, so it should be no surprise that such a dish exists.

Koklo meme is usually prepared with the legs of the chicken, since breasts tend to dry out. Placed on a grill over an open flame until cooked through, the meat takes on a smoky flavour. When at their best, the drumsticks remain full of their natural juices too.

Marinated with ginger and garlic beforehand, these flavours are enhanced further by adding a chilli sauce after grilling. It’s normally drizzled over the legs, but can also be served on the side.

Simply translating from the French as ‘peanut sauce rice’, that’s pretty much the backbone of this dish explained.

While the rice is cooking, a thick oily sauce is made by grinding down peanuts in a pestle and mortar. When the rice is ready and has been drained, the sauce is poured on top.

Filling enough in itself due to the fat content of the peanuts, showier versions of this dish, such as those you’ll find in restaurants, tend to incorporate some meat.

Palm oil is not the only foodstuff in Togo to come from the oil palm. The tree’s fruit is also made use of in the preparation of palm nut soup.

Although known as palm nut soup, in fact it is the flesh or pulp of the fruit that is used here. This is simmered slowly in a large cooking pot with protein (often fresh or smoked fish), a blend of spices including paprika, and leafy greens.

The result is a liquid soup with a strong red colouring that goes very well with staples such as fufu.

Jus de bissap is a drink made from the dried petals of a particular type of hibiscus flower known as roselle.

The petals are infused with sugar water, and so the resulting drink is not technically a juice, but an infusion, although this makes it no less enjoyable.

A dark purple in colour, its taste is most often compared to grape juice combined with cranberry juice. Served chilled when possible, it can be served with mint leaves, as well as orange flower water and vanilla.

Sodabe is a palm wine or palm spirit. It is made by first fermenting the natural sugars found in the whitish sap of the palms, and then distilling the resulting concoction. Various species of palm can be tapped, including coconuts and oil palms.

The fermentation process can take as little as two hours, and is generally entrusted to natural yeasts in the air, rather than adding yeasts to the liquid as would happen in a large-scale brewery.

Distillation concentrates the alcohol produced, upping its volume from around 4% to anywhere in the region of 40%.

Palm wine has a taste all of its own, which is in turn sweet and also nutty. It has a white opaque appearance, and can feel quite syrupy on the tongue.

Ablo is an accompaniment to stews and meat dishes with a lot of similarities to fufu, although in poorer areas it is eaten alone as the main meal with a dipping sauce to provide flavour.

Ablo is made from a mixture of corn flour and corn meal (a roughly-ground corn flour). These ingredients are combined with water and brought to the boil. Sugar and yeast are then added in addition to more water.

The yeast is next given time to activate, with the dough that has formed rising as it proves. Finally, the dough is steamed and ready to serve. It is considered a staple of the breakfast table.

Originating further west in Senegal’s Casamance region, Yassa has also been taken into the hearts (and stomachs) of the Togolese, and is a regular offering in restaurants in the country.

It probably became popular here because it shares many common ingredients to those found in Togo. At the same time, yassa is one of those dishes that changes slightly dependent upon the chef cooking it, with no fixed recipe agreed on.

Fiery with spicy heat, yassa comprises marinated chicken (or sometimes fish) heaped with caramelized onions. Its accompanying sauce has a zestiness that comes from using lemon juice which both compliments and lifts the dish, while the heat comes from a hot variety of chilli pepper.

The chicken and onions are first marinated with the lemon juice and some mustard, and then browned in a pan, preventing the juices from escaping while they cook. The onions and chicken are then placed in a pot with the chilli still whole, and put into the oven to fully cook through, so that the chicken falls from the bone and the onions are sweet.

Yassa is usually served with rice.

Djenkoume is another common traditional side dish in Togo. Made from corn meal, it is a moist cake with similarities in texture to polenta.

However, unlike polenta, djenkoume has a definite taste of its own, since it is flavoured with ingredients that range from tomatoes to onion, garlic, and ginger.

These other ingredients are grated or chopped finely and cooked down in a pan until they begin to form into a thick sauce. At this point water or stock is poured into the pan followed quickly by the corn meal. Alternative recipes use coconut milk instead of water or stock, creating an even richer cake.

The corn meal absorbs the liquid to give the semi-solid texture you’re looking for after it has been heated through for around ten minutes, at which point the djenkoume is ready to eat.