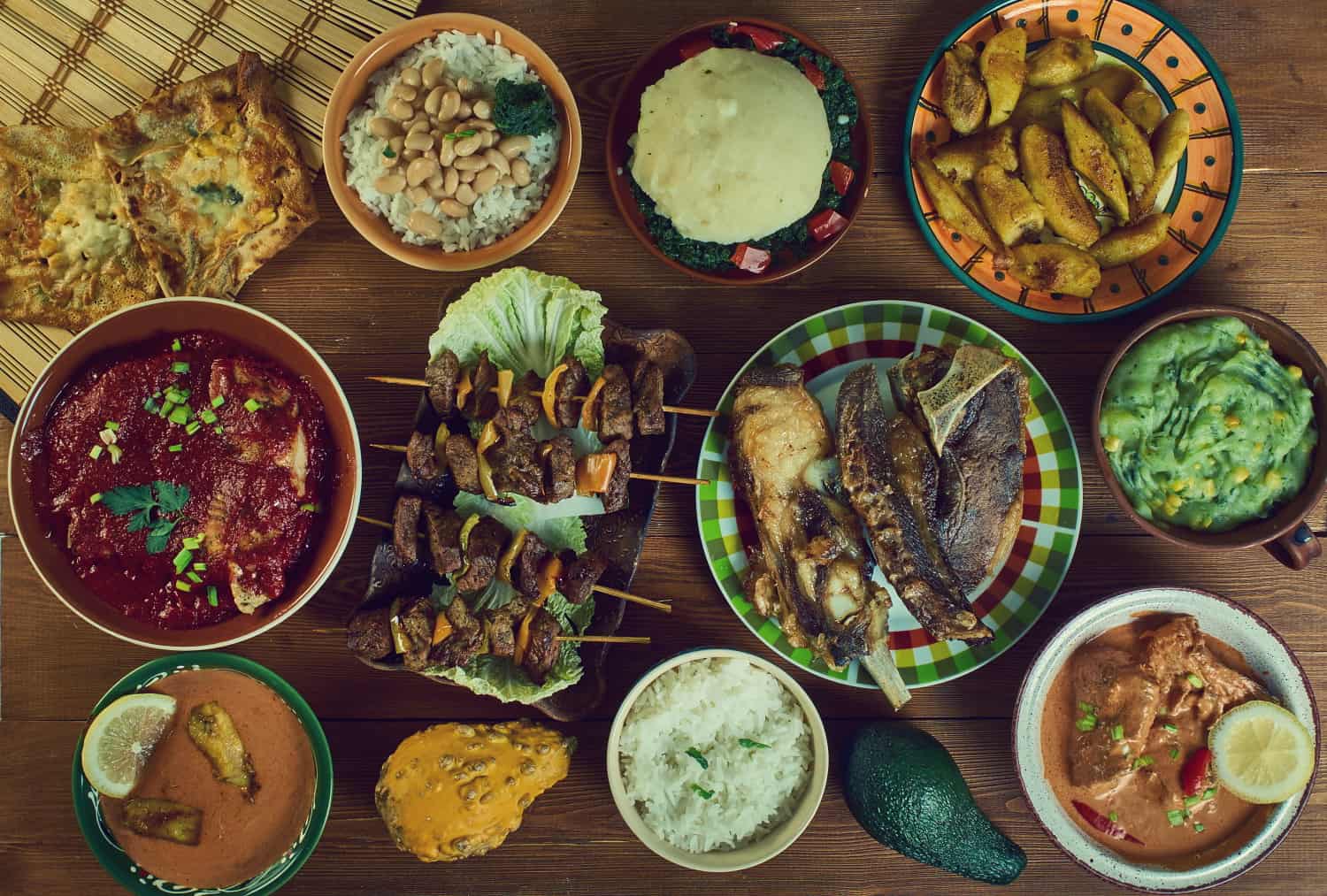 Tanzanian cuisine has been influenced over decades, if not centuries, by a wide range of internal and external factors.

This means that as well as East African staples, eaten in particular in the country’s inland regions, it has also developed its own form of Afro-Indian cuisine.

This came about after large numbers of Indian labourers were brought to Tanzania during the colonial period. As a result, it’s not uncommon to see ingredients including coconut milk, subcontinental spices, and Indian-style flatbreads.

The country’s long Indian Ocean coastline means fish is a popular protein source here, while it’s also fair to say that the British had subtler influences on the country’s traditional foods during their rule of the country.

Here’s our guide to the tastiest of Tanzania’s traditional dishes. 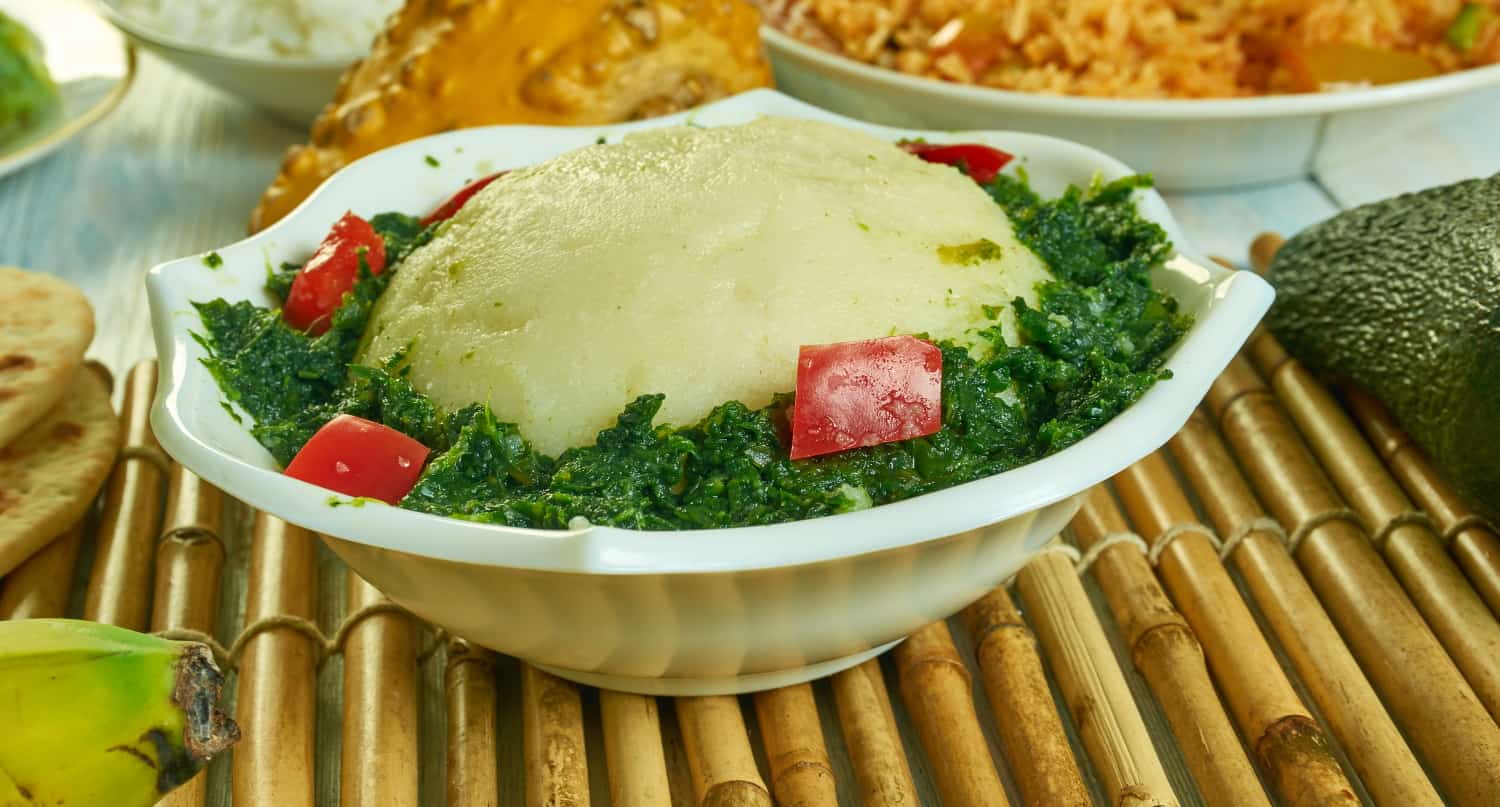 Perhaps the most readily available and most widely eaten of any Tanzanian dish is ugali. It has an appearance similar to mashed potato, however ugali is actually a form of maize flour ‘porridge’ or gruel.

Ugali has a much firmer texture than European gruels, and has a consistency close to uncooked bread dough.

The maize flour is boiled with water or milk until it is able to form into a ball. Alone, ugali tastes of very little, and is therefore used as a carrier for other dishes.

Used as a side dish to all manner of soups and stews, small pieces of ugali are pulled off the main ball with the fingers of one hand and dipped into sauces and stews.

The tradition of cattle herding in Tanzania means that while meat might not appear in every dish to come from its kitchens, it is a popular and much desired ingredient, showing a family’s wealth and high-standing in society.

No dish demonstrates this better than nyama choma, which can be translated from the country’s primary language – Kiswahili – as ‘barbequed meat’.

While beef can be used, traditional nyama choma is prepared using goat meat. To cook it, large joints are placed on a grill over an open flame and simply left there until the meat is succulent and can be stripped from the bone with a diner’s fingers.

Generally speaking, additional flavourings are left to a minimum of just salt and pepper. Some chefs add marinades of onion, garlic, and lemon juice.

Served with ugali among other accompaniments, the resulting nyama choma is quite greasy with the meat’s natural fat content, providing much of the dish’s flavour.

Popular not only in Tanzania but also in neighbouring countries including Kenya and Rwanda, kachumbari is a fresh, uncooked salad consisting of chopped tomatoes and onions.

These main ingredients are brought alive by the addition of chilli peppers. Rarely eaten alone, kachumbari is a favourite accompaniment to nyama choma and ugali.

Kachumbari reached Kiswahili by way of India, and comes from the word for cachumber, a very similar form of salad still found in India.

While street-side stalls in Tanzania will most likely create the most simplistic form as already described, restaurants and families looking to impress might also add a series of other ingredients.

These can include herbs such as coriander and parsley for extra freshness, and other vegetables common in the country such as cucumbers.

Mchuzi wa samaki, or curry with fish, entered Tanzanian cuisine by way of Zanzibar, and has become popular all along the country’s Indian Ocean coastline.

The sauce for this curry uses a base of coconut milk, to which tamarind paste, garam masala and garlic are added.

Tomatoes and onions provide vegetable freshness, while the whole dish remains light and flavourful. Pretty much any white fish can be used, although tilapia is favoured due to the fact it is so common in the region.

The fish can also be replaced with shrimp, which grow in certain areas of local coastline.

Although British rule doesn’t seem to have brought too many quintessential British flavours to Tanzania’s traditional cuisine, chipsi mayai is surely a rare exception.

Meaning ‘egg and chips’, or ‘egg and French fries’, chipsi mayai is an omelette packed full of pre-cooked chips.

A common dish found in street-side restaurants in Tanzania’s big cities, it is also known by some as zege.

Chipsi mayai makes for a cheap and filling lunch for the country’s workers, and frequently comes served with a small helping of kachumbari salad.

The world has no shortage of doughnut-like confections, and Tanzania is no different.

Mandazi (or maandazi) originated on Tanzania’s coast, and have a subtle sweet taste to their soft doughy interiors and golden-brown exteriors.

Usually left without filling, and without glazing, bakeries are starting to sprinkle some sugar over their surface as the influence of television and travel changes tastes.

Eaten hot and cold, mandazi are eaten not just as a sweet snack food or dessert, but also for breakfast and as part of an evening meal instead of breads or potatoes.

Sometimes the sweetness comes from coconut milk, in which case the mandazi are referred to as mahamri.

Both bananas and plantain, the cooking banana, are common staples in Tanzania, and it wouldn’t be possible to comprise a list of traditional Tanzanian dishes without mentioning one or other of these fruits at some point.

To some degree bananas and plantain are used as interchangeable words, so ndizi na nyama, or ‘bananas and meat’ can be made with either.

However, chefs preparing this dish don’t want ripe bananas, but the greenest, stiffest fruits they can find, so that they hold their shape during the cooking process.

The meat aspect of ndizi na nyama is usually fulfilled with pieces of beef. To this are added coconut milk, onions, and tomatoes, rather like in mchuwi wa samaki.

The silky-smooth coconut milk is flavoured with a huge range of spices, including curry powder, cumin, cayenne pepper and turmeric. The result is a sauce that is rich in flavour, but not overly hot when it comes to chilli heat.

Mchichi crosses the boundary between the foods of Tanzania’s indigenous peoples and the culinary influences that arrived from India during the colonial era.

A vegetarian dish, mchicha is a thick sauce made by combining coconut milk, homemade peanut (groundnut) butter, tomatoes, and onions.

To this mix are added leafy greens such as spinach and amaranth leaves which wilt down rapidly in the warm sauce.

It can be finished by adding small pieces of shredded coconut, which gives the sauce a bitty though not unpleasant texture. For a fuller meal, beans can also be added to the spinach and sauce.

Mishkaki tend to appear on street corners around nightfall, when open fires are all the more obvious against the dark.

Smoky in flavour because of the way they are grilled using bare flames, mishkaki are meat skewers or kebabs.

Beef is the most common meat used, with bite-sized chunks of the meat threaded onto wooden skewers in between pieces of onion or bell pepper.

Succulent and covered in a blend of hot spices, barbeque lovers with adore mishkaki.