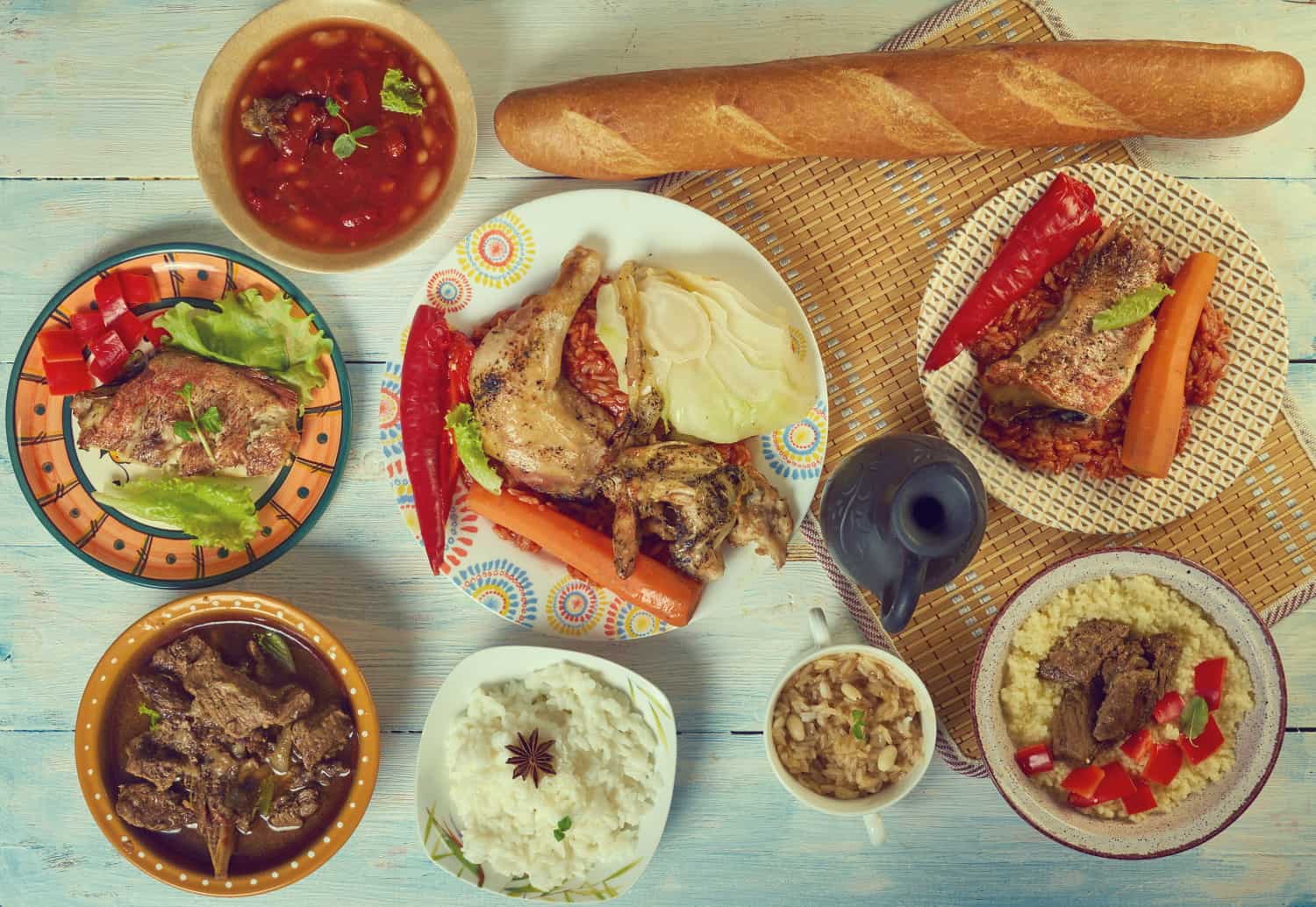 Senegal’s location in Africa has placed it at a crossroads of cultures for centuries, meaning its cuisine has adopted and adapted flavours from right across the Old World.

Acting as an unofficial border between the Sahara’s Sahel region and West Africa proper, influences have extended down from North Africa and incorporate many of the traditions of Islam, the country’s main religion.

Senegal has also taken influences from its time as a part of French West Africa, while the predominant indigenous flavours derive from the powerful Wolof people.

Situated on the Atlantic Ocean and dominated by rivers, seafood is an important part of the diet to this day.

Let’s check out the best dishes from Senegal. 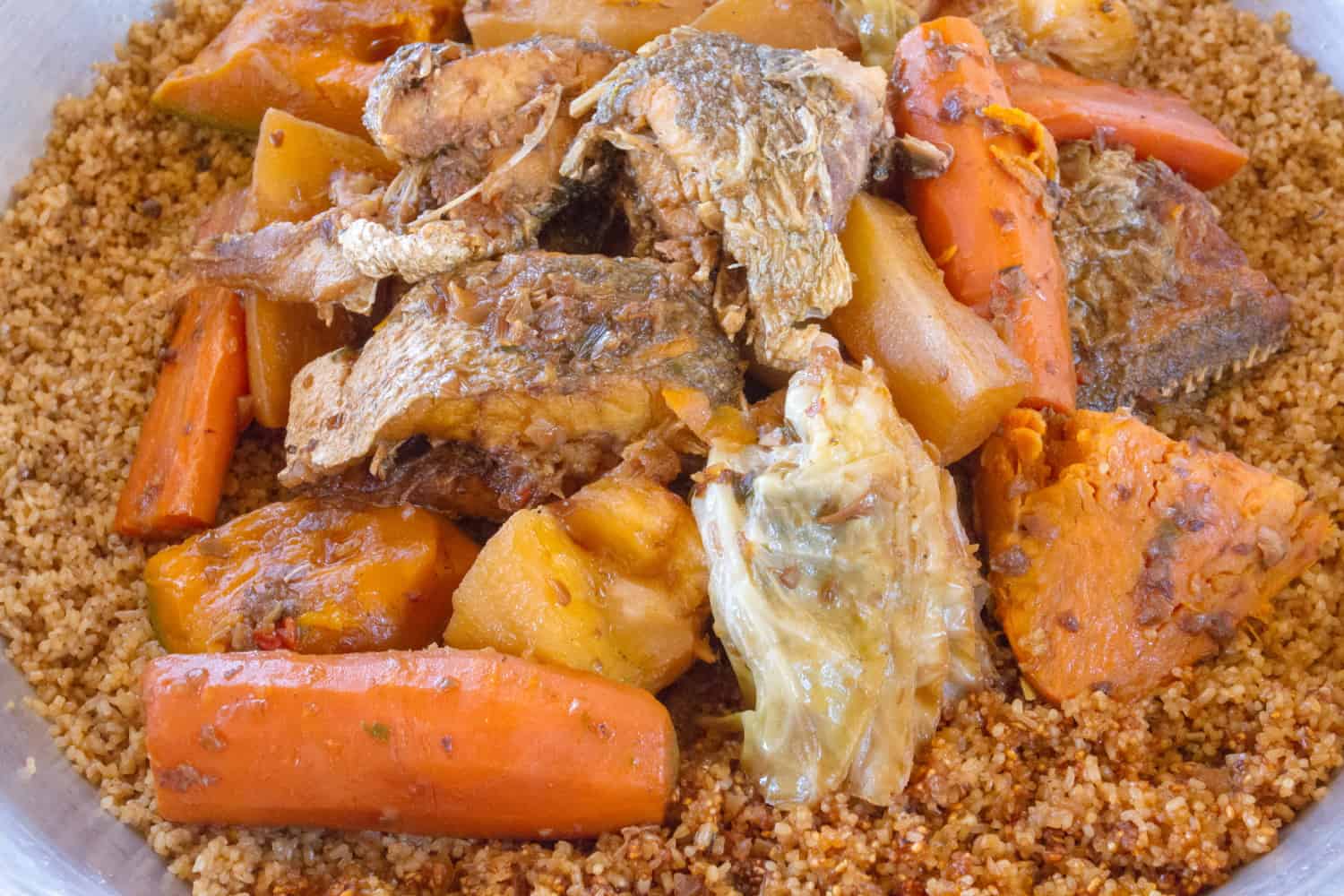 Pretty much inescapable on the menus of Senegal, thiéboudiènne is widely considered to be the country’s national dish.

Also taking the name chebu jen, this main meal is a one pot stew containing chunks of fresh fish in a rich tomato sauce that’s served with rice.

It normally also contains vegetables such as carrots and onions which are both common in Senegal, and flavoured with the region’s Maggie brand stock cubes and freshly-chopped chillies.

Additional versions are instead made with chicken (tiep ganaar) or red meats (tiep yappa), although pork is rarely used because of the country’s Islamic traditions.

Thiéboudiènne originates in the city of Saint-Louis, which lies between the River Senegal and Atlantic Ocean, close to Senegal’s border with Mauritania to the north.

Originating from the Casamance region in the south of Senegal, almost cleaved from the rest of the country by The Gambia, poulet yassa is another dinner dish.

Its primary ingredient is a portion of chicken (poulet in French), normally the whole leg. This is marinated in a blend of spices, before being gently cooked through in a pan alongside lots of sliced onion.

Other ingredients include garlic, mustard, and lemon juice, creating a dish that blends Senegal’s traditional spice flavours with French influences from the country’s several centuries as a colony.

Poulet yassa is usually served on a bed of plain white rice.

Mafe, or maafe, is a luxurious peanut stew resembling peanut butter in taste.

Known in French as sauce d’arachide, it probably doesn’t need stating that the predominant ingredient is peanuts. These are usually ground into a rough paste, and their rich oiliness softened by the addition of onion and tomato.

Mafe is a dish with a recipe that shifts from person to person, and can include everything from root vegetables to chilli peppers.

Mafe sauce usually coats beef or lamb, since these meats can better match the strong peanut flavours. It is eaten with either rice or couscous.

Vegetarians might struggle a little in Senegal, but one dish they can rely on is saladu nebbe.

Tasty and filling, saladu nebbe is a black-eyed pea salad. Served cold, it is made with a range of fresh local vegetables.

These include tomatoes, cucumber, bell peppers and chilli peppers for a kick of heat.

Their individual flavour profiles are brought together under herbs such as parsley, and marinated with lime juice and a little oil, as well as salt and pepper.

When it comes to snacks, five cent biscuits (cookies) are a popular and readily-available foodstuff purchasable from vendors with small stalls on street corners.

Better known locally by the French name of cinq centimes, these tasty bites are peanut flavoured, making further use of one of Senegal’s main crops.

While they do vary, cinq centimes biscuits are usually made as a plain biscuit or shortbread-style biscuit. The peanut flavouring comes from the addition of peanut butter (often hand-ground) once the biscuits have been baked and allowed to cool.

Some versions are completed with crushed or whole peanuts.

It gets this name because it is rice packed full of other ingredients. The presence of large quantities of stewed meats in addition to a good number of vegetables make it a celebratory dish eaten at dinner parties to demonstrate wealth.

The rice portion of the dish takes on the flavour of the added vegetables, which can include tomatoes, carrots, and cabbage or other local leafy greens with a similar taste.

The rice often turns an orange or red colour due to being prepared with the tomatoes and spices, which are cooked alongside the meat in a single stewing pot.

French-style baguettes are common in Senegal, with people outside the home enjoying ‘le sandwich’ for both breakfast and lunch.

However, the fillings you find in these long baguettes can be very different from those you will find on the streets of Paris.

Rather than ham or cheese, you are far more likely to find a baguette filled with ndambe, a recipe of spicy stewed beans which can also be eaten as a more traditional stew dependent on its consistency.

To make it between the two halves of a freshly-baked baguette it obviously needs to be quite dry, but that doesn’t mean ndambe lacks in flavour.

Black-eyed peas are often used as the pulse. They are cooked in a beef broth alongside onion, garlic, stock and chilli powder.

Thiakry, which can also be pronounced and spelt closer to ‘chakery’, is a form of couscous known in Senegal and neighbouring countries in West Africa.

Unlike the couscous that is served with savoury dishes, thiakry is a sweet couscous enjoyed as a dessert. It is made from millet, rather than semolina, as is traditional further north on the continent.

To turn the crushed grains sweet, they are mixed with spices such as nutmeg, and blended with yogurt, tinned condensed milk or fresh whole milk. The result is a semi-liquid mass with a tangy profile.

Versions you might find in restaurants will have further ingredients added for texture and flavour, including flakes of desiccated coconut, raisins, or chopped nuts.

When used in savoury dishes, the millet couscous goes by the name of chere.

While grilled fish might not sound particularly Senegalese, there’s no doubting the importance of this dish to the country’s repertoire of cuisines.

Easiest to find on the Atlantic coast, from Saint-Louis down to Dakar, locals have become masters of grilling bream and other fish species over open fires. They do so with marinades of chilli oil and citrus juice, ensuring the result is fully-flavoured yet still moist.

Much of the moreish nature of this dish comes from the fact the fish are so fresh, usually caught by fishermen using traditional pirogue wooden canoes just a few hours before.

Don’t be surprised if you’re told to use your fingers to pick at the flesh, which adds another sense of enjoyment to a portion of Senegalese grilled fish.

In short, sombi is a coconut rice pudding. It is traditionally served warm, but is increasingly found served chilled as well.

Often eaten for breakfast, this dish has a luxuriant consistency created from the natural starch within the white rice combining with coconut milk over heat. This comes either through the addition of pieces of fresh coconut, or from using separated coconut milk.

Coconut cream provides an even richer texture, while a little sugar is added to provide the sweetness lacking from the use of fresh coconuts.

Surprisingly, a small amount of salt is also thrown into the pot, which enhances the flavours of the dish’s other ingredients.

Roughly translating from the French as ‘Saint-Louis style capitaine’, this is a fish dish developed in the city that gives it its name. It uses Nile perch – known locally as capitaine, or ‘captain’, because it is so highly regarded as a fish for eating.

The fish is internally stuffed with spices so that they infuse the flesh as it cooks. Served with rice, or sometimes with French fries, the fish is drizzled with the sauce to ensure it is succulent.

Taking the place that beers have in European cultures, mint tea is as important a cultural tradition as it is a hot drink.

It is prepared in small metal teapots filled with loose green tea and heated on a stove or even an open fire.

A large sprig of fresh mint leaves is then either added to the teapot or to each individual glass – which resemble shot glasses in size and design.

Sugar is also added to remove the bitterness of the tea leaves, creating a very sweet drink. The tea is poured from the teapot into the glasses at height, to create a light froth at the top of each glass.

Being offered a glass of mint tea is considered an act of welcome and friendship, so don’t be surprised if strangers offer you a glass if you’re travelling in the country.

It’s said that if you’re offered a fourth glass, it’s a polite hint that you’ve outstayed your welcome.