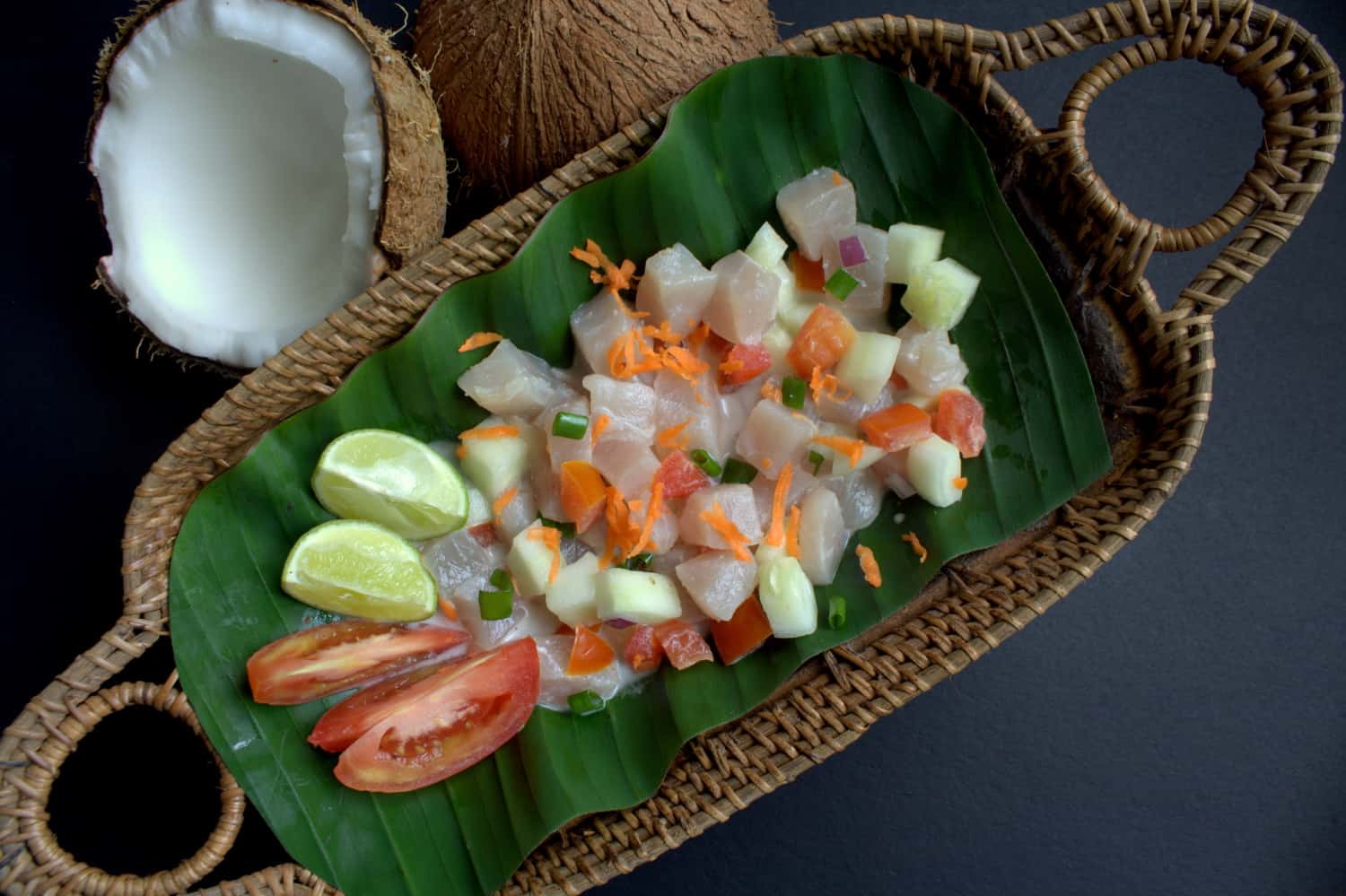 Populated for at least 3,500 years, Samoa is formed of a series of small islands in the middle of the Pacific Ocean, forming a triangle with Australia to the west and New Zealand to the southwest.

Originally known by Europeans as the Navigator Islands for the skill of its seafarers, the island’s traditional cuisine has been influenced by these travels over hundreds of years.

Other more recent influences come from its period of German and British rule before independence. That said, Samoa’s food culture was largely limited to the fruits and vegetables that grow naturally on the limited ground the four inhabited islands cover.

Beings islands, fish is obviously an important source of protein, though pork is another popular choice. 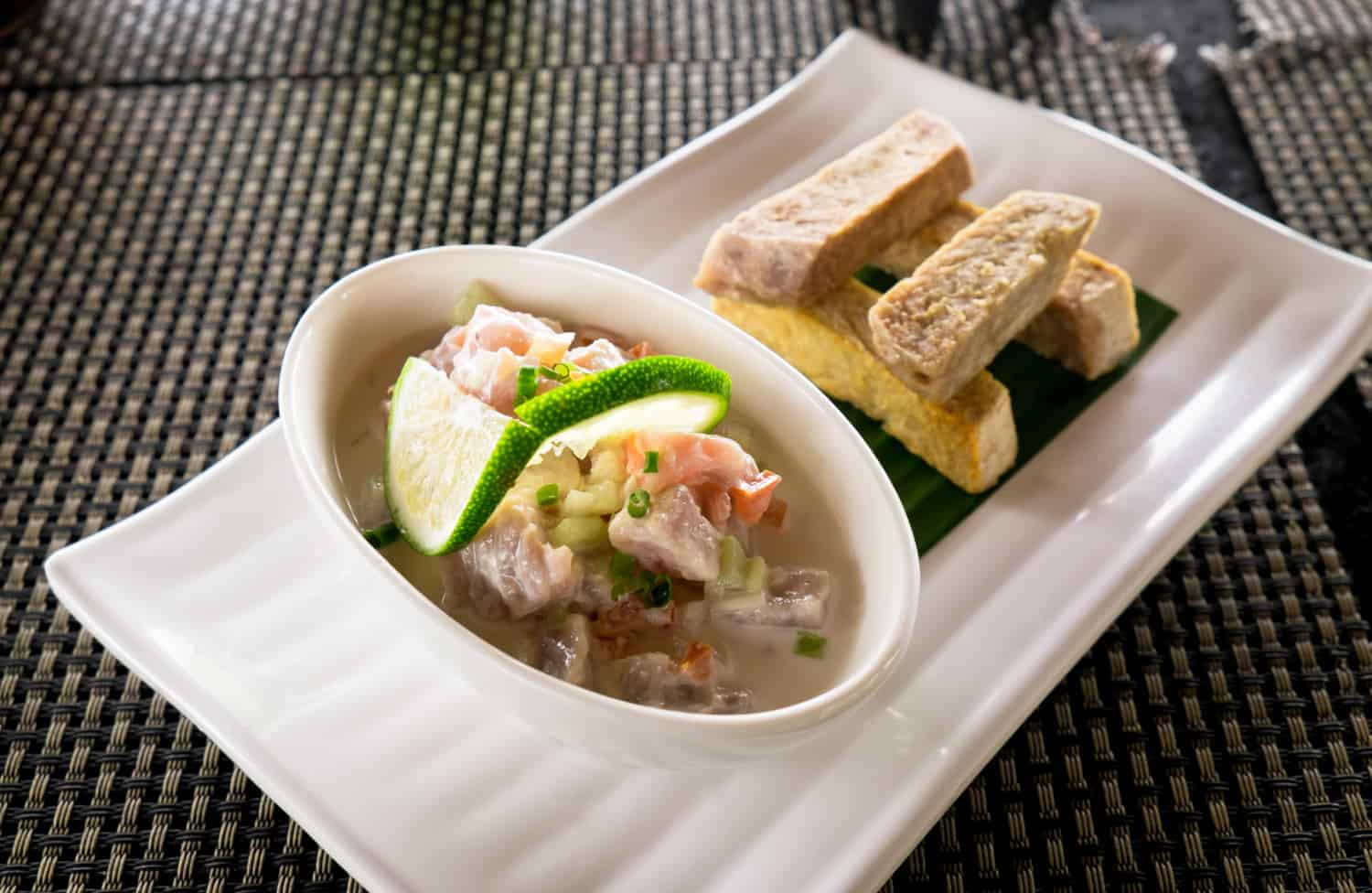 Oka is the Samoan version of South American ceviche or Hawaiian poke. As such, its main ingredient is fresh, raw fish (or i’a). This is lightly marinated in some sort of citrus juice to partially ‘cook’ the flesh.

Coconut milk is another key ingredient to provide the traditional flavours of oka i’a, while this dish also includes a range of chopped fresh vegetables.

Tomato and onion are popular choices, and add to the sweetness of the coconut milk in their own way. Chopped chilli peppers are also common, providing a gentle warmth to this cold dish, rather than a heavy kick of spicy heat.

Oka is commonly served as an appetizer, though also its perfectly possible to enjoy the dish as both a lunch and a main meal.

Palusami joins together two of Samoa’s favourite things – the umu, and coconut cream, which makes its way into a variety of Samoan dishes as we will discover.

Baked on the hot stones of the umu, palusami are small bundles of thick coconut cream wrapped in fresh taro leaves. It can also be prepared with chunks of spam (tinned ham) or corned beef in addition to the coconut cream too.

Once cooked, the cream turns into a semi-solid mass, which is eaten together with the taro leaves used to cook them.

While palusami may not be much to look out, this side dish is an integral part of the canon of traditional Samoan dishes.

At first, fish and fruit salad doesn’t sound like a particularly promising combination to some. However, like that of coconut cream and taro leaves in palusami, they do work really well together.

There is no designated fish that is used in this dish, although snapper and tuna are common choices, as well as crayfish and octopus.

Unlike in oka, the fish in this instance is cooked. Fillets are usually cooked in a pan or baked slowly in the oven.

Fruits vary too, and can range from papaya to banana and mangoes. Their flavoursome flesh matches the natural sweet flavour profile of most fish, creating a tasty – and healthy – meal.

Both fa’apapa and pani popo are breads flavoured with coconut.

Originally fa’apapa was a hard, almost biscuit-like bread cooked in slabs in the umu, but over the past decades this recipe has slowly evolved, largely as the use of the umu as a cooking device has decreased.

Today much softer and fluffier, and more like a standard loaf of bread, fa’apapa is a common dish to find on Samoan breakfast tables.

Pani popo are small bread rolls with a similar overall flavour of coconut. Best enjoyed hot immediately after baking, they are popular as a snack and as a side dish.

Faiai eleni is one of those dishes that divides opinion, and not because of its flavour. There are those who insist faiai eleni uses raw fish rather like oka, while others are certain that the dish should either be cooked using the umu, or in an oven.

The strong oily flavour of the mackerel insures it can hold its own against both the coconut and the onion.

The dish is often served with baked taro, resulting in a filling traditional Samoan meal.

Found right across the Samoan islands, from the stalls of street vendors to private kitchens, panikeke are balls of deep-fried batter called both a fritter and a pancake.

Rather than being made with a plain batter, the mix that makes up panikeke batter comprises mashed up ripe bananas.

The banana is not just there to provide body, but also carries its flavour to the finished balls, which should be enjoyed hot straight from the frying oil.

Crispy on the outside and soft and spongy like a doughnut on the inside, additional flavours such as vanilla often drift across the palate when you enjoy these delightful bites.

Pineapple is sometimes used instead of banana, providing an alternative taste to look out for on the islands.

Sapasui also goes by the name of Samoan chop suey, which gives a good indication of what might turn up if you order this from the menu of one of the country’s restaurants.

Richly coloured and flavoured with soy sauce, this noodle dish will generally contain a mixture of meat and vegetables, although exactly what ingredients are used varies from chef to chef.

Soybeans and mung beans are common, with the meat component of the dish most likely to be either pork or chicken.

You may have already noticed that Samoans have something of a sweet tooth, with even breads and savoury dishes having sweet components.

However, that doesn’t mean Samoans don’t enjoy desserts too. One of the most traditional is kopai, which combines sweet dumplings called puka and a bowl of soup-like sauce.

There are a number of different versions of kopai, which differ in their overall flavour, with a common one being caramel flavoured kopai.

As well as a dessert, kopai are common as a breakfast foodstuff, so don’t be surprised if you see it on the breakfast table!

Although kale moa may sound extraordinarily exotic, this dish could also be described by the slightly less exciting English words of chicken curry.

It’s pretty hard to get away from coconut or coconut milk, it’s so ubiquitous in the nation’s traditional cuisine. Coconut milk is used so much in fact, that it also makes its way into Samoa’s curries. These include kale moa, which made it to the island alongside Indian workers during British rule.

Balancing the natural sweetness of the coconut are base ingredients including onion and ginger. Additional profiles come through the addition of peppery celery, as well as potatoes and carrots.

Kale moa is usually served alongside a good-sized portion of white rice, to help soak up all the lovely curry sauce.

Samoa’s national drink of ‘ava is known throughout the island nations of the South Pacific, where it is generally known as kava. It plays an important role in society, with specific rituals and customs associated with its ceremonial consumption.

While not alcoholic, ‘ava is mildly psychoactive. It is made from grinding up the root of the kava plant, which grows naturally on the islands.

Once ground, the root is mixed with water and allowed to stand in a special bowl known as a tanoa or laulau. Before being drunk, the mixture, which is now a brown colour, is strained to remove any pieces of fibre suspended in the liquid.

‘ava drinking is largely a male preoccupation, stemming from the need for good relations between neighbouring tribes. It should be considered a great honour to be invited to take part in a traditional ‘ava ceremony.

We finish off our exploration of Samoan traditional foods with another dessert turned snack food.

Pisua is a dish that consists of tapioca pearls covered in a sauce of coconut milk and caramelised sugar.

Served chilled, pisua is a great way to end a meal, and is also eaten as a snack in the afternoon. It is normally served in small portions placed in clear cups or bowls.