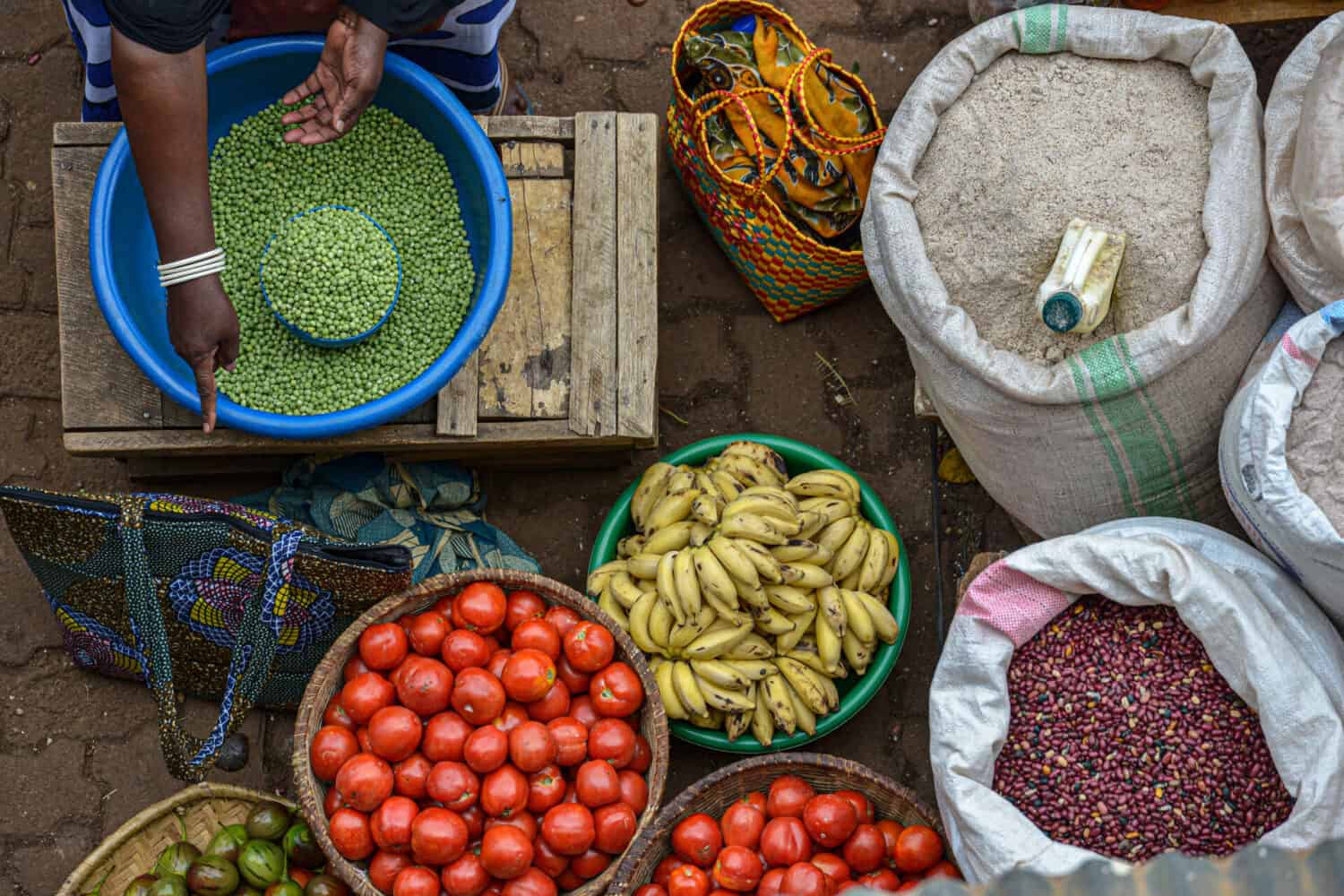 Rwanda is one of Africa’s smaller nation states. It lies in an area of fertile hills in East Africa’s Great Lakes region.

Despite its small size, the country’s cuisine has still differed historically between different ethnic groups. The largest are the Hutu, the Tutsi, and the forest-dwelling Twa (once called pygmies because of their small size).

That said, its traditional cuisine comes almost entirely from what can be grown in its rich tropical soils. Many dishes share a history with the country’s neighbours, although animal protein is a rare addition to the diet here.

Further influences come from the period when Rwanda was colonised first by Germany and then by Belgium – particularly when it comes to the use of potatoes and the drinking of lagers.

Below are X traditional dishes found within Rwanda cuisine that you simply must try if you have the chance. 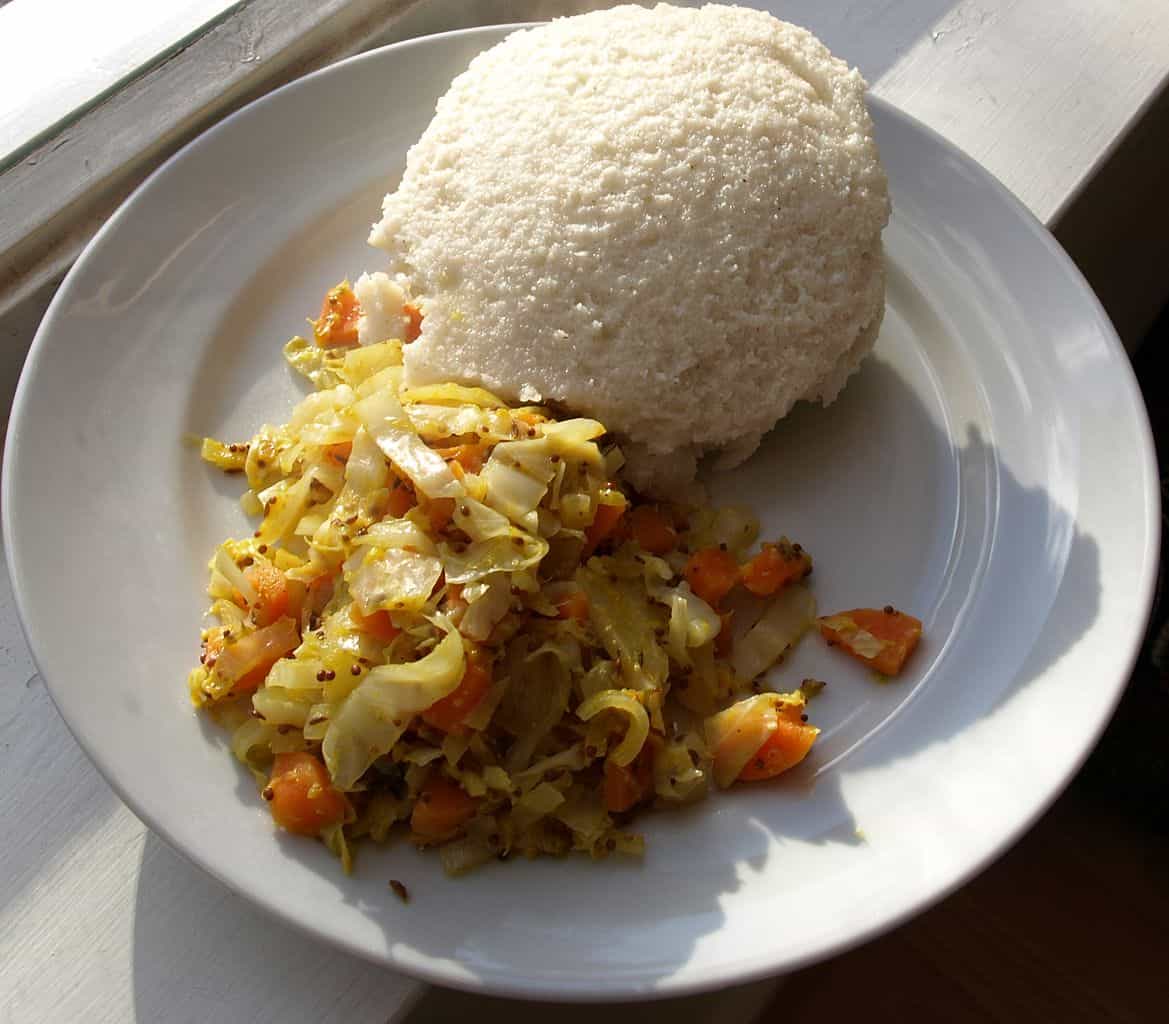 Also known as ugali, bugali is a staple foodstuff right across East Africa, and Rwanda is no exception. It is a type of thick savoury porridge that is rather plain when tasted alone.

However, when it is served along with other dishes as it normally is, bugali acts as an excellent vehicle for their flavours and sauces. It is both cheap and filling, but the process of making it is time-consuming and labour-intensive.

Ordinarily left to Rwanda’s women, the preparation of bugali begins by the crushing or pounding of maize (corn) in a large pestle and mortar to create a flour.

This flour is then cooked with a little boiling water in a pan until it comes together and takes on bugali’s dough-like consistency. It can also be prepared with fresh milk rather than water.

Usually served as a ball taking up most of the serving dish, bugali is eaten by tearing a small section off the main ball with your fingers and using that to bring the other ingredients on the dish to the diner’s mouth.

A common accompaniment to bugali, you’re sure to come across Rwanda’s dish of mixed cabbage, which is served in homes and restaurants right across the country.

With meat rare in the traditional diet of the nation, this recipe has to be both filling and nutritious – and of course tasty too.

While called mixed cabbage, recipes generally tend to also include chopped carrots, white or red onion, and grated tomato. These are all vegetables that grow locally on the hills of the country.

The blend of chopped and sliced vegetables is basically cooked down in a pan until they have softened and released their flavour. This is usually enhanced by the addition of a crumbled stock cube, often just called Maggie after the leading local brand.

Urwagwa is a beer made from the fermentation of mashed bananas. Its production still uses some grain, in the form of flour, but only as a source of wild yeasts to convert the fruit’s sugars into alcohol.

The beer is made from the soft ripe flesh of the East African highland banana. For making urwagwa, the bananas are usually picked while still green and their fruit still firm. They are softened by using the heat of a cooking fire.

As the bananas are being mashed, they release a clear juice. It is this juice which is collected and will become the beer.

After just a day of fermentation, the beer is ready to drink, when it might be filtered to remove the flour and yeast.

Urwagwa can be enjoyed simply for the pleasure of it, but the beer also has an important role in several traditional ceremonies of Rwanda’s tribes.

Urwagwa is not the only traditional Rwandan dish that makes use of the country’s crop of bananas.

Igitoki makes use of the same highland bananas and is an alternative carbohydrate-based side dish to bugali. In neighbouring Uganda, it goes by the name of matooke.

In this dish, the green bananas are first peeled and then steamed to cook them, turning the fruit yellow from its original off-white tones.

The bananas are then mashed, so that they resemble mashed potato, and are ready to serve.

As you might expect, igitoki has a slightly sweet flavour profile as a result of all the natural sugars that can be found in the fruit. It is often served with a peanut sauce called ikinyiga.

Sometimes described as a soup, sometimes as a paste, and sometimes even described as a sauce, what exactly ikinyiga is remains a matter of opinion and family tradition. The difference is largely down to how liquid the resulting dish is.

What is clear is that ikinyiga’s main ingredient is the peanut or groundnut, and that’s the flavour profile you should be expecting if you order it.

Relatively simple to make, the peanuts are ground down into a paste using the natural oils within the nut as an emulsifier.

Other ingredients such as chopped aubergine, okra, and bay leaves are added, together with a little water, and allowed to simmer.

Rwandan cuisine is not all that hot with chilli spice, particularly when compared to the cuisine of some of its neighbours.

But that’s not to say Rwandans don’t enjoy a little heat as they eat.

Many dishes we’ve already mentioned will come served with a small dish of pili pili (in other words peri peri) or hot sauce.

Pili pili has a base of tomato and some onion, which are grated together. Hot peppers such as Scotch bonnets are grated or ground on a stone and added to the base.

The sauce is only ready once this mix of tomato, onion, and chillies has been cooked very slowly with a little vegetable oil, until it becomes a thick semi-solid sauce that’s able to coat other ingredients on a plate.

Another very common dish served with bugali or matooke is stewed beans. They are eaten in such huge quantities that you will only need to be in a Rwandan marketplace for a few minutes before you spot a massive pile of the raw bean.

The bean in question is the humble kidney bean. You won’t find many tins of pre-cooked beans here, so the dried beans need to be first soaked overnight to soften them.

Drained of their water the next day, the beans are added to onions that have already been sweated down in a pan, and allowed to warm through. Grated tomato is added for a little sweetness, while stock cubes add a greater depth of flavour.

Once a little water is added, the beans are allowed to simmer gently for several hours, giving them a rich and creamy texture in the mouth.

When it comes to fish, in Rwanda all eyes turn to the tilapia. A fast-growing freshwater species that seems to adore Rwanda’s many lakes, the favoured way to enjoy tilapia is whole.

Sometimes called ‘big fish’ as a result, you’ll normally be asked to pick a fish from a line-up that’s large enough to feed you and whoever you might be dining with.

The fish is then placed on the heat of a charcoal grill until its flesh is flaky and succulent, when it is served with onion, garlic, and carrots.

Traditionally, the flesh is picked up with the fingers, which has the added advantage of making it really easy to avoid swallowing a tilapia bone by accident.

Most likely brought to Rwanda around 100 years ago with the Belgian colonisation of the country, the French term brochette is used to describe any foods cooked on a skewer over an open flame.

This method of barbequing meats and vegetables remains popular in Rwanda, both as a street snack and as a meal in sit-down restaurants in cities like the capital, Kigali.

Rwandan brochettes can be prepared using pretty much any ingredient you might find in a kitchen, however they are usually made by brushing chilli oil onto cuts of meat as they griddle.

You’ll most commonly find beef and goat used, as their natural fats keep the meat chunks tender, although even fish and goat offal can be served.

These small sardine-like fish were introduced to Lake Kivu on the western border of Rwanda in the 1950s as a new source of protein.

Preferring the deepest waters of the lake, they are caught under moonlight as they rise to the shallows to feed, and continue to be captured in the traditional manner – with nothing more than a wooden canoe, man power, and a finely-woven net.

A delicacy ever since, sambaza are generally deep-fried and eaten whole, having been dipped into pili pili or mayonnaise in more urban areas.

They have a taste that combines sweetness with a touch of umami saltiness, which is enhanced further if the sambaza are not deep-fried when freshly-caught but dried in the sun and used to make fish stock.

Traditional to Rwanda as well as its Great Lakes neighbours, kachumbari is an uncooked salad of chopped tomatoes and onion.

Cucumber is often also found in the dish, with the word kachumbari thought to derive from the name of this vegetable.

These simple ingredients are usually improved with the use of a little chilli, herbs including coriander and parsley, and lemon or lime juice as a vinaigrette.

Kachumbari is more often than not served alongside other Rwandan staples such as bugali or rice.

If Rwanda has soul food, it’s mizuzu. Sweet yet savoury, snack and side dish, mizuzu keep Rwandans smiling all the week long.

The key to great mizuzu is to use the ripest plantain you can find. A larger cousin of the banana, the plantain has a similar starchy fruit. However, plantain lack the sweetness of banana, and are at their best when their yellow skins are showing spots of deep brown or black.

Chopped into slices or chunks, the plantain pieces are deep-fried in oil until they take on a rich golden-brown hue close to the colour of toffee as the natural sugars inside caramelize.

Another deep-fried treat is mandazi. Like mizuzu, mandazi can be eaten either as a snack or as part of a larger meal. They are easiest to find in cafes, since they are a common and traditional snack to enjoy while drinking a cup of tea (chai) or coffee with friends or family.

Often likened to a doughnut, without the sugar coating or any fillings, mandazi are a type of fried bread. They have a light fluffy interior that has just a hint of sweetness.

Generally shaped into a rough triangle, mandazi are also eaten as leftovers for breakfast, or as a dessert, when they might be lighted dusted in sugar.