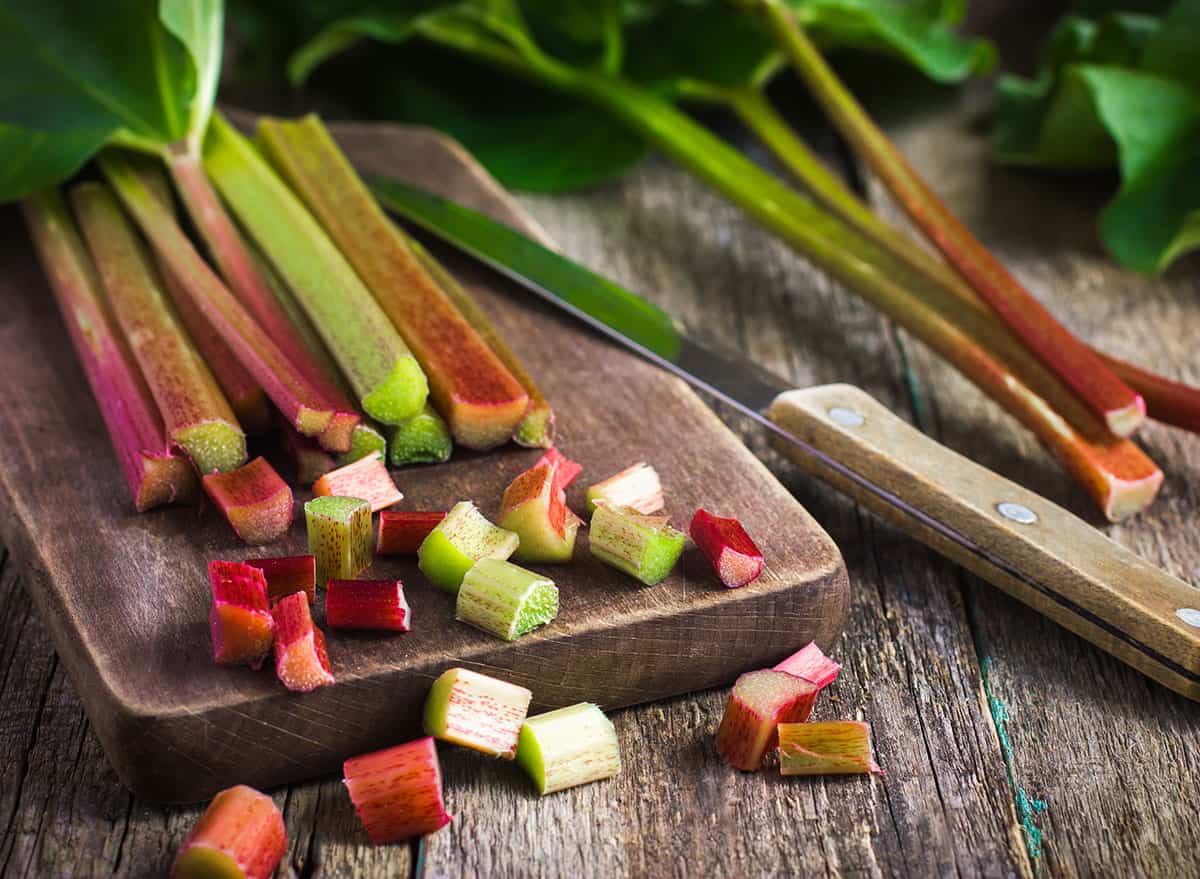 Rhubarbs are plants with inedible leaves but an edible stalk. The leaves are inedible because they contain high levels of oxalic acid.

There has been a lot of controversy about the classification of rhubarb.

Biologically, rhubarbs are vegetables. However, they are classified as fruits in many culinary processes, because they are used to make jellies and jams.

Rhubarb is famous because of its unique, distinctive taste.

About 90% of rhubarb is water. You would think this makes it flavourless, but you would be wrong.

Rhubarbs have a low natural sugar content compared to beetroot or carrots. Rhubarbs are both sour and savoury, giving a great taste without the sweetness of natural sugar.

Raw rhubarb stalks are quite crunchy, and they have a tart taste. Their sourness depends on the plant, and some rhubarbs are tart to the point of being bitter. 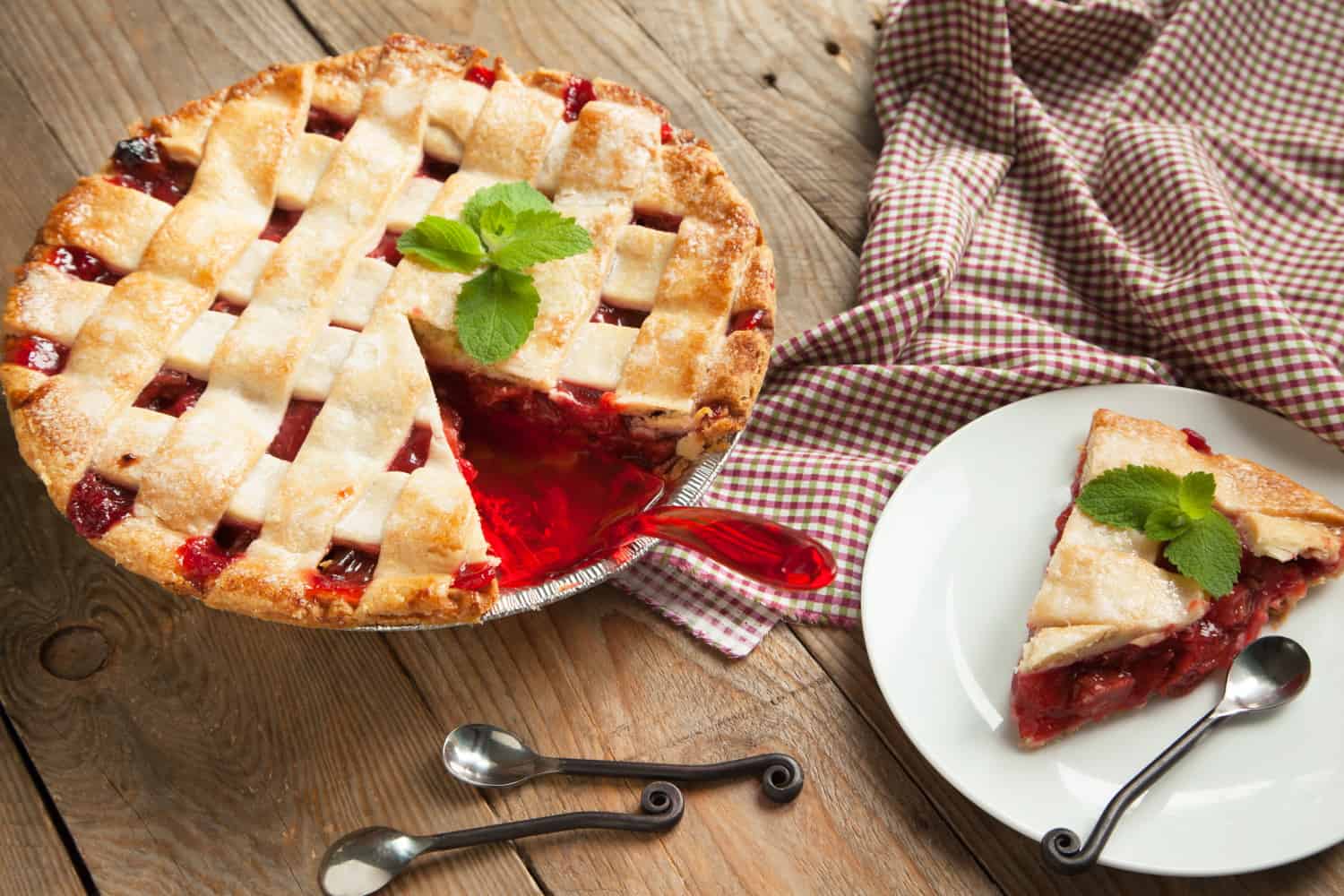 Rhubarb comes into season in spring and is available throughout the summer.

Summertime is the perfect time for pie baking, and rhubarb tastes excellent in pies.

You can bake different pies with rhubarb, including strawberry rhubarb pie and rhubarb custard pie.

Rhubarb custard pie is a delicious pie perfect for a summer treat or dessert. The sweet custard complements and balances the sour rhubarb excellently.

Rhubarb custard pie has a unique flavour that combines sweet and sour to keep you wanting more.

Can You Eat Rhubarb Raw?

You can eat your rhubarb stalk raw.

Before you cook rhubarb or bake with it, you should taste it raw.

Remember not to eat the leaves because they are poisonous. Remove the leaves and dispose of them properly.

The leafy vegetable is quite delightful when consumed raw. Different ingredients help to offset the natural tangy flavour of the rhubarb.

Simply break off a stalk, rinse thoroughly and peel off its tough, stringy outer fibres. Make sure you add a sweetener to the tender flesh.

Many people advise that diners dip rhubarb stalks in sugar, honey, maple syrup or any other sweetener. This will significantly reduce its sourness.

Some people recommend adding salt to your rhubarb instead of sugar.

Another way to eat raw rhubarb is to slice or dice peels stalks thinly. You can sprinkle the chopped or diced rhubarb on your cereal or yoghurt to lessen its tart taste.

These are different ways to eat your rhubarb raw, so try them out to know your favourite combinations.

Rhubarb smoothies are also a very healthy and delicious snack. Blend rhubarb, ginger, strawberries, coconuts and mangoes together to make a great smoothie.

You can also experiment with a lot of other flavours like orange juice, almond milk, vanilla or vanilla-flavoured soy.

Use your raw rhubarb stalk creatively, and you can have several snacks and combinations to choose from.

How to Eat Rhubarb

Rhubarb is a versatile vegetable. It can be eaten in many different ways.

You can eat it raw, add it to cereal or yoghurt, roast it or bake it. Here are a few ways to eat rhubarb:

You can eat your rhubarb stalk with salt, sugar, maple syrup or any dip that catches your fancy.

You can add raw julienned rhubarb to your garden salad.

If you want a much more vibrant and distinct taste, you can roast chopped rhubarb sprinkled with sugar or a little drizzle of honey on a baking sheet. Let the rhubarb roast for five minutes, allow it to cool down, then mix the roasted rhubarb with your garden salad.

A popular way to eat rhubarb is by making a rhubarb compote. Rhubarb compotes are quite rich in flavour and nutrients.

It is usually combined with fruits like apples and strawberries. You can sweeten your compote with honey, sugar or maple syrup.

You can mix diced or shaved rhubarbs with other fresh fruits and vegetables to give a tasty and healthy salad.

To make sweet and sour rhubarb stalks, you need to do the following:

Can You Eat Green Rhubarb?

Yes, you can. Green rhubarb is a variety of the regular rhubarb. The colour does not change the level of sweetness or flavour of the plant.

There are different varieties of rhubarb. For example, the ones grown in season are usually pink.

Hothouse rhubarb, on the other hand, are cultivated in greenhouses when rhubarb is out of season. They range from pinkish red to a deep pink.

Regardless of the colour, good rhubarb has firm, crisp stalks.

As a matter of fact, some cultivars consider green rhubarb to be much more productive than pink rhubarbs.

A myth surrounding rhubarb colours assumes that the red-stemmed rhubarb holds more sweetness than the green variety. But this is not necessarily true.

The Victoria variety is known as one of the greenest rhubarb varieties. It also produces some extremely sweet stems.

Another myth surrounding remitted production of green rhubarb is that the plants only turn green when they are old or fake.

This is not true. While there are fake variations out there, original rhubarb plants can turn green when it is put in new soil.

The red colour usually results from the level of ph in the soil. If your soil doesn’t have enough ph, the plants will most likely grow as green.

Interestingly, this has no effect on the rhubarb stalk quality. Therefore green stalks are easily consumable.

Remember, the leaves are poisonous and inedible.

Rhubarb is a perennial vegetable that has a long crimson of light green stalks. Large ruffled green leaves top these stalks.

The ruffled green leaves are less famous than the tart stalks. They contain a poisonous oxalic acid. For this reason, they are typically snipped off or discarded.

The tarts stalks are the only edible part of the plant.

How to Tell if Rhubarb is Ripe

Telling when Rhubarb is ripe is usually straightforward. You can tell as soon as you walk towards the plant.

You only need to know what to look out for.

Rhubarb’s ripeness is not only dependent on the colour of the stalks. Ripe rhubarbs do not have to be red.

Instead, use the age of the plant and the height of the stalks to determine the ripeness of a rhubarb.

Rhubarb stalks are meant to be left alone until the second year. Some even stay as long as the third year.

As long as the plant does not look healthy, do not harvest it. Also, if it is not producing a lot of stalks, wait until the third year.

Another determining factor is the height of the plant. The cultivar usually determines the sufficient maturity height.

In general, though, the stalks ought to be at least 10 inches long. It can also be harvested when it is about 25 centimetres long.

The reason is simple. The plant must have enough growth to survive the year’s harvest for the next year as well.

Note that harvesting a rhubarb plant before it is fully ripe can result in the death of the plant.

While a ripe rhubarb plant can be harvested during spring, there is also an advised period to stop harvest for the season. Typically, cultivars collect till fall.

Pay attention to your individual plant. Some might not be able to withstand an extended period of harvest yet. This is especially so because rhubarbs have to store energy for winter.

Some plants require slower harvesting while some require total stoppage once it is July.

Rhubarb stalks are parts of the plant that are perfect for consumption.

You can eat rhubarb in several different ways aside from putting it in the infamous pies.