Parsnips are root vegetables that resemble albino carrots. They are native to Eurasia and have been used in meals for centuries.

Parsnips belong to the Apiaceae family, as well as carrots and parsley. They are mostly available between autumn and winter.

This article will cover what parsnips taste like and common questions related to their taste. 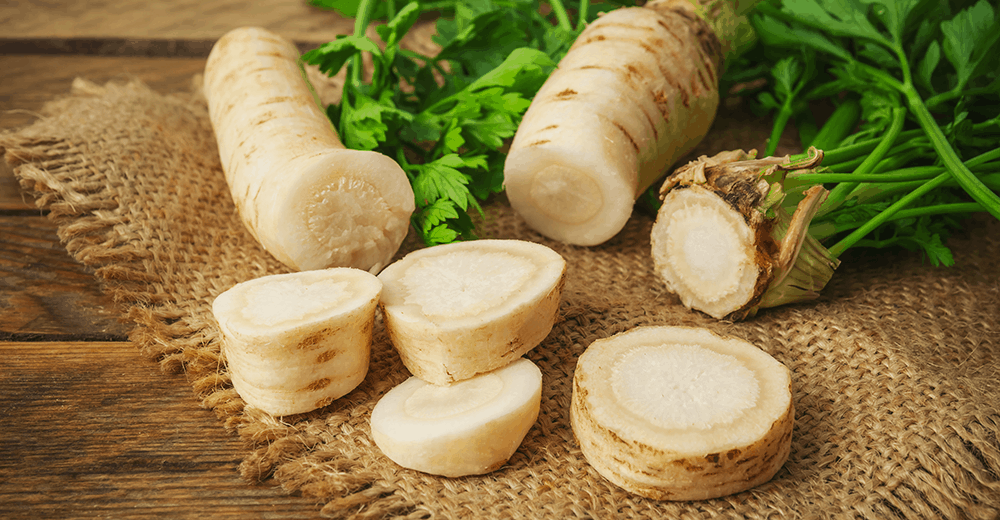 Contents show
1 What Do Parsnips Taste Like?
2 Do Parsnips and Turnips Taste the Same?
3 How to Eat Parsnips
4 Can you Eat Raw Parsnips?
5 Are Parsnips Healthy?
6 Can You Freeze Parsnips?
7 Parsnips Substitutes
8 To Sum Up

Parsnips have a complex, unique flavor. They taste like carrots, but with a nutty taste.

They have a mild aroma that is reminiscent of celery. They’re much sweeter than carrots when cooked.

Parsnips contain more starch. Also, they have an earthy taste, which is more prominent than carrots.

These vegetables are typically harvested between late autumn and late winter. But a lot of farmers leave the parsnips in the ground until winter.

The parsnips they leave in the ground are the sweetest. This is because the sugars would have had time to concentrate over winter.

Do Parsnips and Turnips Taste the Same?

Although they’re both nutritious root vegetables, parsnips and turnips do not taste the same.

Parsnips have a candy-like sweetness to them.

Turnips are tangier and slightly spicy than anything else.

Mature turnips have a slightly woody flavor with bitter and spicy undertones. No matter their age, parsnips retain the same sweet, crispy, carrot-like flavor that makes them popular.

How to Eat Parsnips 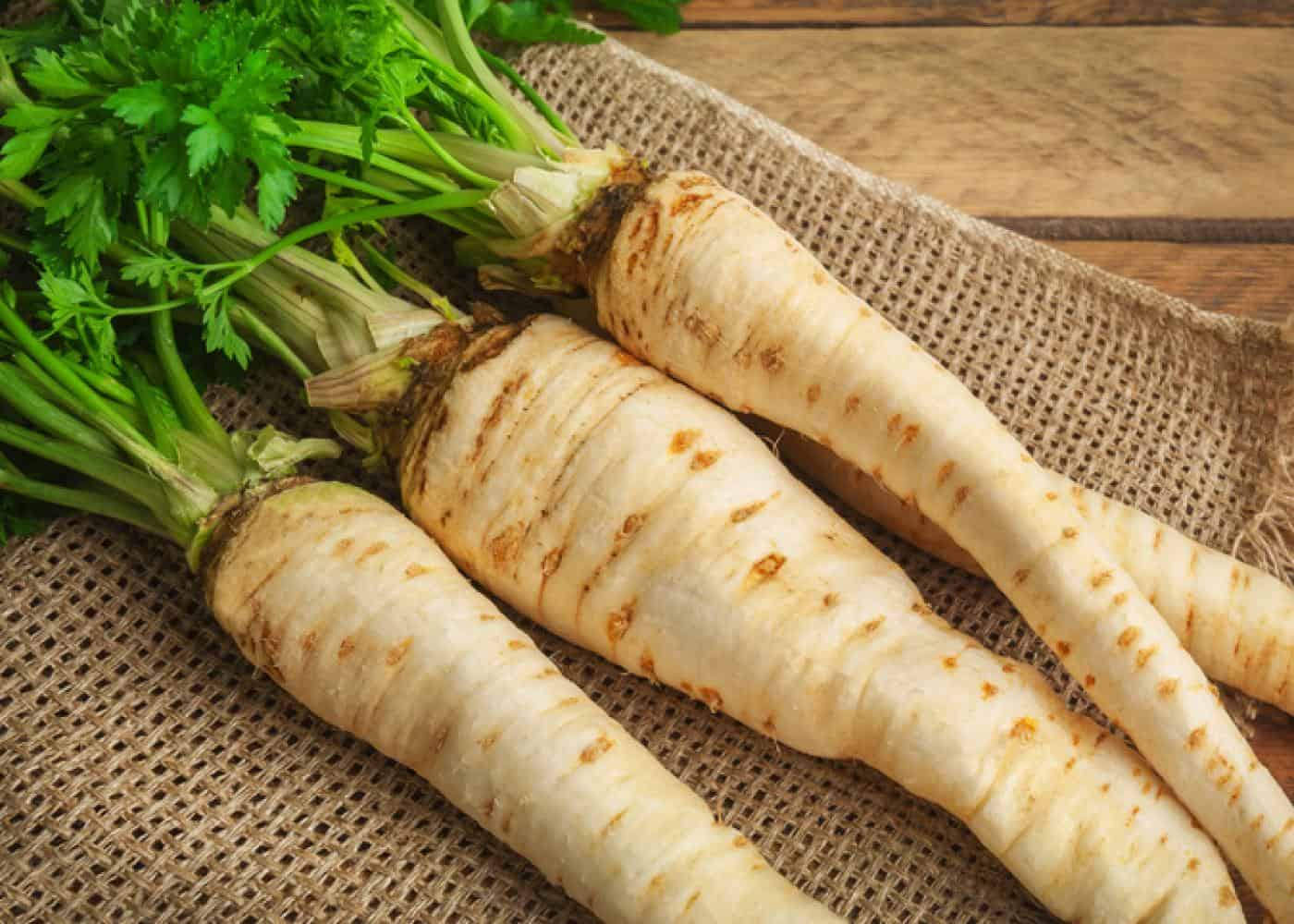 There are numerous ways to eat parsnips and make them taste as delicious as they are healthy!

Here are a few of our favorite ways to eat parsnips:

You can make a delicious parsnip gratin with feta, cumin, and turmeric.

You can make a vegetarian shepherd’s pie with parsnips, lentils, and mushrooms.

Roast your parsnips. Parsnips are famous for their sweetness, and roasting them accentuates it.

Roasting caramelizes the natural sugars in the parsnips. This transforms them immediately. From sweet vegetables, they become the veggie nuggets that you just can’t get enough of!

The process of roasting parsnips is straightforward. All you have to do is chop up your parsnips and put the chunks in oil and salt on a baking sheet, then put them in the oven.

You can serve your roasted parsnips the same way you would serve any other roasted vegetable. Serve it with beef, pork, duck meat, lamb or other vegetables.

Mind you; the sweetness could be overpowering. However, cut it down by adding boiled or steamed cauliflower or potatoes to the soup.

Also, you can eat roasted parsnips with a creamy mustard pork chop, salmon or even a grilled steak.

For a flavourful and healthy meal, you can add your roasted parsnips to a roasted vegetable hash with eggs.

Make a heavenly spiced parsnip and cauliflower soup. Add coriander and green chilies to give the soup its characteristic color. For a richer flavor, add spices like turmeric, ginger, and fennel seed.

Another way to eat parsnips is by mashing them.

Nothing will replace mashed potatoes for most people. But you might be one of the few people to make a total switch after trying mashed parsnips.

The first thing to do is boil the parsnips until they’re soft, add butter —or any other fat— and mash your parsnips!

Mashed parsnip is just as creamy and thick as mashed potatoes. Only this; there isn’t a lot of butter —but there’s nothing wrong with that.

You can stop mashing when it’s still chunky, or until it’s as smooth as a puree.

You can eat this delicious mashed parsnip dish with steak, stews, roast chicken or roast pork.

It also tastes terrific with gravies and sauces.

Mashed parsnips taste amazing with Paleo fried chicken and pork tenderloin. You can serve mashed parsnips with bacon chili, cocoa chili, or any other type of chili.

You could also sauté or julienne your parsnips.

Can you Eat Raw Parsnips?

Yes, you can! Just like carrots, you can eat parsnips raw.

Their sweet and snappy flavor makes them extremely satisfying when you eat them raw.

You can also grate them and serve them in a root vegetable salad.

Parsnips make a great addition to a crudite platter, so you can’t go wrong with them on it.

You could also make a shredded parsnip and parsley salad.

First, peel the parsnip with a vegetable peeler, then shave it into thin strips until you get to its core.

In a bowl, add in the shredded parsnips with parsley, lemon juice, apple cider vinegar, olive oil and red onion.

Toss this mixture until it has combined well, then add salt and pepper.

Parsnips are incredibly healthy vegetables. In fact, many people call them the perfect vegetable because of their nutritional value.

They contain a healthy dose of fibre, minerals and vitamins in every serving.

Here are some nutrients they contain, as well as the benefits of eating them:

Parsnips are sources of folate, Vitamin K, Vitamin C and many other essential micronutrients.

To be specific, one cup —133 grams— of parsnips provides the following nutrients:

Furthermore, they are a great source of fiber —both soluble and insoluble. A cup of parsnips contains about 26% of the daily fibre requirement.

An increase in fiber intake will help to treat digestive conditions such as hemorrhoids, diverticulitis, intestinal ulcers and gastroesophageal reflux disease.

Parsnips are relatively low in calories, but they have a slightly high fiber and water content. These three factors contribute to weight loss.

Can You Freeze Parsnips?

Yes, you can! Parsnips, like any other root vegetables, can be frozen.

First, wash the parsnips and cut off the ends and every other part that doesn’t seem edible. When you’re done with this, peel them.

Cut your parsnips into small pieces, then boil some water.

Put the pieces of parsnips into the boiling water and let them blanch for three to four minutes. The duration depends on the quantity and size of the parsnips you want to freeze.

Make sure you have a bowl of cold water near you. Then, transfer the parsnips from the boiling water to the cold water to stop the cooking process.

Drain the parsnips, pat them dry, and put them in plastic containers or freezer bags. Remember to leave about half an inch of space for expansion.

Write the name and date on the containers and put them in the freezer.

Parsnips should last about 18 months at -18°C in the freezer, but it’s best to eat them within twelve months.

You can substitute parsnips with many vegetables which include the following:

Celeriac: Celeriac is a root vegetable related to parsnips, parsley and celery.

It is also called celery root, turnip-rooted celery or knob celery. It looks like a misshapen off-white turnip covered in little rootlets. It has smooth, white flesh like a potato.

It tastes like the upper part of the celery stem, and you can cook it or eat it raw.

Carrots: These aren’t a surprising substitute since they are cousins to parsnips. Carrots are also root vegetables. In fact, many people call parsnips white or ghost carrots.

Salsify: They are quite similar to parsnips, except they are longer and slimmer. Salsify has a thick skin and creamy white flesh. They belong to the dandelion family.

Turnips: These shouldn’t come as a surprise, since they are both winter vegetables that are sweet and high in fiber. Turnips make great substitutes for parsnips in most recipes.

Parsnips are root vegetables with a sophisticated taste. Depending on the parsnip you try, the taste can vary slightly.

Either way, the best way to know how a parsnip tastes is to eat one. You have nothing to lose by eating such a nutritious vegetable.