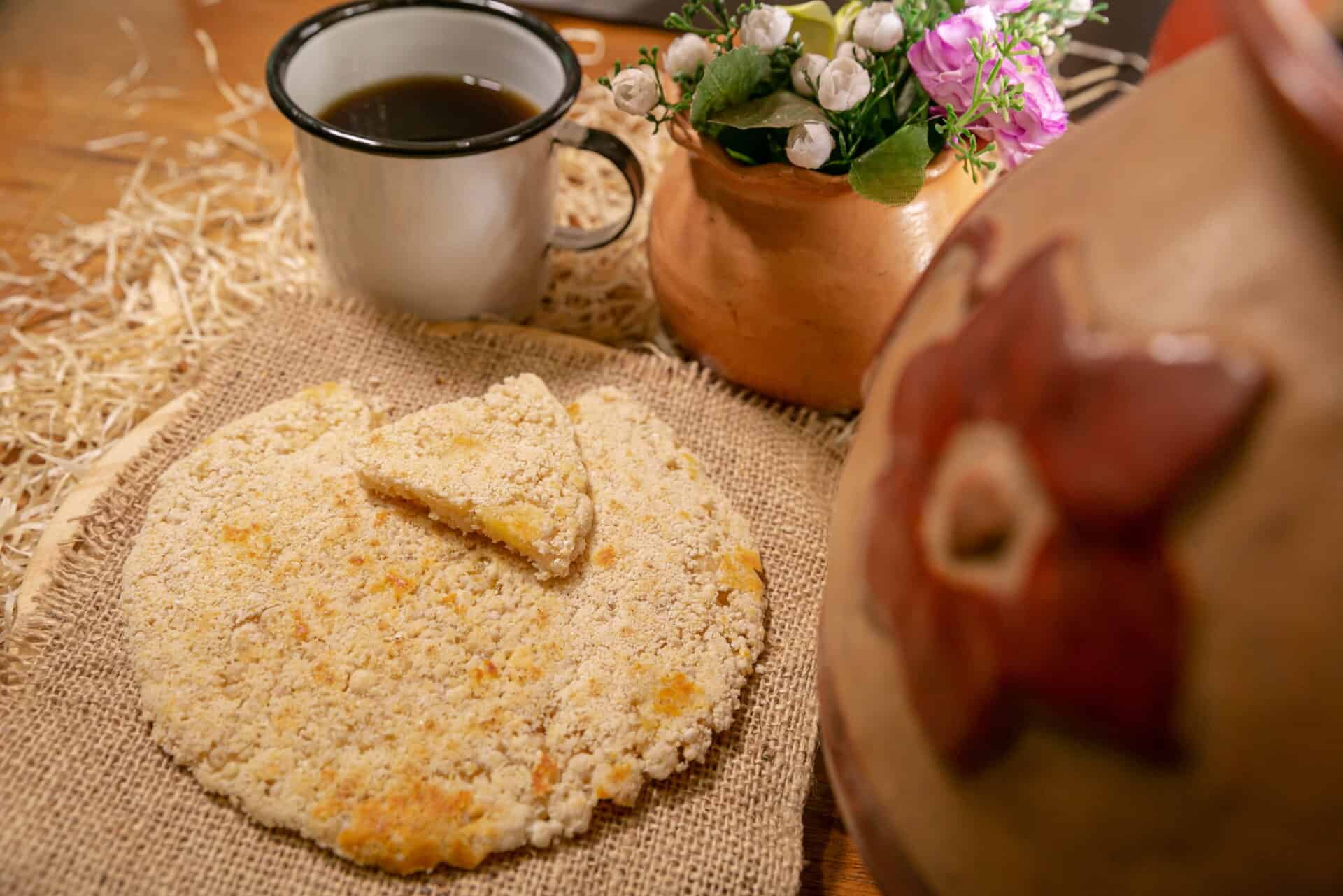 Wedged between its much larger neighbours of Argentina and Brazil, and having been colonised by Spain, Paraguay’s food takes influences from both the Iberian Peninsula and the Guarani people who have traditionally populated the region.

More recent influences include Italian staples brought over by immigrants, as well as hamburgers and other fast foods.

Barbequed meats, freshwater fish, and corn-based dishes are all popular, as you’ll discover as we take you on a tour of Paraguay’s top traditional dishes. 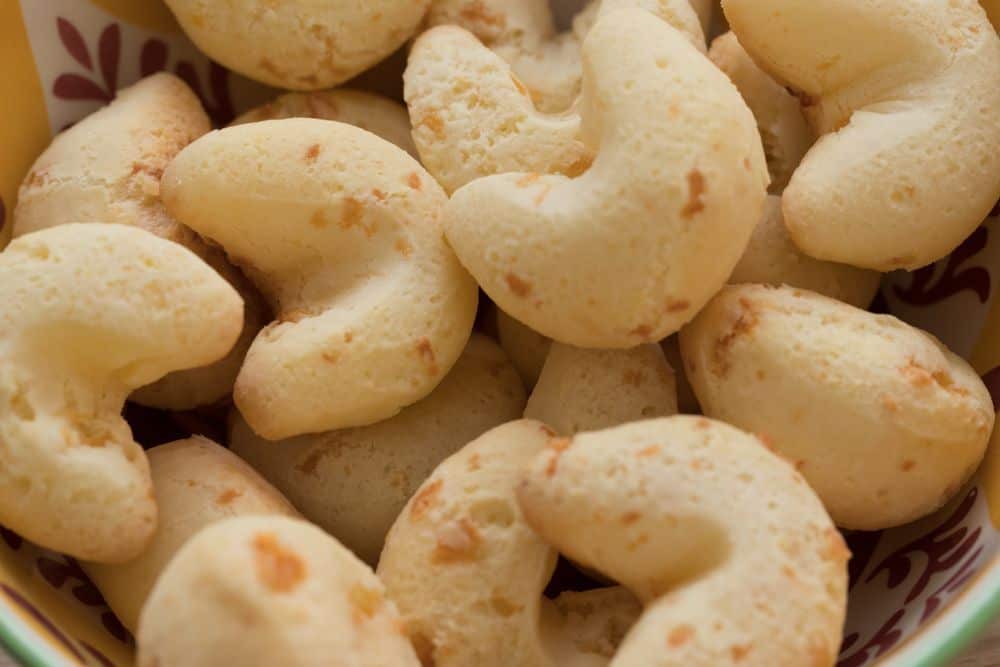 Chipa is a type of Paraguayan bread or cake made from ground cassava (manioc), eggs, and cheese, but without any yeast.

Often served as an accompaniment to the asado, it is also a popular breakfast in Paraguay.

Chipa originate with the Guarani people, and are most commonly seen baked as small bread rolls sold in small bags on the street or at transport hubs in the morning.

Chipa mbocá is however baked around a stick, giving it a firmer overall texture, while chipa guasú sees the ground cassava replaced by corn flour. Chipa manduvi are made with a blend of corn flour and ground peanuts, and chipa so’ó come stuffed with minced meat.

Yerba mate is a caffeine-containing plant native to Paraguay and the surrounding area from which a form of tea, or mate, is produced by allowing its leaves to stew in hot water.

It is drunk by filling a cup or hollowed out gourd that fits comfortably in the palm of your hand with the dried leaves of the yerba plant until the container is three-quarters full.

The container is then completely filled with hot, off-boiling water and allowed to infuse the leaves. Sugar can be added as desired, to create a flavour not dissimilar to herbal teas.

It is drunk with a special straw made from metal or wood called a bombilla that prevents the drinker swallowing the leaves. A single gourd is often shared around a group of friends or family, being refilled with hot water as the mate is drunk.

When served cold, on hot days, it takes the name tereré, when the water can be replaced with lemonade or fruit juice.

It is a small fried cake in the shape of a disc and is prepared using cassava, to which minced beef, garlic and cooked onion pieces are added together with seasoning and breadcrumbs.

Alternative versions also include small pieces of pork fat, which melt while the lampreado are cooking to produce a richer taste.

Its generally served with a green salad in an attempt to make it slightly healthier.

Though when translated literally it means ‘Paraguayan soup’, sopa paraguaya shares few if any features with a soup, being more akin to a corn bread or a savoury cake.

Prepared in a large square oven dish, this spongy concoction is traditionally prepared using corn flour, cheese, and milk or cream alongside thinly sliced onion. As a result, it is high in both protein and calories, like many of Paraguay’s traditional dishes on our list.

This is thought to have come from when the country was at war in the 1800s and food was rationed, meaning dishes needed to be as rich in energy as possible.

Variously going by the name salad Olivier or ensalada rusa (Russian salad), this dish doesn’t have a lettuce leaf in sight.

Instead, its main ingredients are generally considered to be chopped boiled potatoes, carrots, and green beans, combined together by mayonnaise.

Ensalada rusa is used as a side to many of Paraguay’s other dishes, and can also be enjoyed as a starter course in some restaurants.

A staple of Paraguayan cuisine, mbeju (or beiju) is a thin pancake-like dish made from either cassava starch or cassava flour (farina), with its origins with the Guarani people of the eighteenth century.

Though the exact preparation method differs from person to person, generally speaking pieces of pork fat and crumbled cheese are mixed together to form a sort of cream.

At this point eggs, together with milk and salt are added and mixed, followed by cassava starch sifted to remove any lumps, creating a dry cake mixture.

This mixture is placed into a well-oiled pan under high heat and cooked until it takes on the consistency of a cake.

Mbeju cuatro quesos is an alternative version of the dish which uses an identical preparation method, but greater quantities of cheese, and translates as mbeju with extra cheese.

Either form or mbeju are served with mate as a snack, or as a side dish.

Describing both the method of cooking meats on an open fire or barbeque and the social occasion that has developed around this way of cooking, asado has a long history in Paraguay.

Meats cooked at an asado can be as varied as beef, pork, lamb, and chicken, and are usually placed on a grill called a parrilla over charcoal or burning embers. You’re also likely to find sausages and various forms of offal, including morcillas (black or blood pudding) and mollejas (sweetbreads).

It is these fast cooking cuts that are served first, followed by asado de tira (ribs), chicken, vacio (beef flank) and other larger cuts.

In the countryside, a version of asado called asado al disco exists which utilises the worn-out parts of a plough as a makeshift grill, with peppers and onions placed around the meat to flavour it as it cooks.

Red wine and beer, bread, and simple salads that help cut through the richness of the meat are all part of the asado experience.

The asado cooking is normally the domain of men, with women preparing the side dishes such as the salads.

Pastel mandi’o is a snack food consisting of a corn flour and cassava (mandi’o in Guarani) pastry stuffed or wrapped around minced beef and then deep fried.

Although they look similar to empanadas, which are popular across South America, they differ in their flavour profile, largely through the use of these two forms of flour and are therefore special to Paraguay.

You can find them being freshly prepared on the street, or served alongside your drinks in a bar, and often come with a spicy dipping sauce, and a sprinkling of salad.

Kivevé is a mildly sweet dish made by pureeing a winter squash called andai, making it the Guarani equivalent of pumpkin pie.

It has the creamy texture of a thick custard or even a loose dough.

To the boiled and mashed squash is added corn flour, cheese and sugar, together providing the consistency and sweetness that enables kivevé to be offered up as a breakfast food, dessert, or afternoon snack.

Milk is often brought to the table alongside kivevé, so that dinners can add as much or as little as they want.

This traditional fish soup is usually prepared using freshwater fish from the rivers of Paraguay, given the country’s distance from the nearest ocean.

Usually mandi’y or tare’y are used, two types of catfish common to the area.

The soup is prepared by first frying vegetables including onion, tomatoes and peppers in pork or beef fat.

When gently cooked, the fish is added raw alongside seasoning and spices. As the fish cooks, the soup beings to thicken and is ready to serve, topped with some diced chillies.

Bitter-sweet kosereva is a type of confectionery with origins firmly inside what is today Paraguay.

Looking similar to sticky dates, kosereva is made from the skin of ripe pintonas sour oranges that are boiled in molasses.

The sweet and sour combination of sour orange and molasses is balanced by adding a little sugar as necessary, with the resultant confections chewed across the country as a snack and a much-loved treat.

Its name is a truncation of so’o josopy, meaning crushed meat in Guarani.

The soup is begun with the labour-intensive job of pounding the meat with rice until it forms a paste, although nowadays a blender or food processor is also used to the same effect. It is then placed in cold water, which helps keep it fresh.

In the meantime, onions, tomatoes and red peppers are roughly chopped and heated in a deep saucepan. A little flour is added to coat the vegetables and thicken the soup, and then the pureed meat with its water.

The ingredients are boiled together in the saucepan, and finished with herbs and seasoning.

An alternative version of soyo exists in which the meat is not pureed by chopped into small pieces and then boiled alongside the other ingredients, with this version known as so’o josopy ita’y.

Mazamorra (or kaguyjy) is a Paraguayan dessert made from cooking down the local locro variety of maize into a gruel or porridge.

When ready to serve, it is accompanied by one of the following ingredients to make it sweet on the tongue: milk (making kaguyjy kambyre), honey (kaguyjy eirare), or refined sugar (kaguyjy azucáre).

Vori vori is a thin Guarani soup or broth containing dumplings made from a mix of cornmeal, corn flour, cheese and a little liquified fat to hold it all together.

Once these dumplings have been prepared to the size where they can be eaten in one bite, they are added to the hot broth until warm themselves.

Vori vori is also commonly served with thin strips of already-cooked chicken among the dumplings, listed on menus as vori vori de gallina.

You’ll find vori vori mainly served during the winter months, when people are looking to eat something warming.

Most comparable to polenta, although both the taste and method of preparation differ between the two, mbaipy is a starchy carbohydrate side dish normally prepared with corn flour, giving it a yellow colouring.

While traditionally made using corn flour, mbaipy can equally be prepared from any starchy flour, including cassava and wheat flour, both of which are common ingredients in the country.

Acting as a base on which other ingredients and flavours are added, a portion of mbaipy is most likely to be accompanied by onions and other locally-grown vegetables, Paraguayan cheeses, and meats.

Chicken is the most common meat used, although chorizo-like sausages are also popular.

The dessert dish mbiapy he’ê is similar but served with molasses and milk to provide the necessary sweetness, so don’t be surprised if you also find mbiapy listed as a sweet as well.

This dish of breaded meat escalope was brought to Paraguay close to 150 years ago by Italian immigrants and has been accepted by people here to such a degree that it’s now a traditional Paraguayan food as much as mbiapy or asado.

It can be made using thin filets of beef, veal, chicken or pork that are first coated in beaten eggs before being covered in breadcrumbs and shallow fried.

In addition to being served as a main meal, milanesa are also served as a tasty sandwich filling. When topped with egg yolk, the escalope is known as milanesa a caballo.