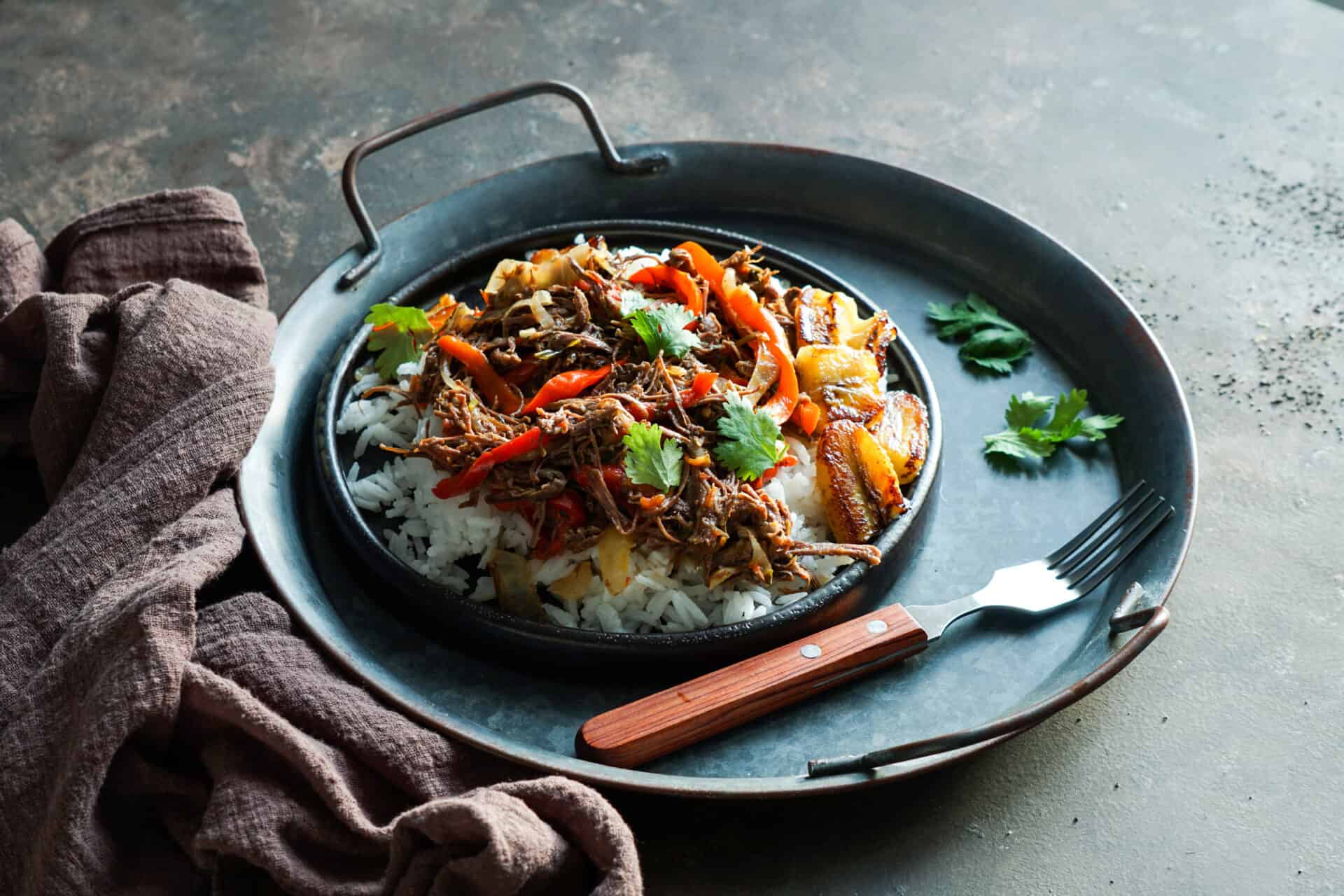 Panamanian cuisine is traditionally rooted in Spanish and African indigenous cultures. It also has roots to the Native American population.

Many of the foods you will find in Panama are similar traditional foods of places like Venezuela, Ecuador and Colombia. This is less surprising when you consider that they all used to be part of “Gran Colombia“.

Panama natives make their foods unique by their culinary dexterity that gives a new dimension to what might count as popular foods otherwise. Here are some of the top local dishes in Panama. 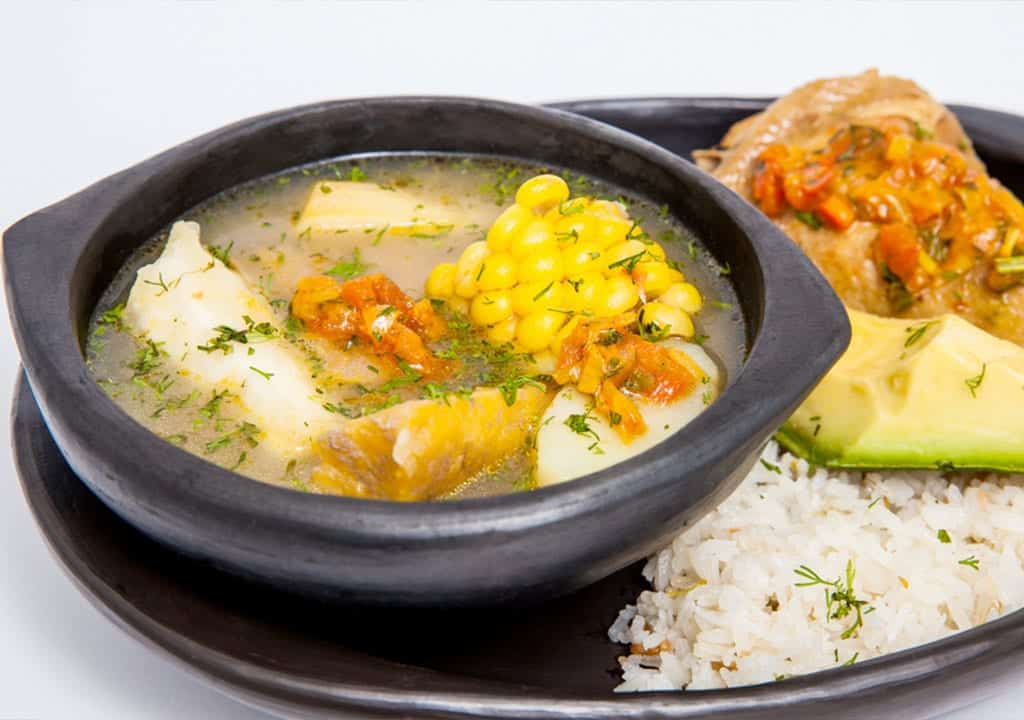 Sancocho is a delicious traditional soup. It is a light chicken soup that contains different ingredients and herbs.

Yuca, potatoes, plantains and chicken are some of the ingredients of sancocho. It also contains culantro, a herb that is similar to cilantro but has a strong flavour.

Locals also use mazorca — corn on the cob; ñampi — a tropical root vegetable; garlic, chopped onions, hot sauce and oregano. Some also include beef as an ingredient.

Beyond being a choice dish in Panama, sancocho has been used to symbolize the racial diversity of Panama.

The sancocho recipe originated from the Azuero region. Over time, other regions developed their own variations.

Consequently, the dish can be made using a wide variety of ingredients. Sancocho is seen as the national dish of Panama.

The soup is typically served with tortillas or any rice preparation. It has sundry flavours that are reflective of the yellow onions, scallion and tomatoes in it.

The name comes from a legend about a man who ran out of food while serving his guests. It is said that he took one of his garments and made a stew from it.

As a beef stew, ropa vieja is spiced with cumin, black pepper and oregano. The beef preparation can be eaten as both breakfast and a lunch dish.

In Panama, tostones are called patacones by the locals. They are fried green plantains.

Plantains are in the same family as bananas, even looking the exact way, only bigger. However, they are actually the starchier version of bananas that are usually cooked before consumption.

Bananas, on the other hand, function adequately as just snacks.

The name ‘Tostone’ is derived from the word meaning “to toast” in French. Patacones are toasted not once, but twice.

They are fried once, patted down and flattened, then put back in the oil to be toasted a second time. This is to make it extra crunchy.

They are typically salted to taste like yummy banana chips. They are best served with ketchup or tomato sauce.

They are typically light and tasty. They can be eaten as a snack just like potato chips, or as a side dish.

Carimañolas are stuffed yuca fritters. They are like a stuffed breakfast meat pie. They are also a popular afternoon snack in Panama.

They are usually torpedo-shaped, although some natives experiment with other shapes as well.

Carimañolas are stuffed with seasoned ground beef and cheese before they are fried in oil. The beef used to make carimañolas are usually boiled beforehand.

This locals’ favourite is a wholesome pie that they enjoy hot when it is freshly made. They also serve it with sauces like Suero Costeño to enhance its taste even further.

Chicheme is your conventional beverage in Panama, but to an outsider, it might seem that appetizing.

The drink is made from sweet corn. Surprisingly, it is refreshing and delicious.

Chicheme is made by boiling corn for a very long time. Evaporated milk, cinnamon, nutmeg and sugar are boiled with it.

Some locals prefer to use almond milk and vanilla flavour.

The delicious drink can either be had warm or served ice cold. It is also extremely filling, keeping you from getting hungry quickly.

While drinking chicheme, you will taste the soft boiled corn along with a rich, unique milk and nutmeg texture that favours any sweet tooth.

Carne guisada is an assortment of beef meat and potatoes that are cooked with sofrito sauce and tomatoes. The meal is rich and filling in and of itself.

It is a full-fledged main course, extremely wholesome and flavorful. However, carne guisada can be a side dish for multiple dishes. Locals eat it with rice servings and tortillas.

Panamanian corn tortillas are thick corn cakes that are unlike the more popular Mexican tortillas.

Panama’s variation is much thicker and circular in shape. The tortillas are made from corn dough.

Hojaldras is the Panamanian equivalent of fried bread and it is usually served for breakfast. Hojaldras is prepared differently, with the dough sitting overnight before it is cooked. Most people make these delicious treats for a lazy weekend brunch.

Natives eat hojaldras with just about anything that goes with bread — from fried eggs to cheese slices to butter spreads. Although some people enjoy them with sugar and some bacon on the side.

On a regular morning in Panama, you can usually smell a combination of Hojaldras, steak, huevos fritos and salchichas dipped in tomato from every window.

Yuca Frita describes a sumptuous delicacy of Yuca roots fried in canola oil. By all standards, this dish constitutes a wonderful side dish when you want to be adventuristic.

Similar to French fries, the dish has a mild flavour, and a somewhat grainy texture complete with a creamy taste. There are two things that stand out for the Yuca Frita: its crispiness and its tangy flavour.

The tanginess comes from the Yuca roots being fried with some drops of lemon.

Most locals enjoy their Yuca Frita with a sprinkling of salt and some form of garlic salt. Even so, it is more often served as a side dish to complement the table.

Cocadas are absolutely marvellous coconut treats that every Panamanian loves. These delightful cookies are made from soft coconut mounds vanilla, cornstarch, and almond extracts.

Also, instead of eggs, natives in Panama add a generous helping of sweetened condensed milk to liven up the mix.

Cocadas are popular as a dessert that rounds off the meal with a bang. They often come out of the oven with a golden colour.

However, some people play around with cocadas and add colouring to make them a bit fancier.

Platanos Maduros is essentially ripened plantains with a fun twist. They make up a very sweet and tasty dish that is a perfect accompaniment for main dishes such as coconut rice.

The essential ingredient is to fry the softened plantain in a mix of vegetable oil, cinnamon, butter and vanilla. Many describe it as an overload of sweetness.

However, the plantain must be very ripe. Otherwise, the sweetness of the dish may not be as evident. Platanos Maduros may be served with a variety of helpings including cheese and gravy.

Christmas is never complete in Panama without a generous helping of Panamanian tamales. The tamale is usually made from plantain leaves and cooked with corn dough, raisins and some broth. Then, it is stuffed full of tasty chicken.

Asides from being popular as a Christmas delicacy in Panama, natives also enjoy servings of Panamanian tamales as a signature dish at weddings.

In most cases, the dish is served alongside fried plantains, raisins and sauces made from tomato. Panamanian tamales are undoubtedly an absolute delight to the taste buds.

Caldo De Bolas De Verde is a tasty and flavour-filled soup that originated from the coastal region in Ecuador. However, they’ve quickly become popular in Panama as a local delicacy.

The soup contains dumplings made from green plantains and set afloat beef broth of corn, yuca and vegetables. Locals describe this dish as beautiful and tasty.

‘Bistec’ translates to steak while ‘Picado’ means ground or minced. Essentially, Bistec Picado is a sumptuous full dish made from minced pieces of meat embellished with various spices.

Traditionally in Panama, most locals use tomato sauce for this dish, and they top it off with bell peppers, onions or chilli.

Not surprisingly, natives love this dish because of the rich flavour of the cooked meat garnished with various spices and condiments.

The primavera salad is particularly favoured by vegetarians in Panama. Nonetheless, everyone enjoys it just the same. The salad is packed with a ton of vegetables and can function as a healthy lunch or a lovely side dish.

Primavera consists of a combination of pasta, fresh vegetables,  green pies, and an assortment of peppers. Some cooked asparagus and cheese may also be present.

Although the salad is usually used as an accompanying dish, it certainly makes the main dish a lot more satisfying. Its best advantage is the healthiness and tastiness it combines in one dish.

Ron ponche is a beverage that qualifies as the Panamanian version of eggnog. Ron ponche is more commonly made and enjoyed during the festive holidays.

For instance, during  Christmas and the New Year, it is, particularly, in high demand. Ron ponche is a tasty refreshing beverage made from vanilla extract, egg yolk, and of course, milk.

Also, there is the signature addition of some quantity of rum.

Typically, a glass of ron ponche is not supposed to be downed in one sitting. Instead, it is to be sipped and savoured in a similar manner as you would liquor.