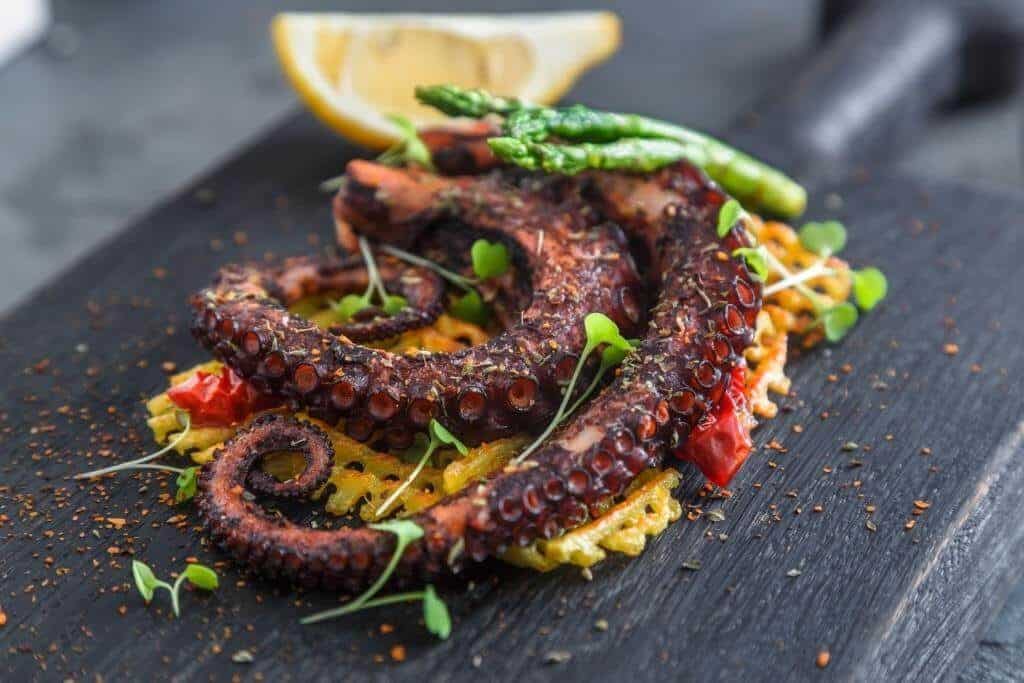 Octopus is one of those foods many people haven’t tried before.

You may be hesitant to try it at first. However, it could easily become one of your favorite foods when cooked right.

Even though it’s hard to describe flavors, this article will try and explain the taste of octopus in case you’re not an adventurous eater.

While it may seem like a scary thing to eat, it is a common dish in different cultures around the world.

Octopus is most commonly found in Japanese and Chinese cuisines, but you can also find it in Mediterranean, Caribbean, and Portuguese cuisines.

It is a staple in Japanese sushi dishes. It may be grilled over an open flame in Greek dishes, served as carpaccio or with pasta in Italian dishes, and served in ceviche in the Caribbean.

Octopus is both nutritious and filling. It is high in protein, iron, vitamin B-12, and selenium, but low in calories and fat.

Octopus is far from being tough, slimy, or chewy when properly prepared. In fact, it has a similar texture to that of lobster.

The taste of cooked octopus is similar to the taste of squid or calamari. Octopus is usually more tender than calamari.

Some people say cooked octopus tastes like chicken, and others compare it to pork. When cooked properly, it should be moist and light. The flavors are largely dependent on the flavors added to them while cooking as it has no distinguishing taste.

In general, octopus is flavorless until marinated or cooked in a sauce.

Unlike some seafood, this one doesn’t carry the smell of the sea with it. The bottom line is that the taste of octopus predominantly depends on the way it’s prepared.

How to Cook Octopus 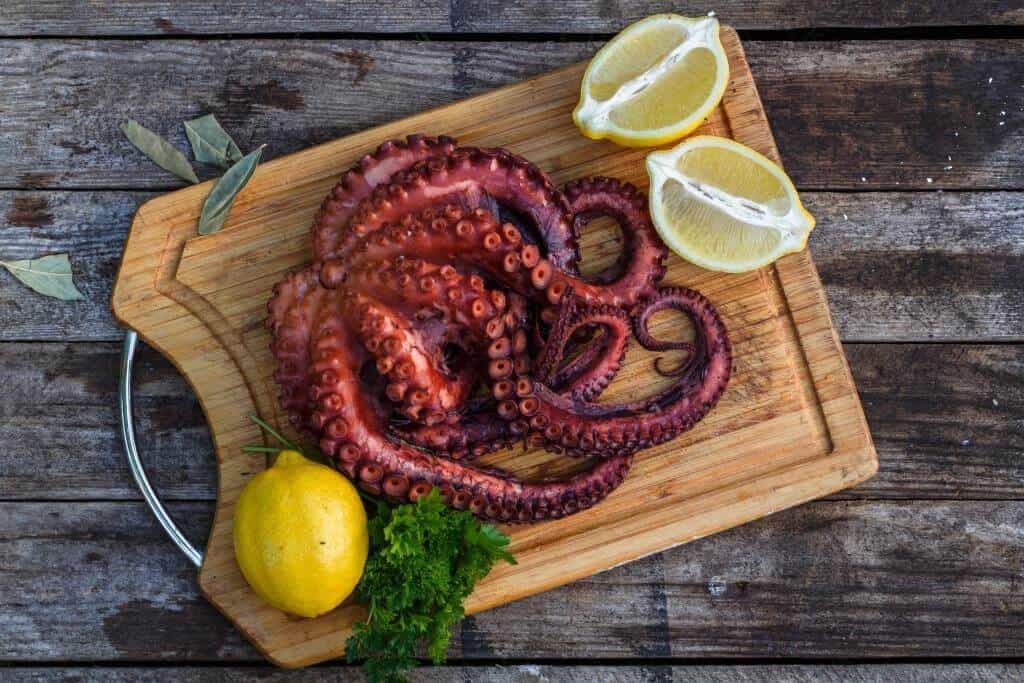 Fancy restaurants are not the only place you can eat octopus. You can prepare this delicacy at home, although it takes some time and effort.

The first thing to do is to choose the right octopus. If you get a cleaned octopus, it’ll be more expensive but far easier than cleaning it yourself. If you still choose to buy an uncleaned octopus, you should remove the stomach, ink sink, and outer membrane.

Generally, you can either cook octopus low and slow, or high and fast. Whatever method you choose, you’ll get tender and delicious meat.

Blanching the octopus in boiling water for half a minute is one of the easier ways to prepare it. This also stops it from getting tough at the same time. You can then bake it in the oven covered at 200°F for 4 to 5 hours.

You can also fry, grill, or boil the octopus, as well as make a delicious octopus salad.

How to Grill Octopus

Grilling is one of the most popular ways to prepare your octopus.

Throwing it on the grill will give some smoky flavor to the dish. However, don’t forget to pre-cook your octopus before taking it to the charcoals on the stovetop or in the oven.

If you add the octopus straight to the grill, it’ll be dry and tough.

Begin with cooking your octopus by either boiling or roasting it to make sure it’s tenderized. Then, coat it in olive oil and salt and pepper and dress it before throwing it on the high-temperature grill.

Cover the grill, but don’t forget to flip it once during the cooking time, which should last about five minutes. The octopus is ready when it’s perfectly brown. Then, dress in some olive oil, herbs, and fresh lemon.

Many restaurants in Korea serve live octopus to prepare the controversial dish Sannakji. It is essentially chopped octopus with some sesame seeds, sesame oil, and a dipping sauce called gochujang.

Although the animal is not alive, the tentacles are squirming around because they have been chopped off right before serving.

The raw octopus has a hint of sea flavor. It’s more rubbery than when cooked.

It is reminiscent of a firm Jell-O in texture. It’s a really strange sensation, especially with the tiny suction cups on the tentacles that stick to the sides of your mouth and your tongue.

The most important thing is to chew thoroughly due to the risk of choking hazards.

Believe it or not, the active suction cups are so dangerous that they kill up to six people a year.

If you chew it well, there’s nothing to worry about.

Perfectly grilled octopus is tender, and succulent, with a crispy outside and a slightly smoky flavor.

It is delightfully meaty and comforting. The meat reminds of chicken, lobster, or pork, but the texture is different.

In general, it has the taste of the spices and condiments it’s served with.

It’s not chewy, tough, or gelatinous like the raw octopus. For perfect taste, the octopus is pre-cooked before being grilled.

How to Cook Frozen Octopus?

All you have to do is thaw the frozen meat before cooking by placing it in a large bowl. Then cover it with a wet paper towel and keep it in the fridge until completely thawed.

Place the octopus in a large bowl of cool water and kosher salt, and refrigerate for 5 hours to break down muscle tissue.

Then, blanch the meat by dipping it in boiling water for three seconds. Do this three times.

To make the octopus more tender, braise it slowly at low heat. Put it in a large pan, making sure it’s covered with a braising liquid.

You can also cook it in a dry pot in its own juices. Either way, braise the meat for 4 to 5 hours in a preheated oven to 200°F.

Finally, take the octopus out of the oven as soon as it’s done, as it may overcook.

How to Cook Octopus in Greek Style?

Boil the tentacles in a large pan together with bay leaves and red wine vinegar on medium-low heat for about 50 minutes. Don’t add water or salt. Once boiled, it should be crunchy.

Then, drain the tentacles and add them to a very hot pan. Fry them for one minute until they get a nice color. This will make the meat crispy on the outside.

Add chopped tomatoes and onions into the pan with some garlic and olive oil and stir. Cook for five minutes and deglaze with the vinegar.

Pour in the water where the octopus was boiled, and add a bit of honey. Season with ground pepper, add some chopped parsley, and cook for 3 to 5 minutes.

How to Make Octopus Salad?

There are many octopus salad recipes, each one including unique ingredients. One great way to make an octopus salad is to boil the tentacles for about 2 hours, or until tender. Let them cool, and then clean and slice them.

How to Fry Octopus

Just like grilling, this cooking method also requires pre-cooking the octopus in boiling water. Let it boil slowly. Once the cooked octopus cools down and drains completely, pan-fry it briefly in a hot skillet, adding the whole tentacles to the oiled pan.

This should make it slightly caramelized on the outside. Fry it for about eight minutes per side. You can also slice the tentacles into thin pieces before frying to reduce the time of cooking, which will take about two minutes per side.

Can You Eat Octopus When Pregnant?

Yes, you can eat octopus when pregnant provided that it’s cooked properly.

This amazing source of protein and lean meat contains iron and vitamin B-12 which are crucial for the proper cognitive development of the baby.

At the same time, it’s low in calories and fat, which is great for pregnant women.

However, octopus belongs to the group of seafood with low to moderate mercury levels, so it’s recommended to eat not more than 12 oz a week. Pregnant women shouldn’t eat raw or undercooked octopus.

Octopus is a food many haven’t tried. If you haven’t had the chance to taste it, it is similar to squid or calamari.

It should be moist and light after being cooked but because the flavors are quite light, the cooking method can greatly influence its taste too.