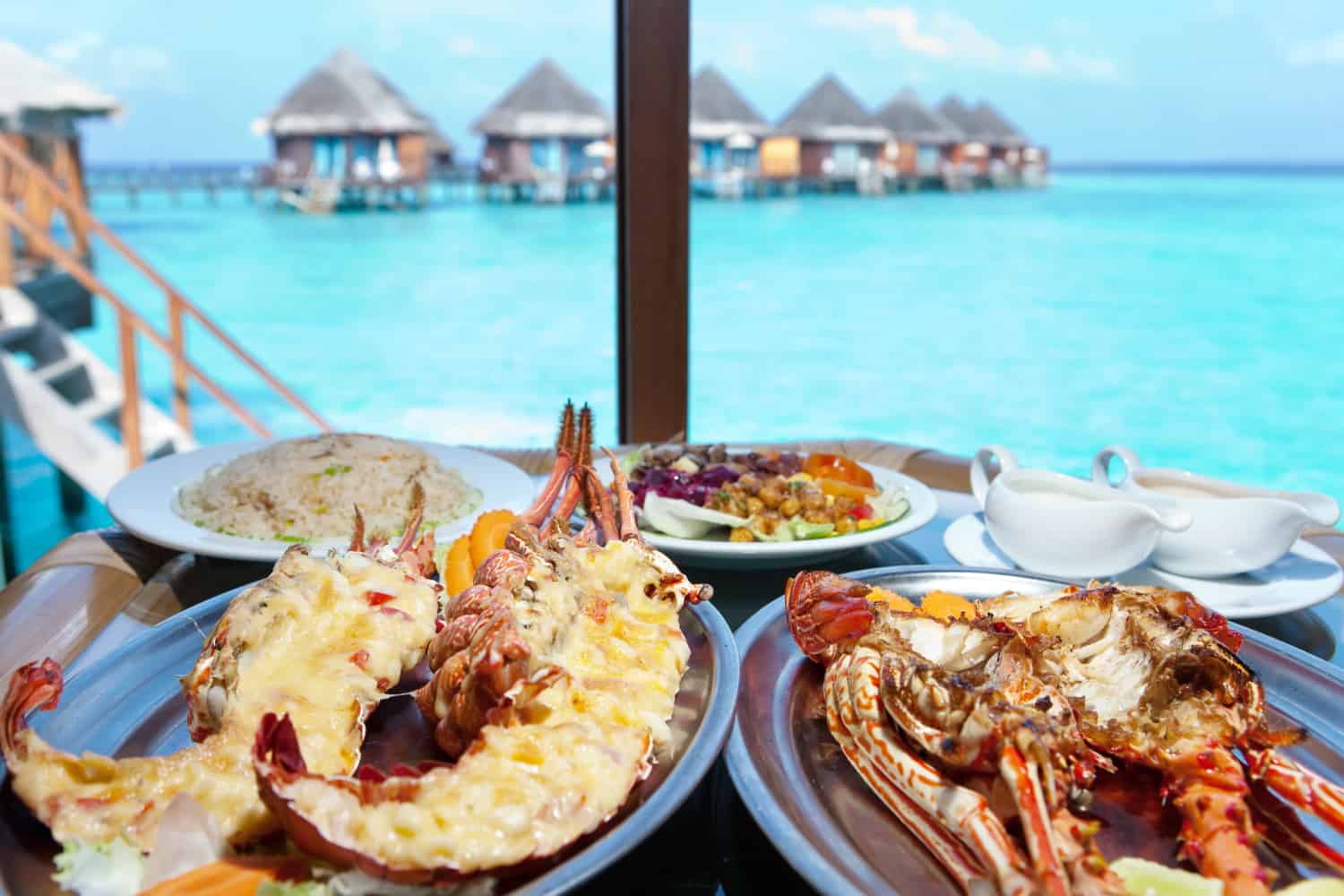 Known for its tropical beaches and crystal-clear seas, the Maldives also have a fascinating culinary culture, sometimes called Dhivehi cuisine.

Located several hundred miles from India and Sri Lanka, its nearest major landfalls, its 26 atolls lie across the equator in the Indian Ocean. Fish and seafood therefore play a key role in many of the country’s traditional dishes.

Influenced by at least 800 years of Islam, there have been strong trade links with both Asia and Africa for centuries. This has led to a huge diversity of foods and spices used in its cuisine, while native crops like coconuts are also important.

More recently, it has also seen some input from Britain, who governed the country as a protectorate from 1887 until independence in 1965.

Here are the most delicious dishes you’ll find that can be found in the Maldives. 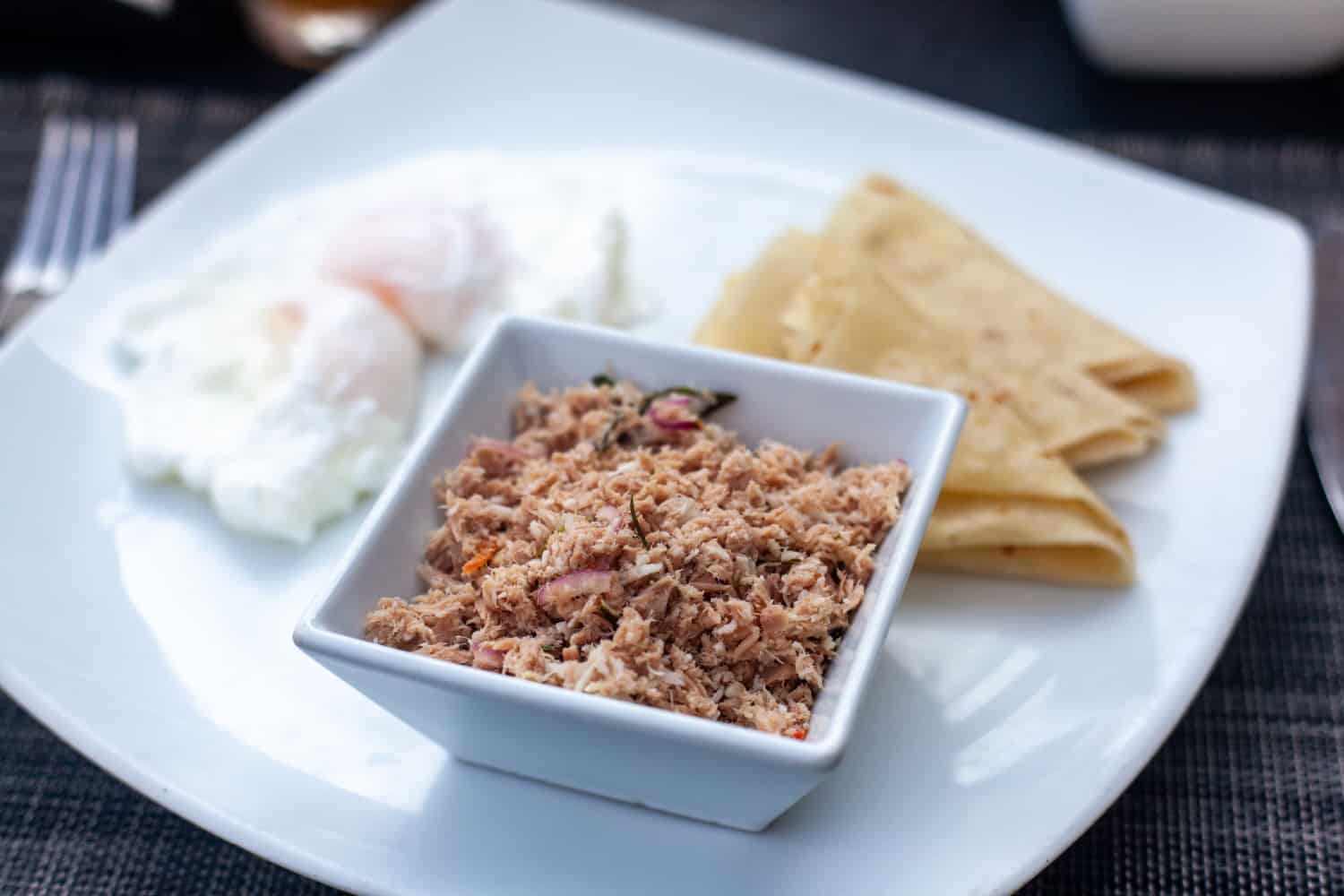 A common Maldives breakfast food, mas huni uses two of the primary ingredients in the country’s cuisine – tuna and coconut.

It comprises finely chopped tuna (often from a can), together with onion and chilli peppers mixed with the flesh of a freshly-opened coconut.

The coconut flesh is traditionally grated using an implement called a hunigondi, which consists of a low chair with a blade at one end over which the inner side of coconut shell halves are scrapped.

A variation called baraboa sees mas huni made with butternut squash instead.

Mas huni is normally found served with roshi, the Maldives’ version of India’s roti flatbreads, and a glass of sweet tea, the standard way to enjoy the drink on the islands.

Bonda, or bondi in the plural, are one of the foodstuffs that demonstrate the important influence of foods from the Indian subcontinent on the cuisine of the Maldives.

A snack food that can be considered a form of savoury doughnut, in India bonda are made with a mixture of mashed potato or vegetables. In the Maldives, it’s far more common to find bonda made with sweet potato, cassava, or taro.

As a result, Maldives bonda can have a sweeter profile than their Indian counterparts. Made into a batter, the ingredients are then deep-fried. Bondi are best eaten as soon as they have cooled.

Bondi are easy to find on the streets of Malé, the capital of the Maldives, and other towns and settlements across the islands.

Rather than the chopped canned tuna of mas huni, fihunu mas is a dish that focuses on a whole fish.

A number of different species are used in the preparation of fihunu mas, with almost any medium-sized fish caught in the waters around the twenty-plus atolls used.

Once gutted, the fish can be scored to allow the marinade flavours to enter the fillets more easily. The marinade is thick rather than oily. It is deeply aromatic, with spices such as cumin, as well as having a spicy heat from the addition of chilli peppers.

Usually, fihunu mas is cooked on a grill over an open fire, which adds a further flavour profile from the light smoke that infuses the fish.

Addu bendi (also spelt bondi) come from Addu Atoll, the southernmost island group that forms the Maldives. Still made on this atoll but shipped across to the other atolls in the country, addu bendi are a popular sugary snack.

Looking like a sausage wrapped in brown paper, addu bendi are in fact a confection made from a blend of grated coconut and golden syrup.

These ingredients are combined using a little water flavoured with jasmine to form a solid sweet comparable to fudge in overall texture.

It is wrapped in a dried banana leaf, and eaten in homes across the country by slicing off a small piece.

This sambal – a sort of sauce or blend – is an important part of Maldives cookery, and is so tasty it’s made its way across to Sri Lanka, where it is known as maasi sambal or umbalakada.

The dried fish component of the sambal comes from tuna, which is gutted, boned and dried in the sun. This preserves the flesh for weeks on end, although it does mean the small flakes it is broken into are tough like jerky or other dried meats.

In fact, the tuna develops a strong meat-like flavour, which many compare to beef. It is also quite salty, which together with the rich meat flavours creates a very moreish quality.

To make this dried fish sambal, all you need is the fish, fresh onions, and curry leaves. Each of these three ingredients are shallow fried separately, before they are mixed together with lime juice and chilli.

Taking the trade in foodstuffs in the opposite direction, mas riha stems from the coconut curries of Sri Lanka and the Tamil dominated southern stretches of India.

Like mas huni, mas riha is often eaten at the start of a day for breakfast, and served alongside roshi or plain white rice, and a glass of tea.

Most commonly, this curry dish is prepared using fresh rather than canned tuna. It is cut into small pieces, and cooked slowly on a low heat in water infused with various spices. Onions are generally added and cooked off before the water is poured into the pan.

After the pan has been left to simmer for some time, coconut milk is added a few minutes before serving.

This chicken dish is another that has been adapted and evolved after making it to the Maldives from India.

Unlike other curry dishes, tandoori chicken consists of a thick marinade or coating. This is made from a mixture of spices (for flavour) and yogurt (which has a cooling effect on the tongue) that is smothered over the meat before it is baked in a traditional tandoor clay oven.

The very best tandoori chicken is not overly hot with spice, but also has sweet and smoky notes because of the way in which it is cooked.

The spice mix used is quite extensive, but can include tamarind, sumac, paprika and garam masala.

If you thought the inclusion of tandoori chicken above meant the end of the tuna-based recipes, you were wrong.

Bis keemiyaa are tasty pastries made with tuna and egg. A perfect savoury accompaniment to a sweet cup of tea, they are generally eaten as a snack or appetizer rather than as a main meal.

The tuna and hard-boiled eggs are broken into small pieces so that these pastries are easy to eat. In addition, the filling includes ingredients such as onion and cabbage, while chilli is another important component.

Bis keemiyaa can either be deep-fried, or oven baked.

Another traditional food eaten with tea are kulhi boakibaa, which are a type of fish cake. It is believed that they have been enjoyed on the islands for centuries.

Traditionally, kulhi boakibaa have been eaten at festivals and during celebratory events, although they are now much more widely consumed.

Fresh tuna is the fish of choice for this dish, which is joined by coconut flesh and chilli, the basis of much Maldives cuisine. But these fish cakes also include onion and grated ginger.

The patties are made by combining this fish and coconut mix with pre-soaked rice that has already been ground down to form a sticky paste. This acts as the binding agent, in much the same way that potato is used in other forms of fish cake.

The most authentic way of cooking kulhi boakibaa is in a large pot covered by burning coconut shells, meaning both sides of the cake cook at the same time.

Garudhiya is a popular fish soup found in the Maldives. You won’t be surprised to learn that the fish in question is generally one of the many species of tuna that live in the bright waters here.

Eaten regularly across the country, garudhiya has one of the simplest recipes and ingredients list of any of the delicious dishes we have chosen to highlight.

The tuna is placed into a saucepan with a chopped onion, peppercorns, curry leaves and water. Together then form a simple broth in which the tuna is poached.

The soup is served with lime and chilli to finish.