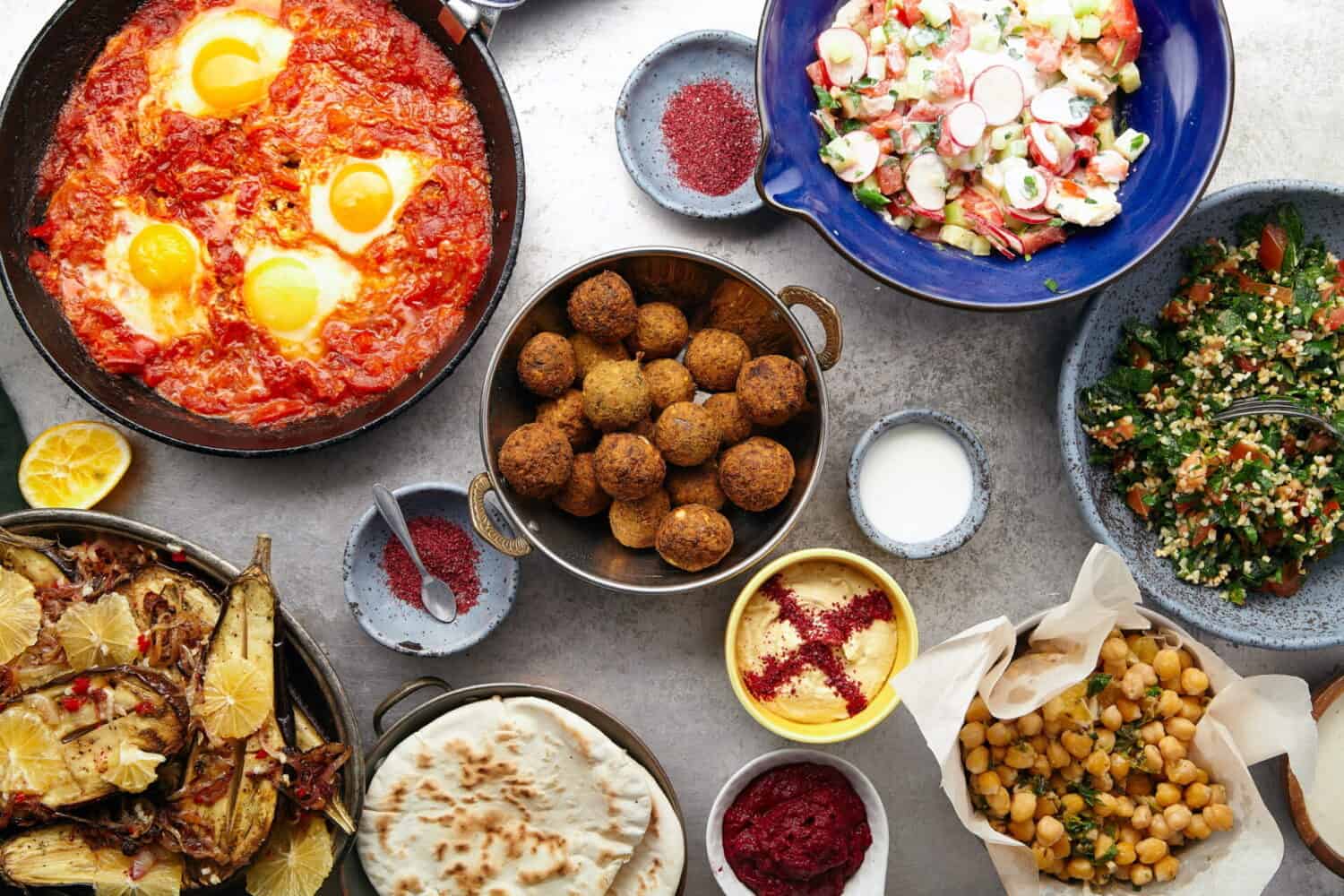 Lying at the eastern end of the Mediterranean Sea, Israeli cuisine is a blend of Mediterranean, European, and Middle Eastern flavours.

To this impressive mix is added the very specific culinary influences that stem from the Jewish faith and its followers’ closely-guarded identity.

These include a kosher diet as outlined in the Hebrew Bible, and special meals on the sabbath and religious holidays.

Not only are these influences homegrown, but they also come from the worldwide diaspora, introducing new flavours into an ancient cooking tradition.

Join us as we check out the tastiest of traditional Israeli foods. 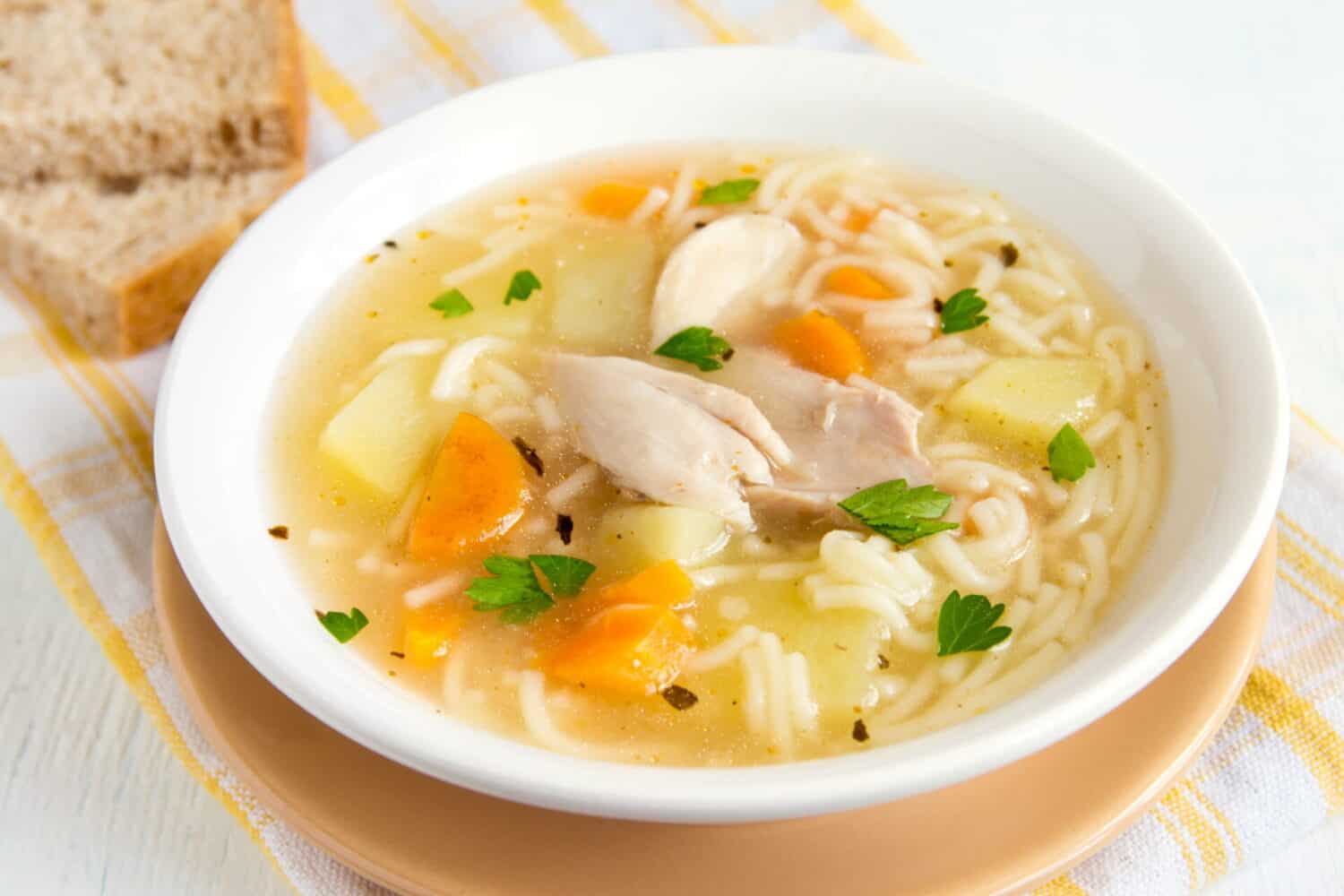 Chicken soup has been served in Israeli kitchens for hundreds of years. Its ability to restore people’s mood and return them to good health has it nicknamed ‘Jewish penicillin.’

On the face of it, traditional Israeli chicken soup is a simple one. A chicken broth is made, to which sliced vegetables including onion, carrot, and celery are added until cooked.

The soup gets much of its flavour from these additional ingredients, as well as from herbs such as either dill or parsley.

Various versions of chicken soup exist, with some including rice, orzo, or noodles. For religious holidays, dumplings are often added.

These include kneidlach made from matzah unleavened bread, and gondi made from chickpeas.

You’ll find it served on small plates or side dishes as an accompaniment to most Israeli meals.

Israeli salad is usually finished with a squeeze of lemon juice or drizzle of olive oil, and provides a freshness to meals that often include deep-fried or slowly stewed elements.

Israeli salad is eaten throughout the day. At breakfast it can be served with yoghurt and za’atar spices, while tahini and sumac are more common the rest of the day.

Another form of traditional dumpling, kubba is the name given to a family of dumplings that are prepared in a similar way while their exact ingredients may differ.

Common versions have the kubba made by combining bulgur wheat with minced lamb and crushed pine nuts to form a ball. Other recipes use semolina instead of bulgur wheat.

Believe it or not, the spongy jam (or jelly) sugared doughnut has its origins as a celebratory holiday food known as sufganiyot in Israel.

It is most commonly associated with Hanukkah, the Jewish festival of lights, when there is a tradition of eating foods cooked or fried in oil.

Traditionally, sufganiyot were prepared by making a sandwich out of two separate pieces of dough with jam between them that was then deep-fried. It’s now more usual for the dough to be deep-fried first and then filled with jam.

The most authentic sufganiyot stick to using strawberry jam, however you will also find versions filled with custard, and dulce de leche.

Ptitim was developed in the 1950s when the modern state of Israel took shape and other forms of carbohydrate starch such as rice were hard to come by.

It is a form of pasta, often formed into rough balls. It also goes by the name of Ben-Gurion rice, after the then Prime Minister, and giant couscous because of its similarity in look to the North African staple.

Made using wheat flour, ptitim is first shaped and then toasted in an oven, giving it a nutty flavour.

When being added to a dish, the ptitim are fried or baked, often with onion and tomato paste, although it can be readily used as an alternative to rice or pasta in any dish that would normally use them.

Kugel is an interesting blend of sweet and savoury flavours that together forms a baked dish that sits closest to a European pudding.

The most common version is made from either egg noodles or potato, alongside sweet cottage cheese and milk, to create a semi-solid consistency a little like custard.

You’ll often find raisins and cinnamon or other sweet spices sprinkled over the top too before the kugel is baked in the oven.

A specific variant known as Jerusalem kugel is topped with caramelised sugar and black pepper. It’s popular as part of a sabbath day meal, in which case it can be cooked slowly over the previous night since cooking on the sabbath itself is forbidden by religious law.

The Iberian-sounding name of this egg dish gives a hint to its origins with the ancient Jewish communities of Portugal and Spain.

This slow method of oven baking turns the eggs brown. The shell is then removed, and they are served as part of a larger meal, or as one of the components of a sabich sandwich (described more fully later).

Because of their cooking style, haminados are a regular feature of sabbath day meals.

If Israel was to have a national dish, it would probably be falafel. They are made from deep-frying softened (but not cooked) ground up chickpeas with spices and a little olive oil that helps combine the blend into balls.

Found on every street corner, falafel are commonly found in pita bread with salad and tahini (sesame seed paste) or mayonnaise, or as part of meze mixed platters.

The spices used differ from person to person, but onion, garlic, and cumin are all popular. For a healthier version, look out for oven-baked falafel, whose taste and texture are almost identical to their deep-fried siblings.

Bourekas are a type of filled savoury pastry that also probably made its way into the Israeli cooking tradition via the Sephardic Jews of Spain and Portugal.

The pastry itself has a buttery, flaky texture similar to puff pastry, which is now used interchangeably.

The most popular fillings are cheese, spinach, mushroom, and tomato and cheese (or ‘pizza’). They can also contain minced lamb or beef, but this is less common.

Before being baked in an oven, the raw dough and filling mixture is given an egg wash to create a rich golden-brown colouring, and topped with either sesame, poppy, or nigella seeds.

You’ll most likely enjoy bourekas with hard-boiled eggs or haminados, a dipping sauce such as tahini or zhug hot sauce, and a little salad or grated tomato.

Whether you call it by its Hebrew name of hamin or by the Yiddish term cholent, this dish is a traditional Jewish stew.

It is most often eaten on the sabbath after being kept warm on a hotplate or in an oven on the lowest heat overnight.

Unlike many Israeli dishes, meat is one of the most important ingredients in hamin. Chunks of beef are normally used, but chicken can also be found in hamin instead.

The meat is joined in the cooking pot by potatoes, beans such as kidney beans, and grains of pearl barley.

The slow cooking allows these ingredients to release all their flavour into the stewing broth to create the typical taste of hamin.

It is from hamin that hamindos eggs get their name, since the eggs are often placed on top of the hamin stew to cook and take on their brown colouring. The eggs can be served with, or separately from, hamin.

Sabich sounds a little like what it actually is, a sandwich. Originally created by the Jewish population of nearby Iraq, sabich is now widely eaten in Israel too.

You’ll find it mostly enjoyed in the morning as a breakfast dish, and often served with the other ingredients tucked into a pita or laffa flatbread.

A sabich will usually contain fried pieces of aubergine (eggplant), Israeli salad, and haminados eggs. This mix is finished with a drizzle of tahini blended with lemon juice, and amba. The latter is a mango pickle.

You might also be asked if you would like zhug hot sauce or chopped onions sprinkled on top.

Widely eaten throughout the Middle East, with Israel no exception, ful medames is a dish of stewed fava beans.

The beans are stewed with garlic, onion, lemon juice and spices to impart flavour, and are usually served with a good amount of olive oil and paired with some raw onion and hard-boiled eggs.

Often simply called ful (beans), this dish can be eaten at any time of day, including as a breakfast with bread.

Coming from the Yiddish for ‘stuffed fish’, gefilte fish is a fish mousse or pâté made from poaching the pureed flesh of fish including carp and pike.

Once stuffed into a fish skin, it’s now mostly found formed into balls or patties.

Once stripped from the bone, the fish fillets are blitzed to a puree with eggs, matzah bread crumbs, seasoning, carrot, and potato.

The resulting paste is formed into a log and then boiled in fish stock made from the remains of the fish.

This log is cut into slices before being served, and is eaten either chilled or at ambient temperature. Each slice will usually be finished with a little sliced carrot, and chrain, a horseradish sauce.

Brought to Israel by the Jews of Poland, rugelach is a sweet rather than a savoury pastry with an appearance similar to a croissant. It’s even possible the croissant stems from the rugelach.

In its most traditional form, the pastry for rugelach is made with a dough that incorporates sour cream, while doughs made with cream cheese are slightly more recent.

Unlike a standard croissant, rugelach is a filled pastry. Fillings include chocolate, raisins, walnuts, and fruit jams. Rugelach are generally enjoyed with coffee in cafes, or at home after being bought directly from bakeries.

Another dish prepared as a celebration of Hanukkah, latke are traditional Jewish potato pancakes.

They are made from either grated potato or mashed potato that is then shallow-fried until a dark caramel colour.

The grated potato version of latke is the most traditional. Grated onion is usually also added before eggs and either matzah meal or flour are added.

The process for preparing mashed potato latke is identical, except that the mix of ingredients are put into a food processor before being put into the hot oil of the pan. They have a denser consistency than the grated version, which is similar to a rosti.

Lekach is a sweet cake flavoured with honey that is traditionally prepared for Rosh Hashanah, the Jewish New Year.

Various versions exist, ranging from lighter to heavier sponges. Most commonly, lekach is a dense cake like a heavier gingerbread, made dense through the large number of eggs added.

Coffee and tea are used instead of water to provide colour to the finished cake, and also add to its overall aroma.

When it comes to taste, in addition to dark honey and hints of coffee or tea, lekach can also include cloves, all spice, cinnamon and nuts including walnuts or almonds.