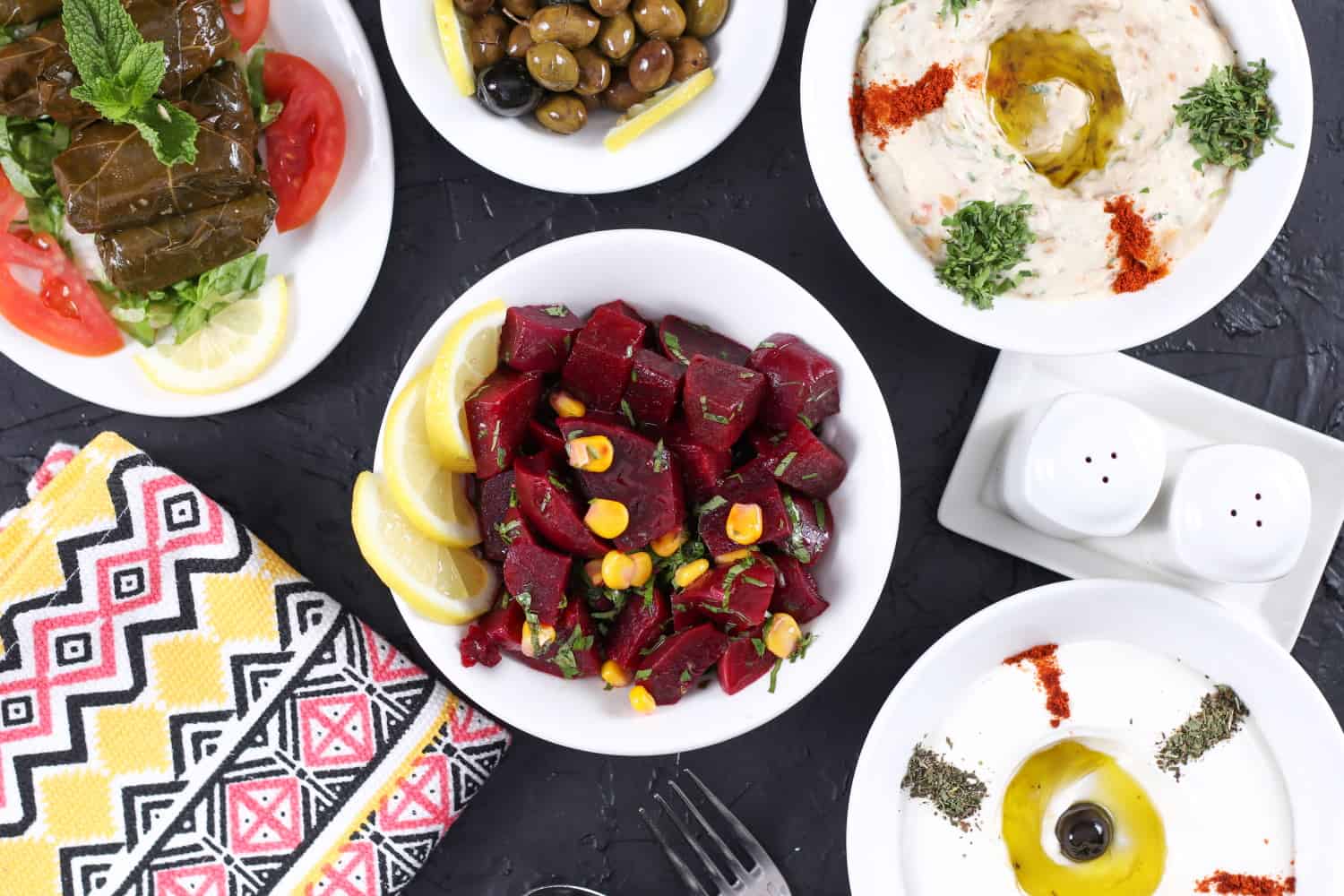 Nestled in the north-eastern corner of the Arabian Peninsula, the modern nation state of Iraq was one of the cradles of civilisation, leading to the world’s first cities.

Also boasting the first known recipe ‘books’ (in fact clay tablets), it is a country with a long culinary history.

Iraqi cuisine, sometimes known as Mesopotamian cuisine after the area’s ancient state, is highly diverse. In addition to Mesopotamian dishes, some of which are still cooked, it takes influences from the surrounding region, including Iran and countries once part of the Ottoman Empire.

It is able to take advantage of two climatic zones, which means wheat and apples can be grown alongside rice, citrus fruits and dates. With Mesopotamia meaning ‘the land between rivers’, it’s no surprise that fish is also a popular traditional ingredient in many dishes.

But whatever your dietary tastes, you’re sure to find something to tickle your tastebuds with these traditional dishes of Iraq. 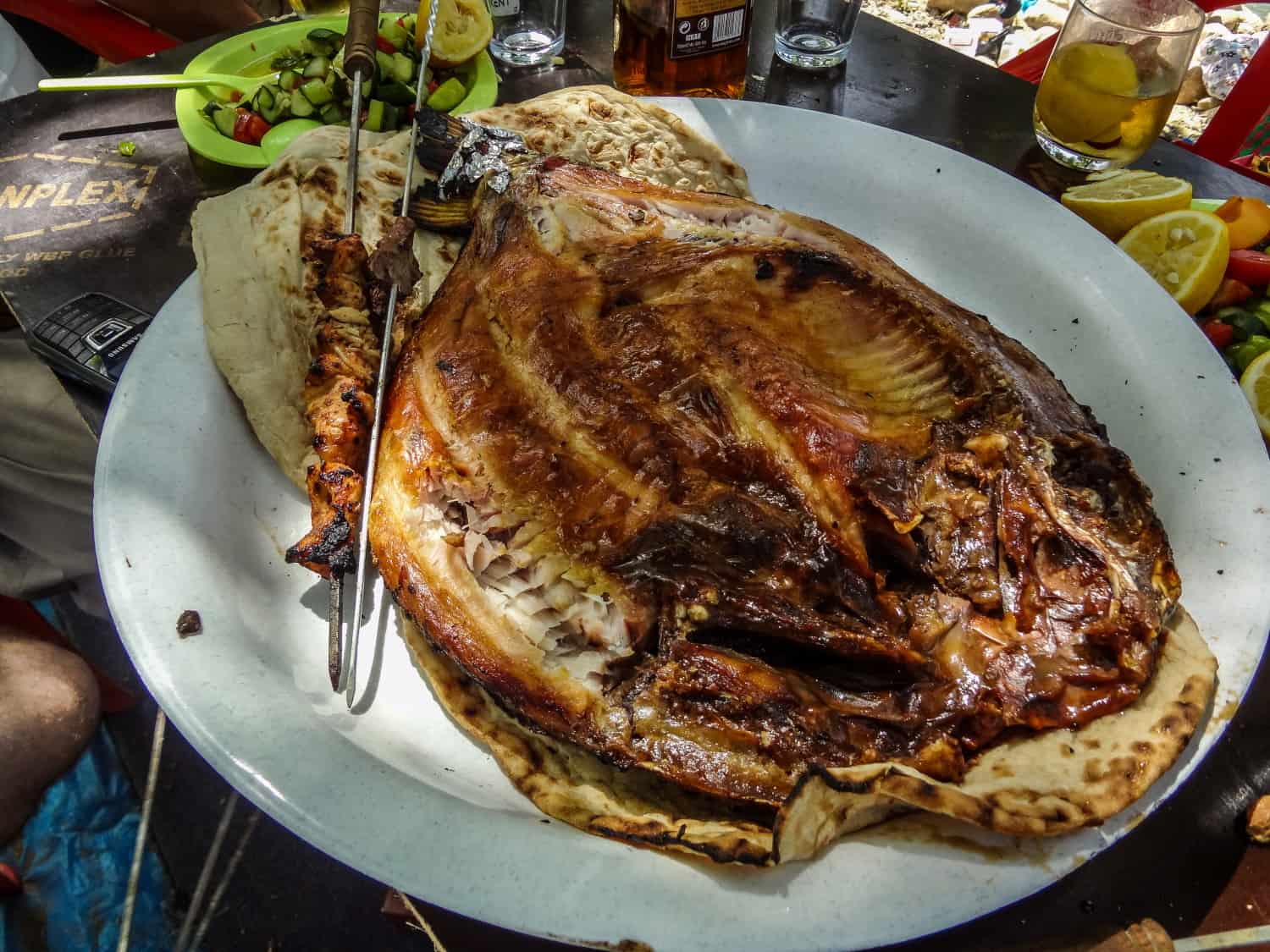 Masgouf dates right back to Mesopotamian times, perhaps 5,000 years ago. Often considered to be Iraq’s national dish as a result, it consists of whole grilled carp, traditionally fished from the Tigris and Euphrates rivers.

Common in the restaurants of the capital, Baghdad, and in particular the Abu Nawas district, it has spread right across the country.

The preparation of the dish begins by butterflying the fish so that its two fillets remain attached to the backbone. It is then placed in a special fish grill, or skewered on large spikes before being marinated with a mix of olive oil, salt, tamarind and turmeric.

It is cooked on a special open fire known as an altar, which burns with the wood of the country’s apricot trees.

Unlike most fish dishes, masgouf isn’t a quick dish to prepare, with each fish taken at least an hour to cook.

It is served whole on a large dish or tray, with lime, onion, and pickles. In Baghdad, it is covered in a warm flatbread.

Also spelt qoozi and ghoozi, the word quzi can be traced back to the Turkish for lamb (kuzu). Slow-cooked lamb, roasted nuts such as almonds, and raisins are served with rice.

Its most authentic versions consist of an entire lamb, which is stuffed with the remaining ingredients and range of local spices. These include cardamon, cinnamon, and baharat, a mix that can include a dozen different individual spices from black pepper to nutmeg.

However, it’s much more usual today to find quzi served as pieces of lamb meat served beside the dish’s other ingredients, creating a meal similar to a biryani or pilaf rice of the Indian subcontinent.

When it comes to snack foods, Iraqi cuisine may not have the range available in a European or North American bakery, but it does have kleicha.

In their most usual form, kleicha are biscuits (cookies) that take the form of a slice of Swiss roll. Rather than cream, the dark spiral line of the filling is made from a date paste giving them a flavour that will remind many of fig rolls.

Alternative versions see kleicha taking the form of half moons that are filled with finely chopped nuts and either sugar or desiccated coconut.

Glazed with an egg wash for a golden-brown colour, the biscuit dough isn’t left plain, but flavoured with cardamom or rose water (the main flavour behind Turkish delight).

You might have already noticed a tendency to include sweet ingredients in savoury dishes in traditional Iraqi cuisine.

Shorbat rumman is no different, although there is much debate over whether it originated in Iraq itself or in next door Iran.

In English, shorbat rumman is usually known as pomegranate soup. Made using both the juice and the fleshy ruby seeds of the pomegranate fruit, the soup is thickened with yellow split peas, and flavoured with mint.

This perfectly compliments the sharpness of the pomegranate. Pieces of beetroot add earthiness (and further colour), while spinach can be added towards the end of the cooking process until wilted down.

Tabbouleh is a popular mezza, or meze, starter to almost any meal in Iraq. Light on the stomach as any appetizer should be, but full of flavour, tabbouleh is eaten as far afield as Egypt and Turkey, demonstrating just how tasty the dish must be!

A salad, the ingredients essential to the traditional flavour of tabbouleh are tomatoes, mint, red onion, soaked but uncooked bulgur wheat, and lemon juice. Many recipes also call for cucumber or lettuce.

These ingredients are finely chopped and mixed together. It is usually served alongside other mezza dishes now known throughout the world, such as hummus, pita bread, and baba ghanoush (aubergine dip).

Margat bamia couldn’t be more different to tabbouleh, being a rich stew prepared with lamb, okra (also known as lady’s fingers), and tomatoes.

Unlike many of Iraq’s traditional dishes, margat bamia is not heavily spiced, but instead the natural flavours of the lamb and okra are allowed to meld together and infuse the cooking sauce or gravy.

That said, the lamb is still cooked with chopped onion and garlic, as well as seasoning of salt and pepper, before being simmered in water until cooked most of the way through.

The okra is then added and allowed to cook down, which helps to naturally thicken the rich meat-flavoured sauce that develops.

Like margat bamia, maqluba is generally made with lamb, as are most traditional Iraqi recipes. Its name more or less translates as ‘upside-down’, which is how the dish is served.

Dating back at least 800 years, this dish combines the lamb already mentioned with rice and a variety of fried vegetables, most commonly aubergine and potato, but also cauliflower too.

Placed within the cooking pot in layers, the gentle heating process leaves the layers intact. When prepared correctly, maqluba can be turned out of the pot as one, like a cake, revealing the different layers.

It is usually topped with nuts and fresh parsley.

Kanefah, or kadaif, is another dish that has what might seem to some like an unusual mix of ingredients, but is certainly worth trying if you discover it listed on the menu of a restaurant in the country or elsewhere around the world.

Deliciously sweet (or sickly sweet depending on your own personal tastes) kanefah is most commonly served as a dessert.

Pieces of shredded and pre-baked filo pastry form the base of this dish, which is heavily soaked with a sugar-syrup until moist.

It is then topped with a layer of grated cheese, which is followed by chopped pistachio or other nuts.

Sfiha can be thought of as half pizza and half open pie. The pizza-like base is made from a flatbread that will roughly fit into an adult’s hand, although it is much thicker than an Italian pizza dough.

This is topped with minced (ground) mutton by tradition, although lamb is frequently now used because it is readily available, more tender, and less rich in flavour.

The mince is enhanced with tomatoes, pine nuts, and local spices, with exact recipes shifting subtly even between neighbouring establishments.

While mujaddara has lots of slightly different spellings, its ingredients remain pretty standard right across Iraq’s 18 provinces, despite the earliest existing recipe dating to 1226 AD.

One of the country’s primary vegetarian dishes, it was therefore associated with poverty, although it is now enjoyed by all classes.

When it comes to ingredients, mujaddara consists of a mix of rice, lentils, and whole grains of wheat or similar cereal grains. They are simmered in water flavoured with cumin, mint, and coriander.

This mix is topped with a liberal sprinkling of fried onions, providing a much needed additional flavour, while the relatively dry mix is moistened by the addition of yogurt.

It is a dish that consists of white or lima beans simmered until soft with tomatoes, celery, carrots, onion and bay leaf, to create a thin but tasty soup and broth.

The richness of its liquid is often enhanced by adding olive oil either in preparation or when consuming it, while meat can also be added.

Unusually for a soup, fasoulia is also regularly served with white rice as a secondary plate, and salads such as tabbouleh.

Ka’ak is another Iraqi sweet treat. They take the form of a hard biscuit, shaped into a ring.

They tend to be made using the flour of the sesame seed, combined with egg yolks, water and a little sugar, making them a simple biscuit to cook.

While still warm they are generally sprinkled with whole sesame seeds.

As well as this most basic version, others include a filling made with raisins or apples. They tend to be sprinkled with flaked almonds instead of sesame seeds.