Easy to make, from seeds or nuts with or without flour binders, and even easier to buy, vegan cheese is a great alternative to traditional cheeses.

But just because it is made from nuts, soy and other plant-based ingredients, doesn’t mean it can’t ‘go off’,

This article will cover all the different signs to look out for to see if your vegan cheese has gone bad and some storage tips to keep it fresh for longer. 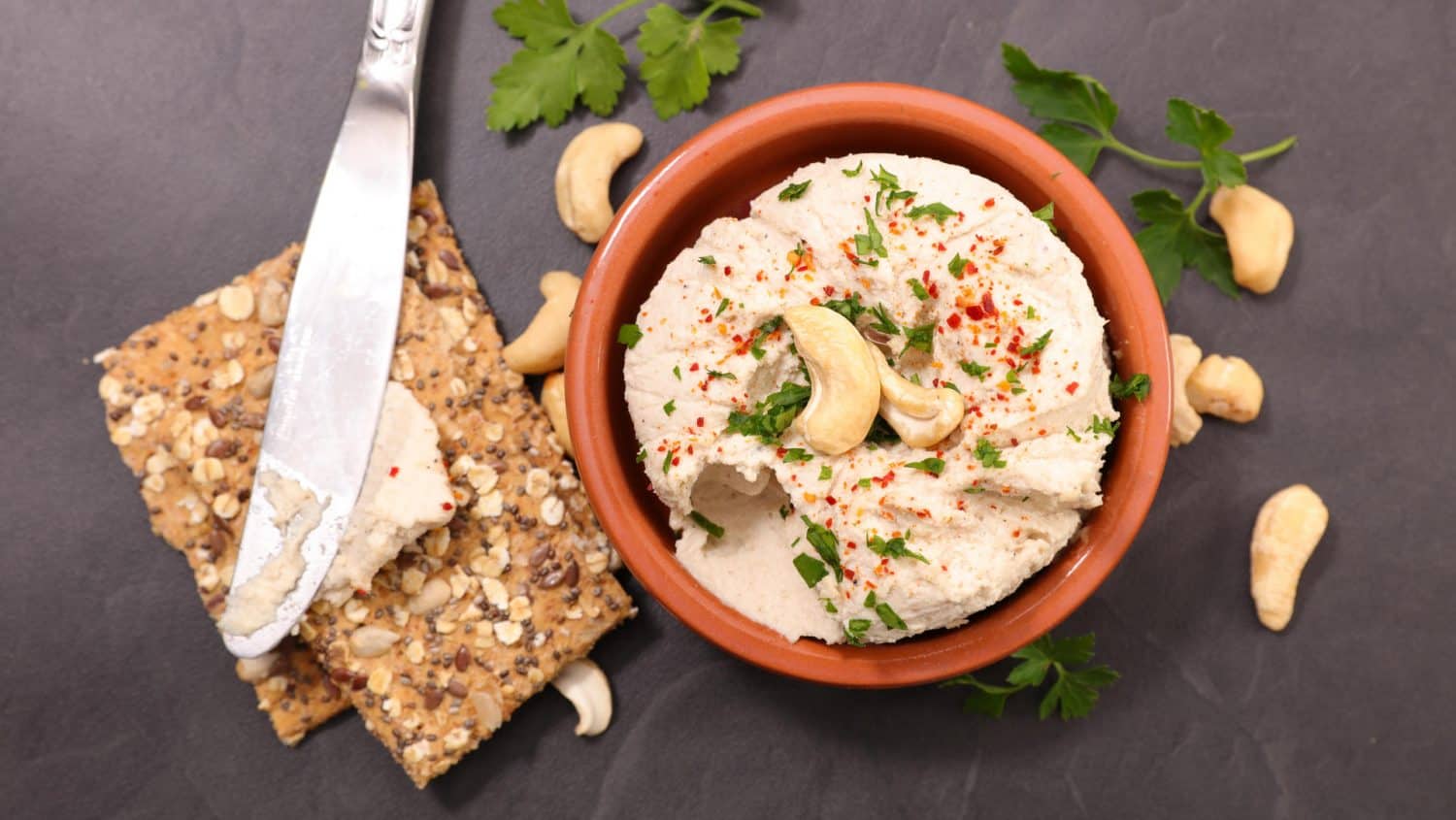 How to Tell if Vegan Cheese is Bad

Depending on the type of vegan cheese (hard, soft, spreadable etc), it should closely resemble the dairy version; no signs of abnormal growths, discolouration from contact with air, moisture or other foreign bodies.

As far as visuals go, if you can see anything other than ‘cheese’, then proceed with caution. This needs closer inspection with vegan blue cheeses, as the cheese uses a specific mould to generate its flavour.

However, if your vegan cheese has a rancid or sour smell or musty aroma, you may find that it’s a goner. Vegan cheese can produce an undeniably pungent aroma, despite being dairy-free. So, unless your cheese smells appetising, don’t eat it.

Depending on the type of vegan cheese you’ve bought or made, you’ll need to pay close attention to its original form to identify if this changes.

But excessive liquid indicates that it has spoiled and should not be eaten.

Everyone’s favourite part of cheese; the different flavour characteristics that each cheese has is a true joy. However, your vegan cheese can take on flavours that tell you that your cheese is long past its prime.

Putting aside the individual flavours each cheese has, any cheese that has a sour taste, or that could be described as ‘rancid’ or ‘not quite right’ should be viewed with caution.

When in doubt, don’t consume, and ditch the rest of that cheese.

There’s a huge difference between the mould that grows on vegan cheese, and the cultured mould that’s used professionally to create delectably flavoured cheese.

Take a close look; is the mould you can see marbled through the cheese, like a block of blue cheese, or is there something weird growing on the surface?

Most bad moulds will have an identifiable appearance; grey-green, slightly fluffy with little hairs sticking up, small grey spots, a flat spreading white skin, or they can be an orange colour and belly down into the cheese’s surface.

As a general rule of thumb, unless the cheese has a cultured mould, for flavour development, any cheese that’s spawning a mould should be discarded without further thought.

Consuming spoiled or mouldy foods can cause serious health problems, including food poisoning and hospitalisation.

How Long Does Vegan Cheese Last

As with most manufactured goods, you should always defer to the directions on the packaging. There, you’ll find the all-important Best Before or Use Before date, and storage instructions.

However, if you’re making your own vegan cheeses, you should first check the directions on the recipe. If this information is missing, this guide is a general view of the shelf life of your vegan cheese.

How Long Does Vegan Cheese Last in the Fridge

Keeping your vegan cheese in the fridge is going to be the most obvious, and convenient choice, but do keep an eye on your calendar too. Most commercial vegan cheeses can last for a few weeks to a month, but your homemade cheese may not.

If you’re making your own vegan cheese, it’s worth taking the extra time to source the freshest possible ingredients. This freshness will lengthen the shelf life of your cheese to a couple of weeks for firm or semi-firm cheeses, and potentially a month for hard cheese.

It’s worth noting, soft cheeses, like Ricotta or cream cheese, should be consumed within 3 days, regardless of whether it’s a commercial or homemade product. Beyond this point, you run the risk of it going bad.

How Long Does Vegan Cheese Last in the Freezer

As with dairy-based cheeses, you can keep your vegan cheese in the freezer. This is a great option if you batch make cheese, or buy in bulk. However, there will be a change in the texture due to the -0˚/32˚F temperatures.

Vegan cheese will store safely for 1-3months in your freezer without risk of deterioration. Beyond this, you can expect the structure of the cheese to alter, and once thawed, this can lead to spoilage.

How Long Does Vegan Cheese Last on the Countertop

Just like dairy-based cheeses, keeping your vegan cheese on the countertop isn’t a great idea. Left out at an ambient temperature, you can expect your cheese to start to go funky within 24hours.

It’s not really wise to eat it after 3-4 hours (temperature dependent), as bacteria will start to form and spoil the cheese.

How To Store Vegan Cheese

How long your vegan cheese lasts has a lot to do with how you’ve stored it, and improper storage will rapidly decrease its lifespan.

How to Store Vegan Cheese in the Fridge

As with most foods that are prone to spawning mould growths, this can be inhibited by using airtight containers or wraps. Vegan cheese is no different, as it’s high in protein, which is an ideal mould-growing medium.

To keep your cheese fresh for longer, be sure to carefully wrap it up in either cling-film, or beeswax wraps, and exclude as much air as possible.

You should also store different cheeses separately. Keeping them in the same airtight container is fine, as long as each cheese is wrapped individually; this should help prevent cross-contamination and accidental spoilage of various cheeses.

How to Store Vegan Cheese in the Freezer

It’s highly recommended to wrap your vegan cheese in protective layers of plastic wrap, beeswax paper, or greaseproof paper to create a barrier between the cheese and the sub-zero temperatures in your freezer.

This barrier won’t prevent the cheese from freezing but will stop freezer burn from damaging the cheese, which can then cause spoilage. To get the maximum amount of time in your freezer, be sure to wrap the cheese 2-3 times with a protective product.

Place the cheese deep in the freezer where it will be safe from fluctuating temperatures when the freezer’s opened.

How to Store Vegan Cheese on the Countertop

Whilst storing your vegan cheese on the countertop for any length of time is a bad idea, it is sometimes necessary before cooking. In this case, it’s best to leave it in its protective wrappings, or in an airtight container.

The idea is to restrict or prevent as much airborne contamination or contact as possible, and thus prevent bacteria from breeding on the cheese.

So, keep your vegan cheese in the fridge until you absolutely need to get it out, and then keep it in its wrapper or container until you’re ready to use it.

Vegan cheeses come in a wide range of flavours, textures, and densities, but they can all go bad through improper storage, or simply keeping them too long.

To get the maximum life out of your cheese, keep it in an airtight container in your fridge, or freezer if you need it for longer, and only take it out when you’re ready to use or eat it.

When all else fails, give your cheese a once over before eating it; does it still look and smell like cheese? If it has a weird smell, feels slimy or is leaking liquids, or has any sort of discolouration or furry growth, throw it out and enjoy something else.