Made from the light and dark turkey meat, and pressed into the familiar bacon shape, this pork alternative is a great option for those who don’t eat pork products.

But, how long does it last, what are the best ways to keep it, and how do you tell if your turkey bacon has gone bad? 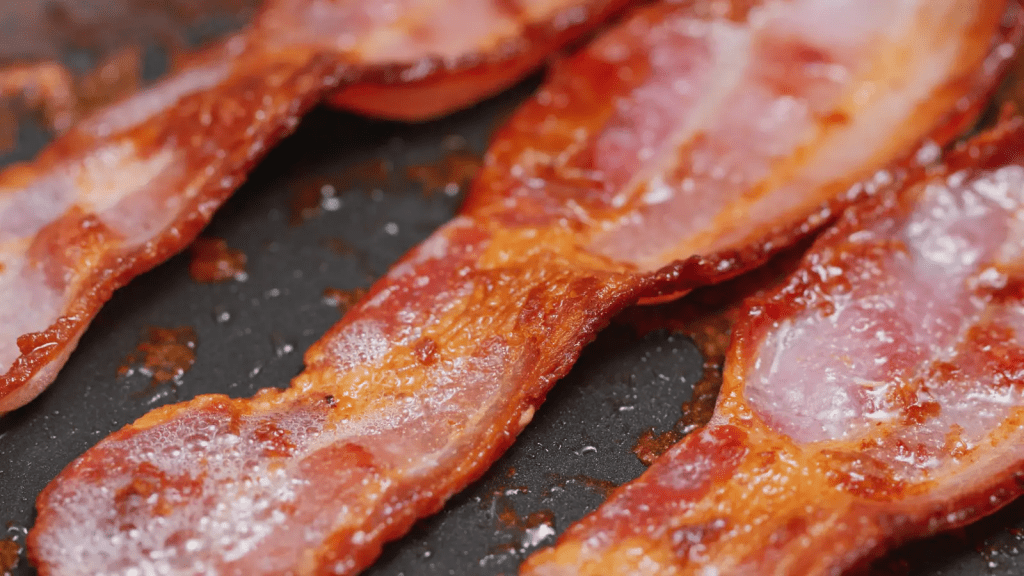 How to Tell if Turkey Bacon is Bad

Pressed into those tantalising and familiar bacon rasher shapes, turkey bacon is often favoured by non-pork eaters and those seeking lower-fat options.

But, whilst some smaller butchers may produce their own turkey bacon, you’ll most likely buy it from your supermarket, and it’s worth knowing what you should look for:

Using a blend of light and dark meat from turkey, this processed meat is diced, pressed, and sliced into the shape of bacon rashers before being packaged up for your convenience.

Most manufacturers will package the meat into a fan of rashers, and this is helpful for you to inspect the pack. It’s worth taking a few seconds to check the pack thoroughly; look for discolouration, your bacon should be light and dark shades of pinky-red, with no signs of brown, blue, green or grey. If you see anything other than pink/red, bin it straight away!

Inspect the package, is it nice and flat, or does it balloon a bit? This can be an indicator that the turkey within has begun to go bad, and has released gases into the packaging.

Also, look in the corners of the packet; you don’t want to see any liquids, where possible, always try to get packets with the longest Use By or Best Before dates stamped on them, as this will give you the maximum shelf life.

The following tips are obviously something you can only do once you’ve taken the packet home.

Given most packets of turkey bacon will be vacuum-sealed, it’s hard to detect any nose curling aromas. But when you break that seal, you shouldn’t be greeted by any bad smells either.

If you detect any aromas that smell sour or rancid, you’d best avoid cooking and eating that turkey bacon! What you should smell is… raw meat and nothing but raw meat!

By its nature, this is an odd product; it’s diced and pressed, then sliced, so there are going to be rises and dips where the diced meat isn’t entirely flat. It often feels tender and pliable, almost squishy to the touch, and has no more than a hint of moisture about it.

However, it definitely should never feel slimy or sticky! If your turkey bacon feels more like a wet and sticky mess, don’t take any chances and just bin it.

By this point, you should have noticed if there’s anything funky going on with your turkey bacon; the colour, smells, and texture should all have given you clear signs that it’s either safe to eat, or not.

But, in the event that someone else has cooked it, you might want to keep your wits about you. Turkey bacon should taste a little like a cross between turkey (leg and breast meat) and bacon (this is more of a mouth-feel thing).

It should taste meaty, vaguely turkey-like, and have a leaner meaty flavour.

However, if it tastes sour or rotten, it’s definitely bad, and should not be eaten. Try not to swallow or ingest bad turkey bacon, as this can lead to severe stomach upsets and potentially a trip to the hospital.

This is a definite NO! You should never see anything other than pinky-red meat, anything that’s spawning new life forms is a major no-no, and should be discarded immediately!

How Long Does Turkey Bacon Last

It might surprise you to know that turkey bacon doesn’t have a huge shelf life. Unlike cured bacon, this alternative is much more susceptible to spoilage due to two factors; being made from high protein poultry, and heavy processing (lots of little surfaces attract bacteria quickly).

Every commercially processed slab of turkey bacon should come with either a ‘Use By’ or ‘Best Before’ date, and it’s highly recommended not to buy without this advisory clearly printed on the packet.

But, these dates aren’t ironclad, so it’s always best to be vigilant and check your turkey bacon is safe to use first.

How Long Does Turkey Bacon Last in the Fridge

Fresh from the supermarket, your turkey bacon should keep for between 7-14 days, or according to the manufacturers’ guidelines.

However, once the packet is opened, and the air is able to contaminate the rashers, it’s advisable to consume the remaining pieces as soon as possible, or freeze them for later.

How Long Does Turkey Bacon Last in the Freezer

The good news is that turkey bacon freezes very well, and will last for between 3-5 months – so long as the rashers were frozen when fresh, and not after they’ve potentially spoiled.

How Long Does Turkey Bacon Last on the Countertop

This is the worst place you could leave your turkey bacon, left here it will spoil within 2 hours. Turkey bacon that has been left out on a countertop for an indeterminate amount of time should be discarded immediately.

How To Store Turkey Bacon

Packed full of protein, turkey bacon is the ideal medium for bacteria to grow. So, to avoid creating your own home-science experiment here are some handy tips on how best to store your rashers:

How To Store Turkey Baconin in the Fridge

Where possible, keep your turkey bacon rashers in their original unopened packaging and only open them when you’re ready to cook them.

If you don’t plan on using all the rashers at once, place the unused rashers in an airtight plastic bag or container, being sure to squeeze out as much air as possible. It’s worth writing the date on the outside of the container or bag, so you know exactly when you opened the store-bought package.

You can keep this re-packed turkey bacon in your fridge for a couple of days before using it. Or, you can freeze it for later, see below.

How To Store Turkey Baconin in the Freezer

Buying in bulk, whether as deli slices or packets, is always a great money-saver. Just package up your rashers into the portions you need, and you won’t have any waste.

To get the maximum shelf life out of your turkey bacon, parcel up the rashers into thick plastic freezer-proof bags, and then place all the bags in a much larger one before freezing.

This ‘double bag’ system helps to protect the tender surface of the turkey bacon from getting freezer-burn and spoiling. You can always place smaller commercial packets of turkey bacon into a larger thick plastic bag, as it doesn’t need to be portioned off.

How To Store Turkey Bacon on the Countertop

Whilst keeping turkey bacon on the countertop is a bad idea, it is okay to leave it here for a few minutes while you prepare other ingredients before cooking.

The main thing to remember is to not open the packaging until you’re absolutely ready to use it. Any contact with air in your kitchen could lead to a bacterial infection, and at room temperature, this infection will grow rapidly. So, keep the packet closed until you’re ready to cook!

Turkey bacon is a great high-protein pork alternative, and stored properly a packet can last all week or longer. But, if your perfect pinky-red turkey bacon is looking grey or green-purple, bin it!

Turkey bacon will keep in your fridge for a week or two, or in the freezer for several months, but should never be left out on your kitchen countertop.