Rhubarb is one of those plants that has an acquired taste; tart and a little sour, yet seductive in its own kind of way.

But, with its limited availability, it should be enjoyed in season. Would you know how to tell if your rhubarb is bad or good to eat? 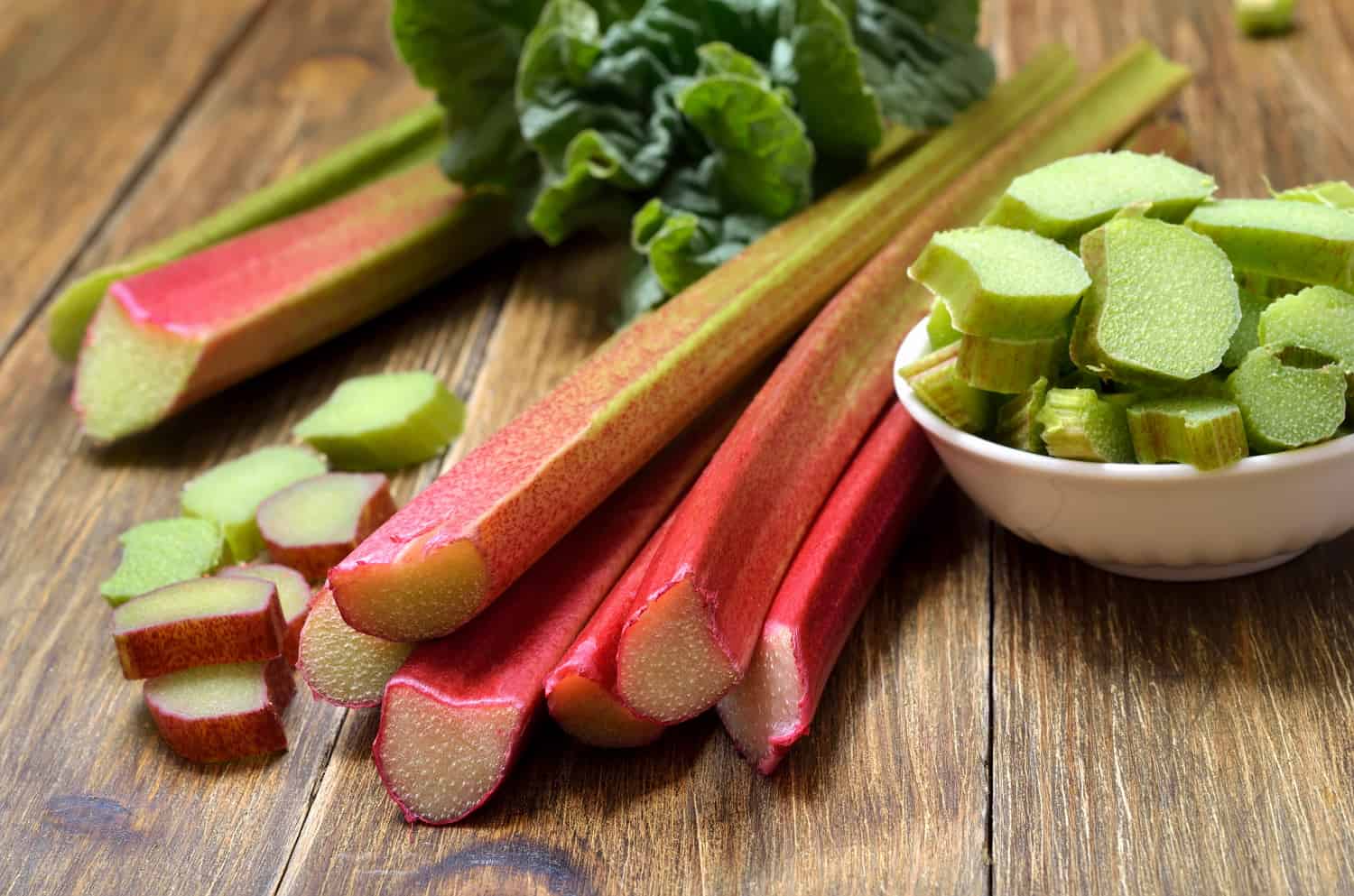 How to Tell if Rhubarb is Bad

When spring comes, rhubarb is never far behind, and with some varieties appearing on shelves right through into summer, it’s a wonderful treat as the weather warms up.

But, apart from not consuming the leaves of rhubarb (they’re dangerous to humans due to high amounts of oxalic acid and soluble oxalates), would you know if your rhubarb is safe to eat? This handy guide will help you navigate your assessment:

Fresh rhubarb stalks usually range from bright and glossy pink through to deeper shades of red, with the pinker colour closer to the leaf end. When cut into, the stalk will be a pale shade of green, or even white.

As rhubarb ages, the colours will darken slightly, and lose their sheen. The attached leaf (usually trimmed and left on for aesthetics) will also appear paler and less vibrant.

There’s no real comparison to the smell of rhubarb when it’s fresh; it’s zingy and has an earthy aroma. It smells like spring, bursting forth from a cold winter, full of renewed zest for life.

However, as rhubarb ages, this zest peters out into nothingness; it becomes non-descript, and then develops a hint of ‘off’ sourness. This aroma comes from the fibres within the stalk breaking down, and the enzymes changing within the plant.

Rhubarb stalks that are fresh, and in season, are long and well-shaped, with a stiffness that is hard to miss – they’ll poke their way through any shopping bag or packaging. The stalks should be rigid and uniform in size and weight and do not bend without breaking.

Conversely, when your rhubarb has seen better days or has in fact gone bad, it softens and becomes limp. Rhubarb that is no longer edible will not be able to keep upright and should be discarded.

When rhubarb is fresh, it has a sharp and acidic taste. Not dissimilar in its tanginess to a fresh grapefruit, the sharpness can be a little overwhelming to the uninitiated.

Rhubarb should not be eaten raw – contrary to the long-held belief; it’s not toxic, just very unpleasant – as the delicate flavour is obliterated by the tartness.

However, once cooked and usually with a little sugar to take the edge off, rhubarb is pleasantly zesty and a great accompaniment to rich or creamy desserts.

But, rhubarb that is too old has a musty, or dirty flavour on top of the sour or tartness you’d expect. The aroma that comes from the old rhubarb is not disguised

Fresh rhubarb should not have any mould growing on it, or on the leaves. There can be small spots of discolouration at the ends, down where it’s been taken from the main plant stock or near the leaf end, and these can be removed before eating.

If any mould is detected, the rhubarb may be too old, and other age-related signs will be evident; appearance, texture, smell etc. This rhubarb should be discarded.

How To Tell if Rhubarb is Bad When Cooked

Although technically a vegetable, rhubarb is most often served as a dessert. It’s mostly prepared as ‘stewed’ (cooked in sugared water until soft) and served with other fruit, like rhubarb and apple.

Where fresh raw rhubarb is scarlet on the outside, and usually lime-green when cut into, cooked rhubarb takes on a different hue.

When cooked, it will often lose much of its vibrant red colour, as this colour can be transferred to other ingredients or even the cooking liquid if stewed or braised.

However, rhubarb that is looking green-grey should be viewed with suspicion. Rhubarb goes this colour, and more of a brown-grey, as it turns and begins to rot.

If your cooked rhubarb looks like this, it’s going to be safer to bin it than to eat it.

Forget that earthy-zesty-punchy smell, cooked rhubarb that has gone bad will smell bad. It’ll still have a sour note, but as the enzymes within the rhubarb begin to break down the fibres within the stalks, the smell changes from pleasant to nose curling.

You can expect that fresh smell to have gone, and instead, it will be more like a sour rotting citrus/cabbage aroma. Even if you’re not sure, your nose will know!

Fresh, or freshly cooked, rhubarb has a certain stiffness or shape to it. Even when cooked, often the fibres from within the rhubarb will still be stringy and offer some structure.

However, rhubarb that’s gone too far down the path to the bin, well it’s nothing like that. Cooked rhubarb looks and feels slimy, the fibres are overly soft, and the mouth-feel will be unsettling. If you’re at all in doubt, discard the rhubarb immediately.

As you’d expect, cooked rhubarb should still have a certain tartness to it; slightly sour but not unpleasant, and often benefits from a little sugar.

Once the cooked rhubarb has gone bad, this changes dramatically. The flavour becomes undeniably sour, rotten, and can even feel ‘fizzy’ in the mouth if it makes it that far. Needless to say, do not swallow rhubarb that has gone bad.

If ingested, it will most likely cause an unsettling and unpleasant stomachache, and at worst cause you to seek medical advice.

Just as with fresh rhubarb, there should be no mould. What you will likely see though, is a separation of liquids. This happens as the rhubarb breaks down and the enzymes change within the plant.

A visual clue is the forming of a clear liquid floating on top of the cooked rhubarb, and can even have a secondary white growth on the edges of this liquid. Rhubarb with this appearance should be discarded immediately.

How Long Does Rhubarb Last

Often bought in largish bundles, a little bit of rhubarb goes a long way. So how long will your rhubarb last if you don’t use it all right away? Depending on where you keep it can influence the time hugely.

How Long Does Rhubarb Last in the Fridge

Brought home from the supermarket or greengrocer, rhubarb can be stored in your fridge for 5-7 days, and will retain most of its freshness. Beyond this time it’s best to prepare it for freezing, see below.

How Long Does Rhubarb Last in the Freezer

The good news is that rhubarb freezes really well, and will keep indefinitely at or below 0˚C/32˚F.

However, you can also freeze rhubarb as a pre-prepared dish; ie stewed on its own, with apples, or in a pie.

How Long Does Rhubarb Last on the Countertop

Definitely not the best option for longevity, but if you only need to keep your rhubarb for a couple of days, this will suffice.

Left on a countertop, or in the pantry, rhubarb will keep for between 2 and 4 days (depending on the room temperature).

It will start to dry out if you keep it here, but if you’re cooking with it within a day or so, this may not be a big problem.

How To Store Rhubarb

How To Store Rhubarb in the Fridge

Ideally, do not wash your rhubarb until you’re ready to prepare it. Instead, keep your rhubarb in a plastic bag, and place it in the crisper draw of your fridge. Kept here, it should last for the full 5-7 days.

However, you can also keep your rhubarb on a fridge shelf, again unwashed and in a plastic bag, but it may only last 4-5 days due to fluctuating temperatures when the door opens.

How To Store Rhubarb in the Freezer

To keep rhubarb in your freezer, there are a few very quick and easy steps; peel and trim away any leaf or root from each stalk, blanch the stalks in boiling water for a couple of minutes, and then chill in ice water, once drained pack the rhubarb into airtight containers or freezer bags.

How To Store Rhubarb in the Countertop

Keep your rhubarb out of direct sunlight, and preferably somewhere that’s cool and dark; a larder or pantry is better than on a kitchen counter.

Rhubarb kept here won’t last very long, but it’s perfectly safe for a couple of days if you intend on using it soon.

Rhubarb heralds in the seasons of spring and summer; vibrant and firm, opposed to older droopy and lacklustre rhubarb.

Its tart-zesty flavour is great for cutting through rich foods, and it keeps very well in both the fridge and freezer.

Keep away from rhubarb that’s smelly or mouldy, or tastes weird, and definitely don’t eat it!