No matter whether you’re cooking an Indian, African, Southern American, or a Mediterranean dish with it, okra has a distinct flavour and texture that elevates a dish.

But, if that okra’s not fresh, or if it’s gone bad, it can ruin a dish like nothing else. So, how do you know if your okra is bad? 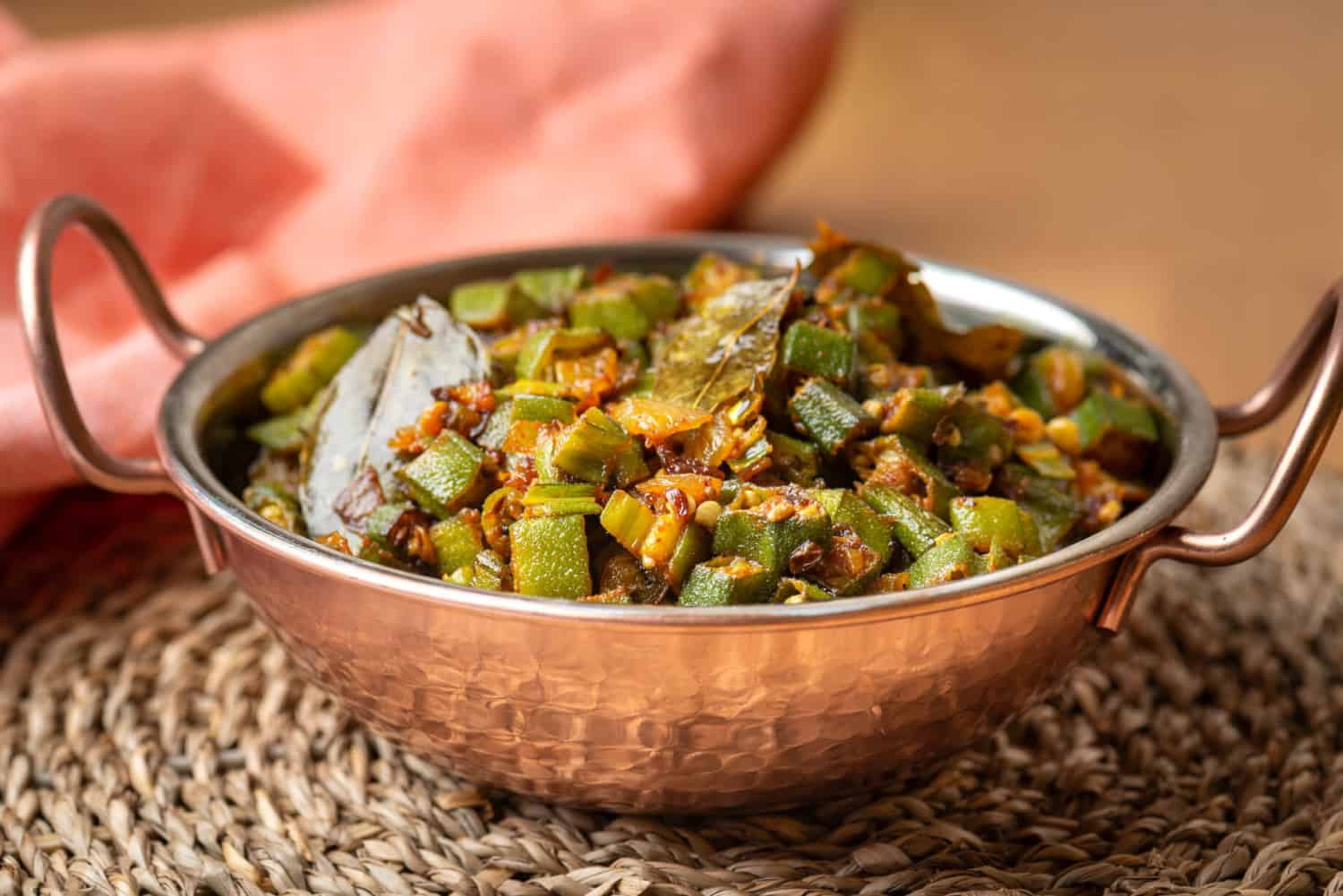 How to Tell if Okra is Bad

Okra can be bought in several ways; fresh, frozen, or canned is quite common. In supermarkets, at a greengrocer’s stall, or straight from the farmer or gardener’s field, okra is usually sold in loose bundles or bunches.

This article will assume you’re buying it fresh and unprepared in any way.

If buying pre-bagged, it’s worth having a snoop through and making sure the okra is fresh. You can use this guide as a way to judge if the okra is bad or if it’s good:

Okra pods should be bright and vibrant green, not super shiny, but more of a low-sheen.

Okra spoils quickly, and as it’s spoiling it changes colour. At first, the okra will be bright green, like grass, but as it ages or spoils it will get darker green or brown in colour, or have a motley colour.

Dark green or discoloured okra should not be bought or eaten, as it has already spoiled and may cause stomach illnesses.

Okra, as either a raw pod or cooked in chunks, has been likened to smelling very similar to several other vegetables, the most noticeable being asparagus and eggplant/aubergine.

However, spoiled okra will have a pungent ‘rotting’ smell that will be unavoidable. Some people have described the smell of spoiled and rotting okra as being akin to rotting meat.

Okra pods should be about 3-inches/10centimeters long, with the whole pod dry to the touch, but not dehydrated and shrivelled up.

If you detect any sliminess or stickiness, the okra pod has already spoiled and should be discarded straight away.

Once cooked, okra is known to feel ‘slimy’, due to its high-fibre base. However, it should not feel slimy before being cooked, nor should it feel sticky to the touch before it’s been prepared.

As a staple in many cuisines, and used as a thickening agent for dishes like gumbo, okra has a distinct flavour and mouthfeel. The flavour is somewhere as a cross between eggplant/aubergine and asparagus. It’s vaguely earthy, and a little bit nutty.

However, okra that has spoiled will taste like decaying vegetables; sour, bitter, and acrid. If your okra has any hint of bitterness, it quite possibly has gone bad and should be thrown out.

At no time should okra ever have mould either growing on it or a bloom of mould covering the fingers or pods. If any mould is detected, the okra should be discarded as it has already spoiled.

How to Tell if Okra is Bad when Cooked

Whether you’ve cooked your okra separately, or as part of a larger dish and decided to keep some for later, being able to tell if your okra is bad could save you from a horrible stomach.

Upon first glance, you’ll probably think your cooked okra looks fine. But, look closer and you may see a few signs to tell you otherwise.

The first sign is a light film or mucus spreading over the okra and surrounding ingredients; this is formed as the water-soluble fibres break down and begins to rot.

The other significant point is that the okra itself will easily tear apart; it will lose its structural integrity and fall apart with the lightest of touches.

Cooked okra that is safe to eat will smell something like asparagus-eggplant/aubergine and just a little bit like hibiscus. However, okra that has turned after cooking will smell pungent and is likely to leave you feeling nauseous if you smell it too deeply.

Once cooked, okra can be difficult to identify as spoiled. As many cooking processes will render the okra having a ‘sticky’ or ‘slimy’ texture. This cooked texture should not be confused with the texture of slimy or sticky uncooked okra.

Okra is high in soluble fibre, and as it ages, the okra generates a sort of slimy mucus on the outside of the okra pod. This mucus can range anywhere from sticky like chewing gum, or slimy like glue, and will wash off with water.

Cooked okra, however, has a sticky or slimy consistency, and only happens when okra that is in a good condition is cooked properly.

Okra that has already spoiled, and thus sticky or slimy, may break down further during cooking, and dissolve almost entirely, especially in liquid dishes like gumbo.

Where cooked good okra tastes like the cousin of an asparagus-eggplant/aubergine hybrid, cooked bad okra will taste more like rotting cabbage. The overall flavour will be similar to compost and will be impossible to ignore.

Cooked okra that has been stored for too long is likely to grow mould. Any growths, of slimy moulds or fluffy spore moulds, are unsafe to eat, and the cooked okra should be thrown out immediately.

How Long Does Okra Last

Having bought your okra, at a supermarket or greengrocers, or maybe you’ve grown it yourself, do you know how long the pods will last? It may surprise you to discover the vastly different times.

How Long Does Okra Last in the Fridge

Brought home after purchase, or straight from the garden, okra can be stored in the fridge below 4˚C/39˚F for 2-3 days. However, for it to last this long it should be kept dry and in a paper bag, or in a plastic bag with holes.

Do not wash it before storing it in the fridge, as this will encourage the breakdown of the okra’s fibrous structure, and it will be spoiled within hours. Okra has been known to last for up to 4 days in the fridge, but generally, this has only happened with freshly harvested okra from the garden.

How Long Does Okra Last in the Freezer

Freezing okra is an ideal way to get the maximum amount of time to enjoy it. But, unlike many other fruits and vegetables, okra requires some preparation before freezing. This will be covered in the next section.

Once frozen, okra will easily keep for 10-12 months, so long as it’s kept at -0˚C/-32˚F. Prepared okra should be kept in airtight containers or thick plastic bags until required.

When you need the okra, it should be thawed and used immediately, as thawed okra will go bad within 24-hours.

How Long Does Okra Last on the Countertop

It is a bad idea to keep okra on a countertop for any longer than absolutely necessary, i.e. whilst putting the groceries away.

Okra, left at an ambient room temperature of 20˚C/68˚F will begin to break down within a matter of hours and usually begin to show signs of this within 6-8-hours.

How to Store Okra

To get the most time possible out of storing your okra, it’s best to either enjoy it fresh or process it for freezing or canning.

Whilst okra can be kept in the fridge for 2-3 days, it’s best enjoyed on the day of purchase, just as frozen okra is best eaten as soon as it’s fully thawed.

How to Store Okra in the Fridge

When storing okra in the fridge, it’s best to only keep it for 2-3 days, and to keep it in either a paper bag or a plastic bag with a few holes for ventilation.

This is essential to prevent the okra from going slimy. If any signs of discolouration, or slim, is present, the above guide should be used to check if the okra has gone bad.

How to Store Okra in the Freezer

Before freezing your okra, there are a few simple steps to ensure it’s properly frozen.

The first step is to thoroughly rinse each of the pods and remove any attached stems. Once cleaned, the pods should be put into boiling water, and ‘cooked’ for 3-minutes before being plunged into ice-cold water.

Finally, drain away all the water, and either slice the okra or leave the pods whole before placing them into freezer bags or airtight containers.

Place the processed okra into the freezer, and be sure to mark the parcels with the date on them.

Remember: When frozen, okra should be used within 10-12 months of processing.

How to Store Okra on the Countertop

Okra should only be stored on the countertop just before cooking. Countertop storage is not really possible, as the ambient room temperature encourages the okra fibres to begin breaking down, which will hasten spoilage.

Okra can be enjoyed in several dishes from around the world, but you should only cook with okra that is in good condition.

Okra should be bright green, and never dark green or brown, or have black spots or mould. Okra that has gone bad will feel sticky or slimy to the touch and have created a thin mucus or membrane that coats the pod.

You can store okra for 2-3 days in the fridge, or processed for up to 12 months in the freezer.