When presented in all its glory, a whole cooked lobster is amazing. However, eating them can be awkward.

Instead, many people prefer lobster tails; all the best eating but without the faff; just cook and enjoy. But do you know how to tell if your lobster tail is good or bad? 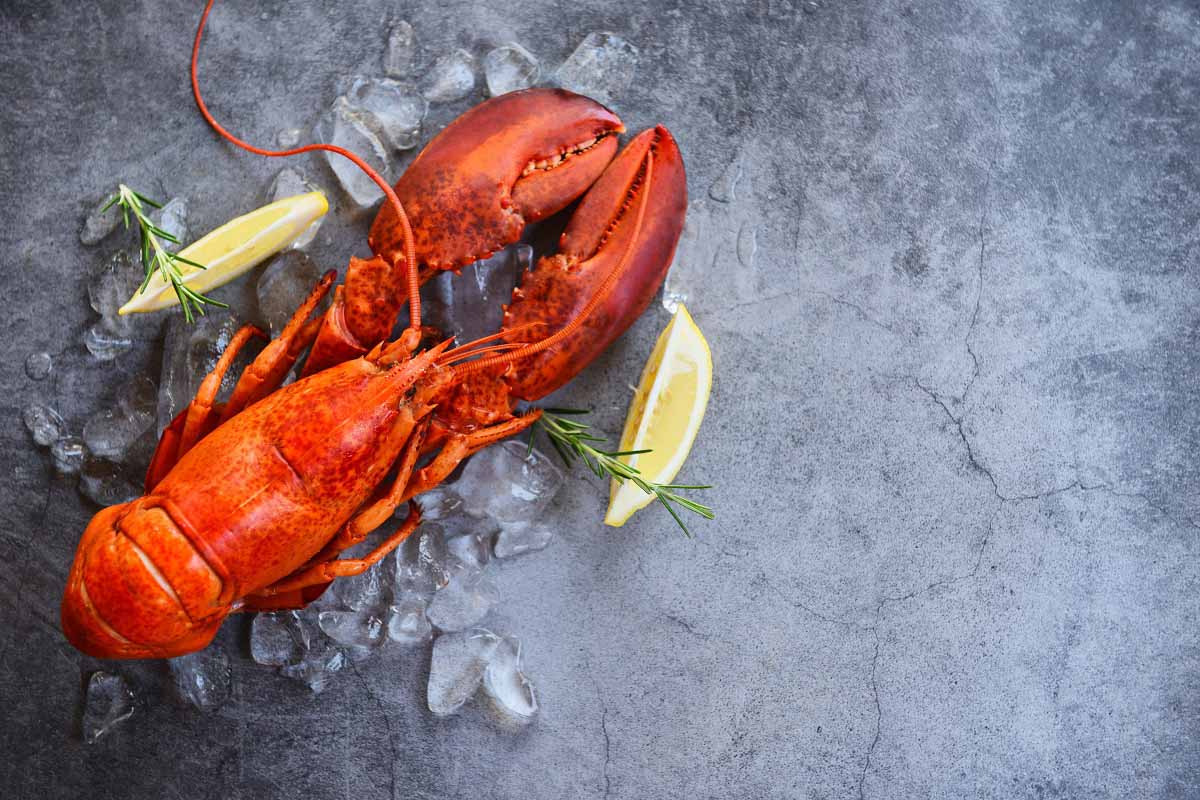 How to Tell if Lobster Tail is Bad

If you’ve ever been to a seafood restaurant, chances are you’ve seen your lobster dinner in a large tank. That’s because lobster is very high in protein, and this means they can spoil very quickly.

That’s why it’s advisable to purchase your lobsters live, or freshly boiled, and you shouldn’t delay in enjoying your meal. Equally, it’s vital to keep your lobster meat thoroughly chilled, as lobster will spoil quickly once it’s above 4˚C/39˚F.

If you’re in doubt, use this handy guide to assess if your raw lobster tail is bad:

Generally, you’ll buy lobster tails raw (but previously frozen) or still frozen. The outer shell of the tail should be a mottled blue-green, with the meat below a translucent white colour. Any deviations from this should be avoided, as this is an indicator of spoilage.

Because most lobster tails are sold ‘raw from frozen’, they cannot be re-frozen. Doing this is likely to cause a bacterial infection, and spoil the meat. It’s best to, once cooked, eat these lobster products as soon as possible.

Raw lobster, whether whole or as tails, should have a clean and vaguely seaside smell, not fishy. Any lobster products that smell ‘fishy’ are unsafe to eat and should be avoided.

A good rule of thumb is to carefully sniff the lobster, if you instantly pull back because the smell is pungent and revolting, that lobster tail has gone bad. If, however, the meat smells like seawater, then you’re good to go!

Raw lobster meat should feel firm, and a little dry – as it’s been out of the water. The shells tend to feel coarse, or rough, with smooth patches. If the shell feels slimy, or if the meaty flesh is soft and squishy, like cottage cheese, the lobster has gone bad.

It is unwise to eat raw lobster meat, as it contains various bacteria that can be harmful to humans. However, once cooked, these bacteria are killed, and it’s safe to consume lobster meat.

Mould on a raw or live lobster is rare, so if any growths are seen, the lobster has decayed and should be avoided.

How to Tell if Lobster Tail is Bad when Cooked

Once you’ve brought your raw or raw-from-frozen lobster tails home, and cooked them, you’re not quite out of the woods in knowing if they’re safe to eat.

If you’re in doubt, use this handy guide to assess if your cooked lobster tail is bad:

If you’re buying cooked meat, either whole or as prepared lobster tails, or cooking at home, the shell should be bright orange-red and the flesh should be a mix of paler white, with an abundance of scarlet red splashed across it.

If any of the meat looks pale green or verging into a lime-white in places, the meat has spoiled and should be thrown out and not eaten. Also, frozen lobster tails that have spoiled are likely to have ‘dry spots’ or discolouration on the shell or meat, so inspect them carefully.

Fresh lobsters, like other shellfish and fish, should not have any fishy aromas. Fresh lobster tails should smell only of saltwater, and if they’ve been cooked in flavoured stock water.

Generally speaking, if you recoil after sniffing the lobster, it’s probably been spoiled, and is no longer safe to eat.

Both cooked and uncooked lobster tails should feel coarse to the touch, with no hint of slime or wetness. Usually, tails or whole lobsters are kept on ice but are ‘dry’ as they’ve been out of water for some time.

The meat should be firm, dry, and hold its shape. Meat that is soft and squishy, or feels slimy like cottage cheese, has spoiled and should be discarded immediately.

In the event that you mistakenly consume spoiled lobster meat, chances are you’ll notice the sour taste pretty quickly. Some people who’ve done this have also commented on a ‘mustiness’, or flavour that was unpalatable.

The old adage of ‘if in doubt, throw it out’ is a wise one to adhere to when cooking and eating any form of lobster meat.

It is unusual to see mould on raw or cooked lobster, and is likely only in extremely rotten meat.

How Long Does Lobster Tail Last

Whilst it’s unlikely that you’ll have leftovers, as lobster is delicious, it is possible that you’ll need to keep your uncooked or cooked meat for a little while. There are advantages to keeping your lobster for a short time, but it’s best to look to appropriate storage – see the next section.

How Long Does Lobster Tail Last in the Fridge

Given the choice, you should only keep raw or ‘fresh-from-frozen’ lobster refrigerated for 1-2 days. Beyond this, the lobster is likely to begin to deteriorate rapidly, as a bacterium grows quickly in the high protein environment.

If possible, keep your lobster tails in their supermarket packaging, noting the ‘Use By’ or ‘Best Before’ date. Alternatively, vacuum seal them in heavy-duty plastic bags and keep them in the coldest part of your fridge. Lobster portions are susceptible to temperature changes and will spoil easily.

You should also use your fridge to thaw frozen lobster; preferably in an airtight container, with a raised platform so any water or juices can escape the thawing meat.

How Long Does Lobster Tail Last in the Freezer

If you’re intending on keeping your lobster or lobster tails for some time, then it’s wise to keep them frozen. You can purchase frozen lobster tails or whole, and then only have to safely transport them home in a coolbox.

However, if you’re freezing from live, it’s advisable first to ethically dispatch the lobster, and then freeze.

According to the USDA, once frozen, lobsters will keep indefinitely. But, it’s safer to thaw and consume your frozen lobsters within 6 months of purchasing/freezing.

To achieve a perfectly frozen lobster, prevent any direct contact between the freezer and the lobster. Failing to do this can cause freezer burn, and this will encourage spoilage.

How Long Does Lobster Tail Last on the Countertop

It is strongly advised not to leave your lobster or lobster tails out on your countertop, as the ambient temperature will quickly adversely affect the meat.

If you intend to eat your cooked lobster tails, it’s best to prepare them raw and cook them, and then keep them refrigerated until it’s time to eat.

If you’re cooking them and eating them hot, it’s best to do this quickly, not leaving them on your countertop any longer than absolutely necessary.

It is considered dangerous to leave any fish or shellfish out for more than 90 minutes, and definitely no longer than 2 hours without causing significant damage to the meat. Consuming spoiled lobster can cause severe illness.

How to Store Lobster Tail

Whether it’s at your fishmonger, or from your local supermarket, buying your lobster or lobster tails is just the beginning; you need to get them home and stored before they spoil.

When transporting the lobster, this is best done as quickly and as cold as possible; a cooler box or refrigerated cooler is ideal to avoid rising temperatures. Once you get your lobster home, it’s important to get it stored as soon as possible. Here are the best solutions to achieve maximum shelf life:

How to Store Lobster Tail in the Fridge

As with any meat or fish product, it’s best to keep lobster in either its supermarket packaging (being careful to note the ‘Use By’ or ‘Best Before’ date) or placing it into an airtight container. Place the airtight container in the coolest part of your fridge, away from the door and temperature fluctuations.

A suitable solution is to vacuum seal the frozen/raw-from-frozen lobster tails, or whole lobster, into a thick plastic bag, and remove as much air as possible.

It is unwise, and inhumane, to store a live lobster in your fridge in any form. You should first dispatch the lobster and then store the meat.

Remember: lobster will only keep for 1-2 days in the fridge.

How to Store Lobster Tail in the Freezer

To store the lobster in your freezer, you’re wise to first add a little bit of protection to the lobster tails, or whole lobster.

Note: at no time should you permanently freeze a live lobster.

It is advisable to wrap the supermarket packaging in a layer or two of paper, and then inside a larger freezer-safe bag. This should prevent any direct contact between the freezer and other frozen objects, and reduce the likelihood of freezer burn.

Freezer burn is an unwanted ‘cooking’ of the surface of the lobster meat and will trigger spoiling of the meat.

Remember: lobster should be consumed within 6 months of freezing.

Lobster tails are a great way to enjoy all the flavour and frills of lobster, without all the hassle.

But, lobster tails should only be kept for 1-2 days in the fridge or up to 6 months in the freezer.

It’s unwise to keep lobster on a countertop, so eat it as soon as possible.