Whether you’re using it as a high protein source for workouts, or for baking and desserts, liquid egg whites are a great convenient source.

But, how long do they last, and how do you tell if your liquid egg white has gone bad?

This article will cover all the signs to tell if liquid egg white is bad and how to store it properly. 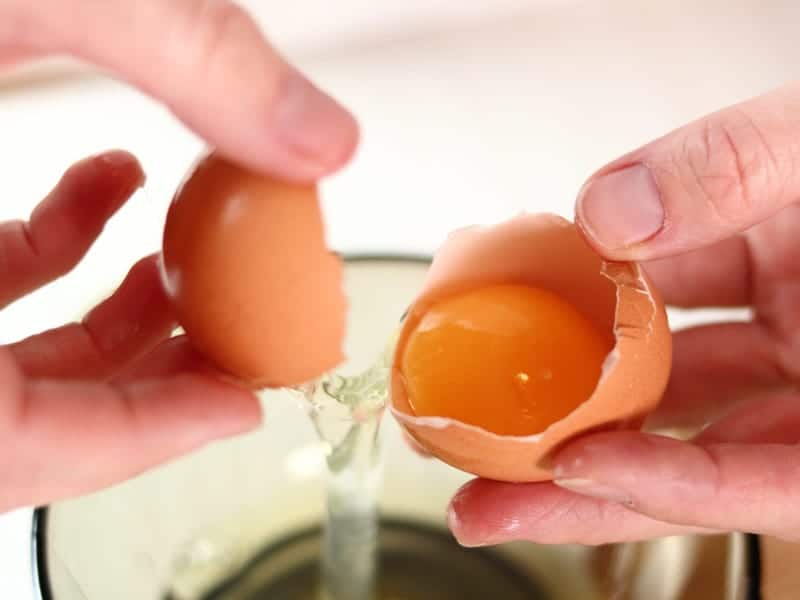 How to Tell if Liquid Egg White is Bad

Most purchasers will buy their liquid egg whites in pre-packaged commercial containers. Usually sold in 1-1.5lt cartons, with a clearly visible Use By or Best Before date stamped on the outside.

But, you can make your own liquid egg whites simply by cracking open and separating fresh eggs; whites into one bowl/bottle, and the yolk into a different vessel. Regardless of where your egg whites came from, how do you tell if they’re still safe to eat?

Egg whites should be transparent, and kind of yellow-tinged. You shouldn’t see any other colours in your liquid eggs, whether homemade or commercially produced.

Any hints of red (blood from the hen) or other discolouration should be seen as spoiled and discarded. Commercially produced liquid egg whites should have an even and loose consistency, with no lumps or floating bits.

Freshly cracked egg whites may have a milky-white ‘string’ floating within them, this is called the ‘chalazae’ and is perfectly safe to eat.

This is what you’ll most likely notice first; the smell or lack thereof. If your liquid egg whites are fresh, there shouldn’t be any detectable smell.

But, if your liquid egg whites are going bad, or already past their best, the smell is unavoidable – even if the carton hasn’t been previously opened.

The odour you need to watch out for is sulphuric, or ‘rotten egg’ smell, in any strength is a signal that the egg whites have turned and are no longer safe to eat.

The main difference between DIY egg whites and commercial liquid egg whites is the pasteurisation process.

This process ensures the egg whites are safe to eat by removing possible contaminants through sterilisation, and also increases shelf life, but it does make them much thinner and runny.

Fresh egg whites, in their natural state, will have two identifiable parts; the albumen or egg white, and chalazae, little stringy bits that suspend the yolk in the albumen. The thicker the albumen, the fresher the egg white, equally, if an egg white is really runny, it’s much older.

However, commercial egg whites will have the same consistency as old egg whites from an egg, so it could be hard to tell which is which, as they don’t mean the same thing.

So, for liquid egg whites from the supermarket; look for clear and long ‘Use By’ date stamps, and for fresh eggs; the thicker the egg white, the better and fresher the egg.

Liquid egg whites shouldn’t be consumed if there’s any doubt as to their freshness, if they’ve gone bad, or if there is any question that they are safe to eat.

Liquid egg whites have no distinct flavour when fresh, but if they’ve gone bad, there will be a hint of sulphur, or rottenness with every mouthful. It is unwise to swallow any egg product that tastes even faintly sulphuric, as this can lead to severe food poisoning.

It’s highly unlikely you’ll see any signs of mould on your liquid egg whites, without noticing a truly foul odour first. Needless to say, any hint of mould and your egg whites should go straight in the bin.

Whilst it’s important to follow the manufacturers’ guidelines for shelf life, it’s also important to be able to judge the shelf life of your food without them.

How Long Does Liquid Egg White Last In the Fridge

Liquid egg whites keep very well in the fridge as long as they’re kept cold at all times. Any fluctuations in temperature can adversely affect the egg whites, and hasten their age.

Kept in optimal conditions, at or below 4˚C/39˚F, and away from warm drafts when the door is opened, your unopened liquid egg whites should last for around 10 days.

However, once opened this time drops to 3 days. Fresh egg whites will only keep for 3-4 days in the fridge, so it’s better to crack them fresh as needed.

How Long Does Liquid Egg White Last In the Freezer

Lquid egg white or freshly separated keep for ages in the freezer.

On average, egg whites will keep for up to 1 year in the freezer without incident, as long as the temperature is kept below 0˚C/32˚F, and the frozen egg whites aren’t exposed to warm drafts.

How Long Does Liquid Egg White Last on the Countertop

As with most high-protein foods, on the countertop at room temperature is the worst place, and they will go bad within a couple of hours.

Whilst it’s fine to let your egg whites come up to room temp to use for cooking (as in for sponges etc), this should only take 10-15 minutes, and they should be kept covered until needed.

How To Store Liquid Egg White

As mentioned above, liquid egg whites keep best when they’re kept at stable temperatures, whether in the fridge or freezer. Below are the best ways to store and protect your egg whites for maximum shelf life.

How To Store Liquid Egg White in the Fridge

Try to keep your liquid egg whites in the coolest part of your fridge and in their original packaging, unopened, until needed.

If possible, you can always transfer any leftover egg whites into a new container that’s smaller and leaves less room for air contact with the liquid egg whites, even better if you can make this container airtight. This will help lower the amount of exposure and prevent premature spoilage.

How To Store Liquid Egg White in the Freezer

Tuck your unused liquid egg whites into airtight thick plastic containers or bags, and put these containers deep within your freezer. It’s also worth noting the date on the outside of the container, so you use the oldest egg whites first.

How To Store Liquid Egg White on the Countertop

Whilst this is the least advisable, you can safely keep them briefly on your countertop prior to use. Just remember to keep them in an airtight container, and don’t leave them out for any longer than absolutely necessary.

Liquid egg whites are a great and convenient source of protein, and whilst they look runny they’re perfectly safe, but if they don’t smell right, you shouldn’t use them. Keep your egg whites in your fridge for up to 10 days unopened, or 3 days once opened.