This article will cover how to tell if beef broth and other common questions surrounding its storage. 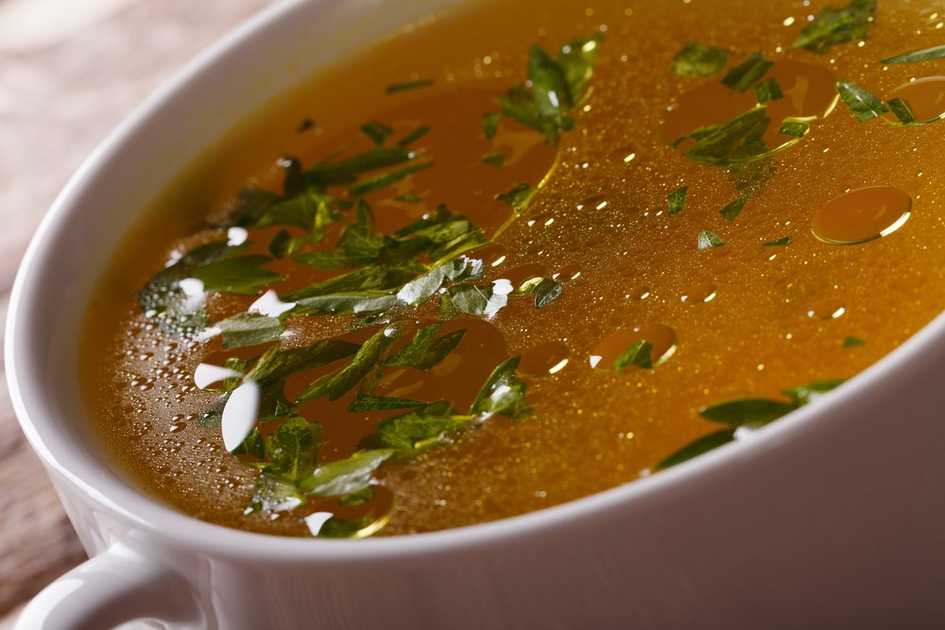 Is Beef Broth the Same as Beef Stock?

Beef broth and stock are very similar products. They are both liquid agents that are included in recipes to add depth of flavor. The main difference is the ingredients they are made with.

Beef broth is made with chunks of beef and vegetables, whereas stock is only made with bones and cartilage.

Generally, beef stock is harder to make. It is far more time consuming for the bones and cartilage to disintegrate. Collagen and marrow are released from bones after they have simmered in water for a number of hours.

Stock should be a neutral flavor that adds mouthfeel to a dish.

Beef broth on the other hand is far more potent due to the inclusion of vegetables and aromatics. Beef broth is made by reducing beef, vegetables, and other herbs in water.

The reduction process creates broth. Generally, broth will not be as flavorful as stock. It is often used in risottos, pasta sauce, soups, or stir fry for a subtle hint of flavor.

It is important to remember that beef broth shares similarities with beef bone broth. Bone broth is a gelatinous, hard broth that is made from bone marrow.

Bone broth is a nutrient rich health food that is often promoted as being distinct from ordinary broth or stock. This is incorrect. The bone broth you see at the health store is virtually identical to beef stock.

Signs That Beef Broth is Bad

These are the main signs your beef broth has gone bad:

Mould can easily float on the surface of beef broth. Mould will look white, grey, or green. It will first grow in small spots, then slowly get larger. You should dispose of any beef broth that has grown mould.

Beef broth may change from brown, to yellow or green when it has gone bad. Any noticeable change of color is a sign that the broth has gone bad. However, it is good to note that beef broth does normally have a greenish, yellow tinge to it.

Beef broth usually has a rich, meaty smell. If your broth has contracted a sour smell, it is a sign that the meat or vegetables in it have started to deteriorate. You should dispose of any beef broth that smells sour.

Is it Normal for Beef Broth to Have Chunks?

Beef broth should be smooth and silky. However, if you are making homemade beef broth, it is likely small chunks of vegetable, herbs, or gristle have snuck into the broth.

Chunks can easily be picked out with a spoon or you can siv the broth. Store bought beef broth will not have chunks in it as it is far more processed!

What Color Should Beef Broth Be?

Beef broth should be a brown color. Depending on how much beef you used (and how thick it is) the broth will either be light or dark brown.

If you are adding vegetables or herbs, you may find the beef broth has a slight yellow tinge. This is absolutely fine!

Does Beef Broth Have White Stuff In It?

Sometimes, yes! The white stuff in your beef broth could be;

How Do You Know if Beef Broth is Bad?

In order to know if the beef broth has gone bad you will need to open the container it is stored in and inspect the broth.

Open the container the beef broth is stored in. You should look out for any mould that has grown on the container itself, or on the surface of the broth.

Once the container has been opened you will be able to smell the broth. If the broth has gone bad you will be struck by a sour, unpleasant smell.

Look at the Texture of the Broth

Make sure to inspect the texture of the broth. Look out for flecks of mould.

There’s no need to follow these steps if you have purchased the broth from the store. If the broth has gone past its expiry date (listed on the bottle) you should dispose of it. You don’t have to inspect the broth as you already know it’s gone bad!

How Long Does Beef Broth Last?

Beef broth will last for different amounts of time depending on where it is stored.

Unopened, store bought beef broth can last in the cupboard for up to 3 years! Homemade beef broth should be transferred to the fridge immediately after cooking.

Opened beef broth can last in the fridge for 3-5 days. This applies to both store bought and homemade broth. After 5 days, the broth will start to spoil and may start to grow mould.

Beef broth can be frozen for up to 4 months. After this point, the broth can become susceptible to freezer burn and start to deteriorate.

Unopened store bought broth is best left in the cupboard, as it lasts longer there. The freezer is the best place to store extra broth left over from cooking.

Can You Freeze Beef Broth in the Carton?

Yes, you can technically freeze beef broth in the carton. However, it may be a little difficult to defrost the carton (as you can’t just throw it in the microwave).

It is recommended to transfer the broth into a plastic container. It’s microwave safe and far more convenient!

What is Floating in my Beef Broth?

It is most likely that there are bits of vegetable, herbs, beef, marrow, or collagen that are floating in your broth. You can easily spoon or siv these out. Alternatively, you can blitz the broth with a hand blender.

Mould could also be floating in your beef broth. Mould can easily float on the surface of liquids. Mould will look white, grey, or green. It will first grow in small spots, then slowly get larger.

Mould can be identified by its distinctive fuzzy texture. You should throw out any broth that has floating mould.

Do You Have to Refrigerate Beef Broth After Opening?

Yes, you should refrigerate beef broth after it has been opened or once you have finished cooking. Refrigeration keeps the broth fresh.

No! Freezing any kind of broth does not kill the nutrients. In fact, freezing is one of the best ways you can prevent the amazing nutrients in your bone broth from expiring.

However, the nutrients in your broth will start to die once the broth has been stored in the freezer for longer than 4 months.

What Happens If I Eat Or Cook With Expired Beef Broth?

Beef broth is a delicious, healthy addition to so many different recipes. Broth adds a lovely aromatic depth of flavour to food.

Beef broth should be a deep brown color. However, you may spot some white flecks in it. This is no cause for alarm unless of course, it’s mould.

A sour smell, discoloration, and mould are the main signs your beef broth has gone bad. You can store it in the cupboard, fridge, or freezer. Unopened store bought broth will last the longest in the cupboard.

Whereas to keep homemade broth as fresh as possible, you should be keep it in the fridge or the freezer.