Manchego cheese, it’s been on the culinary scene since forever, but it’s only in recent times that this Spanish cheese is beginning to be truly appreciated.

More and more, we’re seeing Manchego on the table, but how do you serve it, and are there any secrets on how to cut Manchego cheese? 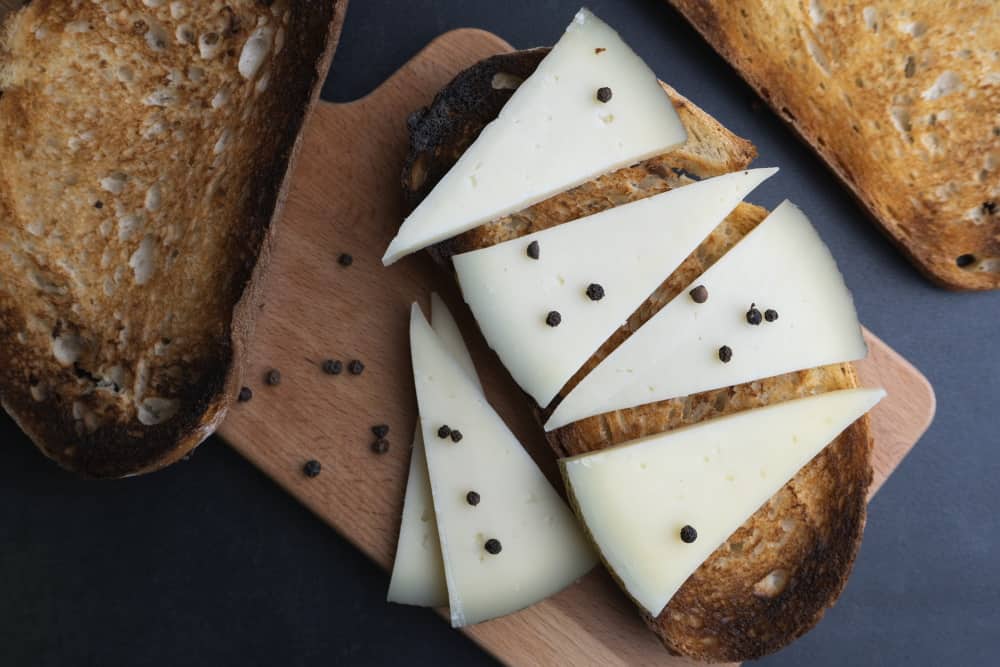 How to Cut Manchego Cheese

It’s easy to see why Manchego cheese is the most popular Spanish cheese; its salty-sweet-slightly nutty flavours, crumbly and flaky texture all make it ideal for use on cheese boards, grilling, or even grated over baked dishes.

Wheel: Manchego cheese is produced in wheels, and weighs between a half kilo (0.88lb) to four kilos (8.8lbs). Serving your Manchego whole is uncommon, although it is an ideal way to continue ageing your cheese at home.

Once cut into, the surface of the cheese is exposed and the protective rind can no longer perform its role – so the cheese is best consumed without delay. Wheels are aged between 30 days and up to two years.

Wedge: A wedge of Manchego is a unique way of presenting your cheese at a dinner party or as part of a cheeseboard. The rind is intact on most surfaces and affords guests the option to have as much or as little as they prefer.

It is worth noting that the rind should be removed before consumption, as it does not taste good at all.

Sliced: This is by far the most common presentation and is ideally suited to cheese boards. Displayed in either a ‘fan’ or in a long line, guests can take slices as they match their selection with a range of fresh and dried fruits.

Grated: Probably the best way to use up bits of leftover cheese, grating your Manchego over baked dishes will give the recipe a hint of something unexpected. Slow-cooked albondigas, in a rich tomato sauce, are elevated to the next level with a generous grating of Manchego cheese.

When it comes to physically cutting your Manchego cheese, this is best done on a solid and dry surface, like a clean chopping board, and with a large sharp knife.

Follow these easy step-by-step directions when deciding how to cut Manchego cheese:

Step 1: Place a damp cloth or tea towel under your clean chopping board – this is to prevent the board from slipping as pressure is applied to the cheese during slicing.

Step 3: Carefully, place the sharp edge of the knife across the entire width of the wheel of cheese, and slowly push down.

Note: By pushing slowly you have time to notice if there is any slipping of the cheese on the board, and to avoid any accidents as a result.

Step 4: Separate the two halves of Manchego cheese, and repeat to cut into quarters.

Step 5: Once formed into quarter wedges, you may be able to peel the outer rind away from the cheese.

If not, carefully place a cut edge of the cheese on the chopping board, and then using the sharp knife, slowly cut away the rind from the ‘top’ and the ‘bottom’ of the wedge.

Step 6: Lay the Manchego cheese back on the ‘bottom’ face, and carefully remove the round ‘back’ of the cheese. This may peel away, or require more encouragement with the knife.

Step 7: Once the quarter wedge of Manchego cheese is stripped of all the rind, place it once more on the chopping board.

Carefully slice the cheese, starting at the pointed end first, into 3-4mm slices lengthwise. This is the best option for cheeseboards, or for adding Manchego into grilled sandwiches.

Alternatively, you can slice the wedge of Manchego across the wedge, and present it as rustic chunks which work well with an antipasto-style starter.

You can also have your cheesemonger prepare your Manchego as required, or purchase pre-sliced cheese if this is easier.

What is Manchego Cheese?

Hailing from deep within the Mancha in Spain, this cheese is named after the breed of sheep that wanders its wilderness; the Manchega sheep. As it ages, it’s either a semi-hard cheese (semicurado) or hard cheese (curado) and has an iconic herringbone rind. The flavour of Manchego can be described as having a light sweetness and a distinctive tang.

Note: Manchego fresco is a young Manchego, but as it has a short shelf life, it’s not common outside of Spain.

Manchego is made in a similar fashion to most unpasteurised cheeses, differing only in having olive oil brushed onto the outer rind; to lock in moisture and flavour. With a minimum of 2 weeks of ageing for fresco, the most common maturation is three months (semicurado) and longer than a year for the oldest (curado).

As the cheese ages, it develops a stronger and sharper flavour, and the texture becomes more granular and flaky. For this reason, and so you can best enjoy its unique flavours with suitable pairings like fruit or Cava, or for other culinary uses it’s important to know how to cut Manchego cheese.

It might surprise you to learn there’s more than one Manchego cheese. In fact, whilst there are three main varieties from Spain, and one American-style Manchego, all of them have unique flavours and properties that can influence how to cut your Manchego cheese.

Manchego Artesano; an older Manchego aged for a minimum of six months, there are several products available from a range of producers, names to look out for including Mitica and Despaña.

This Manchego is crumbly and salty with calcium crystals throughout, and secrets a light oil on the surface when cut. A ten-month curado is a perfect match for fresh stone fruit, figs, chorizo, or a bold Rioja.

Oveja al Romero; combining the unique flavours of an aged Manchego with those of fresh rosemary from the Mancha area, this cheese stands out from the crowd.

The Manchego cheese is encased first in a liberal coating of olive oil, and then packed in dried rosemary; this gives the cheese a flavour as distinctive as the terroir that the Manchega sheep graze upon.

This Manchego cheese infuses with the dried rosemary for an even greater aroma and nutty-woodsy flavour that pairs fantastically with jamón ibérico and a glass of Tempranillo.

Idiazábal (Basque); is not a Manchego cheese, as it comes from the Pyrenees, but it does have a similar flavour to its Manchega cousin. The main difference between the two is the smoky taste of the Idiazábal, owing to its history of being stored in wood-burning chimneys.

Just like Manchego, Idiazábal has DOP (or POD: Protected Designation of Origin) status and is made from raw sheep’s milk. It has fewer holes than Manchego, and a brown or dark golden yellow rind. It is dense and drier and has a sweet nutty flavour. Ideal with apples, jamón, or a Garnacha wine.

GranQueso (American style from Wisconsin); the most noticeable difference with GranQueso is that it is made in the USA and from cow’s milk. As a Manchego-style cheese, it is not an authentic Spanish cheese but does work perfectly for dessert cheese boards, or as a melting cheese with an extra bit of kick.

How to Store Cut Manchego Cheese

Like most cheeses, Manchego is best kept whole in blocks or wheels at approximately 5-10˚C for up to 3 months. Kept at room temperature, Manchego cheese will last for up to 4 days.

Fridge: Cut Manchego cheese should be kept in waxed wrapping paper, and then in an airtight container in your fridge.

Freezer: Manchego cheese can be frozen, and this is best done in wedges or smaller wheels. The cheese stores best when wrapped in paper, and then placed into airtight freezer bags or containers – being careful to remove as much excess air as possible. Once frozen, Manchego cheese will keep for 6 – 12 months.

Note: frozen Manchego will have a grainier consistency than Manchego that is kept in the fridge.

Countertop: It is unwise to keep sliced Manchego cheese on your countertop or worktop surface, as the exposed slices will attract and produce bacteria quickly. You can, however, keep a wedge of Manchego for up to 4 days at room temperature.

To keep your Manchego at room temperature it is wise to keep it in a ‘cheese keeper’ – a dish that will allow some air movement, and that is not completely airtight, but also prevents flies or other pests from coming into contact with the cheese.

Manchego cheese; an iconic Spanish cheese made from the milk of Manchega sheep, and comes from the heart of Mancha.

It is best served sliced on cheeseboards, or with hearty Spanish wines.

Get Started
X
We use cookies to ensure that we give you the best experience on our website. If you continue to use this site we will assume that you are happy with it.Ok