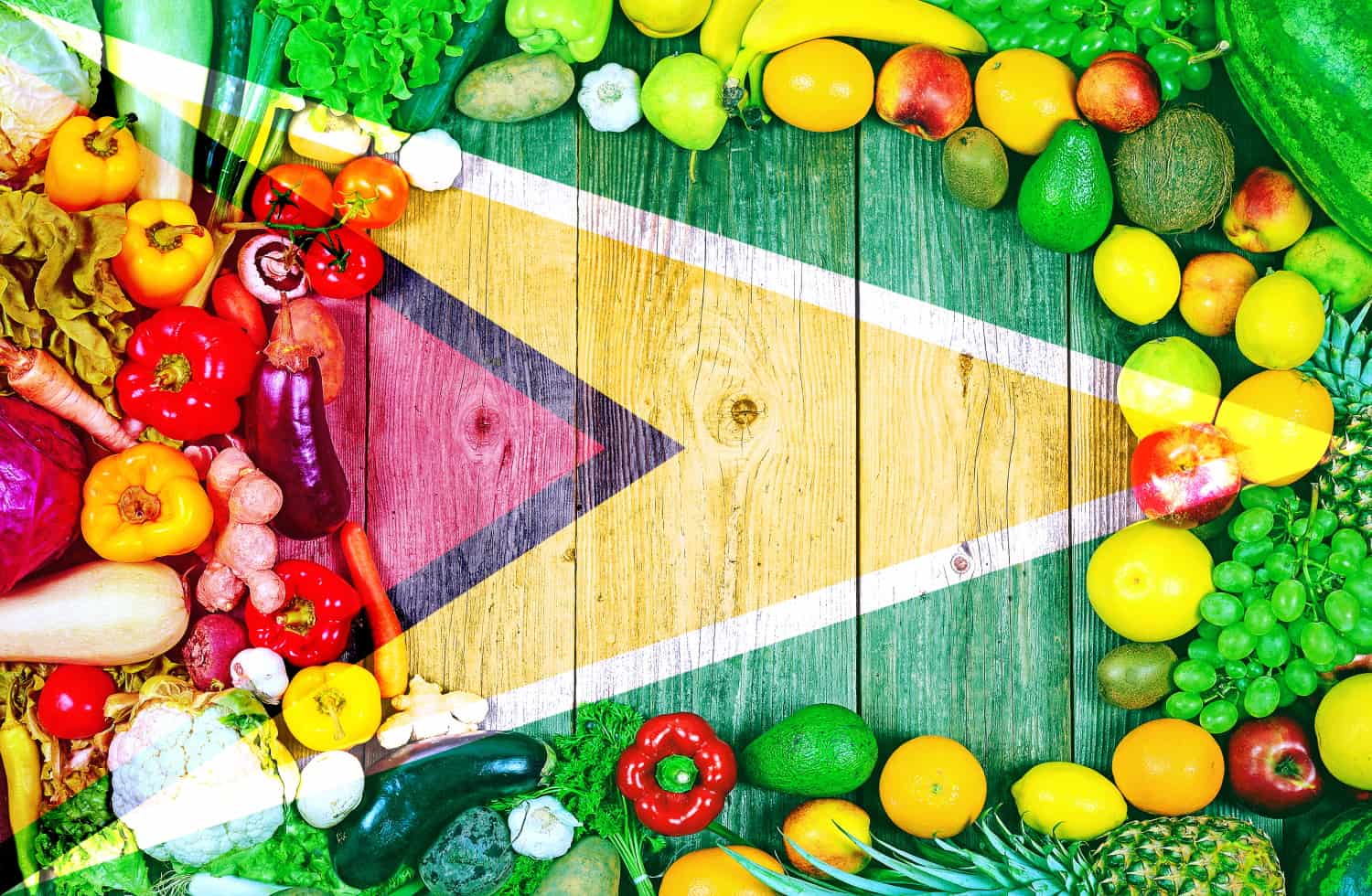 Located in the northern reaches of South America, and with a coastline on the Caribbean Sea, the traditional flavours of Guyana’s cuisine are intricately linked to the region’s history. Over the years they have developed through the blending of the different cultures that have called the country home.

This means that menus in Guyana are able to incorporate dishes that have evolved not only from native Amerindian foodstuffs, but also from African, Indian, Creole and British traditions.

The British influence over its former colony can be seen best in Guyana’s love of breads, while you don’t have to go far to find other dishes more usually found in Africa or on the Indian subcontinent.

Here are the dishes we think best represent the nation. Look out for these traditional foods from Guyana whether you’re visiting the country, or sitting in a restaurant serving its cuisine. 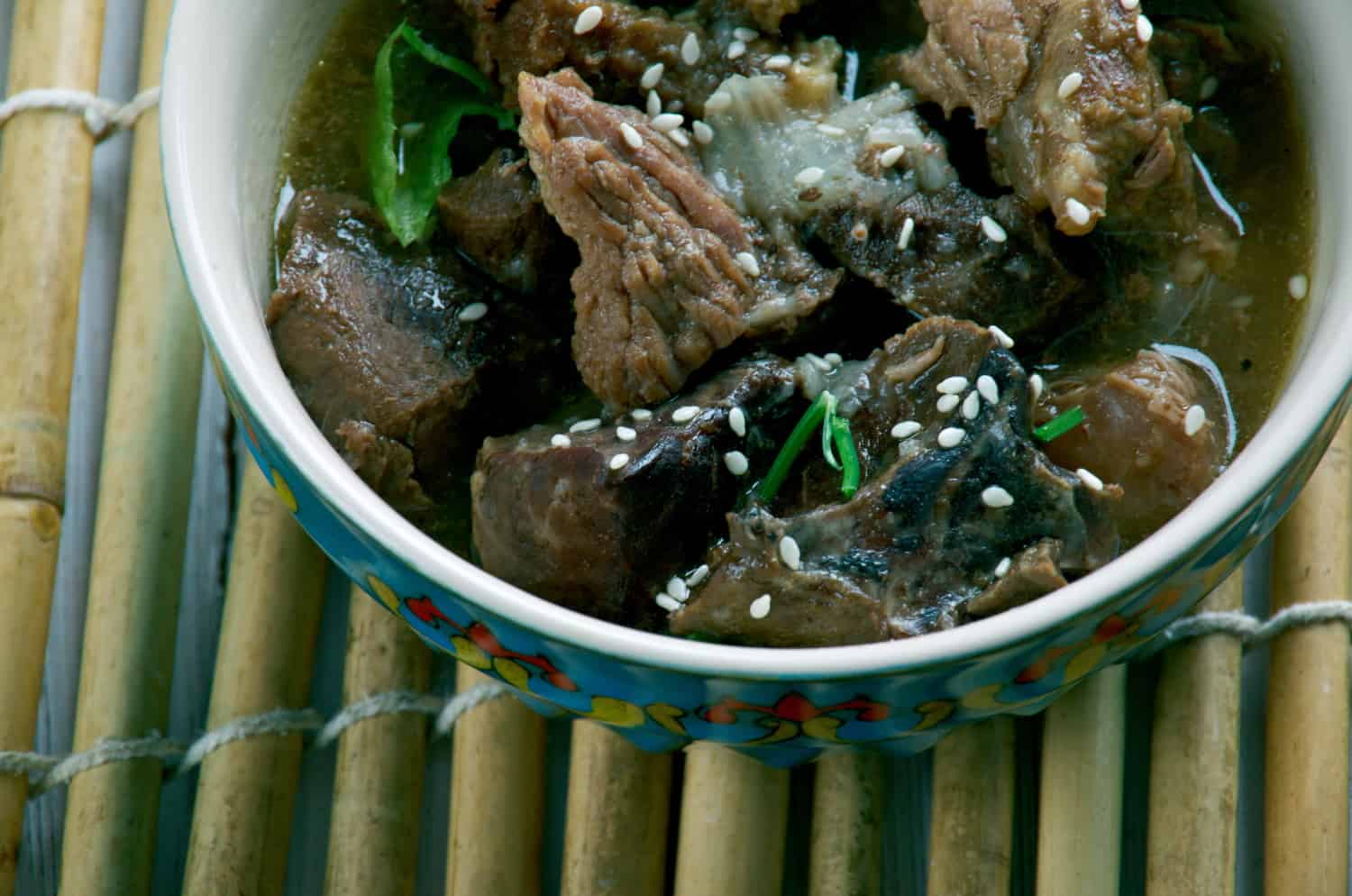 As a dish first prepared by the country’s Amerindian peoples, pepperpot is perhaps the most traditional dish it is now possible to taste from Guyana.

It is also the country’s national dish, and a popular choice for big celebration days such as Christmas, partly because it requires hours of cooking time.

Pepperpot is a stew with a deep, almost black sauce or gravy. This unusual colour comes from the use of cassareep in the dish. Cassareep is a liquid made from evaporating off the juice of cassava until it has thickened to be like treacle.

Heady spices such as clove, cinnamon, and cayenne pepper (a local spice) are then added. Chilli peppers and red meat are added to the cassareep to complete the dish.

The dish takes its name from the clay pot, or pepperpot, in which the cassareep would be boiled down. Being clay, it would absorb some of the flavour of the liquid, and release it into whatever dish was cooked in the pot next.

Cook up rice is the local Guyanese variant of one of the Caribbean’s most distinctive dishes – rice and peas.

Unlike in neighbouring countries of the region, cook up rice invariably also includes pieces of chicken, adding protein and an additional flavour profile to the dish.

However, like its neighbours, the Guyanese version of rice and peas will more often than not be prepared using red kidney beans than the pigeon or cow peas that give the dish its name.

Every family has its own recipe for this staple dish. However, generally speaking, the beans (or peas) will be boiled with pimento seeds and garlic until soft. When tender, Scotch bonnet peppers, onions, ginger, and coconut milk are added, as is the rice. It’s ready to eat when the rice is fluffy and soft.

Cook up rice is thought to have reached Guyana by way of the enslaved Africans caught up in the transatlantic slave trade. There is a similar dish in the West African country of Ghana that goes by the name of Waakye.

Pera (or peda) is a dish that satisfies Guyana’s sweet tooth. It originates from northern India, and came to this corner of South America when the British brought over workers from the region to replace freed slaves in the early nineteen hundreds.

Pera is what is known as a milk sweet in India, and is normally served in small wedges or balls as a dessert or with a cup of tea.

The main ingredients that go into making pera are khoa, a dried or thickened milk, and sugar. Prepared simply in this manner, pera has the taste of condensed milk, but can also be flavoured with spices included cardamom and saffron.

Another common celebratory dish is the dessert of black cake. Like pepperpot, it has a close association with the Christmas period, as well as Old Year’s Night (New Year’s Eve).

And like pepperpot, black cake takes time to prepare. But in black cake’s case, that’s weeks, not hours.

It begins with families soaking dried fruit in rum in the weeks leading up to the big day. When Christmas is approaching, the now sticky fruit is mixed into a dough made with caramelized sugar.

Once baked in the oven, the resulting cake is similar to a European fruitcake, though with a texture that is less dense – and not necessarily black.

Tennis rolls are a type of round bread roll found in Guyana that have a unique semi-sweet flavour that leaves many who try them baffled.

They are baked in the same way any bread roll is, but while still warm each roll is brushed with melted butter to enhance the richness of the dense but soft buns.

A staple of the streets, tennis rolls are normally eaten as a sandwich with strong cheddar cheese as the filling.

Guyana’s Caribbean Sea coastline means fish is a frequent addition to meals in the country. The warm sub-tropical waters play host to all manner of species, including bangamary. When combined with the flavours and cooking style brought over from India, the result is fantastic fish curries.

Like all curries, Guyana’s fish curry begins with the grinding down of the spices, if they are still in their raw state. They include cumin (geera), garlic, curry powder and garam masala.

Onion and tomato are also common ingredients to fish curry, which is quick to prepare as the fish takes so little time to cook in the pan after the curry paste has been created.

This fish curry can be served with either rice or roti. Vegetarians are able to enjoy the same tastes and aromas by opting instead for katahar curry, made from the jackfruit.

Having a third dish of south Asian origin on our list of traditional Guyana dishes demonstrates just what an impact those first migrants from India had on the country’s culture.

Achar is a popular condiment or side in Guyana, made from the pickling of fruits or vegetables with vinegar together with spices.

It is most commonly prepared using unripe mangoes, and only the green flesh is ever used. When finely chopped, the mangoes are squeezed to remove as much liquid as possible. Next, chopped chilli peppers are added, usually varieties that are extremely hot, such as that known locally as ‘ball of fire’.

The mix is put into jars and filled to the top with mustard oil, which prevents the growth of moulds. Then the jar is left to pickle in the sun (or somewhere warm) for around a week. While now ready to eat, achar gets better (and spicier) with age, and will keep for many months.

Guyana’s egg balls must surely stem from its time as a British colony, since they bear an uncanny resemblance to scotch eggs.

However, instead of a whole shelled hard-boiled egg being wrapped in minced pork meat, covered in breadcrumbs and deep-fried, the local version normally wraps the hard-boiled egg in cassava. This will have first been boiled and mashed into a paste-like consistency which holds when pressed around the egg.

On the street, egg balls are usually offered up with a dip called mango sour, which has a similar ingredients list to achar (without the mustard oil), but blended and cooked down into a dipping sauce.

For those who avoid eggs, an alternative version exists of deep-fried cassava balls, which take the name cassava puffs.

When it comes to drinks, its peanut punch that takes the crown as one that is both traditional and still popular.

Depending on the exact circumstances, it can be made either with whole peanuts that are then crushed, the most authentic method, or with peanut butter. To this is added milk and sugar, creating a drink similar to a light milkshake or the lassi of the Indian subcontinent.

Complimentary spices such as nutmeg or cinnamon are sometimes sprinkled into the brew, and rum can also be added to make it alcoholic.

You’ll find home-brewed versions of both non-alcoholic and alcoholic peanut punch on the street, and factory-made versions in supermarkets across the country.

While it may take a little getting used to the idea of eating iguana for some, iguana stew is common in Guyana and a dish that has its origins in the region rather than further afield.

Rather like any other meat, it is the flesh of the legs of the iguana that is predominantly used is the preparation of the stew. Often the meat is poached in salted water, before being cut into pieces and added to the stew’s other ingredients.

These include garlic, onion, tomatoes, and green peppers, as well as annatto, a reddish condiment made from the seeds of the achiote tree, a native plant of the region.

Also known as sweet potato pie, yam pie is one of the few dishes in Guyana that appears to have reached the country via the southern United States.

It takes the majority of its taste from sweet potato, which is mashed together with condensed milk, sugar, eggs, and spices like nutmeg to form a loose paste or thick custard.

This is then usually placed into an open pie shell or pastry tart case and baked in the oven until firm. The yam pie is then served in slices either hot or cold, and has a slightly fibrous yet smooth texture on the tongue.

Cassava bread was first made in Guyana by its indigenous Amerindian tribes. It is made by grating the skinned cassava’s tuber into thin strips so it resembles grated cheese.

The tribes would then place the grated cassava into a long sock-like structure made of reeds and vines, which acts as a sieve to separate out the liquid from the solid cassava.

A number of tribes ferment this liquid to produce alcoholic drinks called parikari and sarawi, with parikari by far the stronger of the two.

After being sieved, the grated cassava is dried in the sun to remove the last remains of any liquid. It can now be cooked on a large flat pan over an open fire to create the bread, which has an appearance closer to that of a pancake.

The finished product has very little taste of its own, but is often enjoyed as an accompaniment to pepperpot.

Pholourie has comparable dishes right around the world, from West Africa to southern India. It is the name given in Guyana to a snack food of spiced savoury deep-fried dough balls that are eaten with dips and sauces.

Best when served warm, pholourie is made from a dough of flour and split pea powder. Spices added to this mix include cumin and turmeric, alongside garlic, onion, and pepper.

Pholourie were the result of Indian workers adapting the recipes of their homeland to the ingredients they could find in the Caribbean. It’s thought that they were first made in nearby Trinidad and Tobago before crossing the straits to Guyana.

In addition to being eaten as a snack food, pholourie can be added to kadhi, a thick sauce of gram flour and yoghurt.