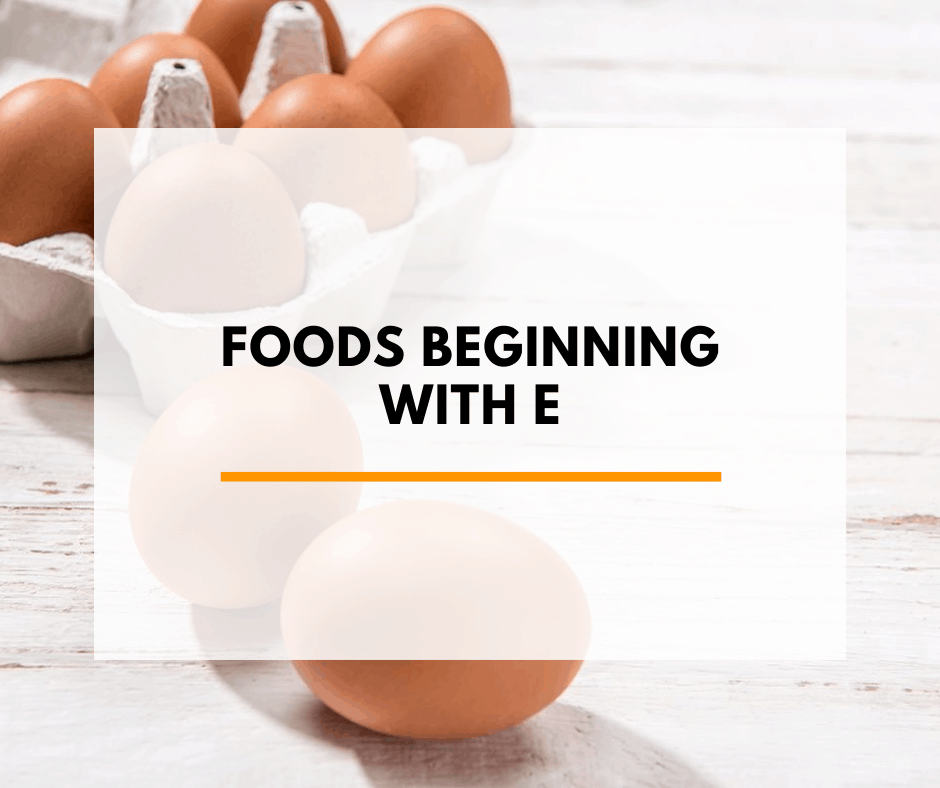 There are so many great foods that start with the letter E. Some you’ll wonder if they exist whilst others you’ll find worldwide.

This article contains 27 foods that begin with the letter E. You’ll brush up on your food knowledge and become a trivia expert in no time.

The elderberry fruit can come from various varieties of the Sambucus tree. The most emblematic variety of this fruit is perhaps the European, or black, elderberry.

The European elderberry (Sambucus nigra) is considered to be an important plant for natural medicine uses. Elderberries are packed with antioxidants, which can help to strengthen your immune system and decrease inflammation.

Edamame, a very popular food in East Asian cuisines, consists of the preparation of immature soybeans in the pod. Edamame pods can be boiled, steamed, or blanched and are often served with salt or other condiments.

These green bean pods are sold fresh or frozen, and have an impressively high protein content, along with being rich in folate, manganese, and vitamin K.

Also referred to as aubergine, eggplant is a member of the nightshade family and is a (usually) purple, bulb-shaped vegetable. They are rich in fiber, potassium, and vitamins B6 and C.

Eggplants are a key element in dishes from a number of world cuisines, like eggplant parmesan (Italian), baba ganoush (Middle Eastern), and ratatouille (French), just to name a few.

Endives are a leaf vegetable that, when eaten raw, have a strong bitter taste. However, after they are cooked, they can add a nutty and soft sweetness to dishes.

Endives are a part of the chicory family and resemble a slightly yellow piece of lettuce. They can help to improve bone, liver, and digestive health, and are loaded with antioxidants.

This leafy green vegetable is, like endive, another member of the chicory family. Escarole is sold in bunches and resembles a head of lettuce with short, wavy leaves.

The vegetable is especially popular in Italian cuisine, and it is a key element in Italian wedding soup. It is low in calories and especially rich in fiber, calcium, iron, and vitamins A and C.

This semi-hard cheese is of Dutch origin and can be made with either goats or cows milk. Edam is aged for at least a month and up to a year, and is often coated in red wax.

The popular cheese snack Babybell is essentially a tiny French version of edam cheese. Edam keeps very well and will not spoil, but will harden if stored improperly.

Freshwater eels are commonly used in Japanese and Chinese dishes, and unagi is a typical sushi roll that consists of eel and cucumber.

But aside from their popularity in Asian cuisines, eels are consumed all around the world: in England as “jellied eels”, in Spain as gulas, and in Italy as capitone fritto, or fried eel.

Eel must always be cooked, as its blood is poisonous to humans and is toxic enough to be lethal.

Chicken eggs, more commonly just referred to simply as eggs, are an incredibly popular food in most cuisines, and it is estimated that global egg consumption exceeds 1 billion eggs annually.

Thanks to their affordability and accessibility, they form an essential part of countless dishes. Eggs are an especially important element in baking, where they add structure, leavening, color, and even flavor.

One egg has less than 80 calories and more than 6 grams of protein. However, those watching their heart health should limit their egg intake, as just one contains over 200 grams of cholesterol.

Egg noodles should not be confused with fresh pasta, the latter of which also contains small amounts of eggs. Egg noodles, however, contain a higher concentration of eggs: around 3 eggs per 2 cups of flour.

Egg noodles provide more protein than traditional pasta, and are utilized in a variety of cuisines. These noodles are quite common in Chinese dishes, like chow mein, and are often used in stroganoffs and noodle casseroles.

This medium-hard cheese originates from Emmental, Switzerland (near Bern). Made from cow’s milk, it has a mild, slightly buttery flavor and is rich in fat and calcium.

It has large holes that are formed by the warm temperatures maintained during the cheese’s maturation process. Emmental is an excellent melting cheese, and for that reason is often used in fondues, cheese gratins, casseroles, and pasta dishes.

English sole is a small, reddish flatfish that is commonly used in British cuisines. It has a flaky flesh and delicate flavor, and can be grilled, steamed, pan-fried, deep-fried, and more.

Perhaps the most emblematic sole dish is the French sole meunière, in which the fish is dredged in flour, pan fried in butter, and served with a brown butter, lemon, and parsley sauce.

Escalope refers to a piece of boneless meat that has been pounded thin, coated with breadcrumbs, and usually fried. Common types of meats used in this cooking method include turkey, chicken, pork, and, most popularly, veal.

Many countries have a version of escalope, such as the Austrian wiener schnitzel, which is made with veal, and the Italian saltimbocca, which consists of thin pieces of veal or chicken that have been wrapped in prosciutto and sage.

This emblematic French dish is made of land snails that are removed from their shells and cooked in garlic butter, broth, wine, or another sauce.

Various versions of the snail dish exist in other Mediterranean countries, like Spain and Portugal, and escargot is most commonly served as an appetizer, or hors d’oeuvres.

Extra-virgin olive oil, also referred to as EVOO, is a high quality, unrefined oil that is produced from cold-pressed olives.

Regular olive oil is made by combining virgin olive oil (unrefined) and refined olive oil, meaning that heat and chemicals are used in extracting the oil from the olives.

EVOO, unlike normal olive oil, contains practically no oleic acid, which means that the fat hasn’t broken down into fatty acids, and has a strong, distinct taste.

This unrefined oil provides antioxidants and anti-inflammatory effects, so apart from adding depth and flavor to your cooking, it is also good for your health.

This traditional Chinese soup is made by beating raw eggs into boiled chicken broth, giving the soup its wispy consistency.

It is often garnished with black or white pepper, finely chopped scallions, and tofu, and has become a staple appetizer at many American-Chinese restaurants.

This soup is very low in calories, making it a great starter for a carbohydrate-heavy takeout dish like noodles or fried rice.

This fried appetizer is another common starter in American-Chinese cuisine. Egg rolls consist of a thick, crispy wheat flour wrapper that is coated in egg and fried, and they are often filled with shredded cabbage, chopped meat, and other vegetables.

They differ from spring rolls in the fact that they have a crispier wrapper and are always fried. Spring rolls, on the other hand, can be baked, fried, or served raw, and are not coated in egg.

This salad is made up of hard boiled eggs, mayonnaise, mustard, salt, and pepper, and celery and/or onions are often added.

It is traditionally served on a sandwich in the United States, though it most likely originated in Europe (perhaps Great Britain) shortly after the invention of mayonnaise in the 1800s.

Though not as common as the use of hard boiled eggs, the eggs in egg salad can also be scrambled.

Parmigiana di melanzane, or eggplant parmesan, is an Italian dish made with fried slices of eggplant, cheese, and tomato sauce. The eggplant is first sliced, coated with breadcrumbs, and fried.

Then, the eggplant slices are placed in a dish and layered with mozzarella and parmesan cheese and tomato sauce, after which the dish is baked. It has its origins in the south of Italy, with the regions of Campania and Sicily both claiming ownership of the dish.

This popular American breakfast was supposedly created in New York City over 100 years ago, though it still forms an essential part of brunch menus today.

Thought to have been brought to the Iberian peninsula by the Moors, empanadas gained popularity in Spain and Portugal in Medieval times, after which they were introduced to Latin America, where they now form an integral part of the region’s culinary tradition.

Empanadas are fried or baked pastries whose fillings can vary from savory to sweet. Some of the most popular types of empanadas are the Argentine beef empanada, the Dominican pastelito, and the traditional Galician empanada, which is more reminiscent of a round or square flat pie and is often filled with bell peppers, tomato, onion, and seafood.

This beloved Mexican dish is made by rolling a corn tortilla around a filling and covering with a savory sauce, and the first versions of enchiladas can be dated back to Aztec times.

Nowadays, common fillings include meats, cheese, potatoes, beans, and vegetables, and the most authentic enchilada sauce is made with tomatoes and a mixture of dried Mexican chili peppers, including the ancho and guajillo chile varieties.

An éclair is a French choux-pastry dessert. Choux is a pastry dough that rises using steam (no yeast, baking powder, or baking soda), and is also utilized when making cream puffs and profiteroles.

The pastry can be filled with either chocolate custard or pastry cream and is often dipped in fondant icing, typically chocolate.

The dessert is thought to have been created by French chef Antonin Carême, who is widely credited with creating the chef and pastry chef professions.

When it comes to sweet treats, the term “elephant ears” can have two meanings. First off, palmiers are a French cookie that are often referred to as elephant ears. They are made with puff pastry that has been rolled up, sliced, topped with sugar, and baked.

However, the term can also refer to a popular American carnival food that consists of fried yeast dough topped with powdered sugar.

English muffins (or just muffins in England) are a small, round, yeast-leavened bread often eaten for breakfast in North America and Australia.

These flat rounds are typically sliced in half, toasted, and buttered and can be topped with jam or honey or served with eggs and some sort of breakfast meat.

Contrary to their name, English muffins do not hail from England, but rather were invented by a British ex-pat baker in New York City at the end of the 1800s.

This pastry was created in Mallorca, Balearic Islands, Spain, where it continues to be an emblematic element of their culinary tradition.

However, it is consumed across Southwestern Europe, Latin America, and Southeast Asia. Ensaimada is made with flour, eggs, milk, sugar, and pork lard, which gives it its rich flavor. It is often coated with powdered sugar and can be filled with pumpkin, sweet cream, and chocolate fillings.

Eggnog is a traditional milk punch typically consumed around the holidays. It can be prepared either alcoholic or non-alcoholic, and it is usually made with milk, cream, sugar, whipped egg whites, and egg yolks.

If you are making an alcoholic version, popular liquors include rum and brandy. Winter spices, like clove, cinnamon, and nutmeg, are often included, as well as vanilla.

This coffee is brewed using an Italian method that consists of pressurizing boiling water through finely-ground coffee beans (check out the best coffee beans here).

Espresso is much more concentrated and stronger than traditional drip coffee, and is used to make a wide variety of coffee drinks, such as cappuccino, latte, macchiato, americano, mocha, and more.

Espresso has a thicker, more syrupy consistency than drip coffee and is characterized by the thin layer of crema, or foam, that forms on the top of the beverage as a result of the pressurized brewing process.