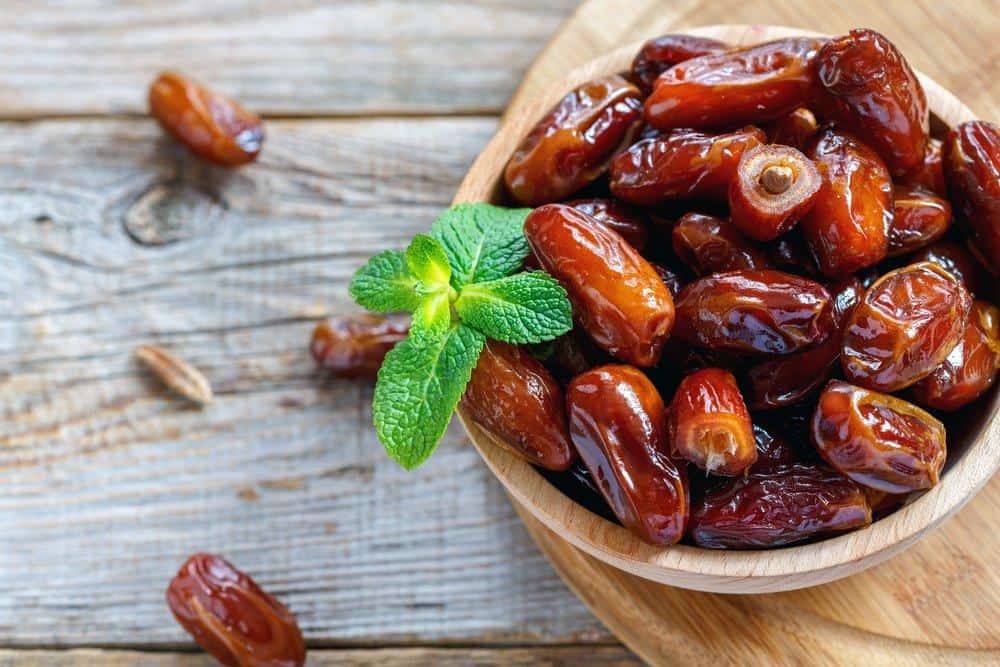 There are so many great foods that start with the letter D. Some you’ll wonder if they exist whilst others you’ll find worldwide.

This article contains 24 foods that begin with the letter D. You’ll brush up on your food knowledge and become a trivia expert in no time.

Dates are a tree fruit native to the Middle East that grow on date palms in clusters, much like grapes.

They have an extremely high sugar content (63 grams per 100 grams) and can be eaten fresh or dried. Some common date products include date syrup and date sugar, and dates come in a number of varieties, such as Medjool, Dayri, and Barhi.

Given their high sugar content, dates are very rich in carbohydrates, at 75 grams net carbs per 100 grams.

Also referred to as a pitaya or strawberry pear, the dragon fruit grows on cacti and is native to southern Mexico and Central America.

The most common varieties have bright red skin and green scales, giving them a slight resemblance to a dragon, hence the name. Dragon fruit’s taste is described as being a cross between a kiwi and a pear.

This fruit is very low in calories and provides a rich source of fiber and magnesium.

Daikon radish, also known as white radish, Chinese radish, or Japanese radish, is a long, white, tube-shaped root vegetable that is very popular in a variety of Asian cuisines.

It can be eaten raw or cooked, and it is also often pickled. Daikon radish greens can also be consumed, and they serve as a great addition to soups and salads.

A 100 gram serving of daikon radish contains only 18 calories and over a third of the daily recommended value of vitamin C, making it an incredibly healthy food.

Dashi refers to a group of Japanese stocks used with the purpose of increasing umami flavor in dishes. It is the base for miso soup and other savory soups and broths, and can contain a variety of ingredients.

It is made by soaking kombu (a type of seaweed) in hot water and adding flakes of dried fish, seafood, or mushrooms, then straining out all of the solids. Some common dashi ingredients include dried bonito, dried sardines, dried shrimp, dried scallops, dried mushrooms, and toasted soybeans.

Though most commonly used in soups, it can also be incorporated into grilled foods to increase umami flavor.

Deviled ham is simply ground ham mixed with a variety of spices which can include hot sauce, cayenne pepper, hot peppers, and/or mustard.

In the culinary world, the term “deviled” typically refers to the addition of many spices to a particular food, hence the name of this spiced ham, which originated in the southern United States.

Though it is most commonly known as a canned good, deviled ham can easily be made at home.

Just like any pickle, dill pickles are simply cucumbers that have been pickled in brine, vinegar, or another pickling solution and left to ferment.

Dill pickles in particular are seasoned with dill, hence their name and unique taste. Believe it or not, pickles have formed part of peoples’ diets for thousands of years, with accounts of production and consumption dating all the way back to ancient Egypt.

Duck is prepared in a variety of cuisines around the world and is a food that is very rich in cholesterol, fat, protein, and iron.

The most commonly consumed duck meat comes from the legs and the breast of the duck and can be prepared in a variety of ways, including roasting and grilling.

Some of the most popular dishes include the French duck confit, duck à l’orange, and foie gras; and the Chinese Peking duck.

There are so many different types of dumpling in the world, as practically each cuisine has their own version. The term refers to small pieces of dough either wrapped around a filling or without filling, and dumpling dough can be made with flour, potatoes, or bread.

This style of mustard originated in Dijon, France, which is where it gets its name, and is characterized by its pale yellow color and creamy texture.

Dijon mustard is made from spicy brown and black mustard seeds and verjuice, the juice from young grapes. The latter ingredient gives the mustard its unique tangy, sharp, and strong flavor.

Dijon mustard can be used in place of regular mustard, but just keep in mind that it will be a bit more potent.

The dill plant produces both dill weed, an herb, and dill seed, a spice. Dill is related to celery and parsley and offers a fresh and slightly sweet flavor that slightly resembles anise.

This condiment popular in American Chinese cuisine is a sweet and sour sauce that is reminiscent of a thin jelly. It is commonly made with plums, pineapples, apricots, or peaches mixed with sugar, vinegar, ginger, and chilli peppers.

It is usually served as a dipping sauce for wonton strips, egg rolls, spring rolls, or noodles with some sort of meat, fish, or vegetable.

This specific type of pizza is native to Chicago, U.S.A. and is characterized by its thick crust and unique ingredient order.

While most pizzas traditionally layer the ingredients in the order of crust, then sauce, then cheese, then toppings, deep dish pizza is inverted.

The crust is first covered with cheese, then toppings, and is finally covered by the sauce, making it the final layer of a deep dish pizza.

Sometimes referred to as stuffed eggs, dressed eggs, or Russian eggs, deviled eggs are hard boiled eggs that have been sliced in half and stuffed with a mixture of cooked egg yolk and a variety of ingredients, usually including mayonnaise and mustard.

Dim sum refers to a series of Cantonese small plates that is closely associated with the culinary culture of Hong Kong and Guangdong province.

A tradition that originated with Silk Road travellers hundreds of years ago, dim sum can now be enjoyed at most modern Chinese restaurants. The meal centers around tea, which is accompanied by steamed buns, fried dumplings, rice noodle rolls, and some type of dessert.

Dolmas, also referred to as grape leaves, are a type of Middle Eastern and Central Asian dish that consists of wrapping a vegetable or leaf around a filling.

Perhaps the most well known dolma is made by wrapping grape leaves around rice, meat, herbs, and spices. Variations on dolma can include vegetables, dried fruit and nuts like pistachios and raisins, and even seafood.

The word “dolma” comes from the Turkish verb dolmak, which means “to fill”.

Doner kebab is a Turkish dish similar to gyros or shawarma, and consists of shaving seasoned meat from a vertical rotisserie.

The meat is typically sourced from lamb, but can also include beef, veal, and chicken. Doner kebab is most commonly served inside a pita or flatbread with other fillings like lettuce, tomato, other vegetables, and sauces.

Though doner kebabs originated in the Ottoman Empire, they have grown increasingly popular in European countries thanks to the influx of Turkish immigrants.

This pastry is a traditionally Austrian (Viennese) baked good that has become a staple in Denmark, hence the name. It is made by layering yeast leavened dough with butter, baking, and filling with cream, jam, or chocolate.

When Danish immigrants migrated to the United States and throughout Europe, they brought this irresistible pastry with them, which is how the Danish has gained such international fame.

They are often topped with sugar glaze, nuts, or sprinkles, making them a decadent treat.

In the most basic sense, dark chocolate is chocolate that has no added milk solids. The cocoa content of dark chocolate can range from around 30% up to 100%, and the higher the percentage of cocoa solids, the more bitter the taste.

Dark chocolate is made with cocoa solids, cocoa butter, sugar, and vanilla essence. This ancient food has been around for about 3,000 years, as it was used by the Mayan and Aztec civilizations in beverage form for ceremonial and medicinal purposes.

This chocolate layer cake can be contrasted with the white or yellow angel food cake.

This gives it its strong chocolatey taste. It is also fluffier and darker than other chocolate cakes thanks to the addition of extra baking soda.

Contemporarily thought of as an American food, donuts actually originated in ancient times and have a long history in the Middle East and Europe.

The first versions of donuts, which were essentially fried strips of pastry dough, date back to the ancient Greeks and Romans. Arabs adopted the pastry in Medieval times, after which they spread through Europe, namely England, Germany, and the Netherlands.

It was Dutch immigrants who were responsible for bringing them to the United States.

Donuts consist of a fried dough formed into a circle with a hole in the middle, and they are often glazed or topped with chocolate, sprinkles, or sugar.

This Latin American custard is prepared by heating a mixture of milk, sugar, and vanilla essence over a low flame so that it caramelizes and thickens.

In certain South American countries, it is typical to eat it on toast, pancakes, crepes, or waffles for breakfast. However, dulce de leche can be used in countless dessert recipes, some of the most popular being dulce de leche cake and churros.

A daiquiri is a type of cocktail made with rum, some citrus juice, and sugar or another type of sweetener. It is one of the most classic cocktails that you can find, and can be served either straight up (with no ice), on the rocks (with ice cubes), or frozen (blended with ice).

Perhaps the most popular variation of a daiquiri is the strawberry daiquiri, which is made by blending strawberries and lime juice with the other daiquiri ingredients.

Darjeeling is an Indian tea variety made from the tea plant Camellia sinensis. It comes in black, green, white, and oolong tea varieties, all of which are light-colored teas with floral aromas.

Darjeeling tea is rich in antioxidants and has been shown to reduce stress, as it helps to regulate the production of cortisol, the stress hormone, in the body.

Decaf coffee is a great alternative for those looking to limit their caffeine intake.

The process of decaffeinating coffee, which was invented at the beginning of the 20th century, implies soaking still green coffee beans in hot water and adding a solvent or activated carbon to extract the caffeine.

Another method requires steaming the beans then rinsing them with solvents to dissolve the caffeine from the beans. Though highly effective, it is not possible to fully decaffeinate coffee beans, and a cup of decaf coffee can have up to 7 mg of caffeine (which is still only 5%-10% of what a normal cup of coffee has).