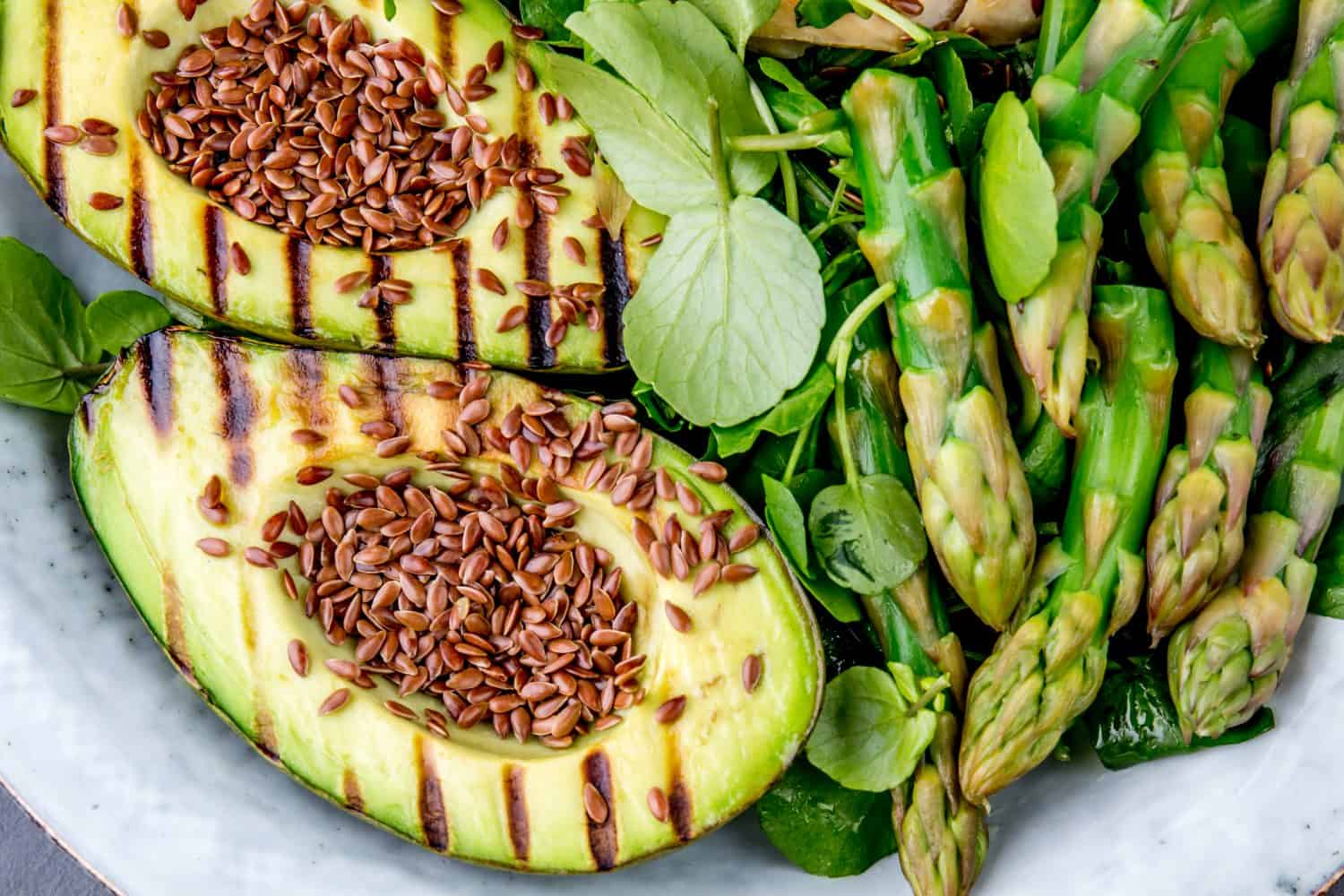 Trying to figure out foods that begin with A? You’re in luck.

From hearty main courses to mouth-watering desserts, this article contains 27 foods beginning with A. Let’s get started! 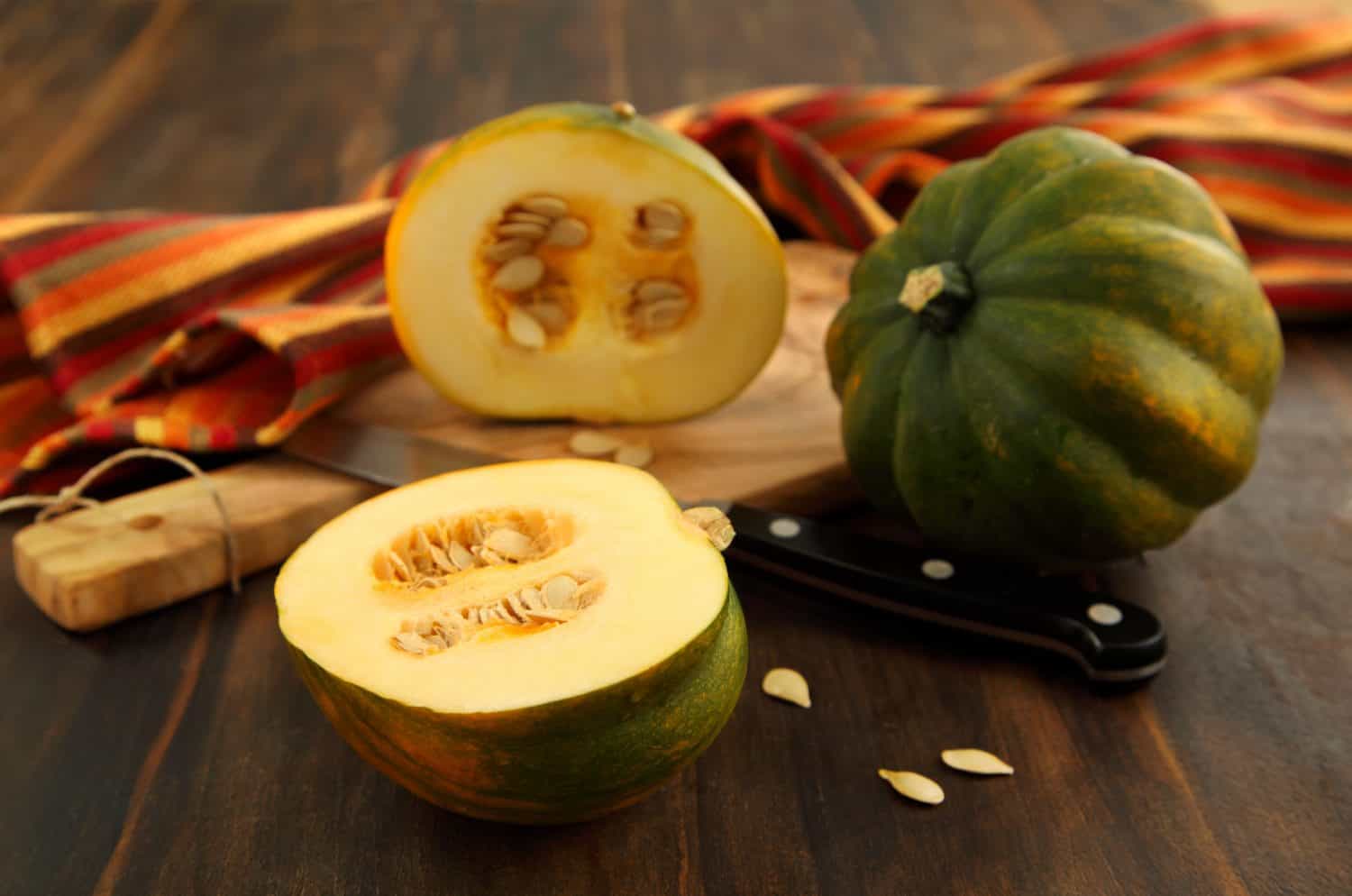 Acorn squash is a winter squash with a sweet yellow-orange flesh. It is most delicious when roasted, which brings out its natural sweetness, and goes well in a number of fall-inspired dishes. 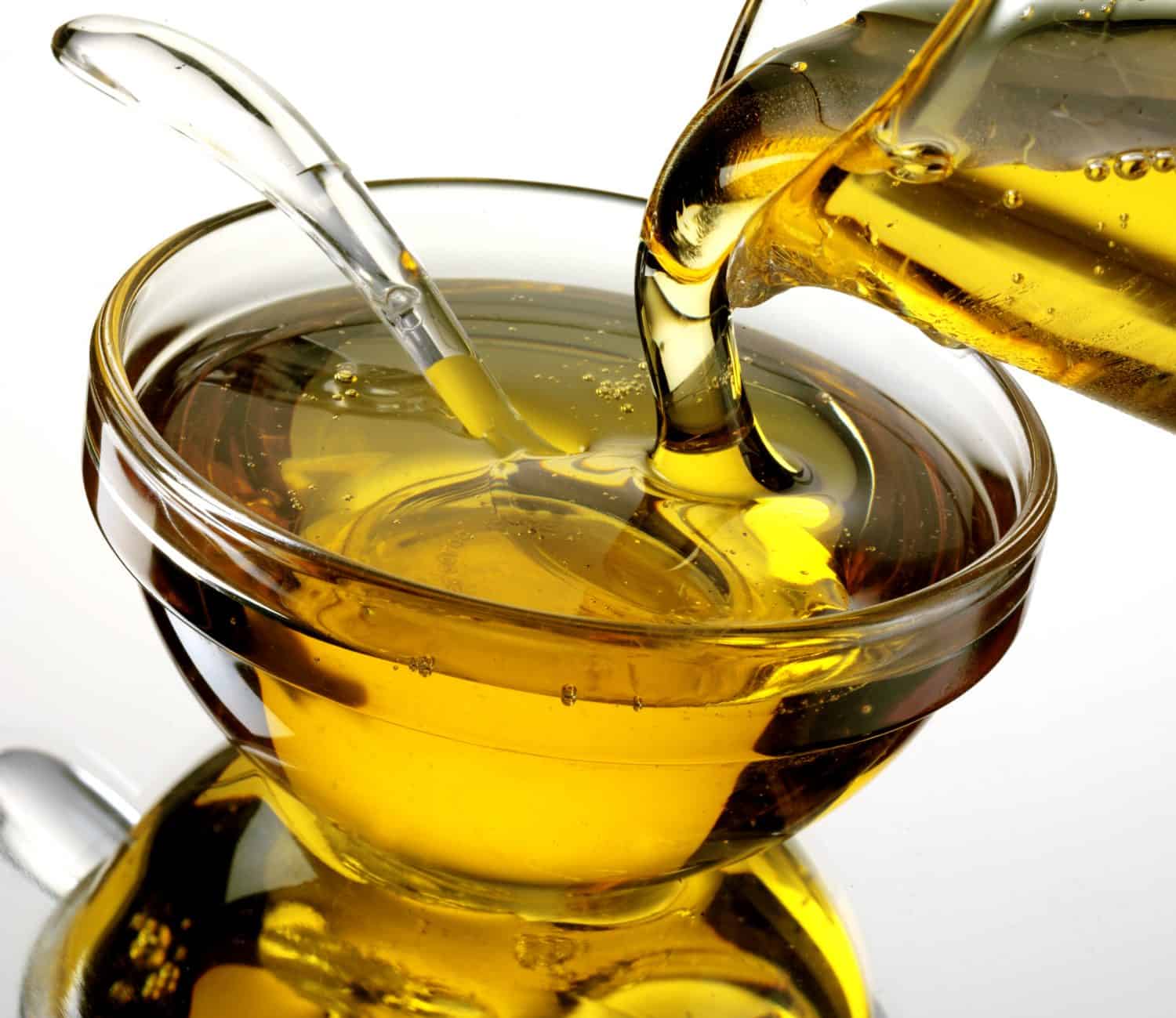 As you can probably guess, this sweetener comes from the fluid that is inside the blue agave plant. The agave plant is native to Mexico and has various uses and is crucial in the production of tequila.

Agave nectar is a natural sweetener that can be used in place of honey, sugar, or maple syrup. However, it has a higher fructose content than any other common sweetener, so it is not recommended for those who suffer from type 2 diabetes. 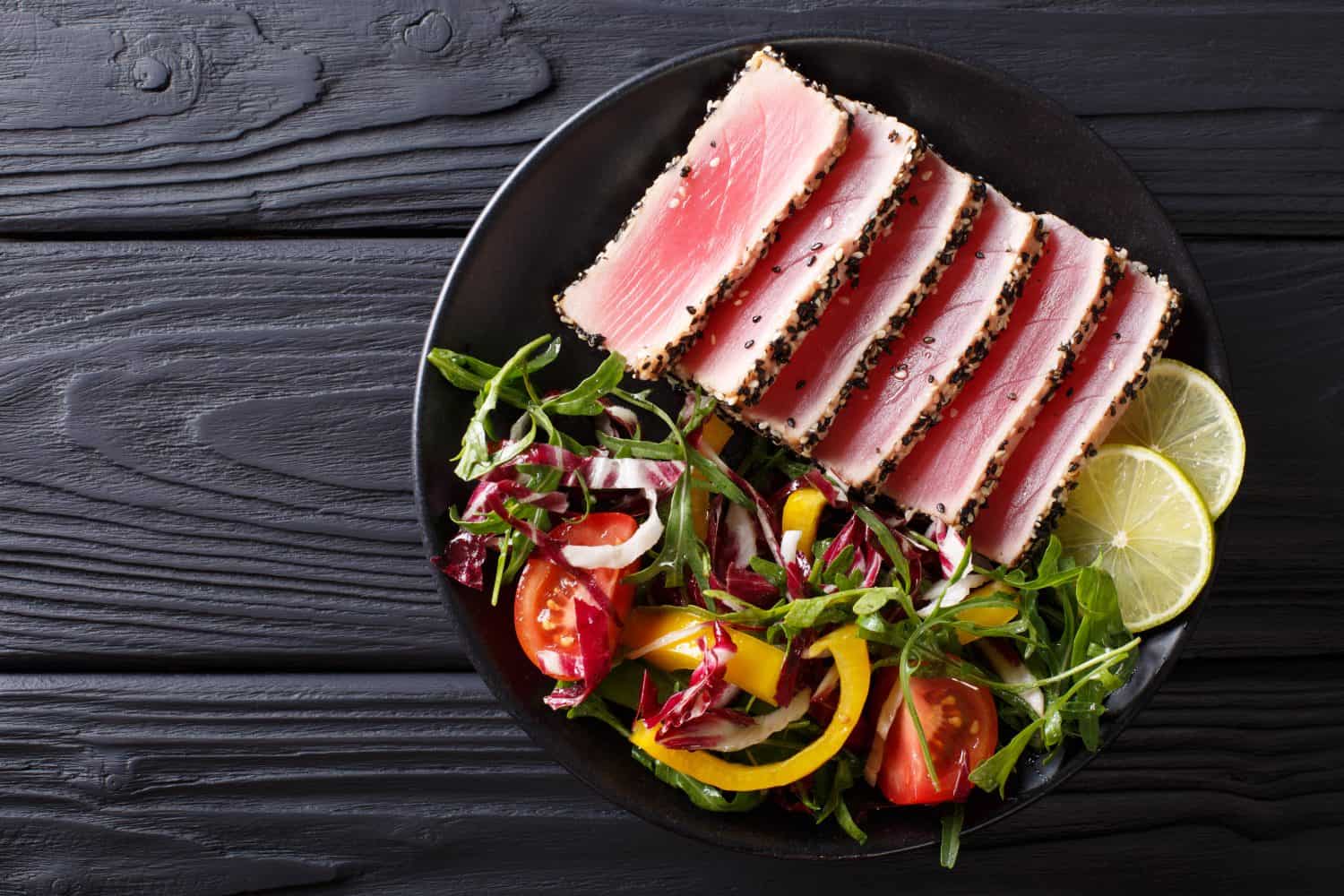 Also known as yellowfin tuna, this fish can be served raw in a salad, a poke bowl, or in tuna tartare.

Its name comes from the Hawaiian word ‘ahi, which also refers to the closely related bigeye tuna. Another common way to prepare this fish is by searing ahi tuna steaks and serving with sesame oil, soy sauce, and lime juice. 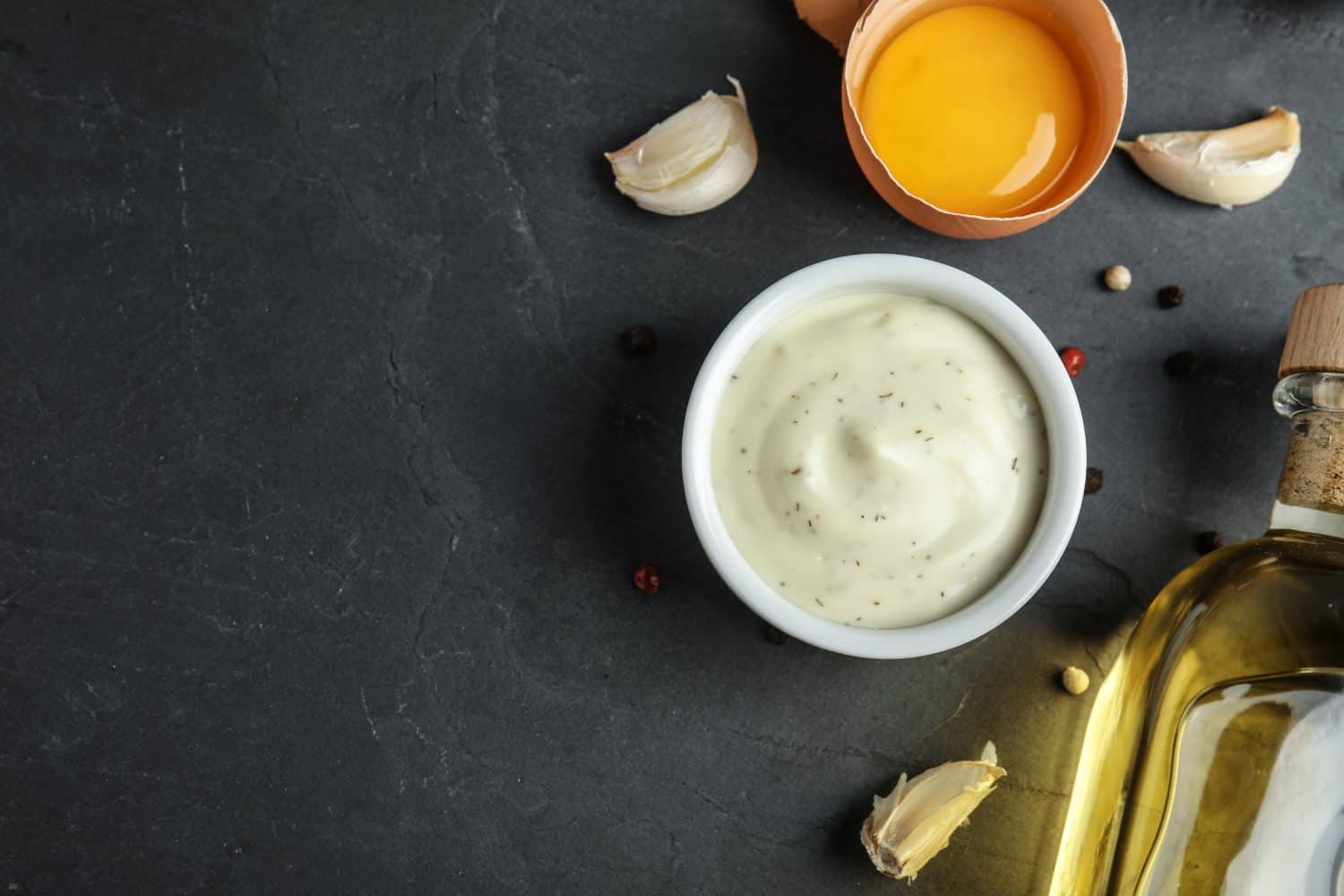 Sometimes referred to as allioli or aïoli, aioli is a Mediterranean sauce typical of Spanish, French, and Italian cuisine. It is made with emulsified raw eggs and olive oil (or mayonnaise), lemon juice, salt, and, most importantly, garlic.

In Spanish cuisine, aioli typically is used to accompany potatoes or ham croquetas, but also is delicious on a burger or in egg salad. 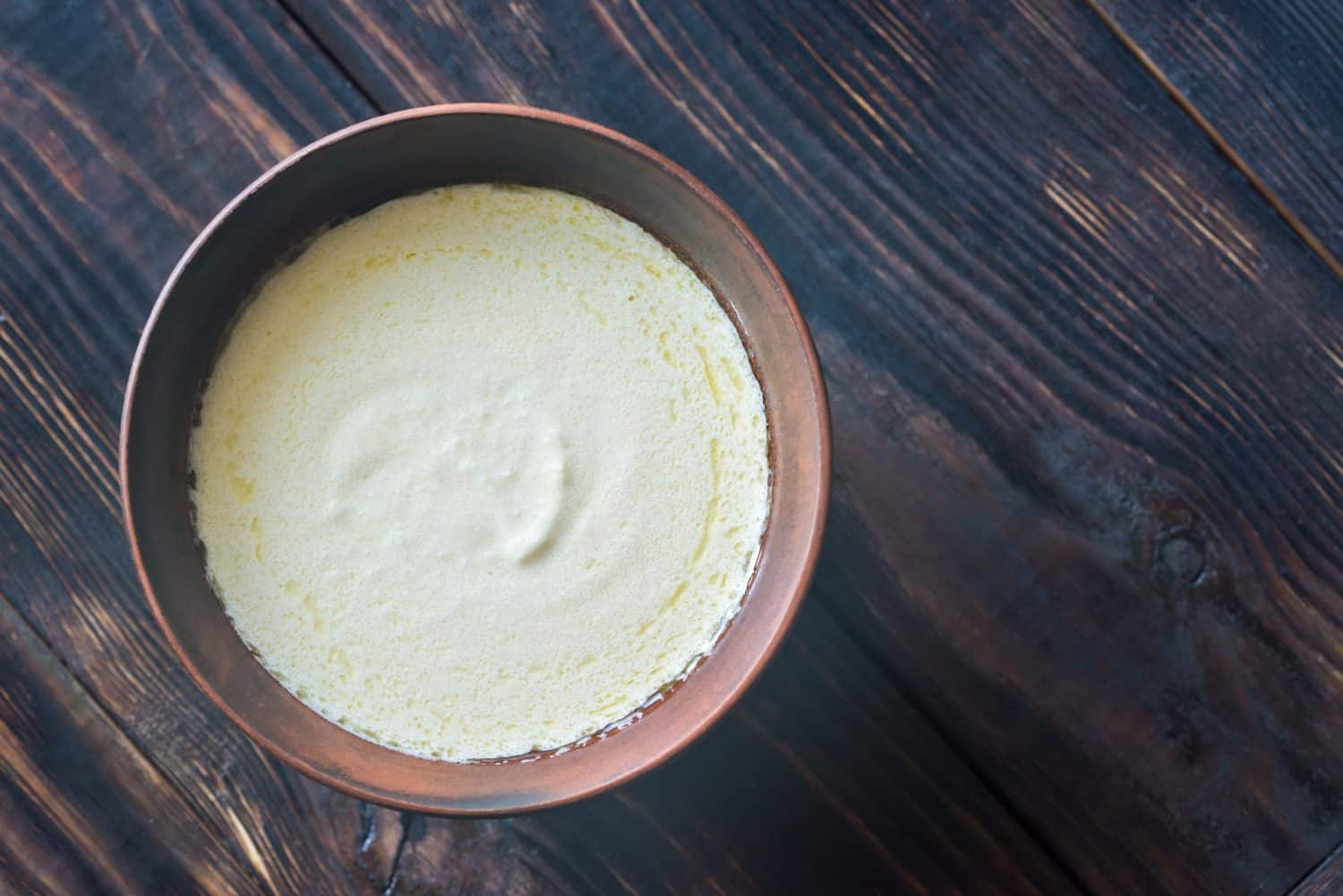 This classic creamy pasta sauce was invented in Rome at the beginning of the 20th century when restaurant owner Alfredo de Lelio prepared pasta with butter and Parmesan cheese for his pregnant wife who was suffering from morning sickness.

Over time, the sauce gained popularity in the United States and is now often made with heavy cream, butter, Parmesan cheese, and garlic and served with long fettuccine noodles. 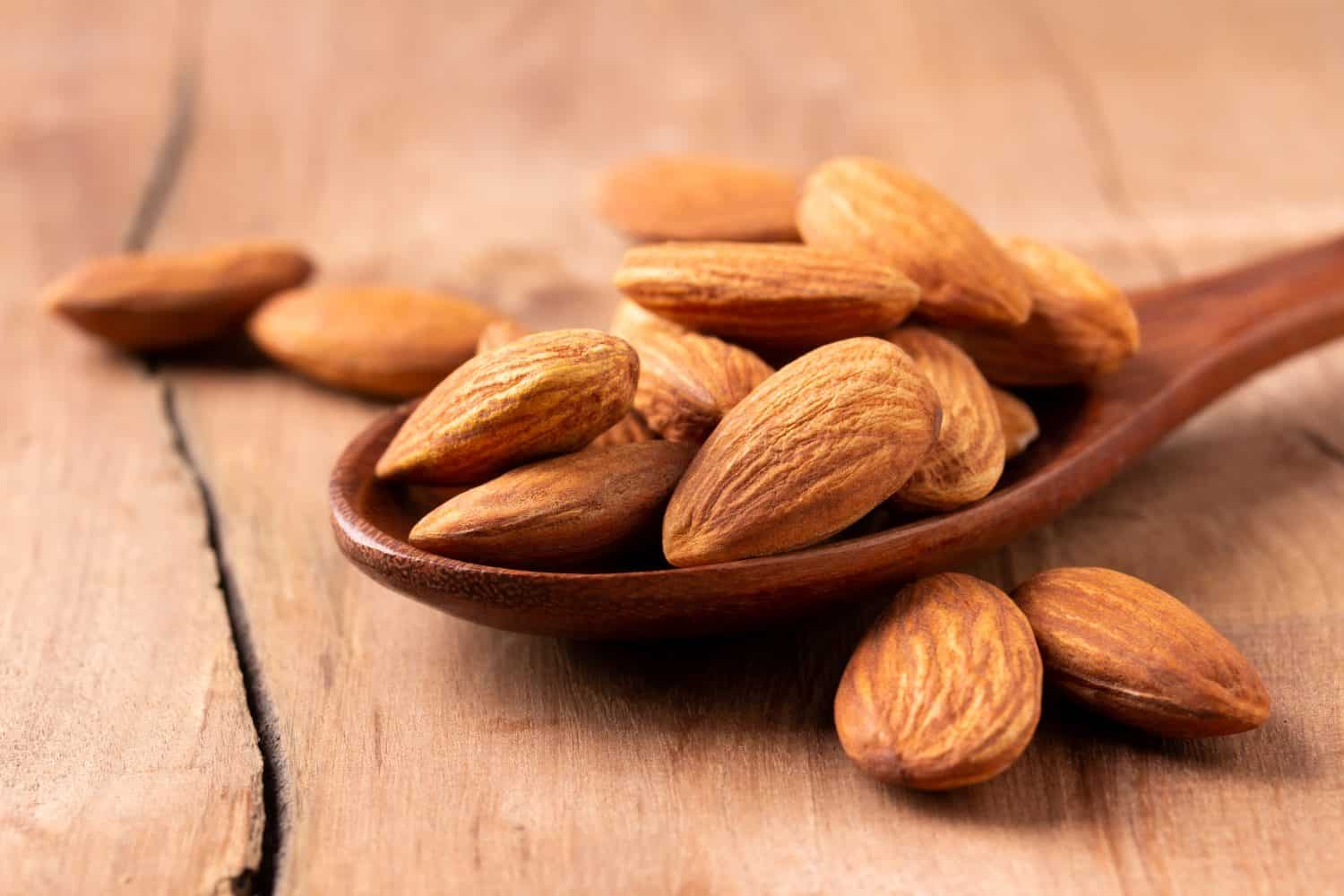 Almonds, though native to Iran, can now be found around the world. They are grown on trees and form inside of the shell of a fruit referred to as the drupe.

Almonds are an impressive source of nutrients and contain significant amounts of Vitamin E, Manganese, and Magnesium. They are also packed with plant protein, at 6 grams per 1 ounce serving.

Almonds are utilized in various world cuisines, serving as an essential element in traditional recipes like marzipan, Spanish turrón, and Italian amaretti cookies. 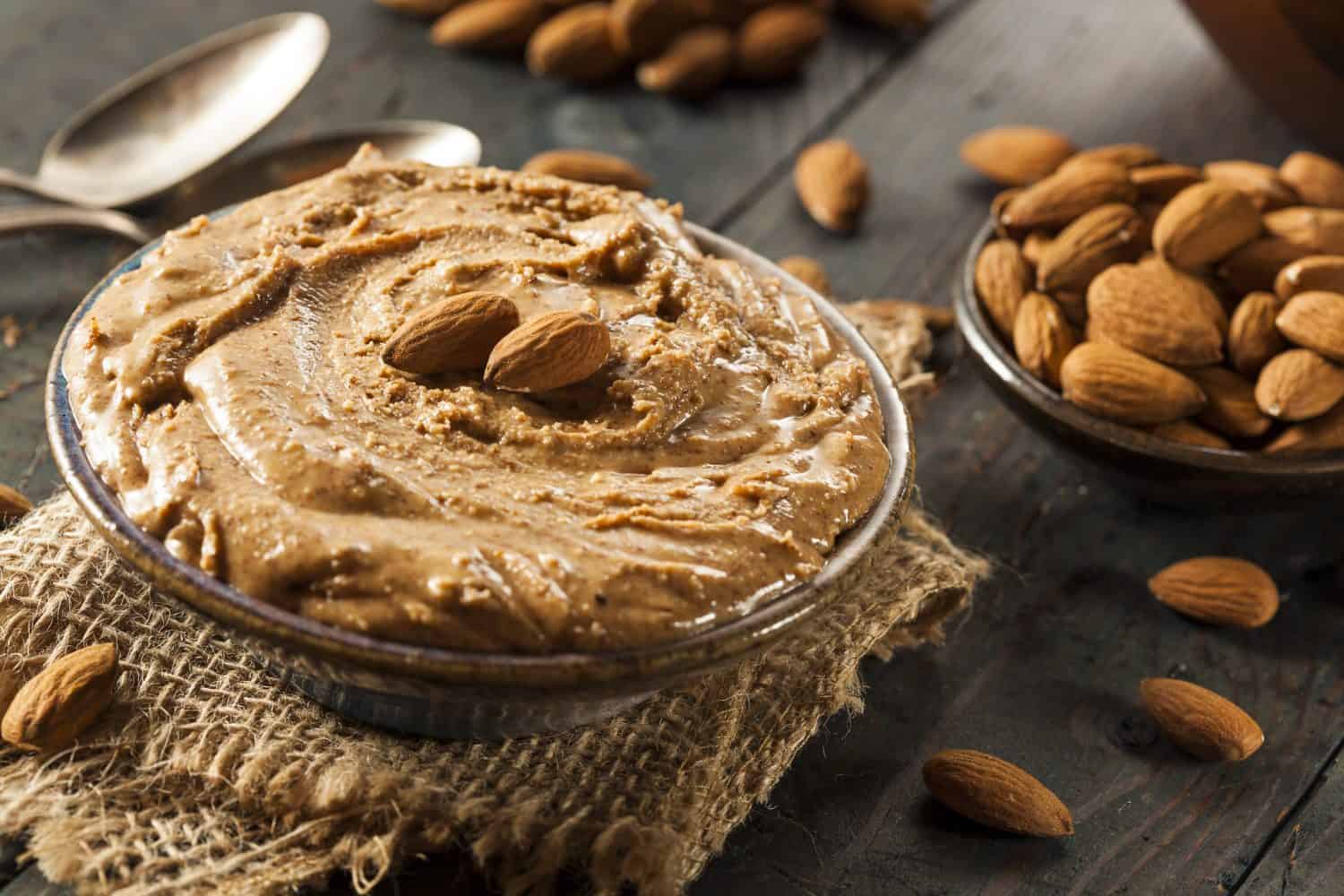 Almond butter is a tree nut butter that is made by grinding almonds into a paste. It can be made with both toasted and untoasted almonds and, much like peanut butter, comes in smooth and chunky varieties. 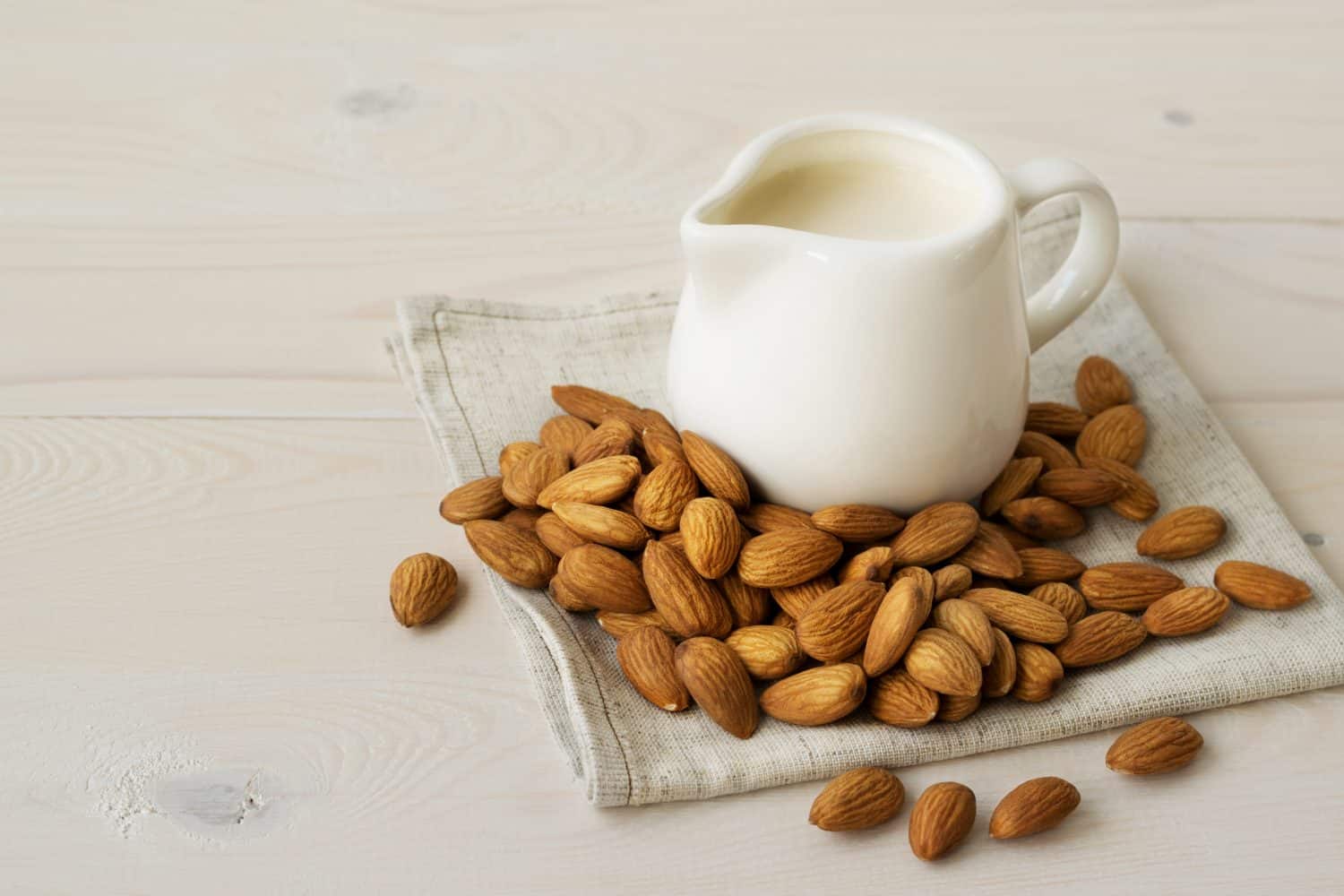 Another popular almond product, almond milk is made by soaking and grinding almonds in water and results in a creamy, nutty plant milk that is a great non-dairy alternative to cow’s milk.

Its origins can be traced back to the 13th century Middle East where it was enjoyed by Islamic communities.

You can even make almond milk at home with just almonds, water, and a blender. 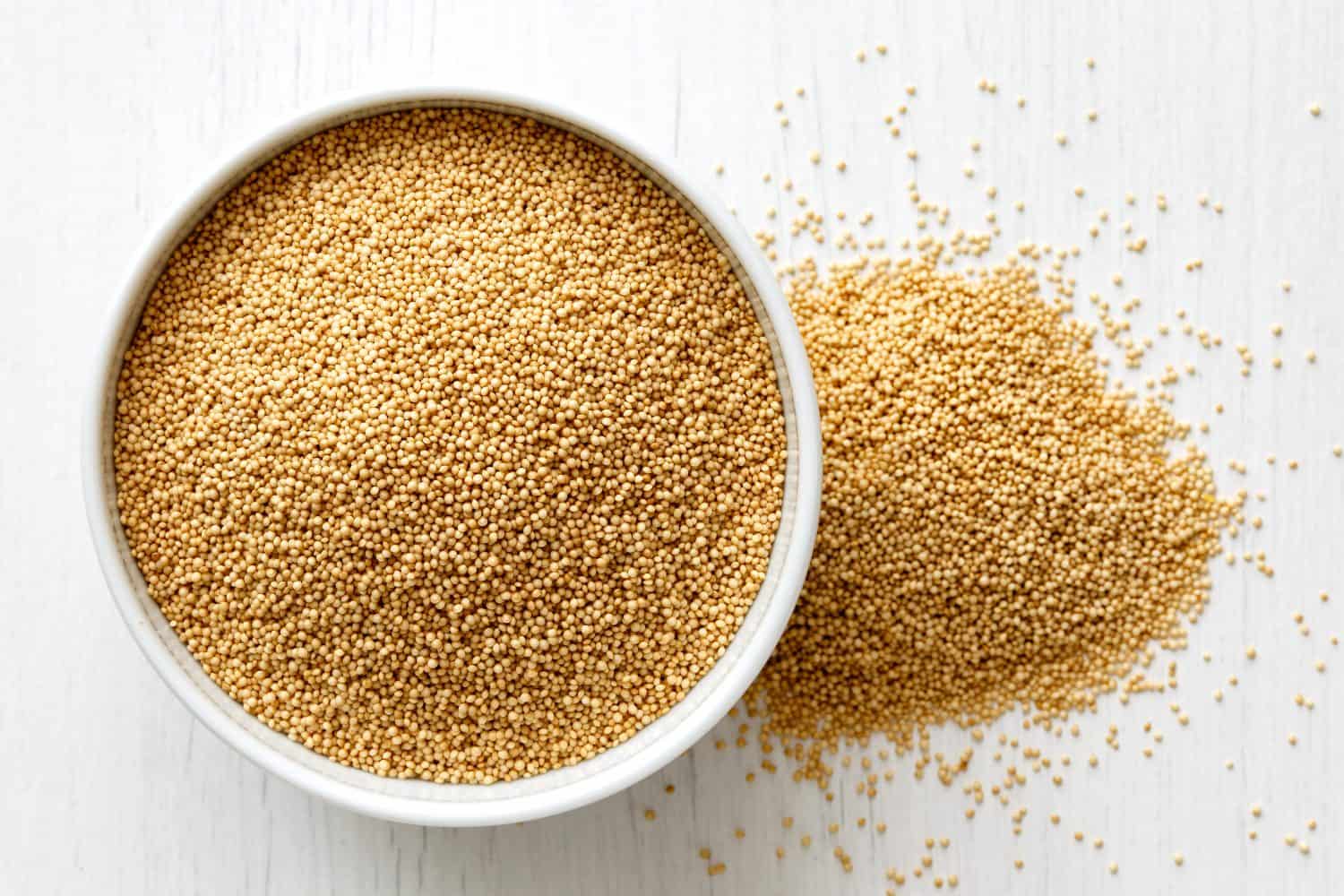 Amaranth is an ancient grain (though technically a seed) that has been cultivated for 8,000 years.

It was a staple food of the Aztec civilization and is still enjoyed today for its high levels of plant protein, as it has 14 grams per 100g serving.

It is prepared by simmering in water or broth, much like you would prepare rice or quinoa. 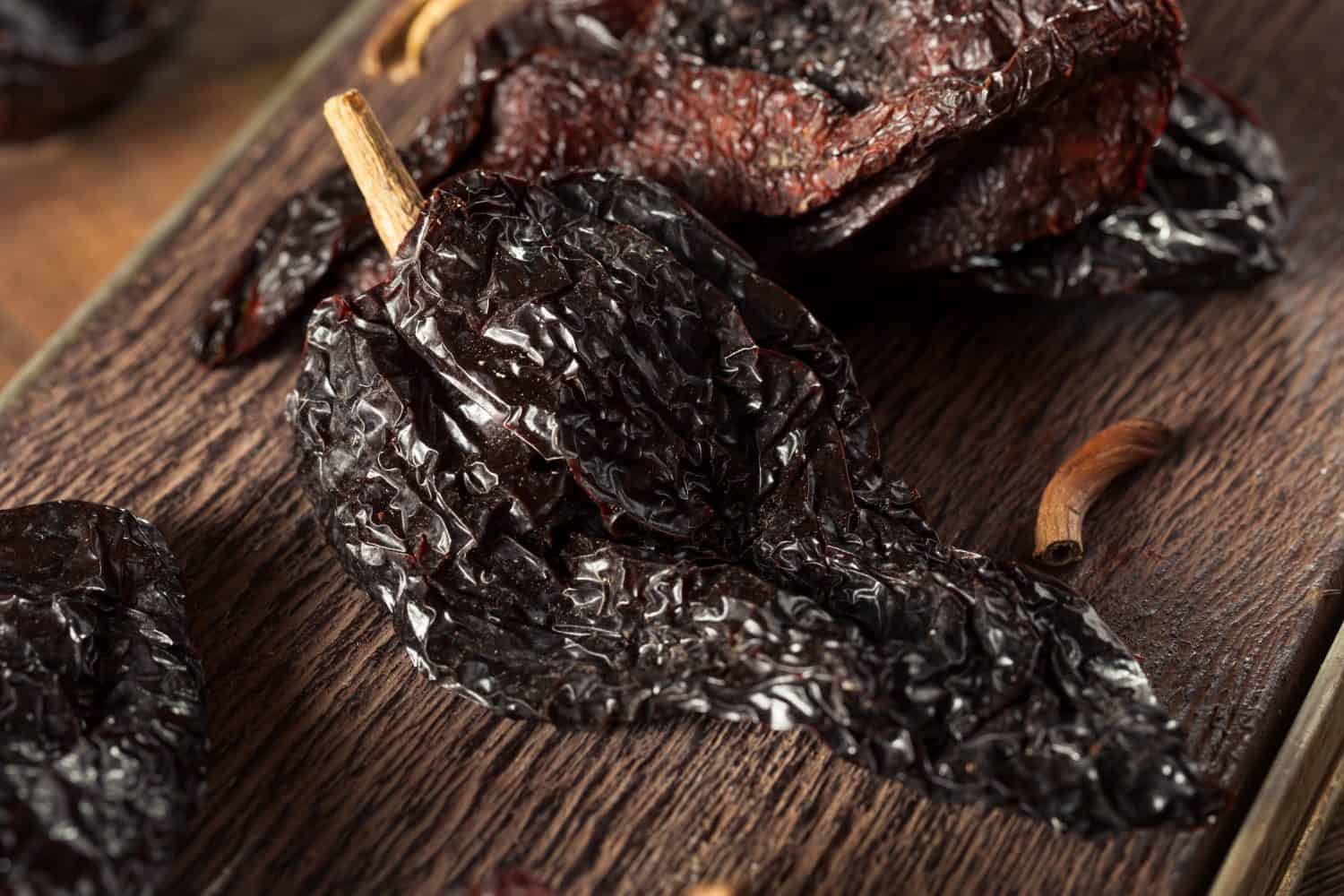 Ancho chiles are a pepper native to Puebla, Mexico.

They are made from poblano peppers that are harvested when green and left to ripen. Their name comes from the Spanish word ancho, meaning wide, as these chiles are quite large.

The ripening process turns the chiles red and gives them a touch of sweetness, and they are a very popular element in Mexican and Southwestern cuisine. 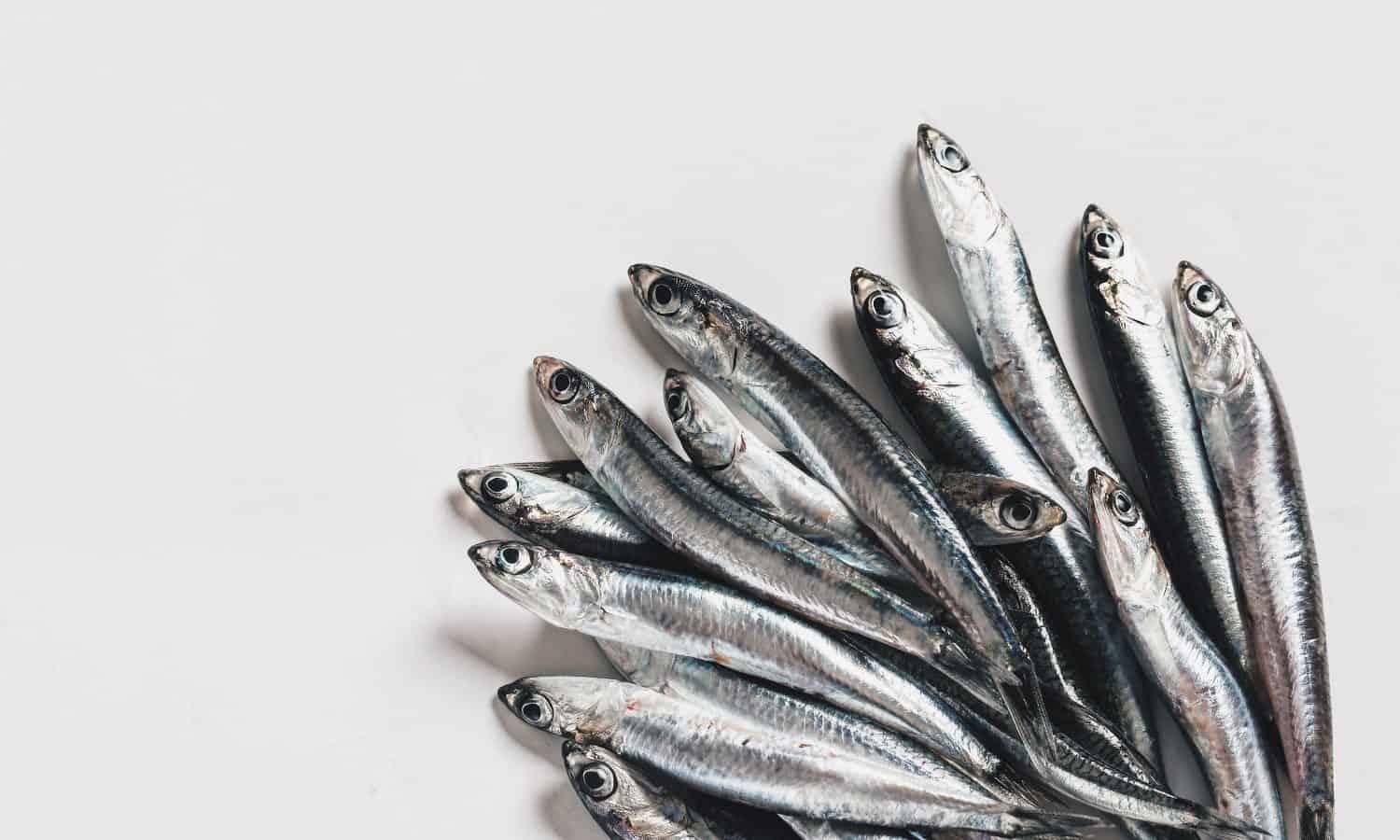 Anchovies are a small fish of the Engraulidae family that can be found both in marine and fresh waters.

They are most commonly brined with salt and then preserved in salt or oil, but can also be pickled in vinegar.

Anchovies are consumed all around the world and are an excellent source of omega-3 fatty acids and protein. 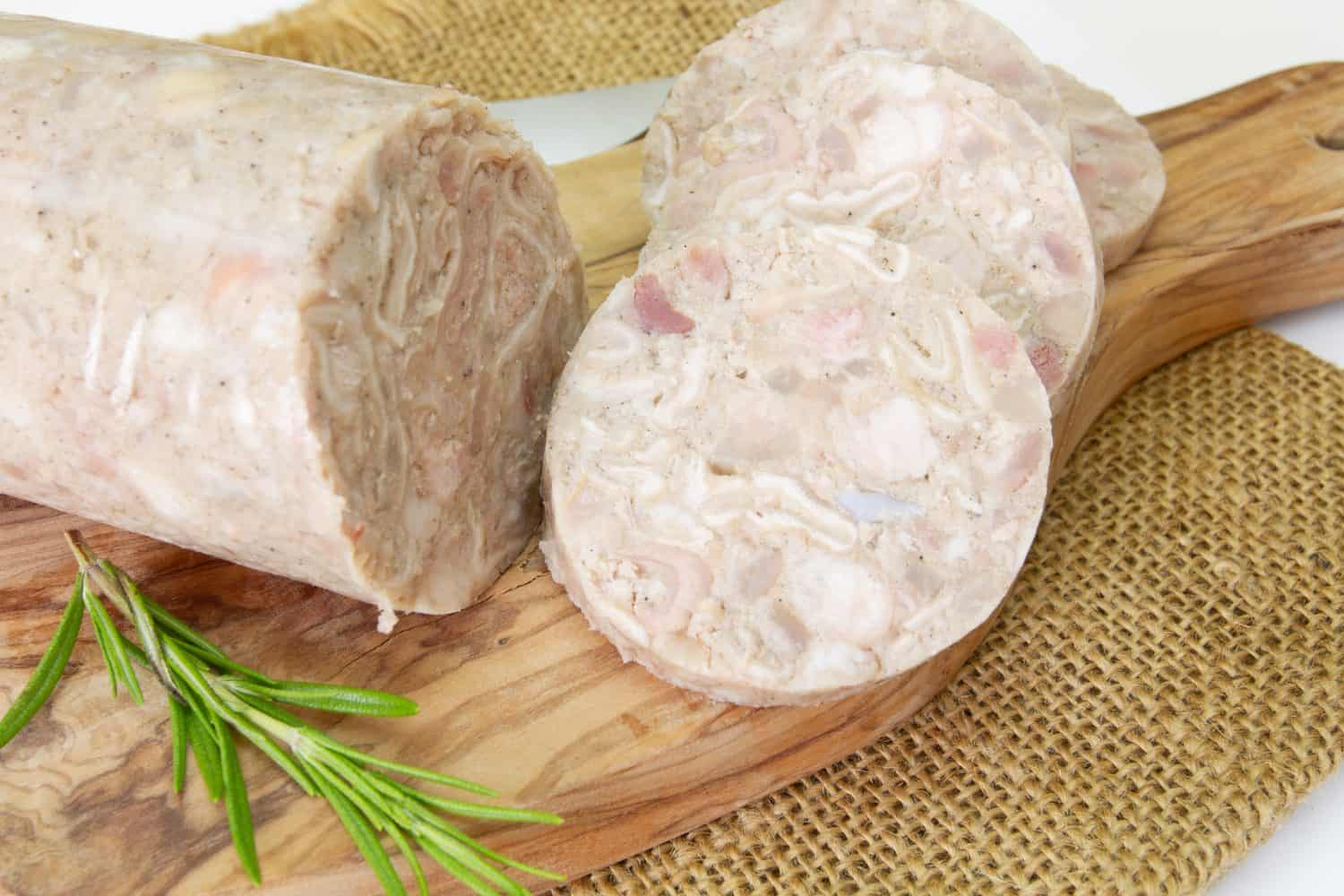 This spicy, smoked pork sausage has its origins in France and tends to have a flavor and texture that is very distinct from most other sausages.

It has a smoky and sharp taste and a chunkier texture due to the fact that it is made from chopped, not ground, pork. This sausage is essential to Cajun cuisine, as it is an important element in gumbos, jambalayas, bean, and more. 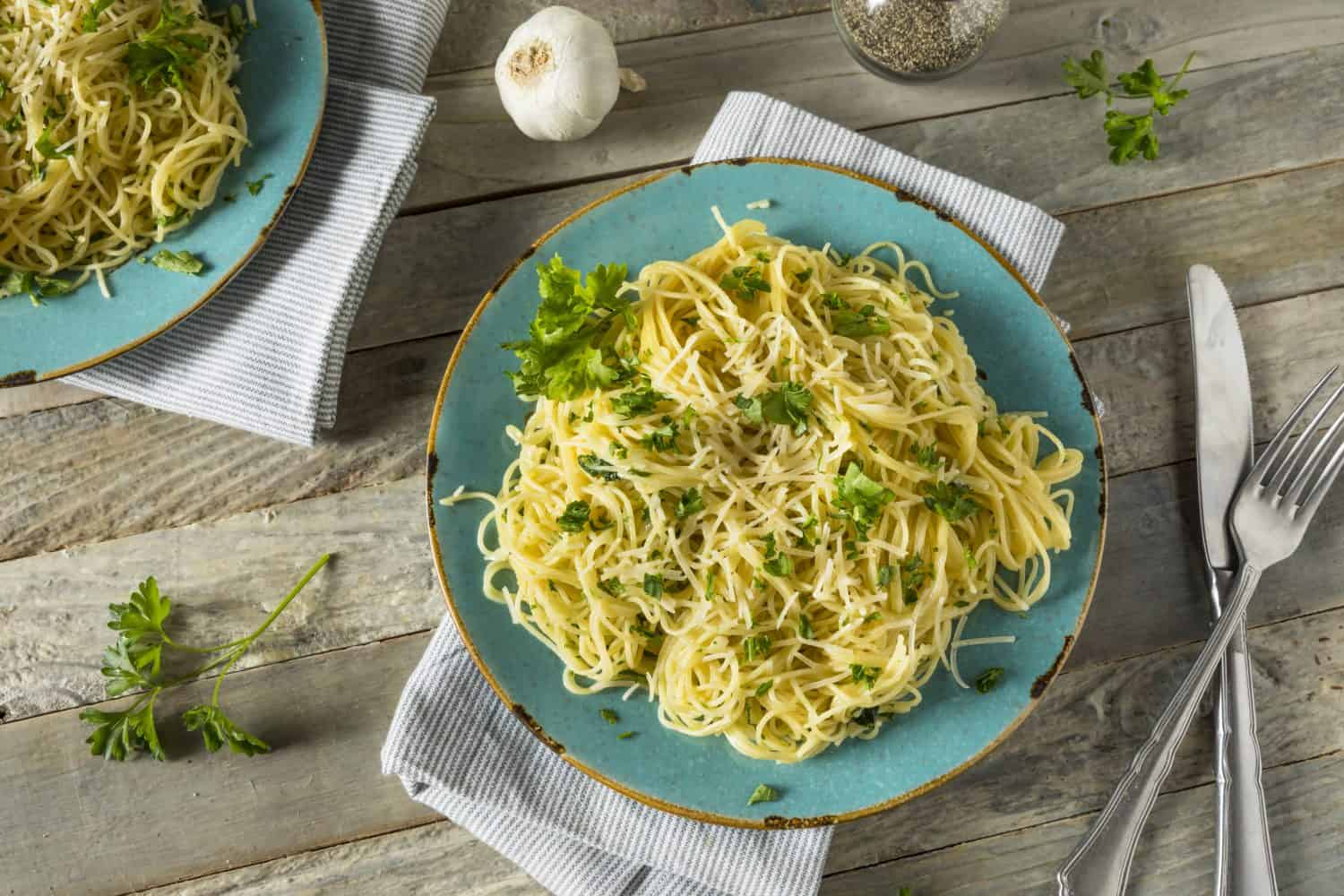 Traditionally known as capellini or capelli d’angelo, angel hair pasta is a thin Italian pasta with the same characteristic rod shape that spaghetti has.

Its origins can be traced back to 14th or 15th century northern Italy, and it usually has a diameter between .85 and .92 millimeters. It is commonly prepared with herbs, garlic, and Parmesan. 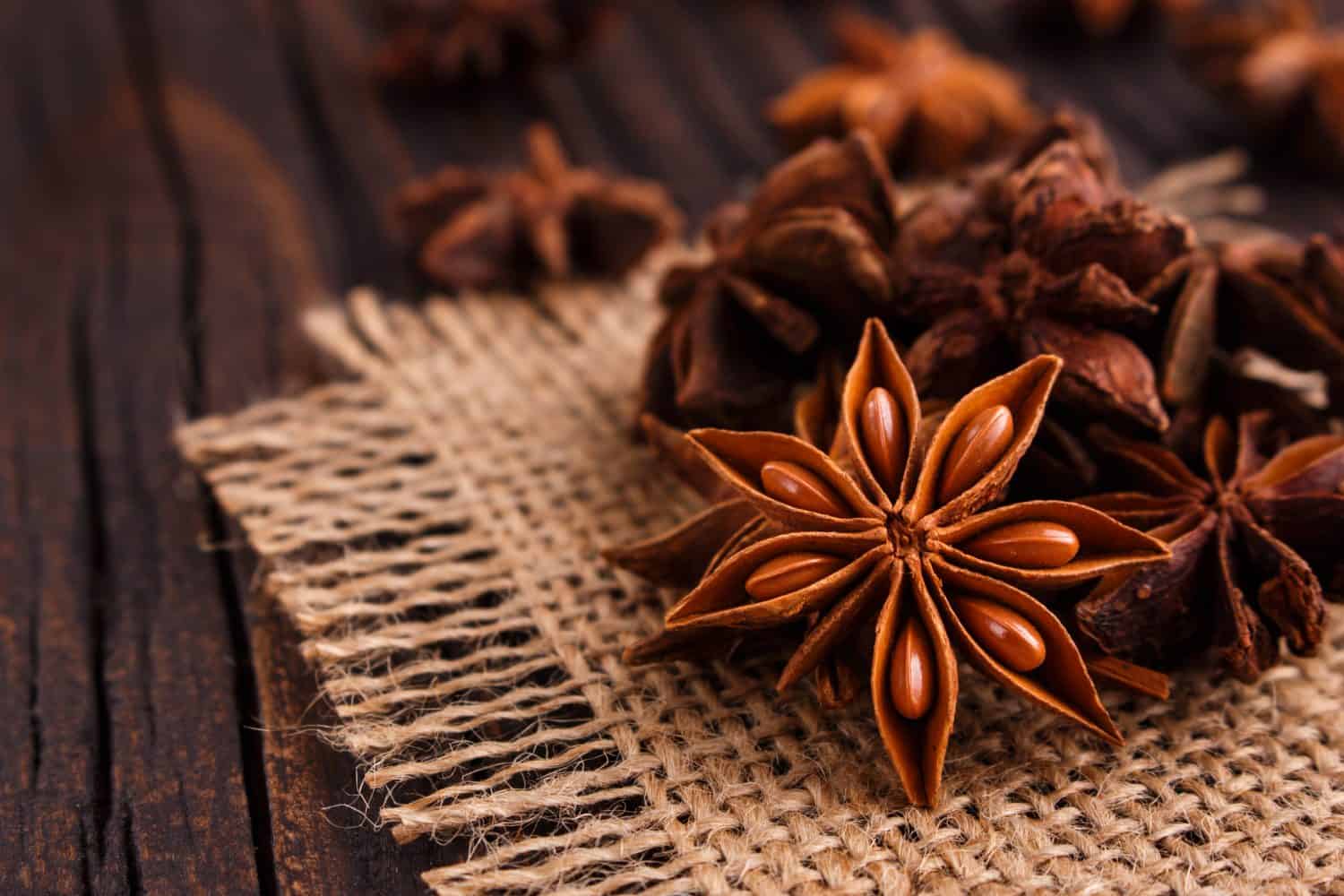 Anise, or aniseed, is a flowering plant native to the eastern Mediterranean and Southwest Asia. Its seeds have a flavor and aroma very similar to that of star anise, fennel, and licorice.

This seed is found in a variety of world cuisines, including Italian, Mexican, Indian, German, and Middle Eastern recipes. It can be used whole or ground and is commonly incorporated into dough for baked goods or ground meat before cooking.

It is also an essential element in a number of liquors, such as anisette, ouzo, sambuca, and absinthe. 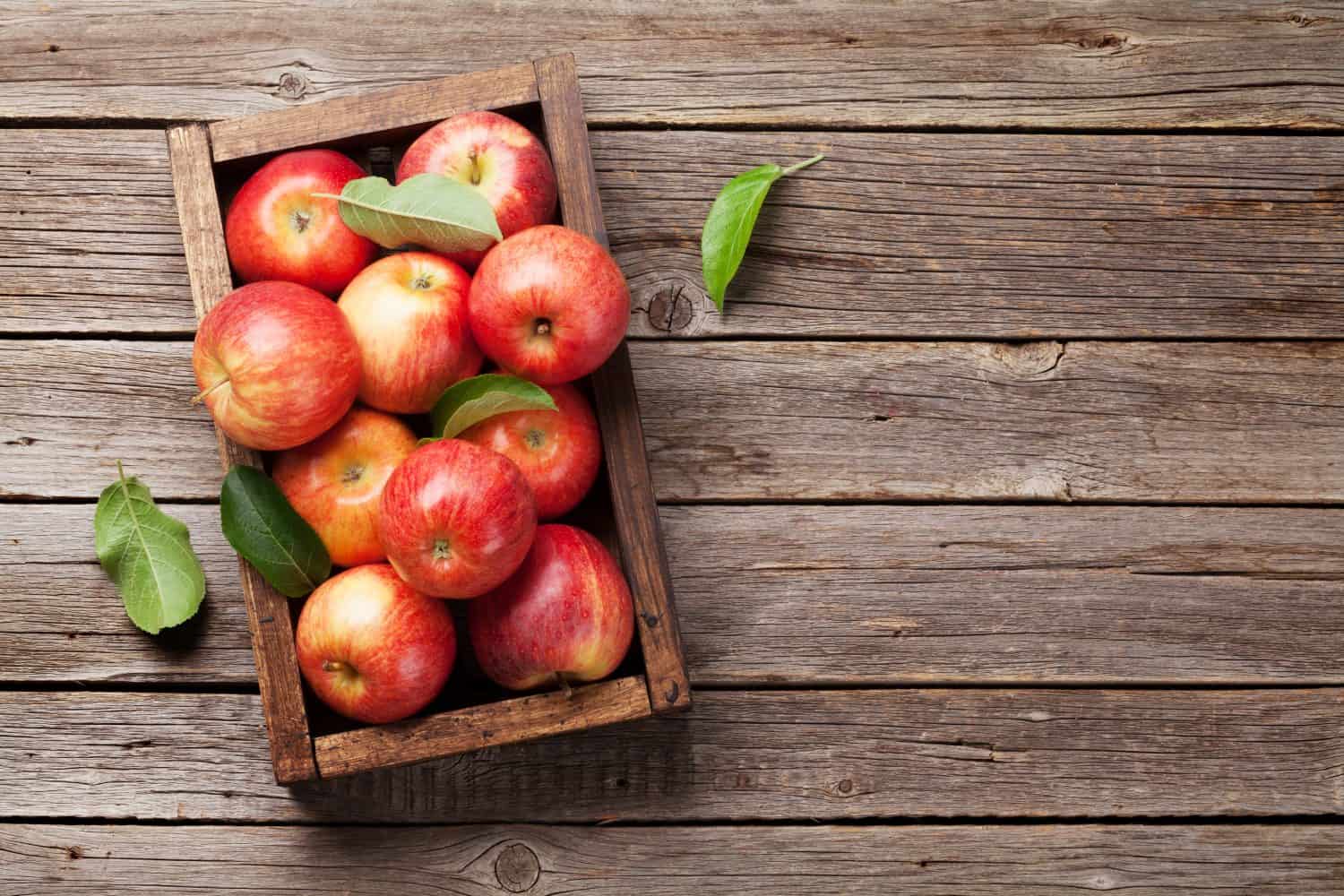 One of the most characteristic fall fruits, apples are enjoyed around the world.

There are more than 7,000 varieties of apples in the world, ranging in color, sweetness, and tartness, and the apple is in fact one of the most frequently grown tree fruits.

Some of the most common varieties of this fruit are the Red Delicious, McIntosh, Golden Delicious, Granny Smith, and Honeycrisp. Apples are an excellent source of fiber, vitamin C, and a number of antioxidants. 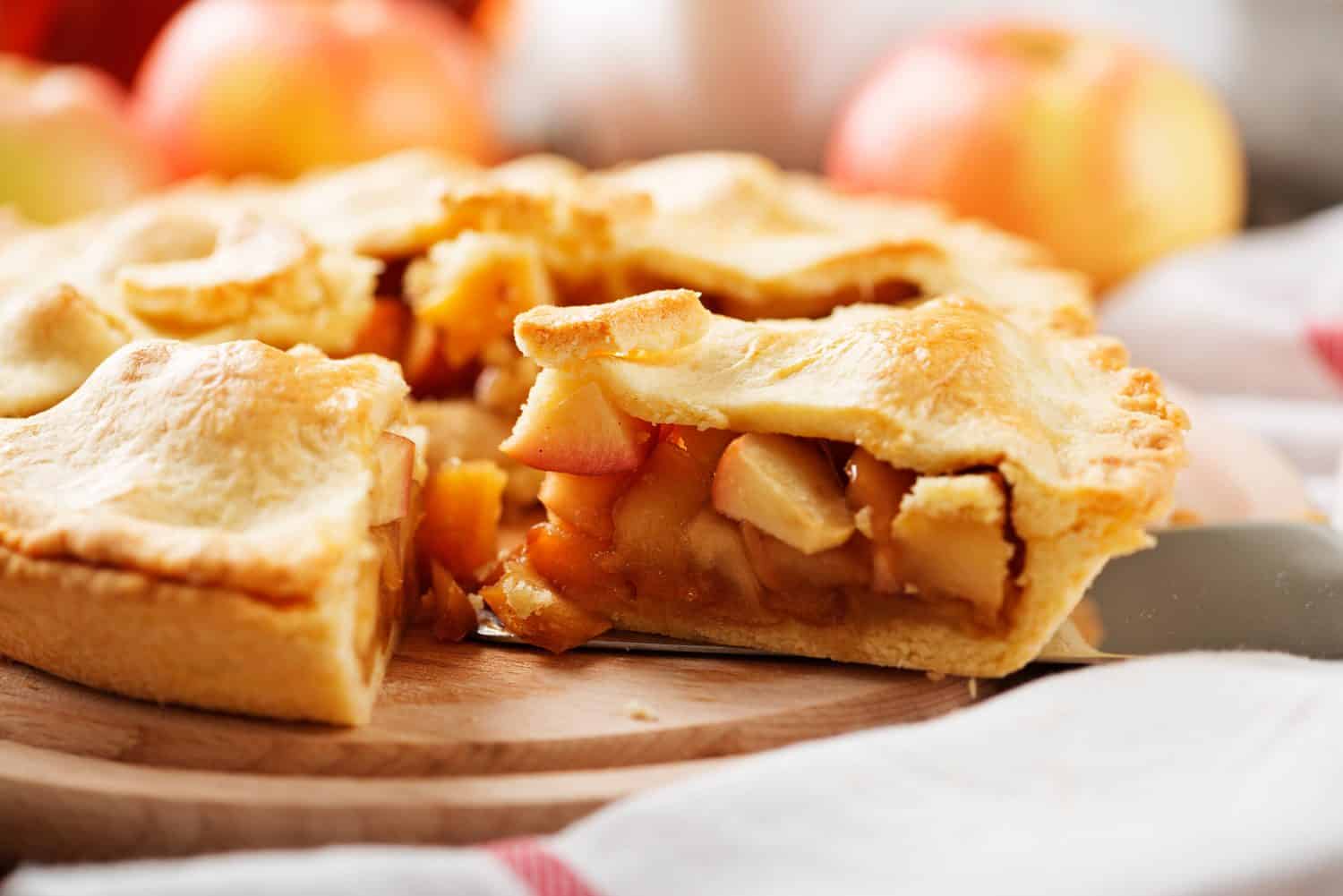 Contrary to popular belief, apple pie is not a uniquely American dessert. The first recipe for apple pie can be traced back to 14th century England, and historians have uncovered Dutch recipes for apple pie from the early 1500s.

The fall treat was thought to have been brought to America by European immigrants and has become a cultural icon for the nation, taking center stage on the dinner table in autumn months, especially on Thanksgiving.

It is prepared with a filling of tart granny smith apples and a traditional pie crust and often served warm and à la mode (with vanilla ice cream). 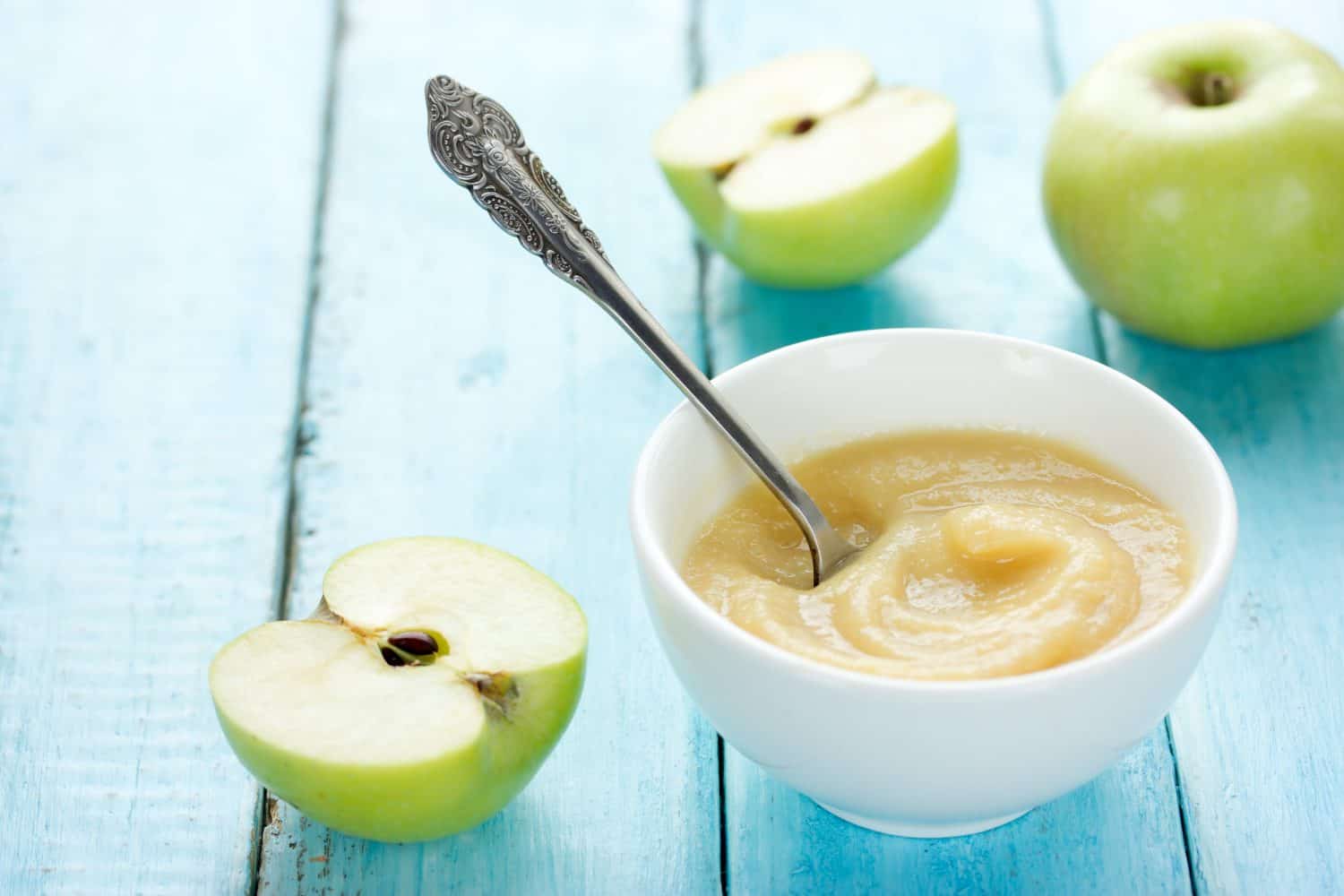 Applesauce is a popular food in North America and parts of Europe that is made by pureeing cooked peeled or unpeeled apples and can be spiced or sweetened.

Thanks to its smooth texture, it is a common first food for children. However, as is the case with most fruit juices and purees, applesauce is not as rich of a source of vitamins and nutrients as whole apples, so it should not replace your daily fruit consumption. 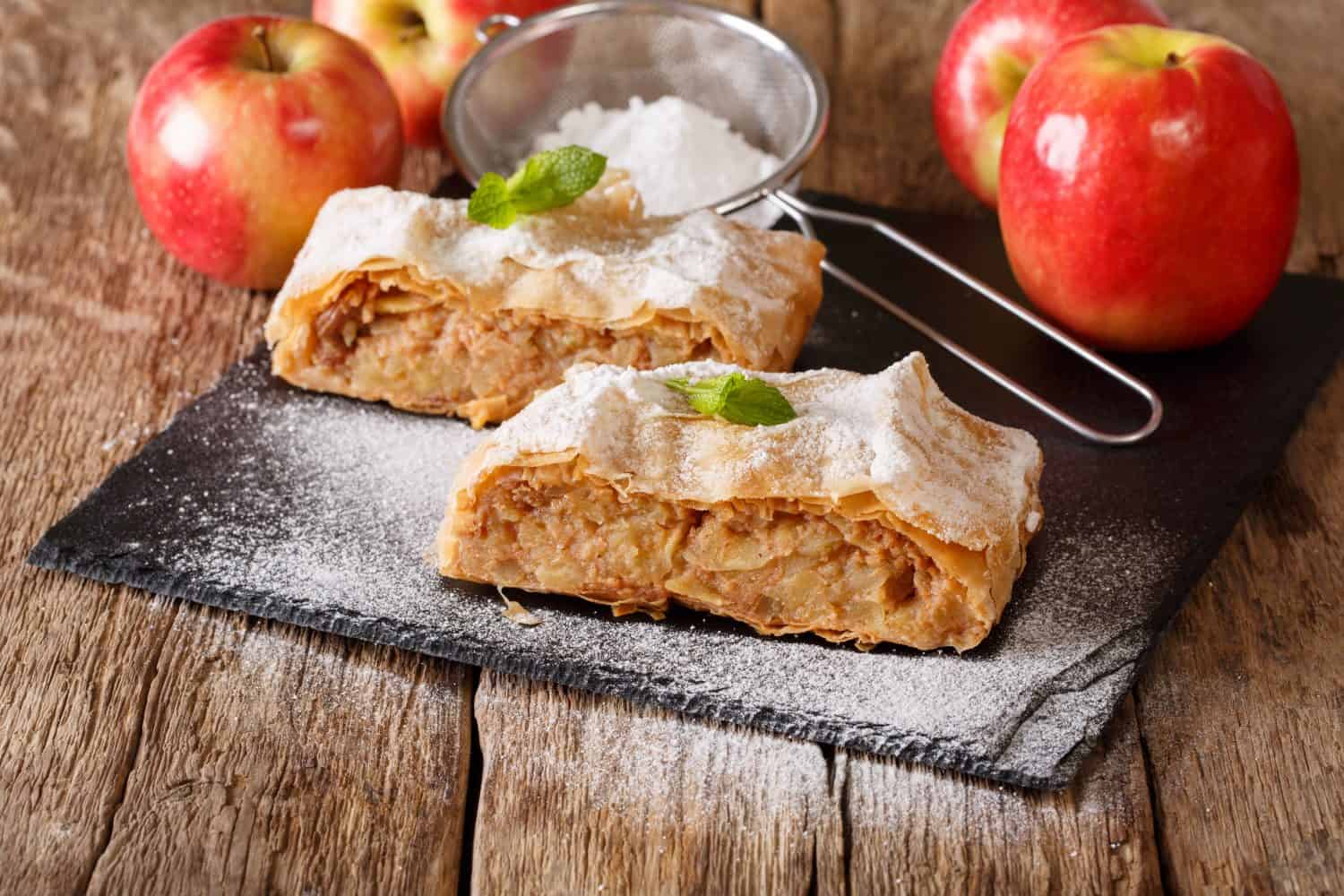 The national dish of Austria, apple strudel (Apfelstrudel in German) is a pastry typical of the Austro-Hungarian Empire.

Though it really gained its fame thanks to its popularity in the traditional coffee houses of Vienna, its influences can be traced back to the Turkish baklava that was introduced into Austria in the mid-1400s, which paved the way for apple strudel as we know it today.

This flaky pastry is best served with whipped cream or a dollop of custard and a strong espresso. 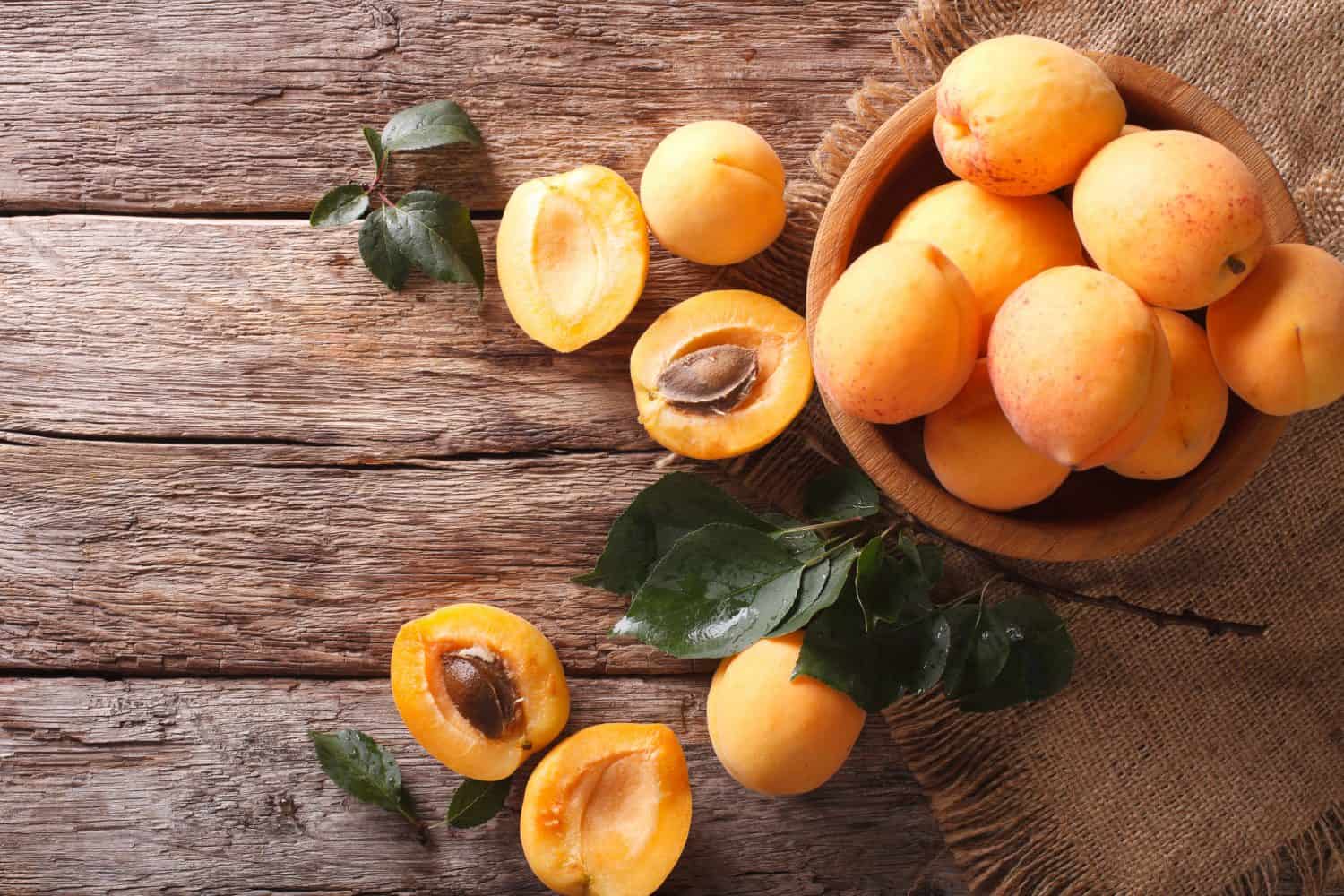 Apricots, a stone fruit sometimes referred to as Armenien plums, are a summer fruit that look like a small peach but offer a more tart flavor. They are incredibly low in calories and are an excellent source of antioxidants, like beta carotene and vitamins A, C, and E.

They can be eaten raw, dried, in jam, or baked into an apricot crumble or pie. 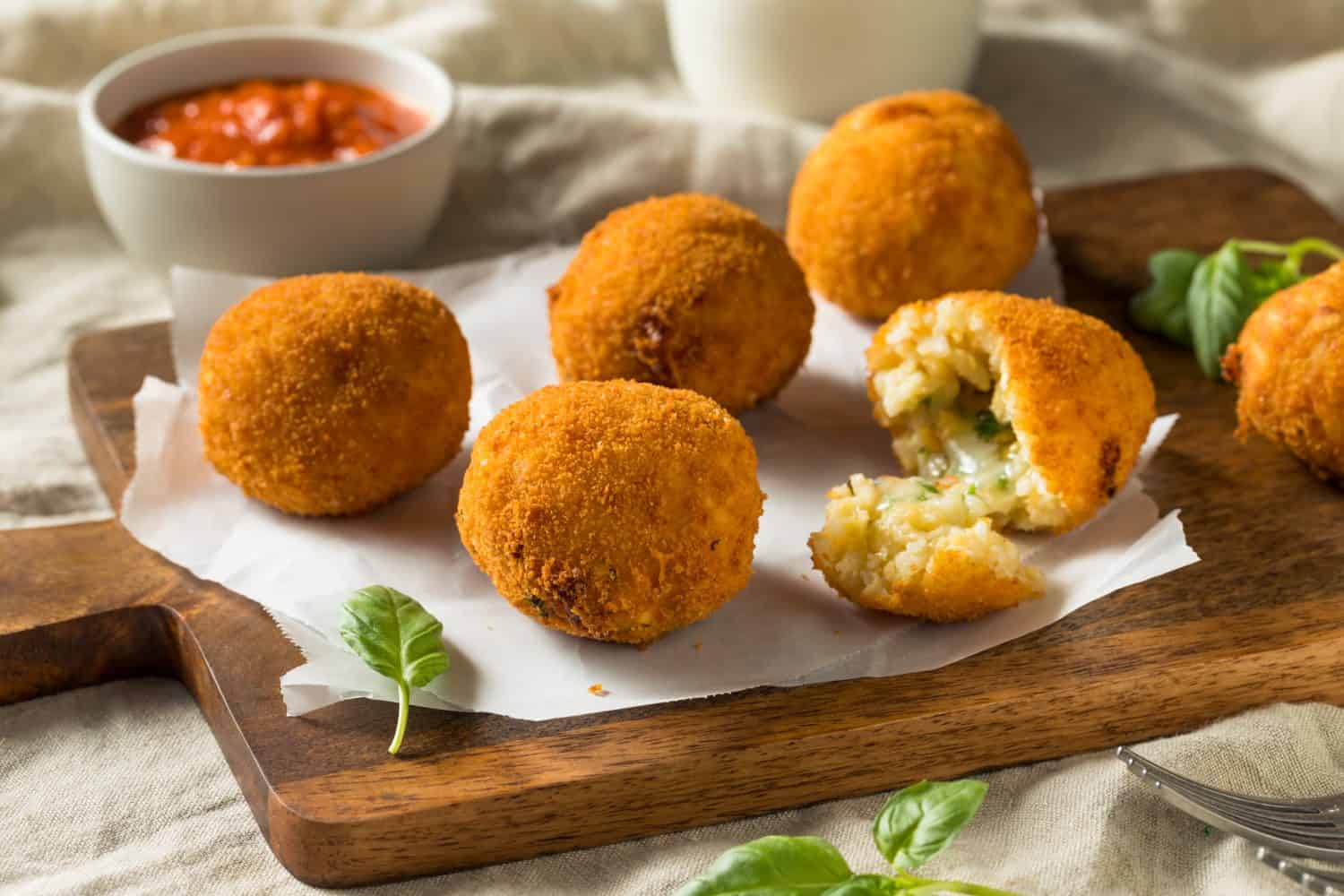 These fried rice balls are a traditional Italian snack that originated on the island of Sicily. This ancient recipe is thought to have been invented in the 10th century when the Sicilian region was under Arab rule.

They are made by forming balls of rice which are then coated in breadcrumbs and deep fried. Arancini can be made with a variety of ingredients, like meats, cheeses, vegetables, and even seafood. 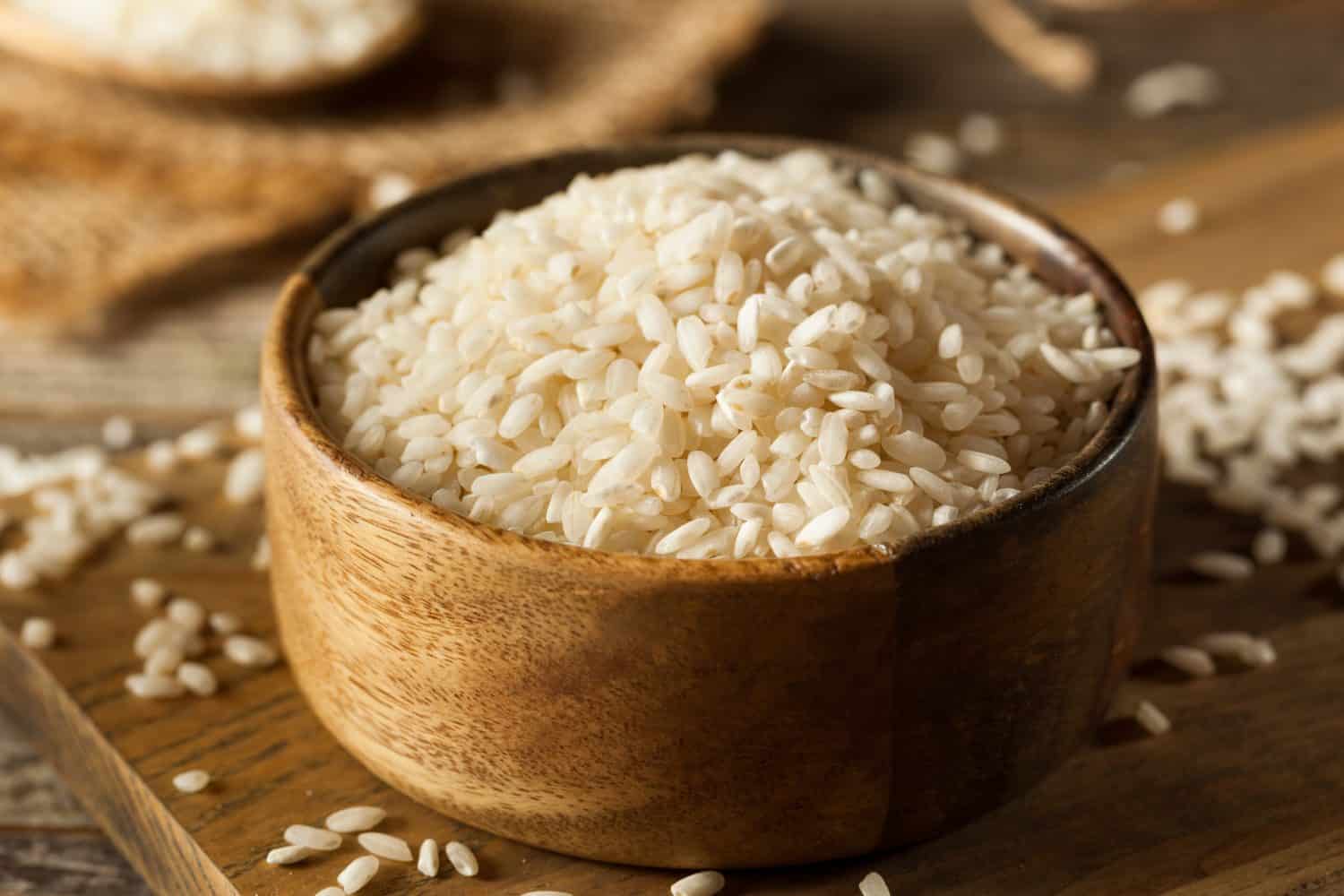 Arborio is an Italian variety of short-grain rice. This rice grain is fat and slightly oval-shaped, and its name comes from the town of Arborio, which is located in the Po Valley of the Piedmont region of Italy.

It is most commonly known as risotto rice, as its high natural starch content results in a chewier and creamier texture, making it the perfect rice for risotto. 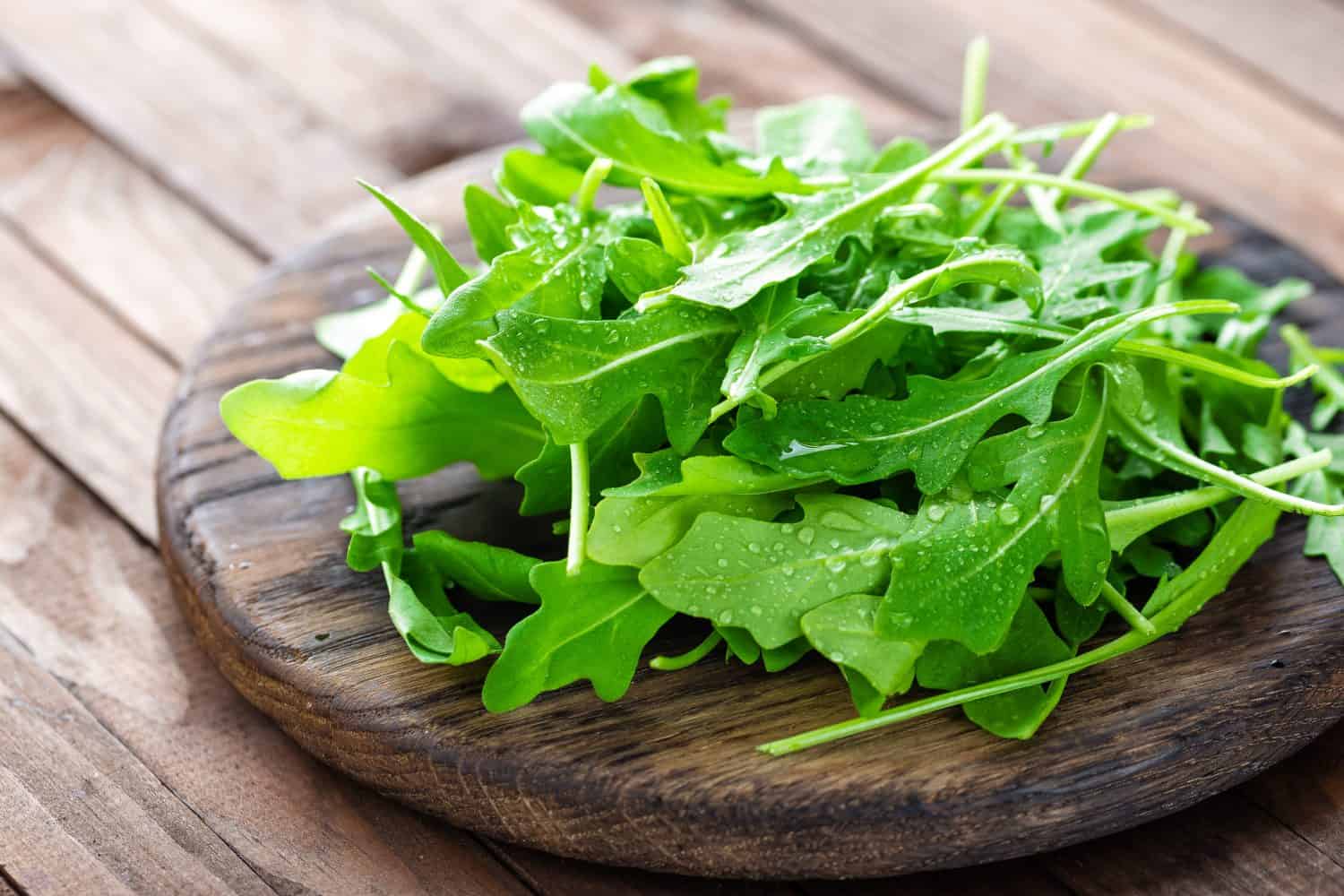 This cruciferous vegetable belongs to the Brassica family, which is the same vegetable family that includes broccoli, kale, and Brussels sprouts.

Often referred to as rucola, rocket, or rugula, it is a leafy green with a distinctive bitter and peppery flavor. Originally used in Roman times as a medicinal herb and aphrodisiac, arugula now serves as an excellent salad component, pizza topping, and omelette ingredient.

It is rich in fiber, vitamin K, and many B vitamins. 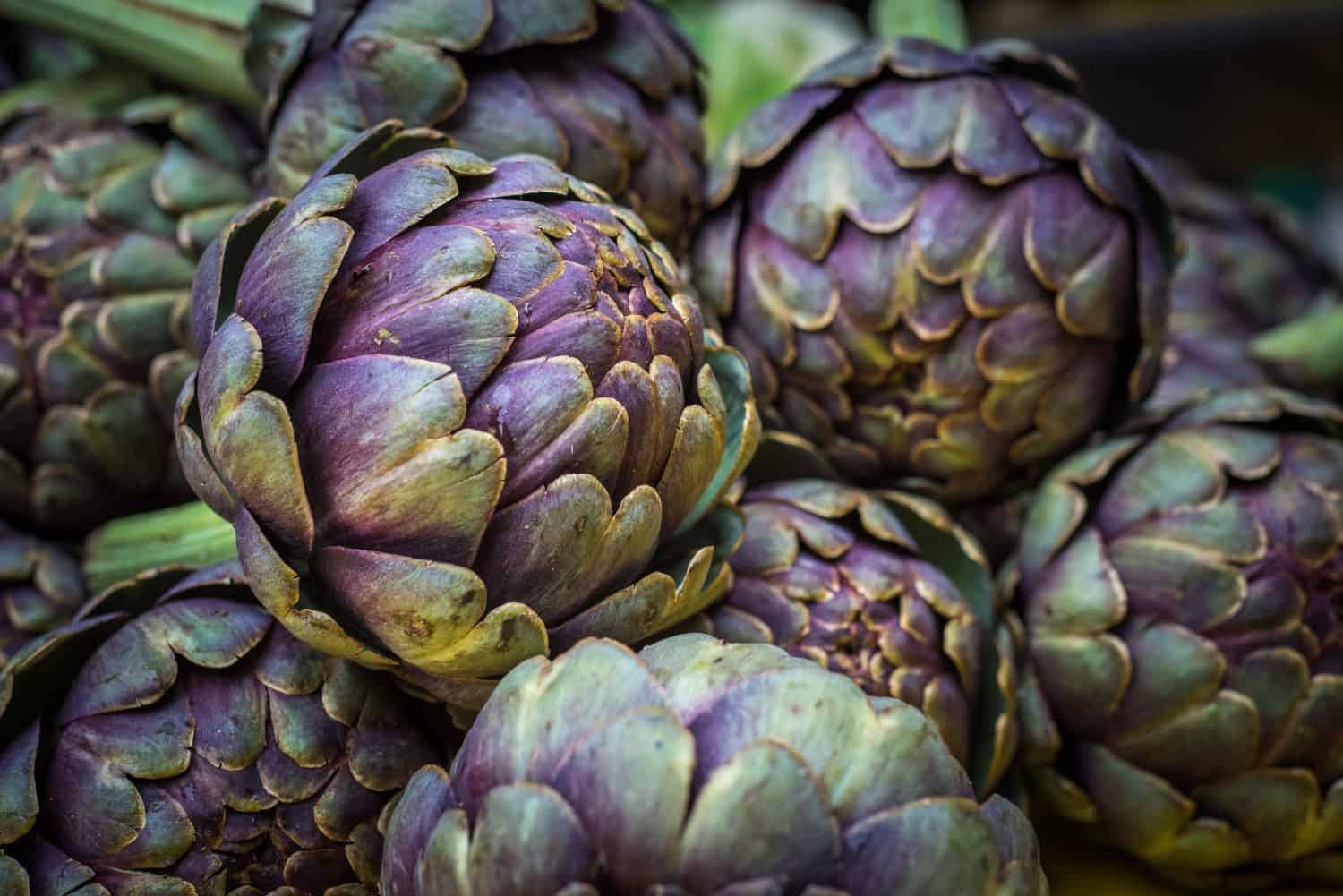 Artichokes are actually a species of thistle, or flower, that are cultivated as food. The meaty core, referred to as the heart of the artichoke, is its edible part, and it can be prepared in a variety of ways.

Artichokes are rich in fiber, folate, and vitamins C and K, and the most common ways to cook them are by boiling and steaming. 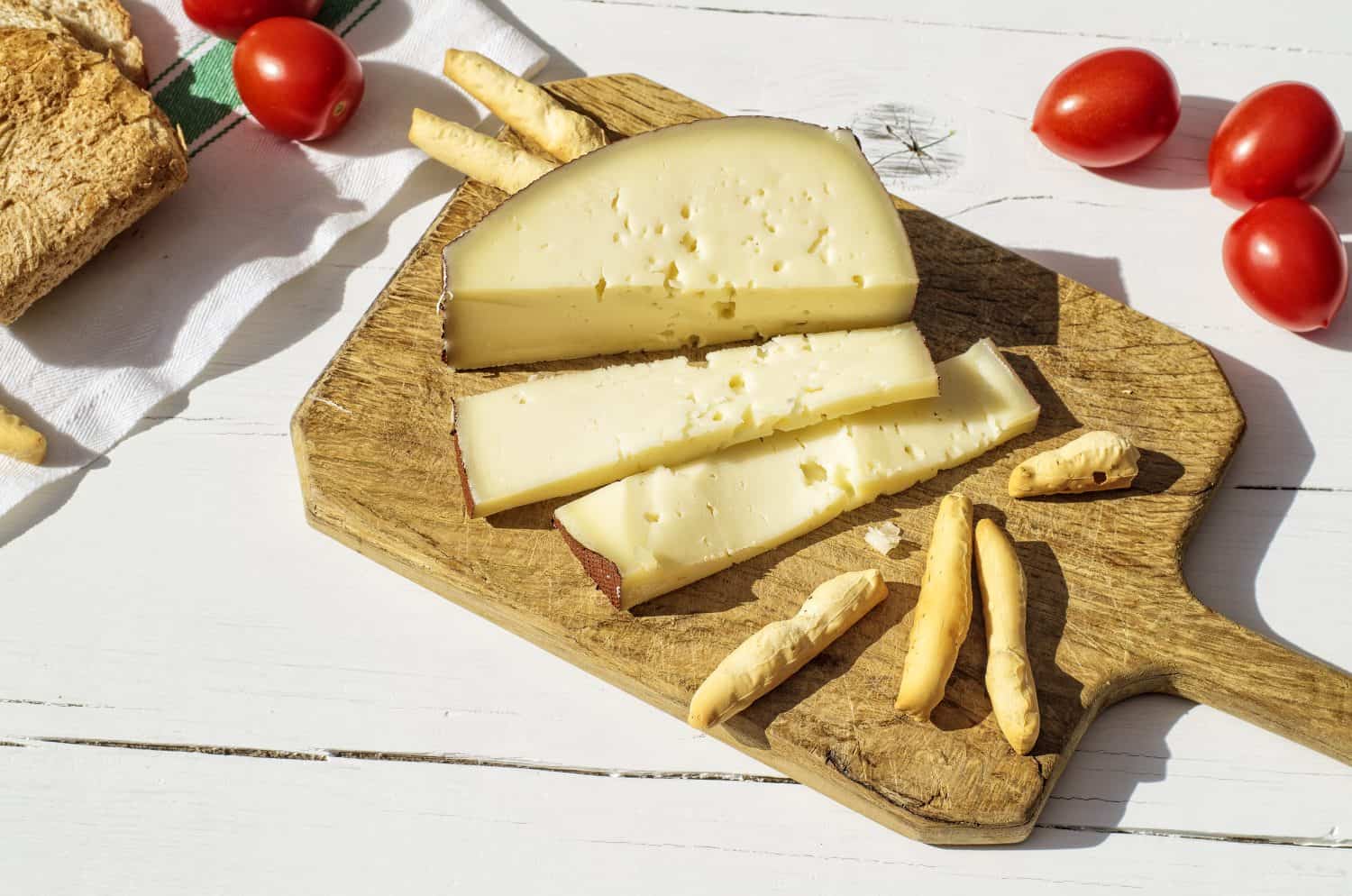 Asiago is a cow’s milk cheese that was first produced in Italy. It can range from smooth (fresher) to crumbly (more aged) in texture, and the length of the aging process also affects its flavor.

Fresh asiago is sweeter and slightly sour, while aged asiago has a much stronger, even nuttier, flavor.

This cheese holds a D.O.P. status, meaning that it can only be produced in certain regions of Northern Italy. It is delicious when baked into bread or grated onto pasta.

This fibrous vegetable is harvested in early spring until mid-summer and grows best in cool regions with long winters.

The word asparagus comes from the Greek word meaning “shoot” or “sprout”, and the vegetable was first used in ancient times for its purported medicinal and aphrodisiac properties.

Asparagus is incredibly nutrient-rich, and contains significant levels of folic acid, potassium, fiber, thiamin, and vitamins A, B6, and C.

Asparagus can be prepared in a wide variety of ways: shaved raw into a salad, grilled, sauteed, boiled, steamed, roasted, or broiled. 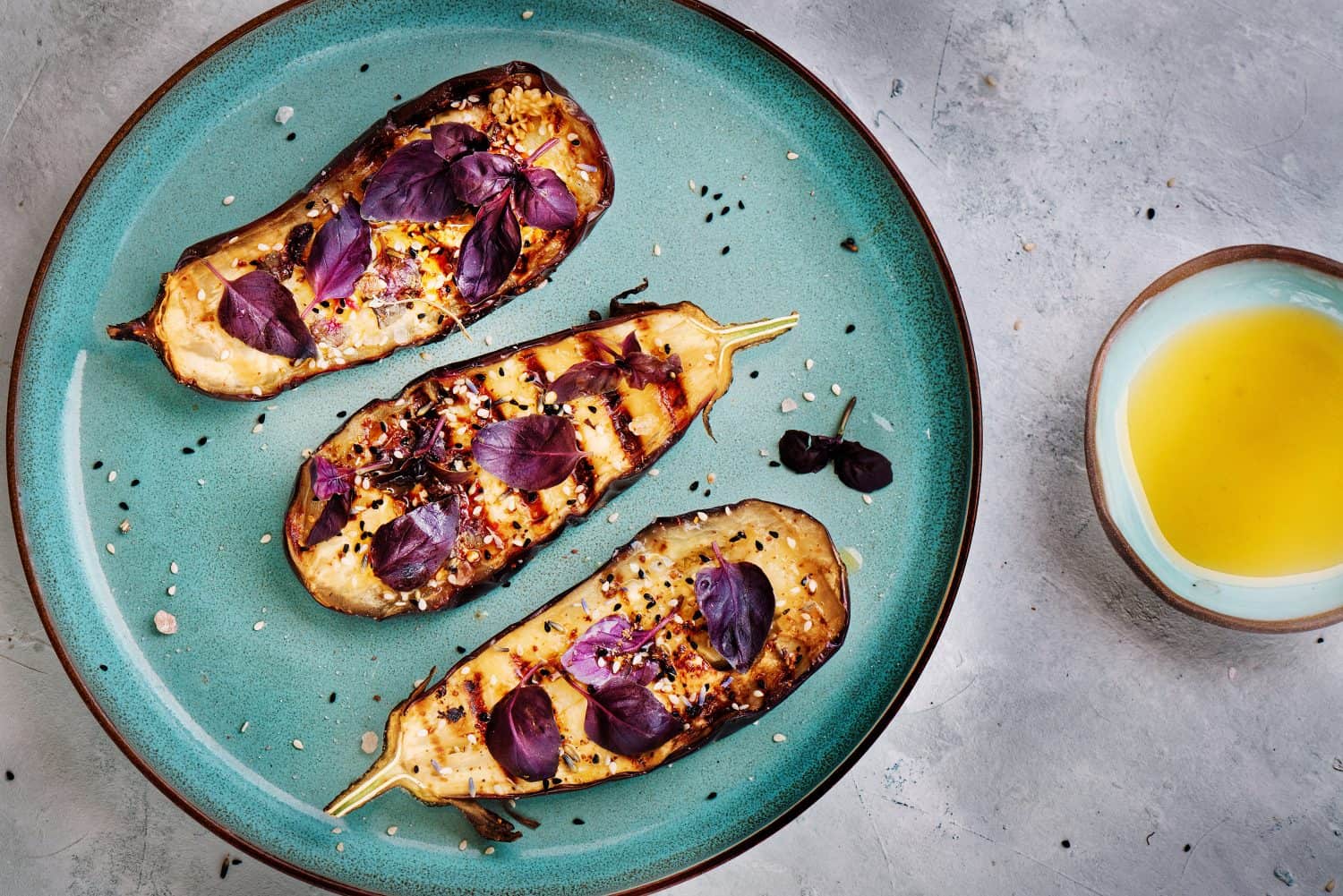 Also known as eggplant, aubergine belongs to the nightshade family. While it is technically a fruit (specifically a berry), aubergines are most commonly used as vegetables in cooking.

They are incredibly low in calories and are a good source of fiber, potassium, and vitamin B6. Aubergines can be found in a variety of international dishes, such as Italian aubergine parmesan, French ratatouille, Turkish and Greek moussaka, and other Middle Eastern and South Asian cuisines. 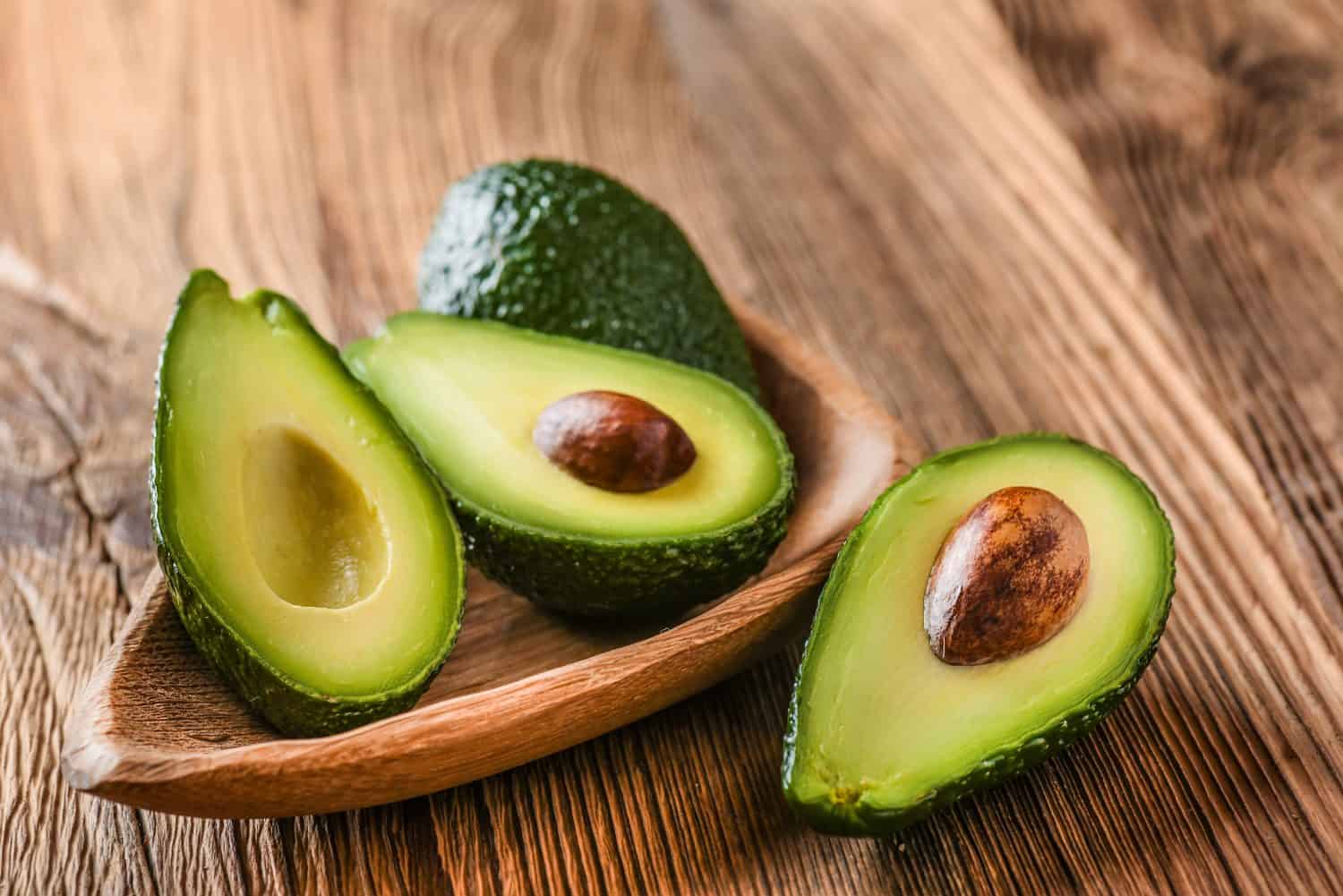 Avocados are a tree fruit native to south central Mexico, and they are the only fruit that actually provides significant amounts of healthy monounsaturated fatty acids.

In fact, 100 grams of avocado provides almost a quarter of the daily recommended value of fat intake: 15 grams. Avocados are also rich in fiber and vitamins C and B6.

They are an essential element in Mexican cuisine, forming the main ingredient in guacamole, and can even be blended into smoothies or baked into brownies.

We use cookies to ensure that we give you the best experience on our website. If you continue to use this site we will assume that you are happy with it.Ok