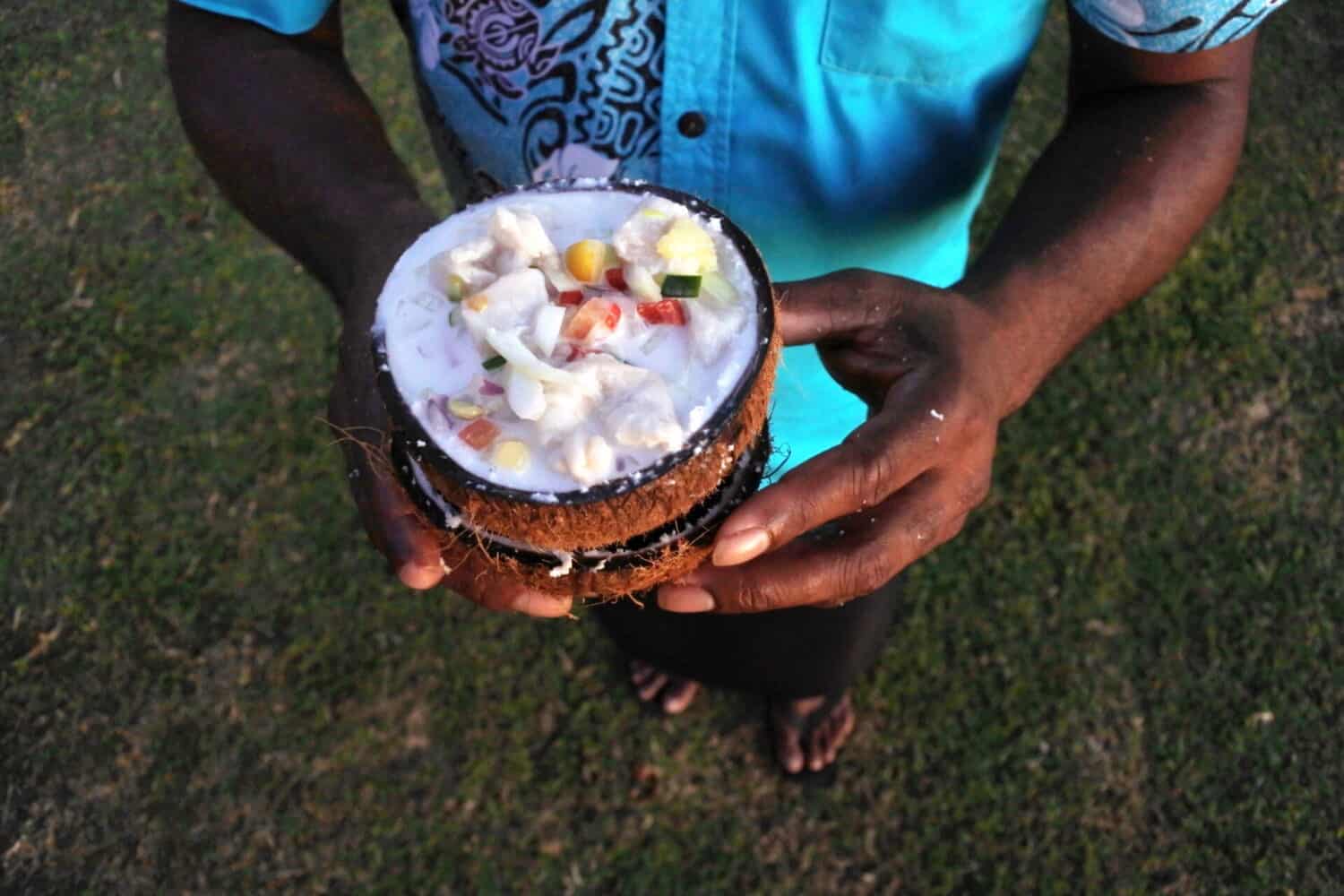 A group of islands lying in the warm turquoise waters of the Pacific Ocean, Fiji’s food culture is traditionally based on staples that grow locally, such as some 70 different varieties of taro, as well as coconut.

The absorption of the islands into the British Empire at the end of the nineteenth century led to a gradual influx of other races. As a result, traditional Fijian cuisine slowly expanded to adopt newly found flavours.

Today, a traditional menu is therefore as likely to include flavours usually associated with Europe, Southeast Asia and China as it is native ones. The abundance of local fish and lack of space to farm large areas of land also makes seafood a common occurrence on menus.

Here are the traditional dishes from Fiji we think you just have to try. 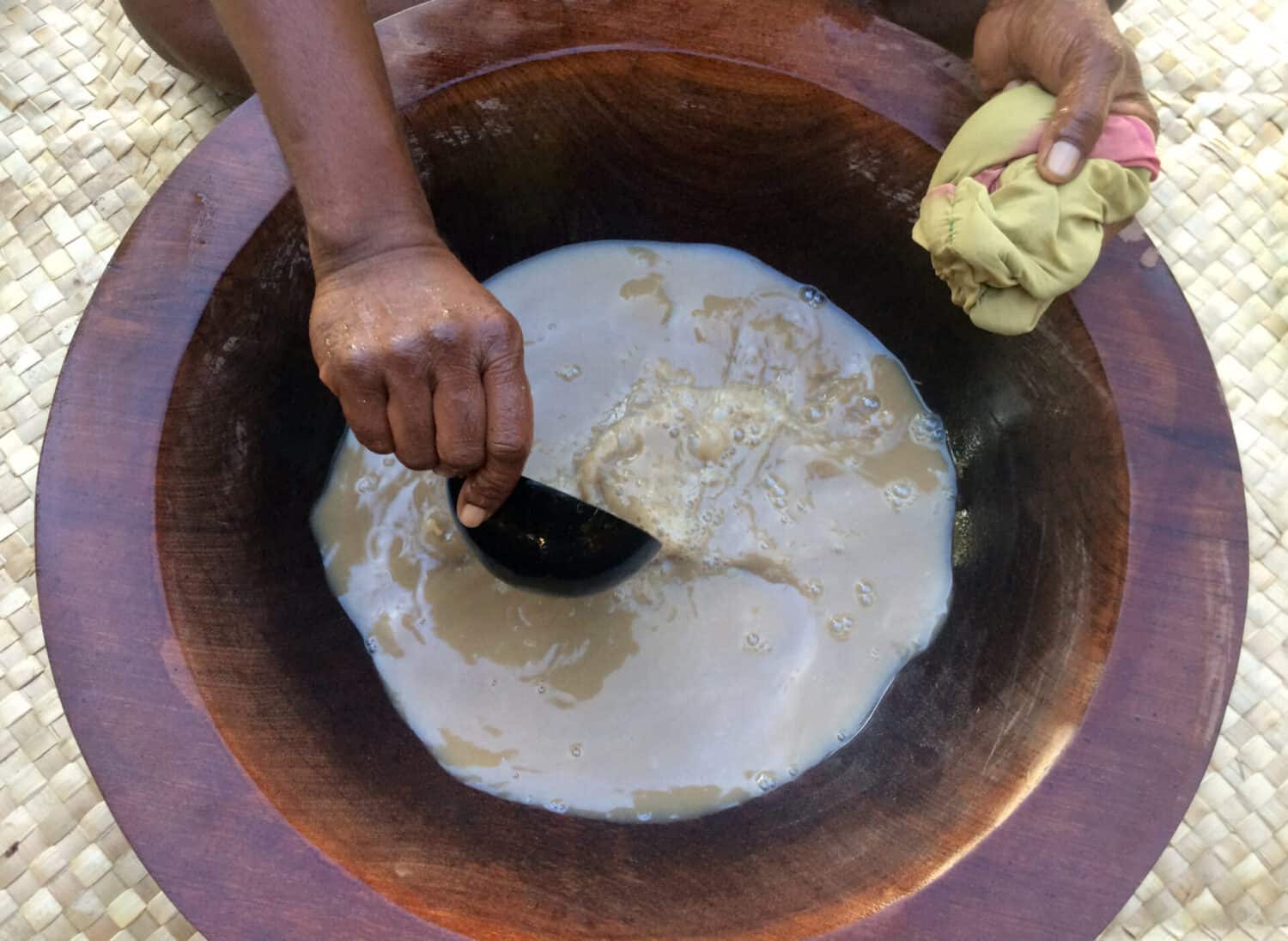 Kava is a traditional drink with very special significance to the people of Fiji, and in particular its men.

It holds an important place in several customs and tribal ceremonies. Being invited to drink kava is a sign of friendship and peaceful intentions stemming from the time when warring factions sought to control individual islands.

The colour of coffee with milk, kava is usually served from a shared bowl carved from a single piece of wood, although plastic basins are now also common.

Made from the powdered root of the yaqona tree, kava has a mildly anaesthetic and calming effect, numbing the tongue especially. Yaqona root flour is soaked in water to extract its active ingredients and then filtered with a fine cloth to remove fibres.

While associated with formal functions, kava is also frequently drunk before a main meal.

Rourou (also spelt roro) is a popular side dish to meats and fish made from the leaves of the taro plant (called dalo on Fiji’s many islands).

The result can be compared to creamed spinach since the leaves are wilted down in coconut cream. Often, a little nutmeg or ginger is also added to provide additional flavour.

You’ll also find taro leaves, together with the leaves of other root vegetables, served uncooked in salads.

Taro leaves also find their way into palusami. This dish consists of the leaves being combined with a thick, semi-liquid coconut cream, chopped onions, and pieces of canned meat.

The ingredients are placed together in a tightly-wrapped parcel and usually cooked as part of a lovo.

Both corned beef and tins of spam are used, with their use going back to the days when refrigerated shipping did not exist and fresh cuts of beef and pork were not readily available on the islands themselves.

Kokoda is a type of local ceviche using walu, or Spanish mackerel. Pieces of raw mackerel fillet are marinated in either lemon or lime juice for several hours. During this time, the citric acid in the juice ‘cooks’ the fish and causes the flesh to turn an opaque white colour.

Once marinated for long enough, coconut milk is added, and the dish topped with finely diced tomatoes, some chilli pepper, and salt.

Kokoda is served chilled, often in the halved and cleaned shell of a coconut.

Also brought to Fiji by immigrants from Southeast Asia is murukku, found among the Tamil communities of southern India and Sri Lanka, and now, of course, Fiji.

A savoury snack food, murukku takes its name from the Tamil word for twisted, referring to the spiral shape that makes these crunchy bites look something like spaghetti spun around a fork.

Murukku is made from a mix of rice flour and black gram (or urad dal) flour combined with salt and a little oil. This helps to form a paste or dough that is then passed through a mould before being deep-fried.

Fiji’s corned beef stew is one of those dishes that tastes at its best when simmered slowly over several hours, allowing each flavour to infuse the cooking liquid.

Normally prepared in a heavy cast iron pot exactly for this reason, canned corned beef is added with enough oil to prevent it sticking to the bottom, and some curry powder or garam masala.

Once the spice blend has begun to release its flavours, the meat is covered in water and allowed to heat through.

Roughly halfway through the simmering process thick pieces of carrot, taro root, or cassava are added. Potatoes are now another option to provide the dish with carbohydrate goodness.

Fijian’s like a sweet treat now and again just like everyone else. One of their favourites is honey cake.

Usually made in a loaf tin, this cake has far more to it than simply the taste of honey. Sour cream helps counter the sweetness of the liquid, while ground nutmeg, cloves, ginger, and cinnamon add warmth and notes of gingerbread.

Readily available, you might find it topped with flaked almonds. Unusually for a cake, this honey cake is actually thought best a couple of days after it has been made, when it takes on a more moist texture, and deeper flavour.

Duruka is the unopened flower bud of a species of sugarcane sold in the markets of Viti Levu and other Fijian islands as long lengths of stem that look a little like bamboo.

Protected by a sheaf of leaves, the flowers do not open, but form a starchy edible mass. And although a sugarcane, duruka is not overly sweet and is used primarily in savoury dishes.

Also known as Fiji asparagus, its taste is likened to that of sweetcorn. A versatile ingredient, it can be grilled, added to curries, or cooked in coconut milk.

Most closely associated with Fiji’s curries, roti is an unleavened (yeast-less) flatbread also going by the name of the chapati.

They have had a presence in Fijian cuisine for at least a century, and remain popular today.

Their ingredients couldn’t really be simpler, consisting of just plain flour, hot water, and a drizzle of oil. However, it can take some time to master the process of making the perfect roti dough to then cook in a pan.

As well as served as a side, wraps can also be made from roti, containing everything from curried chicken to stewed vegetables.

Topoi are a form of Fijian dumpling made from a mix of grated cassava (called tavioka in Fiji from its alternative name of tapioca) and coconut, together with coconut milk or sugared cream.

An unfilled dumpling, the mix is shaped into balls or moulded, before being poached in boiling water until they soften all the way to the centre.

When cooked, the dumplings are removed from the pot. However, the leftover water is not thrown away. Instead, more grated cassava is mixed with the water, alongside coconut milk to form a porridge.

The topoi alone, or topoi and porridge make up a standard traditional breakfast, with fruit jams providing further sweetness.

Topoi dumplings are not the only use of cassava in a sweet or semi-sweet dish in Fiji.

The mix of ingredients, with some butter, is baked in a pan rather than in an oven, creating a moist cake capable of being sliced. It’s common for sweet liquids such as condensed milk, custard, or even mashed bananas to be added before cooking to provide even greater flavour.

Normally speaking, vakalavalava is eaten in the afternoon or evening, however it is also eaten for breakfast.

Fijians seem to place a huge importance on breakfast (and who wouldn’t), with the last traditional dish on our list also a breakfast staple.

Described as either a pancake or a doughnut, babakau are a little of both.

Cut into triangles or thin rectangles, babakau are made from a light doughnut-like dough of flour, water, yeast, and sugar that is then deep-fried.

Interestingly, the women who make these tasty treats will tell you that grated onion serves just as well as sugar as a sweetener.

In addition to being eaten alone, babakau are often consumed with jam or butter for breakfast, rather like toast might be eaten elsewhere.

However, babakau can also be filled with a range of very varied ingredients, from grated coconut to leftover curry.