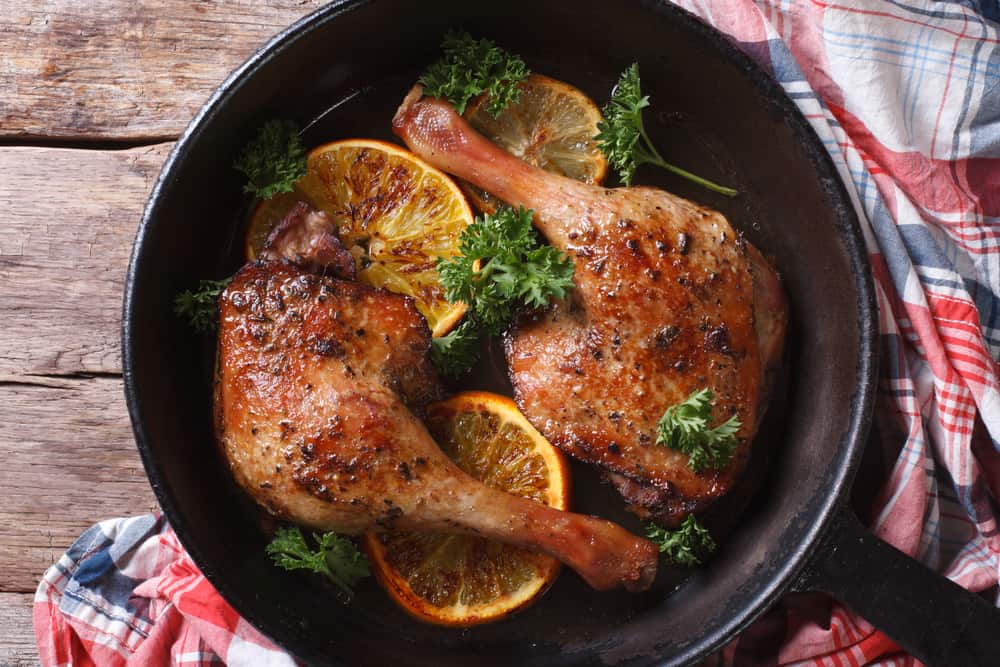 You might constantly encounter duck on the menu of popular restaurants. Because it is on the expensive side, you might think what it tastes of?

This article will cover exactly what duck tastes like and common questions related to its taste.

Duck meat is for chicken lovers. Only it is richer than your average poultry.

Meat from a duck is usually smaller in quantity than a chicken’s or turkey’s. This does not necessarily mean it lacks in flavour or texture.

Duck has a strong flavour that makes most foodies declare it a winner over poultry.

Furthermore, the breed of the duck you are consuming affects its taste. For instance, British ducks taste tender and delightful. They fill your mouth with a delicate richness.

French Duck, on the other hand, tends to be stronger with a colorful flavoured abundance.

Still, it can be pretty challenging to describe all the flavoured parts of duck. It is also hard to explain how they go with complimentary meals.

Generally, duck is very meaty, juicy, and the right amount of fatty. Most people also consider duck meat to be tender.

Because duck is a bird, diners sometimes expect it to taste like chicken or even turkey, but it rarely does.

As it turns out, duck tastes more like a great piece of a roast than it does poultry.

Challandais is a variety of duck called roasted duck. The extra flavouring gives it even more of a finely sweet flavour. Roasting duck meat brings out more of the flavour it already has tucked within its elements.

This makes it have a delicious meaty richness.

The duck meat’s richness also serves as an appetite booster.  Another significant difference between duck meat and other birds is its skin.

When the duck skin is cooked, it becomes quite crispy, thicker and crunchier, almost like a shell of sorts.

Also, it is high in fat content, but it turns out to be a favourite for most diners, even for health buffs. This is because it is one of the most delicate parts of the duck delicacy.

The individual taste of duck is largely decadent. Plus, it contains several notes of sweet and savoury mixed together.

Impressively, you don’t need to add any extra spices to get those flavours out. Duck always tastes excellent even without basting or cooking it with other ingredients.

Even when cooked with spices, duck meat still comes out great. In Bali, a ceremonial dish made with duck involves rubbing the whole bird with several spices including tamarind pulp, turmeric, ginger, coconut bark and shrimp paste.

Essentially, duck is the dark meat of poultry, and it tastes like the delicacy it is. 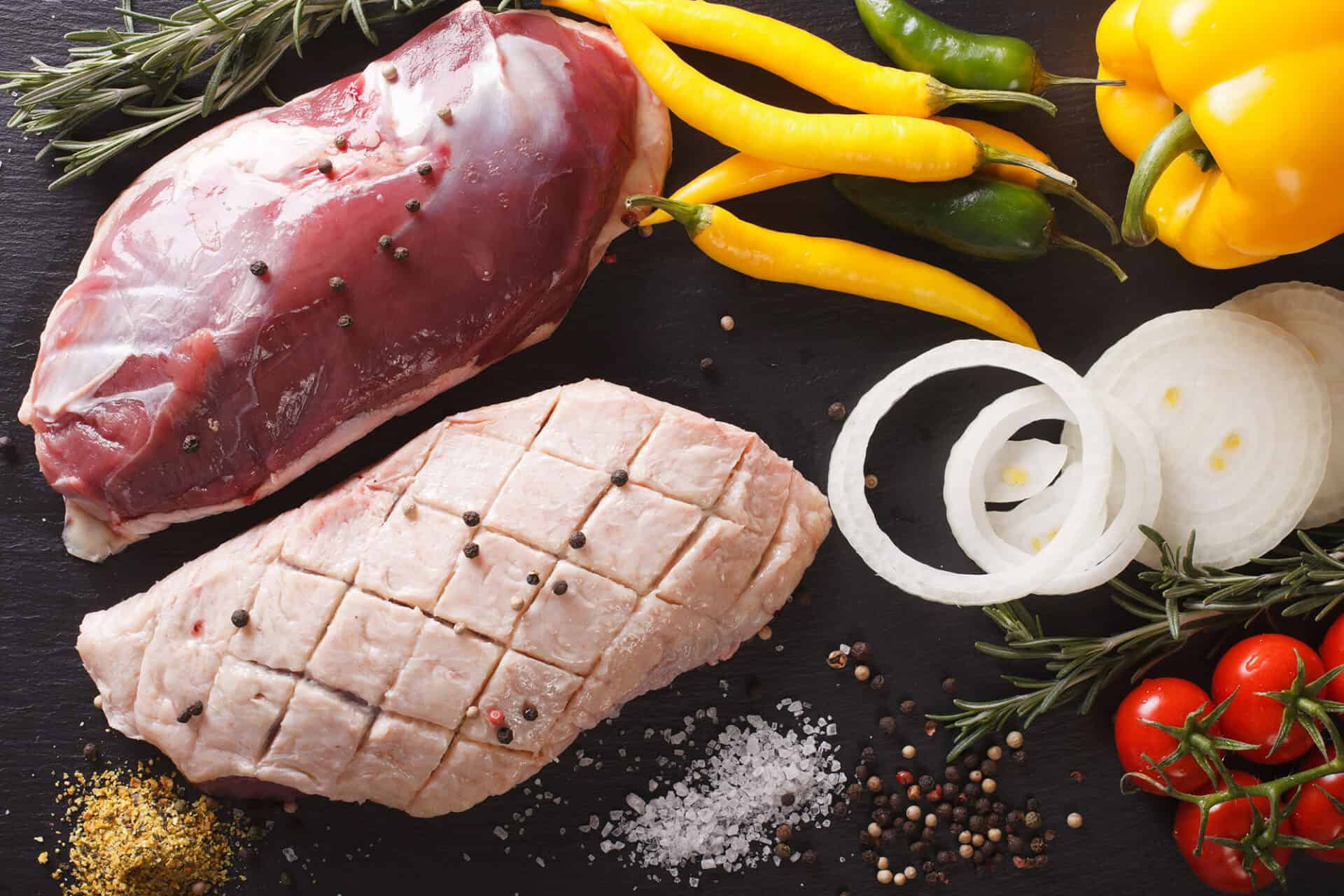 Geese and ducks are types of waterfowl that are a part of the Anatidae family. Therefore, it is easy to assume that they taste the same or slightly different. But they do not.

While duck can be both savoury and sweet, goose meat is mostly sweet. It is also very juicy.

Goose meat even appears to be dripping with juiciness, especially when well-cooked.  Again, goose meat is fattier than duck meat. The goose is even fuller and meatier.

Goose meat is slightly redder than duck meat which means it has a slightly higher iron content. Not unlike duck, the goose has a crusty and crispy outer skin. However, it’s softer than that of duck’s because of its extra juiciness.

Since ducks are omnivores, they generally have lighter flesh than goose. They have a game wildlife sort of taste. Goose, on the other hand, tastes darker with even fattier meat than a duck.

Chicken has one of the least gamey flavours of meat. Unlike duck, it’s very average tasting. Duck’s gamier flavour makes it more interesting to eat even when it’s not cooked with any particular recipe.

Chicken’s taste is more unadorned and more generic. It is also pretty similar to turkey. Chicken requires flavour and spices for it to be enjoyable. Duck, on the other hand, is most enjoyable by itself.

Still, the way a chicken is raised can primarily affect its taste. For example, a free-range chicken usually has a more intensified flavour profile.

In general, though, duck is rich and meaty while the chicken is lighter and more neutral.

Is Duck Healthier Than Chicken?

Duck has been declared healthier than chicken by some experts, but most cannot decide. Duck skin is very fatty when cooked, and even though this makes it juicier, it is a source of cholesterol.

It is an excellent source of protein. Eating duck meat will affect your skin, making it glow and look healthy.

Duck meat is a source of vitamins B12 and B5. These vitamins are useful in the nervous system. They also help in overall body function.

It is a source of iron, which means it is recommended for people suffering from anaemia. Duck meat is also rich in minerals like potassium and magnesium.

Although it is healthy, duck meat needs to be eaten moderately. This is because it is high in fat and subsequently, cholesterol.

Dishes like Peking duck is an alternative to other types of meat. The fat in duck meat is mostly located in the skin. Therefore, cooks can serve a less fatty dish with the same flavour.

In addition to that, ducks contain fewer calories. Similarly, they have lower saturated fats compared to chicken.

Their flavour is more pronounced than chicken eggs because of the duck’s diet. Since ducks are omnivores, they have a well-rounded diet which leads to rich flavours.

Ducks prefer snails, insects, slugs and other creepers with high-protein content.  Their diet plays a significant role in the taste and flavour of the eggs and duck as a whole.

As a result of the larger yolk, duck eggs are higher in both cholesterol and fat compared to chicken eggs. They also have higher protein content. They have an increased level of omega-3 fatty acids.

This is why they are a top pick for paleo dieters, most of whom love high-fat foods. Besides, the nutritional profile of duck eggs is near in composition to that of chicken eggs.

Duck sauce is an apricot sauce that is usually eaten in Chinese restaurants. It tastes sweet and fruity with a little spice from the vinegar.

Many people have said that duck sauce is similar to orange marmalade. This is because they have the same colour and the same thick and jelly-like texture.

Although traditional duck sauce is smooth, some duck sauces are chunky with pieces of fruit. It is called duck sauce because it was initially made for a fried duck dish.

It has a soft and loose consistency. Duck fat contains about 50% less cholesterol than butter and 30% less saturated fat.

To Sum It All Up

In conclusion, duck meat has a unique taste, more similar to roast than to chicken.

This makes it really desirable to a lot of people. The layer of fat between the skin and the flesh makes it rich and gives duck meat the distinct taste.
Duck meat contains a lot of minerals and vitamins such as vitamins B5 and B12, zinc, magnesium and so on.

Duck meat is for everyone who wants healthy meat, that is delicious at the same time.