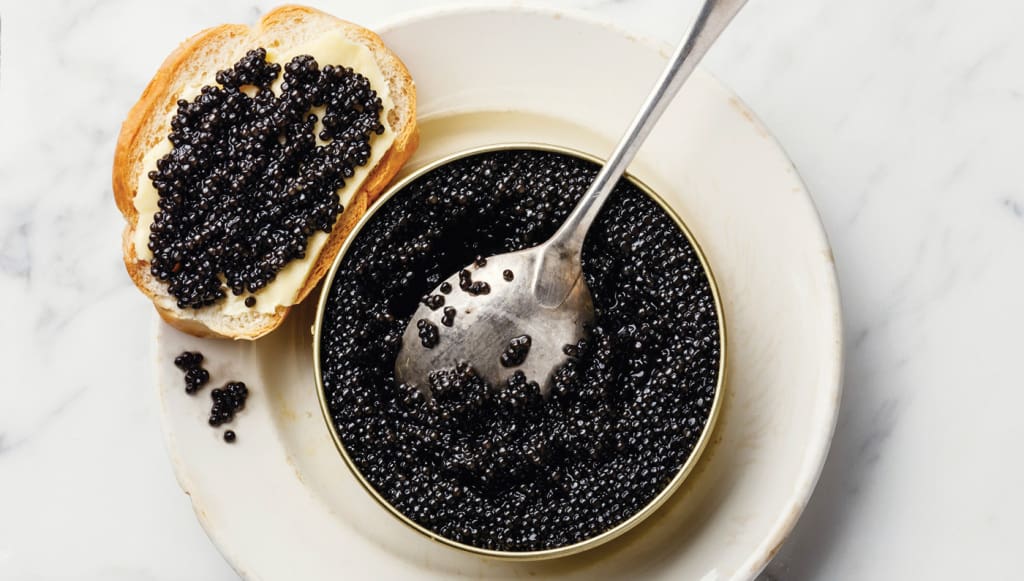 Caviar is considered a delicacy and is eaten as a garnish or a spread.

This article will cover exactly what caviar tastes like and other common questions relating to caviar.

There is one thing everyone agrees on; caviar is an acquired taste.

Very few people enjoy caviar the first time they eat it. Connoisseurs love their caviar, but a lot of people would describe caviar as fishy and salty.

Some caviar has a softer combination of flavours — velvety, buttery and creamy notes.

Experts claim that there are up to 15 different flavours you can encounter when eating caviar. The taste of caviar can change considerably from one roe to the next.

Consequently, a novice roe eater will have a difficult time understanding the art of caviar tasting.

Why is Caviar so Popular? 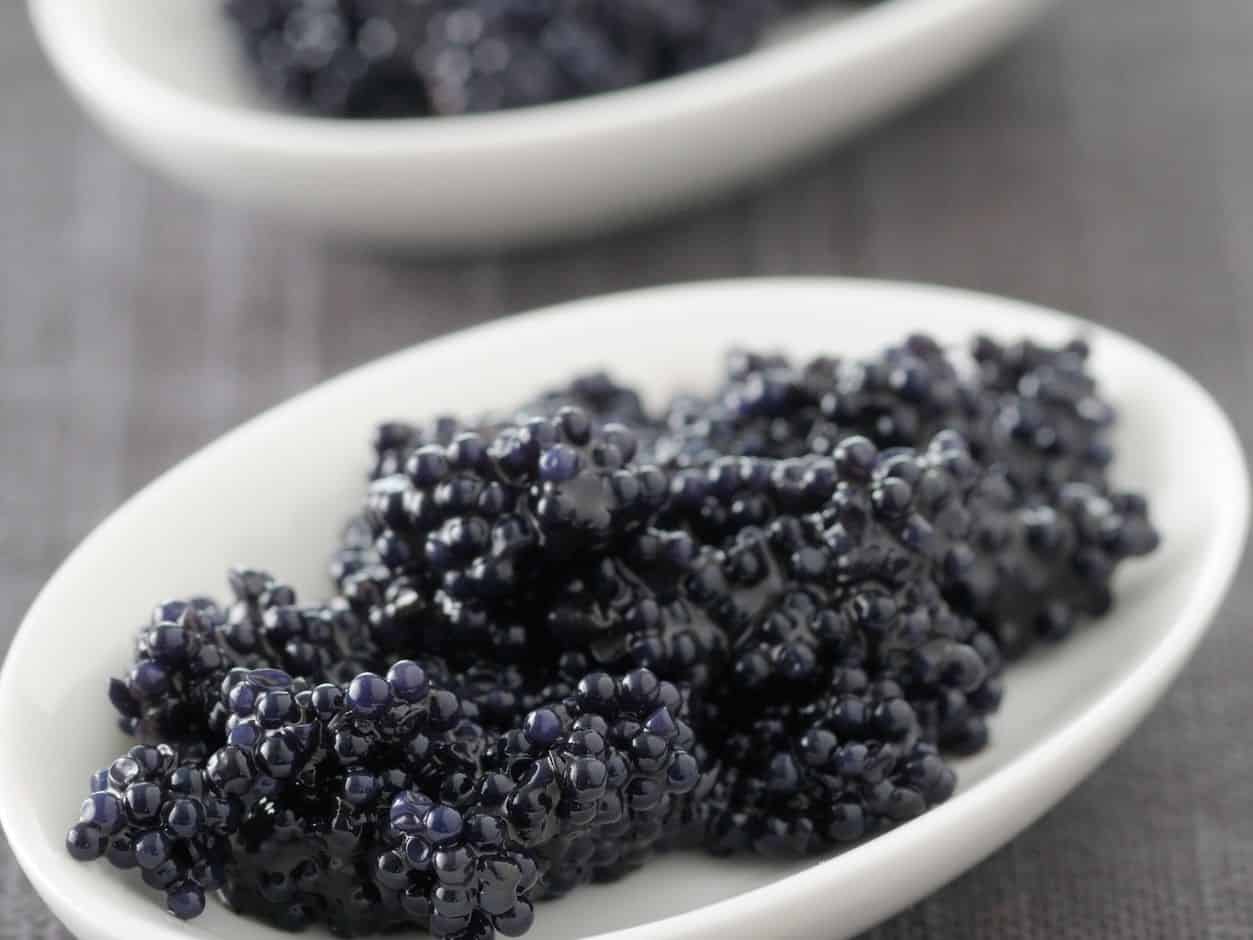 From ancient times, caviar had been reserved for royalty, served up for only the most cultured of palates. This was probably due to the scarcity of sturgeon in Europe.

But when Americans discovered that sturgeon was abundant in their waters, they set up exporting enterprises to get the coveted fish into Europe.

This led to extinction in the US waters and the Caviar Boom, where most of the exported fish were imported back into the United States.

Because the fish was so scarce, they became overpriced and steadily grew in popularity. Vendors began to develop domestic ways to breed the sturgeon fish.

In the end, the sturgeons couldn’t keep up with the demands for their coveted eggs, making them scarce, precious and ultimately popular.

Why is Caviar Expensive?

Caviar has been marketed with one narrative for centuries — the food for aristocrats.

Naturally, it ought to have a price tag that goes along with its status, don’t you think? It is almost pretty certain that people assume the synonyms of caviar include extravagance and wealth.

To buttress the point, royalties and Russian oil barons serve caviar at the parties they host.

Caviar also has a legitimate reason to be so expensive.

Their source is scarce, and even rarer is the best quality caviar which has to come from older and matured sturgeons. Besides, the means of production always incurs steeper costs.

Caviar can only be made from fish eggs that are harvested by hand.

Obviously, without automating the process of creation, costs will run on the higher side.

Caviar and roe both come from fish eggs, making it easy to assume they are the same thing when, in fact, they are not.

The former is an exquisite delicacy, one containing low salt-cured unfertilized fish roe strictly from the sturgeon fish of the Acipenseridae family alone.

Roe, on the other hand, refers to the fully ripe unfertilized eggs of fish and other marine animals including squids, scallops, shrimp and lobsters. Those in the business call uncured roe “green eggs.”

When harvesters gather eggs from the sturgeon, they consider it to be roe until it is salt-cured and turns it into the delicacy caviar.

Some restaurants even provide uncured sturgeon roe which you can salt by your tableside as part of their experience.

Furthermore, many chefs use roe in varying dishes. Even salted roe is sold as caviar in some places.

Nevertheless, most of the world only consider these to be caviar substitutes instead of the real deal.

What is Caviar Made Out of?

As explained above, only sturgeon eggs qualify as real caviar.

Although people have saturated the market today with different salted roes that they pass off as caviar, the significant difference is in the species.

Note that the variation in species goes a long way to affect what caviar tastes like.

This makes caviar all the more priceless.

The type of the sturgeon species, its age, what country and waters it was bred in go a long way to affect the varying flavours of the exquisite caviar.

Not surprisingly, the difference in species also affects preference, as consumers learn to favour one particular variety over the other.

Where Does Caviar Come From?

This is due to the effects of overfishing in the wild. Sturgeon farms use aquaculture to raise fish and prepare them for mass roe production.

The youngest of the fish require to be continuously fed, but this need reduces as they grow older.

Interestingly, sturgeon can only be harvested when they are seven years and above. Typically, age 10 is the limit for collecting a sturgeon’s eggs.

Three are several ways to harvest eggs from a sturgeon. Stripping is when harvesters remove the ovaries of the fish from it to extract the eggs through a small incision in the fish wall.

Another method is to massage the eggs out of the fish.

Thirdly, a cesarean section will allow the harvesters to scoop out the eggs.

It is widely rumoured that methods of extraction can affect the final taste of the caviar.

So can the rest of the procedure. Harvesters have to remove the fragile eggs by hand, rinse with cold water, and pick away impurities while using tweezers.

Salting caviar is an art by itself.

The producers of the best tasting caviar in the world have learned to cure the sturgeon roe to allow their flavour escape in sizzling sensations.

Very fine salt called malossol has a salt content of less than 5%.

There are even finer salts with less than 3%, and this type gives the dish the minimally salted taste that keeps it unique.

Is Tobiko the Same as Caviar?

Apart from confusing caviar with roe, people confuse tobiko with caviar as well.

It can be challenging to tell the difference if you are a novice caviar eater. Many people believe that they have consumed caviar because they ordered fish eggs with sushi, but this is not typically the case.

Pricey sushi is served with tobiko, which is actually flying fish eggs.

A noticeable difference is that their colours, sizes, textures and tastes differ from each other.

What’s more, tobiko is likely found in Japanese settings, while real sturgeon caviar can be found in finer dining settings.

Tobiko is typically a red-orange colour but can come in black, red or green varieties.

They taste differently though, with a mild-smokey taste, sometimes salty and are quite crunchy.

Traditional caviar retains its exquisiteness and appeal for many fine diners, but learning to love it requires repetition and patience.

As an acquired taste, caviar is quite captivating once it has you within its grasps.

Be sure to try out several types of caviar before you decide whether it is for you or not.

You might end up finding the particular sturgeon roe you will fall irrevocably in love with.