Situated on the stretch of coast known as the Bight of Biafra, where West and Central Africa meet one another, Cameroon’s food traditions take their cultural influences from both regions.

In addition, this ethnically and geographically diverse nation has also adopted newer recipes (not least the baguette) and cooking techniques from its periods as part of the German, British and French empires in turn, from whom it has been independent for roughly 60 years.

Looking to sample some of Cameroon’s cuisine? Know what to look out for with our guide to all that’s worth eating from Cameroon. 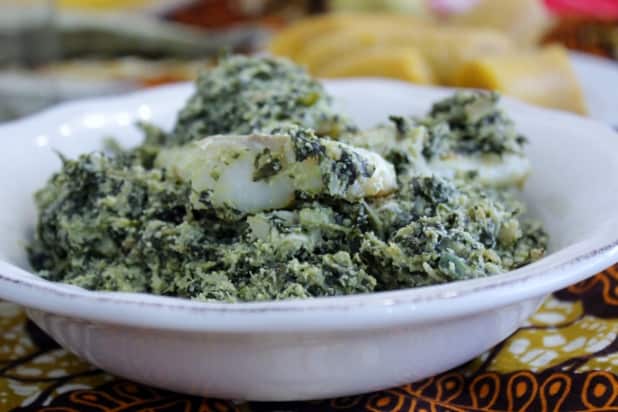 Perhaps the easiest to find of any of Cameroon’s traditional dishes is ndolé, a stew comprising sliced up bitterleaf greens (a sort of local spinach), pieces of meat, and a paste made from peanuts (groundnuts).

The meat used is usually beef, most common in the drier northern parts of the country, while the meat can be replaced with fish or seafood along the coastal stretches in the south.

The result is a plate of food that has the familiarity of an Asian peanut satay sauce with an added flavour profile from the bitterleaf greens.

It will normally be served along with carbohydrate staples such as rice or pieces of ripe, deep-fried plantain, which adds a sweet note to the dish.

One of the other main sources of carbohydrate energy in Cameroon is fufu. In the French rather than Anglophone portions of the country (the majority of Cameroon), fufu goes by the name of couscous, but it is not the same as the North African dish.

Fufu’s main ingredients are cassava flour and green plantain flour in roughly equal measures, although any available flour, including maize and semolina can be used instead.

The cassava, or other crops being used, are pounded in a large wooden pestle and mortar. As it is broken up into a flour, it is blended with water until it takes on a glutinous dough-like consistency, at which point it can remain stable under a moist cloth for several hours.

Small pieces of the fufu are torn off the main ball and dipped into sauces to flavour the relatively bland mix. It is a particularly popular side dish for the nation’s soups as a result.

One such soup is eru. It is a dish originating in the southwest of the country with the Bayangi people, but now much more commonly consumed.

It takes its name from the eru leaves (a plant related to pines and conifers) that is its primary ingredient. The leaves are finely chopped before being cooked down to create a dish more closely relating to cooked greens than a soup as such.

Other ingredients include another leaf known as waterleaf, which is now being replaced by true spinach, as well as palm oil, fish or beef.

It is made by combining beef tripe with water, palm oil and spices including Scotch bonnet or similarly hot chillies, and a little ground limestone which helps create a smooth finish.

Also known as yellow soup on account of its colour, achu is almost always paired with mashed cocoyam (taro or malanga) tubers.

It is also different in that kwacoco is wrapped in banana leaves and then steamed to cook it.

Kwacoco originates with the Bakweri (or Kwe) people, who’s ancestral homeland is a central coastal belt in the country.

If the plain kwacoco is mixed with additional ingredients including leafy greens, smoked fish and palm oil, it becomes known as kwacoco bible.

On its own, kwacoco has little taste, and is predominantly eaten for its ability to fill the stomach. As a result, it is normally offered alongside other soups or sauces that it can be dipped into.

A common sighting alongside kwacoco is banga, or palm nut soup. It is made from the nut (in other words, the fruit) of the oil palm.

Both fresh and smoked fish are used. When fresh fish is used, it tends to be a species of locally-caught catfish. Adding smoke-dried fish instead (common further from the coast) creates an additional layer of complexity to the dish.

Known locally as soya, but more regularly in big towns and cities by the French term brochette, this is the general term used for meat cooked on an open fire by skewering bite-sized pieces to create kebabs.

Easy to find on street-side food stalls, soya can be prepared using beef, mutton, or chicken, with red meats the most common since they don’t dry out under the high heat of the grill.

A well-cooked soya is succulent and tender to eat. The natural flavours of the meat are enhanced by often adding chilli oil during the grilling, and serving with slices of cooked or raw onion as an accompaniment.

Soya can also be found on the menus of restaurants throughout the country, as well as abroad.

Egusi (or agushi) seeds are the seeds you find in pumpkins, squashes, and gourds. When cleaned of the flesh or other fibres they can be dried and removed from their skin. They are then ground to a powder, which is an ingredient in several traditional dishes.

The most notable is probably egusi soup. Varying from region to region and even village to village, the ground egusi is used as a way of thickening water-based broth into a heartier soup.

The flavours associated with egusi soup come from the extra ingredients it contains, typically bitterleaf, pumpkin leaf or spinach, together with tomatoes and okra.

Like many (if not all) Cameroonian dishes, it is seasoned with a good amount of chilli peppers.

Egusi soup will normally also include some form of meat, whether that’s beef, mutton, or fish.

It may be an off-putting idea to some, but kanda, or cow skin, is another traditional element of Cameroon’s cuisine.

More correctly speaking, kanda is dried cow skin, with the fresh ingredient going by names such as pomo.

Naturally one of the tougher cuts of the cow, kanda undergoes a long process in kitchens to get it ready to eat.

First the skin is plunged into boiling water to help in the removal of the hair by scrapping. This step can also be carried out with scorching, by placing the skin directly onto an intense flame.

The kanda is then placed into a boiling pot, but this time to slowly cook it in water, helping to tenderise it. It can then be dried like biltong or jerky and stored for long periods before being used in any dish.

An intriguing grey or black in colour, mbongo tchobi is a thick sauce or paste that accompanies grilled meats and the likes of fufu and kwacoco.

Having tomatoes as a base ingredient, its black colouring comes from the inclusion of ground mbongo (hiomi) sticks that are first blackened over an open flame.

Other flavourings and spices include nutty njansa, nutmeg, garlic, and alligator peppers.

Garri is an alternative to fufu and kwacoco, made from peeling and grating cassava tubers, followed by washing the grated material in water (which actually removes dangerous toxins).

The resulting blend of cassava and water is next placed into a porous bag so that the liquid can be squeezed out, either by hand by twisting the top of the bag until taught, or by using a press.

Several hours later, the cassava will be dry, and can be fried, usually in a traditional clay pot. At this point the garri can be stored, or it can be re-soaked in hot water to form a dry dough that is eaten with the country’s huge number of sauces and soups.

Another alternative is bobolo, in which fermented ground cassava is wrapped in leaves. The fermentation gives the bobolo an extra kick of sourness compared to garri.

Say it with the right emphasis, and koki sounds a little like its English equivalent, cowpea.

Thought to have been one of the earliest crops farmed on the continent, several thousand years ago, the seeds of the cowpea can be cooked, added whole to a stew, or ground into a paste or flour.

If you’re in Cameroon, you’re most likely to find koki as a snack food, comprising the main constituent of small tasty savoury bites.

As well as ground cowpea, these bites also contain a blend of spices. They can be prepared in various ways, but can generally be found as ping pong ball-sized morsels that are either deep-fried or steamed in banana leaves.

Another traditional Cameroonian food with a repeated name is njama njama, which also goes by the less exotic sounding name of the African huckleberry bush.

It is the leaves of the huckleberry that go into njama njama, which are sliced, and then cooked down by steaming or blanching in boiling water until wilted.  The leaves are then fried in a good dose of palm oil, which creates a sauce around the leaves.

Tomatoes can be added, as well as chilli peppers and other ingredients, although the most authentic versions of njama njama are nothing more than the sauteed leaves.

Jollof rice is popular right across West Africa, with communities across the region arguing over who created this dish and what ingredients should go into it.

If it was to be likened to any other dish, that would probably be paella from Spain, although that’s to take nothing away from jollof and its origins.

The orange colour of the rice when served comes from the addition of tomato puree, as well as the use of maggie stock cubes and other local spices, such as nutmeg and curry powder.

The rice and all the ingredients are cooked together in a pan on a stove until the rice is soft, at which point a steaming plate of jollof comes your way, draped with a chicken leg, brochette of beef, or even shrimp if you’re on the coast.

The rather generic name might not give much away, but the humble ‘meat pie’ of Cameroon is a popular snack food in the country, with whole menus in fast food-style eateries in large cities built around them.

Often semi-circular in shape, like an empanada or Cornish pasty, and roughly the size of a hand, flaky pastry is filled with finely chopped or minced beef, root vegetables including onion and carrot, herbs such as bay, and pieces of hard-boiled egg.

Eaten hot or cold, they provide nourishment for hundreds of thousands in Cameroon every day.