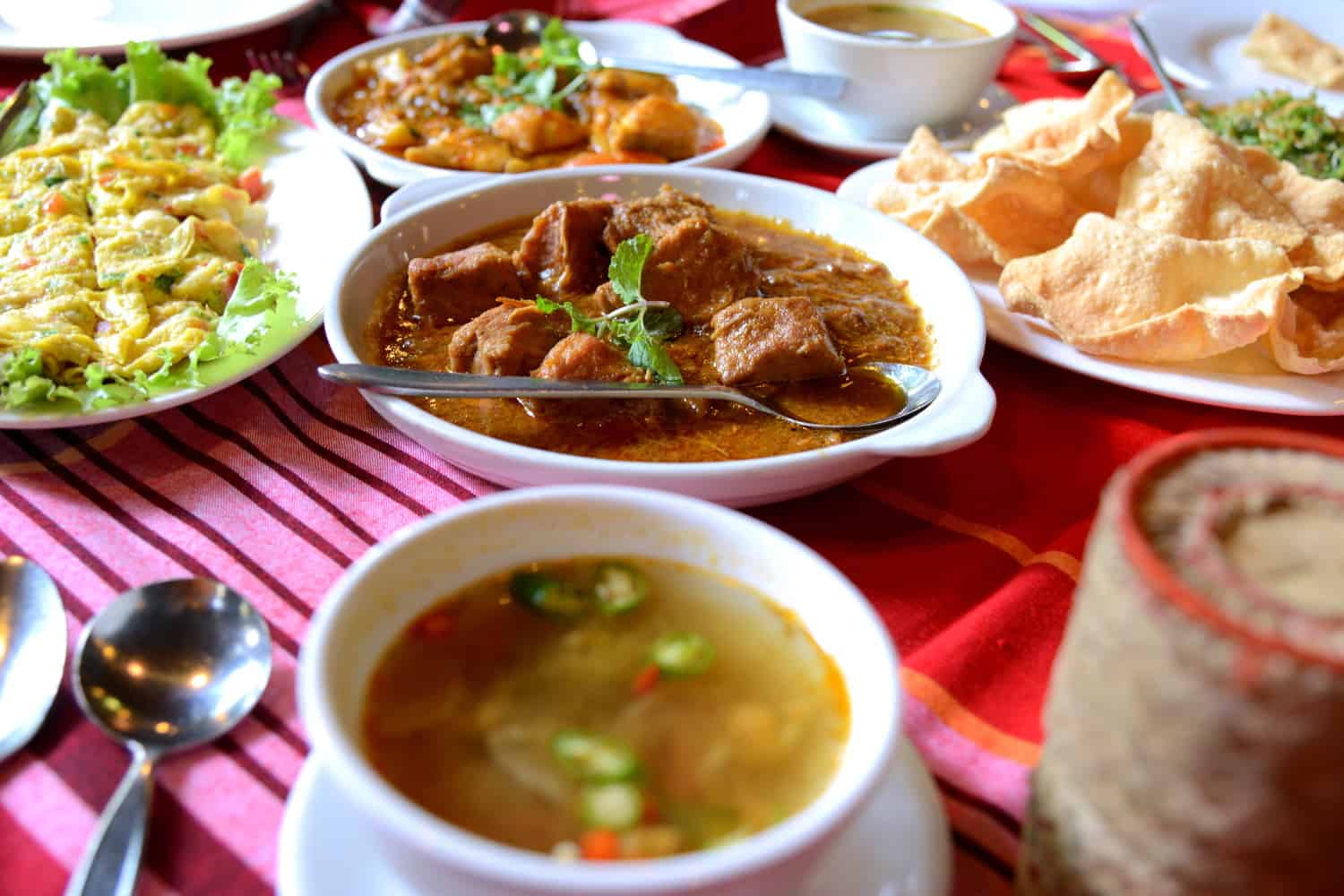 Probably the biggest influence on burmese cuisine is geographical, with coastal regions focussing on seafoods, and the inland hill country relying heavily on chicken and pork instead.

Outside of its national borders, food influences have come almost solely from Burma’s near neighbours – China, Thailand, and the Indian state of Assam in particular.

Join us as we explore the best traditional dishes waiting to be discovered in Burmese cuisine. 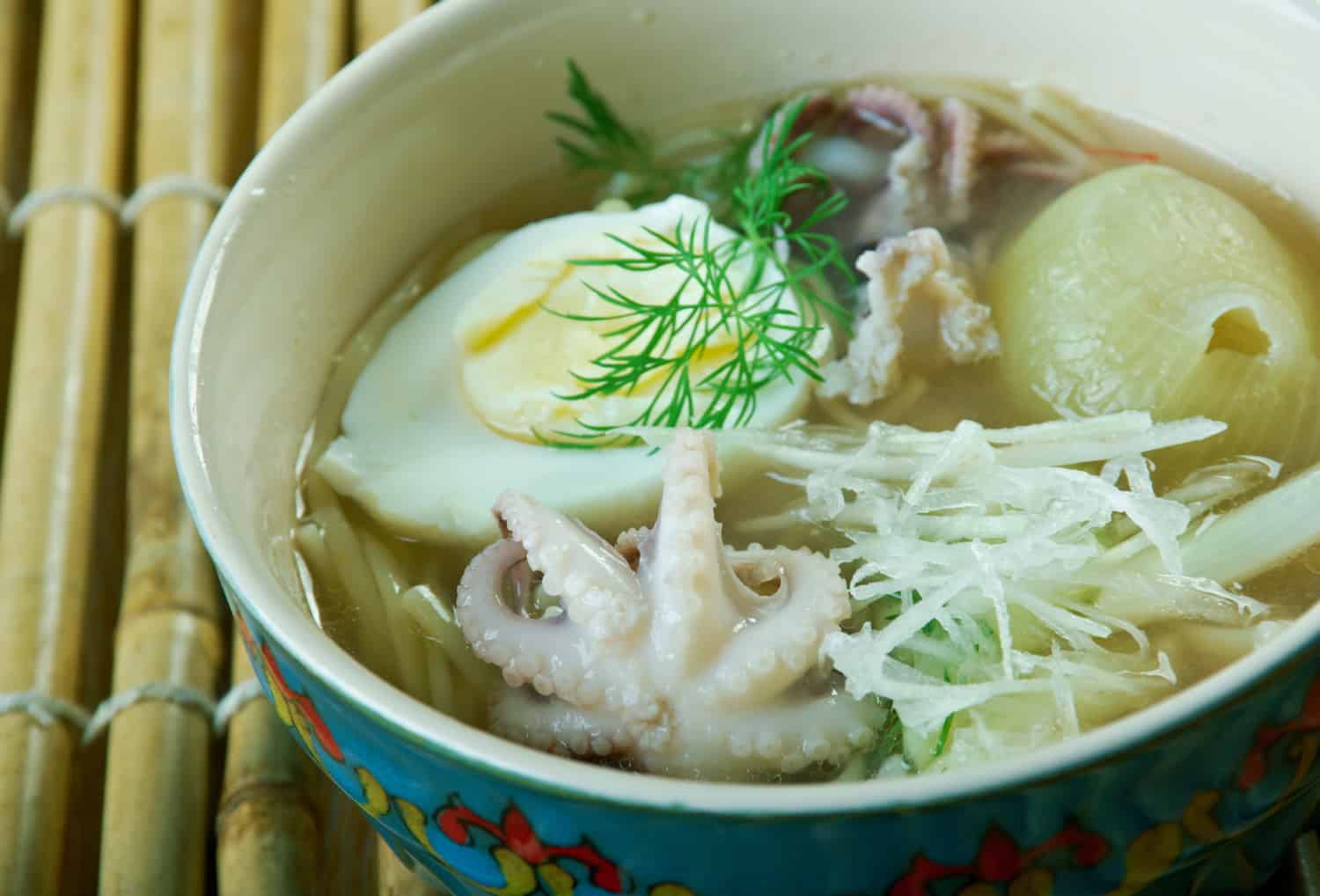 Mohinga is Burma’s traditional breakfast, although it is increasingly being eaten throughout the day. It holds such an important place within the country’s society and culture that it is also recognised as the national dish by many.

While those of us in the western world might take a little convincing to enjoy such meals so early in the day, the Burmese have no trouble in gulping down millions of bowls of this rice noodle and fish soup each morning.

Also known as mont or mont hin, the exact recipe alters from region to region. That said, the standard recipe you’re likely to encounter uses fresh fish. The pungent fish paste known as ngapi can also be used in various ratios of paste to soup liquor.

The resultant thin broth is also flavoured with onions or shallots, lemongrass and ginger. As well as the rice noodles, it can be also served with deep-fried dumplings and crunchy fritters made from chickpea batter.

Lahpet is a Burmese fermented or pickled tea. However, lahpet is unusual in that its leaves are eaten rather than infused to produce a drink.

A sign of hospitality and welcome, lahpet is usually eaten as part of a salad called lahpet thoke, or tea leaf salad.

The fermentation process can take up to four months to complete, with steamed or boiled leaves placed in an airtight clay pot or bamboo container.

In Mandalay lahpet, the leaves are placed in the central section of a divided plate, and surrounded by other ingredients. These include shredded coconut and toasted peanuts that are added to personal taste by the diner.

The more common version is Yangon lahpet, which sees the same ingredients as Mandalay lahpet added to shredded cabbage, beans, rice, or noodles.

Similar to pad thai, kat kyi kaik literally translates as ‘cut up with scissors.’ It comes from the coastal city of Myeik in the far south of Myanmar (Burma), and is a dish of fried noodles paired with a variety of fresh fish or seafood.

It gets its name because of the fact its main ingredients are traditionally cut into bite-sized pieces by the chef while they are being fried in a wok. It’s said that it simply makes the dish easier to eat.

The main ingredients of kat kyi kaik are slices of squid and whole prawns in addition to thick flat rice noodles.

Bean sprouts provide an alternative textural element, while much of the flavour comes from pepper, spring onion, and dark soy sauce.

In contrast, ohn no khao swè is a Burmese curried soup. The basis for the liquid part of this soup is coconut milk broth, giving it a rich taste with a hint of sweetness. It is turned into a thick ‘sauce’ by the addition of gram (chickpea) flour.

To this base is added pieces of curried chicken, and wheat noodles. In addition, it’s common to find this dish served with slices of raw onion, bean fritters, and segments of hard-boiled eggs.

The coconut flavour of the liquid can be given an extra sharpness through the use of fish sauce or lemon juice.

An alternative version of this dish, called shwedaung khao swe, turns it into a curry by using less of the broth to create each bowl.

Wet tha dok hto, or ‘pork on a skewer’, is a popular street food in Burma that is definitely one for the more adventurous to sample.

These skewers use pork offal as their primary ingredient, with ears, tongue, liver, and kidneys all used.

These cuts are first well cooked over charcoal or shallow-fried in a pan, before being simmered in a broth of light soy sauce, oyster sauce, Chinese five spice powder, ginger, and herbs.

Wet tha dok hto are then served with dips of chilli sauce and garlic.

These skewers are most common in Yangon, the dish’s birthplace. Small stalls provide space for diners to sit down and chat with friends while enjoying as many skewers as they like.

Danbauk is closely allied to the biryanis of the Indian subcontinent, and are usually cooked with either chicken or mutton. Its Burmese name refers to the fact the dish is cooked slowly.

Popular during festivals and family celebrations such as weddings, the chicken added to the danbauk is first coated in a special spice mix unique to the dish.

In addition, the rice takes on an aromatic flavouring through the heavy use of cloves, cinnamon and saffron.

A Burmese touch comes from danbauk being served with mango pickle, made from one of the nation’s favourite fruits, fresh mint, and green chillies.

‘Ambrosia danbauk’ instead features dried fruits and rice that is glossy with melted butter.

Burmese tofu, or topu, originates in the eastern state of Shan. It is made by combining water with yellow split pea flour.

The addition of brightly-coloured turmeric helps to explain why it has been given the alternative name of ‘yellow tofu.’

The flour and water mix is stirred over heat until it takes on a thick custard consistency. However, it doesn’t take on the firmness of traditional tofu until it is left to set.

Sliced into small stripes or cubes, topu can then be enjoyed as it is, as part of a salad. Alternatively, it can be deep-fried in oil and cooked until it has a crunchy outer coating and eaten as a snack.

It’s believed that hsan byoke made its way to Burma from China, since it is almost indistinguishable from congee, a form of savoury porridge made from rice.

Hsan byoke can be served plain, in which case it will be acting as an accompaniment to other dishes. It can also form a main dish, when shredded fresh fish, chicken, duck or pork provide the bulk of the flavour.

The texture of hsan byoke is mostly soft, since the rice is boiled in water for a long time, until it is breaking apart.

Meeshay is a Burmese dish of rice noodles covered in a meat sauce made from either pork or chicken.

Meeshay is accompanied to the table by mohnyin tijn. This is a type of pickle made from the greens of the mustard plant, carrots, and other vegetables that are fermented in a rice wine. It also comes with a clear chicken broth soup, and often tofu fritters too.

Meeshay is further flavoured with chilli oil, onions, and coriander.