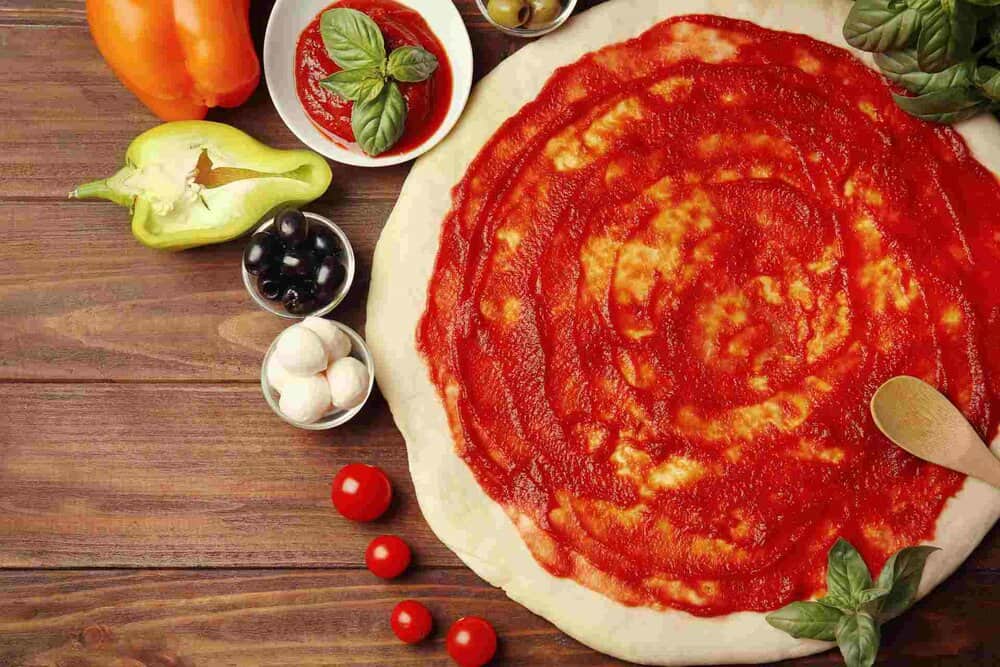 If you are making pizza and about to put ketchup on the pizza dough – stop right there.

Pizza sauce is not only traditionally used as a basis in pizza toppings, but it gives a distinguished and unique flavor to the whole meal.

Alongside tomatoes, many other herbs and spices are carefully added to give the full experience of pizza.

This article will review the best store-bought pizza sauce brands available on the market and what to consider when buying pizza sauce.

The taste of a pizza sauce not only depends on the ingredients themselves such as tomatoes, oil, and spices but also on their amount in the mixture as well as the type of ingredients being used. For example, organic tomatoes taste different than non-organic ones, and the same goes for herbs such as basil and garlic.

Some producers tend to keep the spices a secret, but it is usually to protect their specific taste from being copied. The amount of such ingredients also significantly determines the taste of the sauce – if you are a fan of garlic, then you will look for a sauce that has a dominant garlic taste for example.

Basil is also a prevalent herb used in pizza sauce, but not all of them, and its presence in the mixture gives a certain taste that consumers desire. It is also generally popular in the cuisine of the land where pizza in its present form roots from – Italy.

Saltiness and sourness (the sourness depending on the tomatoes mostly) is an important factor when it comes to taste, as some pizza sauces are saltier while others are not, mostly focusing on a refreshingly sour taste.

Olive Oil vs Other Oils

When most people think of Italy, they think of pizza, pasta, and olive oil. In this constellation, it seems that olive oil has an advantage over other oils such as corn oil or vegetable oil, but that is not always the case when it comes to the choice of consumers.

Despite being, generally speaking, healthier, having a taste that is distinctively kind of bitter, olive oil tends to be also higher in omega-3 than other types of oil, while corn oil, for example, has higher levels of omega-6. If you are willing to substitute this particular taste, some health benefits for lower omega-3, and less dominant oil taste, you might enjoy a product that contains another type of oil.

The cream of the crop or the sauce of the crop is Rao’s Homemade Marinara Sauce. It is a premium, classic Italian sauce that is made with fine Italian tomatoes, herbs, and spices such as basil, oregano, and garlic that are topped off with a bit of olive oil.

The taste can be best described as rich and smooth, without any ingredient being too dominant. Consumers are more than happy to pay a higher price than for most pizza sauces because of its clear texture and well-balanced taste, meaning it does not have any chunks of vegetables in it and being easy to spread on your pizza dough, as well as having just enough garlic to give it that Italian twist without being unpleasant.

The inclusion of olive oil and the fact that the sauce has no added sugar will delight those customers looking for a healthy and dietary solution to their pizza sauce dilemma. It also has no cholesterol and no gluten, making it consumable for people whose choice depends on these factors. A great all-round pizza sauce that has no tomato paste or tomato blend, just pure tomatoes inside.

The leader among canned pizza sauces, Don Pepino offers a traditional taste of old Italy with a touch of its other home in the United States, or more specifically in New Jersey where Don Pepino pizza has been prepared since the 1950s. Despite it being a canned product, it captures all the taste and keeps it fresh for when you need it on your pizza dough.

It contains no added sugar, no tomato paste but tomatoes themselves and no preservatives as well, which looks good so far for a canned pizza sauce. Regarding the taste, Don Pepino is regarded as not being too spicy compared to other pizza sauces on the market which is a plus in most consumers’ books.

Their spices are generally a secret on the packaging, but the true secret to the pizza sauce is the tomatoes which taste like they were just picked from the garden. Pizza lovers say it is what pizza sauce is supposed to taste like.

This pizza sauce uses corn oil in its recipe which gives it a slightly different texture and taste, and it goes well with the desired thickness of the sauce when it comes to spreading it over the dough, not making the dough soggy.

The Barilla brand is well-known across the world, especially in the United States and Europe, and its specialty is Italian cuisine . This, of course, includes its range of pasta sauces that can equally be used as pizza sauces. This packaging offers two types of sauces – traditional which is with savory oregano and basil, and the tomato and basil flavor.

Both can equally satisfy your taste buds, depending on which one you prefer. The main difference is the taste of course, which includes the herbs used in the sauce. Both are gluten-free and additive-free, so if this affects your choice you can use both.

Another difference between them is the texture – tomato and basil sauce has a more fine texture while the traditional sauce uses chunky tomatoes. The herbs in both are visible and you can immediately taste the difference with one bite, while having a refreshing taste that is not overpowering in terms of sourness, but it is a little sweeter than most according to consumers.

This is, however, not considered to affect their choice because the overall taste is something that keeps them coming back for more.

Barilla uses extra virgin olive oil in both its recipes, which is rich in healthy fats and omega-3 which tend to assist in weight loss and have other health benefits for the body. It is also an ingredient that goes well with any Italian recipe, and therefore it gives this pizza sauce a distinct taste.

In the past few years, the market for organic food has seen a rise and it has widened to all types of food including pizza sauce. Muir Glen Organic Pizza Sauce is a completely organic alternative to regular pizza sauce if you tend to buy your food from an organic producer. It is a pretty simple recipe – some nice organic tomatoes grown in California with a few organic herbs and spices.

The flavor of this pizza sauce is described as bright and bold, as well as rich and not too overpowering by consumers. Since the only flavors are natural, it has no genetically modified organisms (GMO’s) and the only thing you can taste is the sweetness of the tomatoes alongside the other herbs such as sea salt, onion, and oregano.

The recipe is complete with extra virgin olive oil giving it the distinguished taste and the sauce having a thickness to it that won’t run all over your pizza dough, but will stick pretty firmly to the parts where you have spread it. All in all a great choice for any pizza lover, especially those who take into account if a product is organic.

Although not being most known for its pizza sauce products, Maggi has been noticed by pizza sauce lovers for its fantastic product that uses sun-ripened tomatoes and a few herbs to offer a recognizable taste. Their pizza sauce is also gluten-free without added MSG’s.

Tomato puree is added to the tomatoes themselves in this pizza sauce, as well as the standard herbs such as garlic, basil, and oregano that give a traditional pizza sauce the flavor expected. The texture of the product is described as not completely smooth with a few lumps in it, but that does not seem to present a big problem for consumers since it is a very popular choice among them.

Taste-wise, this pizza sauce has a sweet, rich taste that comes in a big can, so it is a favorite on the shelves of those cooks who love tomato-based products. Don’t worry; you don’t have to use it all at once. You can store it in your fridge for about 5 days.

Unlike most of the products on this list, this pizza sauce includes sesame oil instead of olive or corn oil which differentiates its taste a bit. The choice is yours; this pizza sauce is definitely recommended.

As we said at the beginning, one of the first things that come to mind when mentioning Italy is pizza, and Cirio Pizzassimo sure does bring the real deal when it comes to their pizza sauce being an Italian recipe. This pizza sauce is made from 100% Italian tomatoes and is approved by the Italian Chefs Association – surely a group to trust when it comes to Italian food.

If that isn’t enough – this is an Italian product through and through. No GMO’s, no preservatives, just Italian pizza sauce as they make it.

It is thick and creamy with its combination of diced tomatoes and tomato puree that is sometimes a bit lumpy, but it is nothing to worry about according to consumers because the overall taste is fantastic with every ingredient being present in the mixture – sweet, salty and just spicy enough. Consumers also say that this is one of the closest things to home-made pizza sauce.

You would assume that olive oil is in the mixture, but this recipe uses vegetable oil which fits in perfectly with the rest of the ingredients. If you like your pizza sauce thick, chunky and flavorful, this would be a great choice.