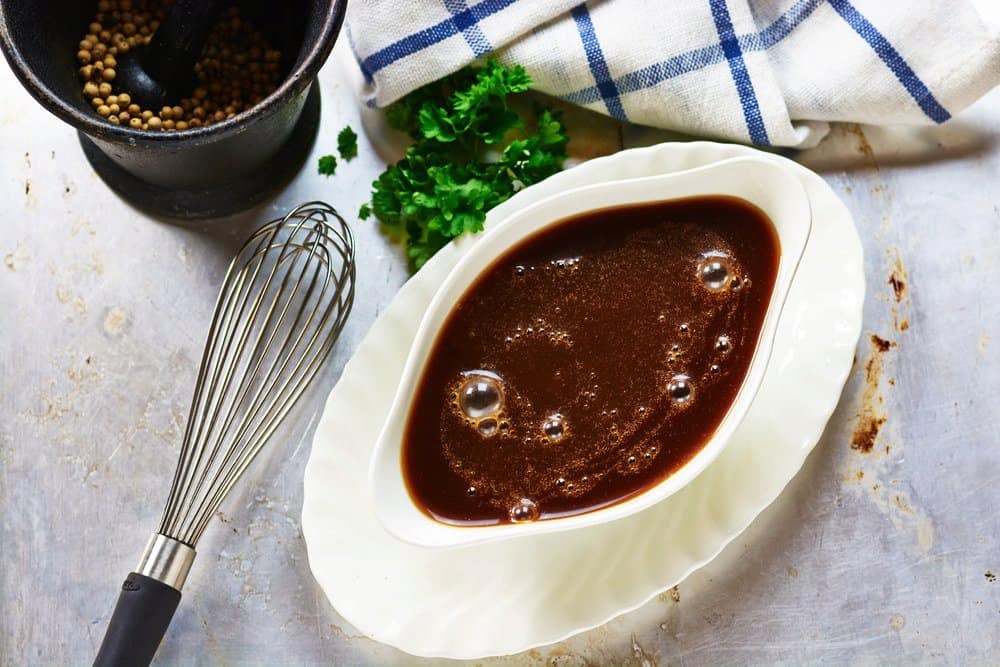 Gravy has been enjoyed across the world for centuries.

Simply put, gravy is made of cooked juices from meat with a bit of water and starch which form a sauce that can be put over anything from potatoes, beef, chicken, turkey, and even sausages.

Over the years, its cooking process has been simplified for your convenience, offering a lot of easy to make gravies at your disposal which are ready in just a few minutes.

Gravy is unlike most sauces where the thickness is sometimes a secondary thing because gravy is traditionally a thick and flavorful topping made from animal fat and/or meat base, however, vegetarian options have now been made available as well.

Thickness is along with flavor considered the most important factor when buying your gravy because watery or runny gravy is considered low quality and simply does not look as good on your plate as a creamy thick layer of one does.

Taste can sometimes be connected to the thickness, since it may show the ratio of meat-based ingredients which give a certain flavor that gravy lovers look for, and other ingredients such as spices, water, and additives. Buyers tend to trust thicker gravies but that does not mean that a better taste is guaranteed.

There are different gravies on the shelves of supermarkets that offer to resemble the taste of a certain type of meat – it is most commonly turkey or beef. When buying gravy, customers usually look for the best match to the type of meat on the packaging, but it is not that simple.

Alongside this factor, other ingredients play an important role as well when it comes to taste – herbs and spices used and their intensity. Sometimes customers look for a certain sweetness or saltiness of gravy to soothe their taste buds, without any of the tastes being overpowering.

Knowing the ratio and formula for a perfect gravy is an art to some extent, and the preferences of customers range from those who find a gravy too meaty, while others prefer an intense meat flavor.

The McCormick brand is a popular choice among buyers and its products can be bought in over 150 countries around the world, making this gravy available almost everywhere. They are also a restaurant favorite; with many restaurants using it. It comes in a pack of 2 – poultry gravy and brown gravy.

The poultry gravy is intended for combining with chicken and turkey while the brown gravy is best suited for beef, onions, and mushrooms. On the back of every packaging, there are recipes for you to try at home and recommendations on how to combine your gravy with your meal.

According to customers who have tried both flavors, this gravy is considered just right when it comes to thickness and taste. They enjoy the fact that the gravies are not too salty and have a good texture, preferred alongside with the recommended recipes, with mashed or whole potatoes.

It is recommended as a quick and efficient alternative to home-made gravy because it shortens the time needed to prepare while maintaining the original taste which is important when it comes to this type of gravy. It is also recommended in a combination with your favorite home-made recipe, simply by adding one of the gravies into the mix which adds to the flavor and texture of the one you are preparing from scratch.

As the name says, this gravy is made from organic ingredients including cocoa powder, garlic, onion, beef flavor, and many more. If you are searching for that flavor “from scratch” as well as texture, this would be a great choice. It is recommended for beef dishes, along with potatoes, or simply just using it as stock.

Also, if you shop for organic food which means that the entire process of the production is documented and performed without artificial additives, this is the gravy you are looking for. In terms of thickness, the producer of this gravy guarantees “robust” texture, so it should be a thick layer of gravy on your favorite meal.

The term “brown gravy” most commonly means beef-based gravy and this is certainly it, with beef stock being its base. The many herbs and spices made organically do however contribute to the level of taste according to customers.

Although delivering the taste it promises on its packaging and is made from organic ingredients, buyers tend to recommend adding a bit more flavor to this gravy just to give it an extra kick. If you place organic ingredients over strong taste and spiciness, this would definitely be the choice for you.

Most gravy products tend to have a meaty taste with spices and herbs that usually contain garlic. However, there are people who simply do not like the taste or smell of garlic, and they are in luck when it comes to the choice of gravy.

Southeastern Mills offers a customer’s favorite roast beef gravy mix which is recommended to top any of your favorite meat dishes. Concerning thickness, it guarantees a thick texture that will give a rich topping to your beef or any other meat dish.

Regarding the taste, customers consider it to have a dominant beef taste as the labeling says, but also a well-rounded combination and dosage of herbs and spices which satisfy the average consumer. If however, you desire stronger, more intense gravy, then it is recommended to add a few your own spices to the mix to get that punchy flavor you are looking for.

The garlic factor is also recalled by buyers who are not the biggest garlic fans, considering this gravy their favorite due to the fact that garlic in most cases overwhelms all other tastes and smells in a gravy mix, which is of course not the case with this product.

Online you can find a lot of debates about UK vs US gravy, but some of them are just based on familiarity. Holding a strong position for the UK, Bisto Beef Gravy takes pride in offering a traditional UK taste of gravy around the world. It offers an old and proven recipe of home-made gravy just by either pouring hot water over the granules or boiling them in the pot together.

Consumers rate it very highly; especially those who grew up enjoying it and now live outside the UK, bringing back memories with the specific taste it offers. There are also no meat products in this type of gravy, meaning it is suitable for vegetarians.

The recommended recipe going alongside it is a meat roast, but if you are a vegetarian most consumers mention it being delicious with potatoes as well, so no need to worry about that.

Apart from being very tasty, if you combine the recommended amount of water with the granules you will get nice thick gravy ready for serving in about 10 minutes. Another interesting remark by people who are big fans of this product is that you can put it in the fridge and then reheat it, without the gravy losing its smoothness, texture, or taste. Not bad for a quick gravy option, is it?

Another McCormick product, their turkey gravy is another stand-out gravy product that has a smooth taste perfectly complementing your turkey roast. Having no artificial flavors, it brings richness and original taste to your dining table in just 5 minutes. Simply mix it with some water and let it simmer to get the full flavor and thickness out.

Just to note, consumers recommend preparing it over the stove despite the fact that you can also prepare it in a microwave oven. Microwaving it resulted in a thinner structure of gravy, while the stove option was the real deal. This also, of course, depends on the quality or type of microwave oven you have in your kitchen. The recommended combination is with potatoes, turkey roast, or over the stuffing itself.

The taste is considered to be that of turkey stuffing, which is what most consumers look for in turkey gravy. McCormick takes pride in its spices catalog, and they are also used in their gravy. According to consumers, the saltiness is just right, but that again depends on your preferences.

Also, it is not recommended to leave it overnight because it may lose its thickness, becoming a bit runny. Despite this, it is a very popular option to buy.

Having over 150 years of tradition, the Pioneer company from Texas has been preparing gravy maintaining original recipes that have traditionally been on dining tables of gravy lovers. One of their popular products is the Country Sausage gravy that is thick and creamy, with a sausage taste that leaves out artificial flavors, and it has taken the taste buds of consumers by storm.

Their focus is on home-made taste, which brings that southern spice to the meal you choose pouring it over. Regarding its thickness, customers tend to substitute water for milk or cream giving it an extra density and texture, but the choice is yours.

The taste is resemblant of sausage as it promises – no dilemma there. This is probably the reason, along with the longevity of the brand itself in the production of gravy, why this gravy is so popular among customers. The conversation is rarely about the gravy itself, but what to serve it with. Recipes range from any kind of chicken meal, mashed potatoes, and of course sausage.

Other recommended combinations are with eggs (boiled or fried), biscuits, and pork chops. Undoubtedly popular and apparently going off the shelves quickly, so grab a bag for yourself before somebody else does.