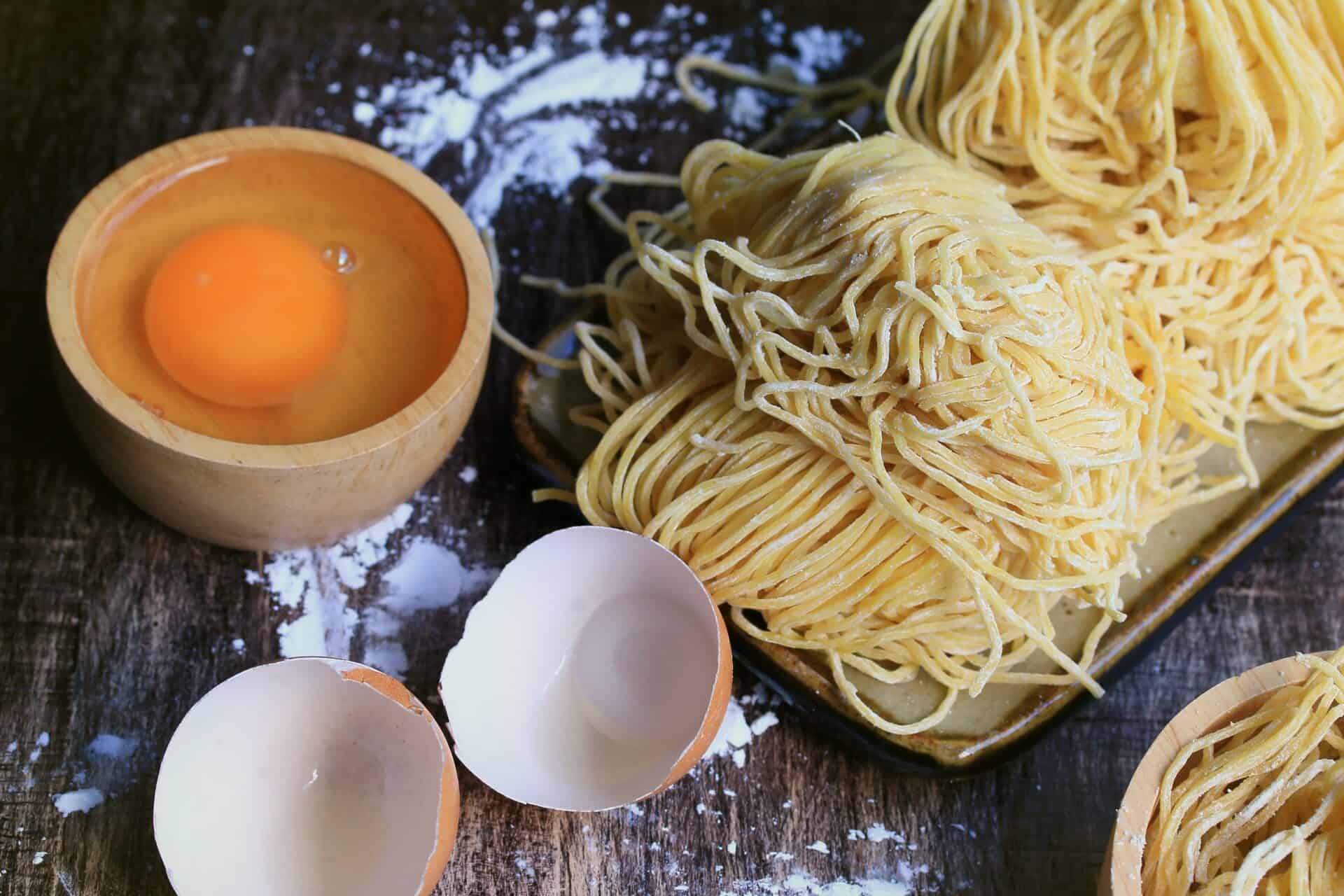 Egg noodles are one of those things that are incredibly simple and found in an incredibly large number of dishes in pretty much every single part of the word.

Go anywhere on this planet and the local cuisine is likely to feature some variation of egg noodles. They are really easy to make at home but many would rather pick up a pack at the store and use the time they save to do something else instead.

This article will review the best egg noodle brands and what to consider when buying egg noodles.

Every culture has its own preference for egg noodles in terms of their length and style.

The reason behind this are the dishes that different cultures primarily used egg noodles for before they encountered other distant cultures.

This is something you’ll have to either eyeball or figure out through trial and error since the information isn’t printed on the box.

Even with something as simple as egg noodles, you should never underestimate the ability of the modern food industry to add artificial ingredients.

The main artificial ingredients you could encounter in egg noodles are artificial aromas/colors and preservatives. You might also want to look out for GMO ingredients.

Artificial colors and preservatives aren’t necessarily unhealthy but you should always check the full ingredients list and do your own research.

Also, never go for artificial ingredients that aren’t approved by a reputable regulatory body such as your country’s food regulatory agency or the US FDA.

GMO is a matter of personal preference mostly and many people choose to avoid GMO foods. Products that are GMO-free will often proudly display that fact on the label so you should have no trouble identifying them.

They are made with the best durum wheat semolina and eggs that are cracked fresh daily, so you can rest assured that you are getting a quality product here.

The packaging is very simple with a clip that is used to quickly and easily close the bag and save the remaining noodles for later. Let’s be honest, the packs are huge and it won’t be that easy for you to use the entire thing at once.

If you’ve ever made noodles at home, they probably turned out similar to the Riesa ones. One advantage of thin noodles like this is that they prepare super quickly and customers have praised them for their exceptionally low cooking time.

If you want good, low-fat noodles that can be prepared in a hurry, look no further since Riesa’s got you covered.

If you want soup noodles, that’s Riesa’s territory but for those of you who are in the mood for some stir fry should look no further than the Blue Dragon Medium Egg Noodles. There are several key things that separate them from the thinner Riesa noodles.

For starters, they come in a smaller packaging of exactly 100 grams. This is the equivalent of two servings according to Blue Dragon.

The shape is also different since these noodles are not only wider, but they are also somewhat flat instead of round.

There is no clip closure on the bag but you can use an adhesive tab to reseal it once it has been opened. No artificial colors are found among the ingredients.

Even if a soup isn’t their main destination, plenty of customers have added them to their soups and liked the results so feel free to experiment a bit and see what works for you and what doesn’t. After all, that’s the best way to make some great discoveries in the kitchen.

Fans of wide noodles were probably disappointed with the width of the first two entries on this list and we can’t blame them much. Don’t worry fans of wide noodles because you’re bound to love this next entry. The Bechtle Traditional German Egg Noodles Broad Noodles are not only the widest noodles on this list by far, but they’re also the definition of a premium product in the field of egg noodles.

The ingredients list is completely GMO-free and the eggs used for the noodles come only from chickens that aren’t kept in cages. These come in large packs with 12 packs per box so you’re not running out any time soon. Since we’re talking about large packs, storage after opening is an issue that needs to be covered.

Fortunately, there is a clip that you can use to close the pack once you open it which makes it easier to store the noodle without concern about spillage. You can use them for just about anything, from soups to salads and many customers have agreed that the Bechtle Traditional German Egg Noodles Broad Noodles are by far the best egg noodles they’ve found on Amazon. With an endorsement like that you absolutely can’t miss them.

Mrs. Weiss Kluski Egg Noodles are wider than any other noodle on the list but still much thinner than the abovementioned Bechtle Traditional German Egg Noodles Broad Noodles. These Polish noodles have a really retro look and feel which is common with all products from this brand.

They are great at soaking up flavors from a broth or a thin sauce and this makes them a viable and tasty addition to basically any time of dish possible regardless of its type or country of origin. If you want a true one size fits all noddle, you’ve found it. They also provide a source of iron, riboflavin, and niacin and they contain low levels of sodium and fat.

There are no preservatives inside, the ingredients are MSG-free, and the noodles are Kosher certified.

With 16-ounce packs, you will be getting a lot of noodles and with three packs per bag, you’re getting enough for anything you need but not too much.

You probably won’t run into a scenario where you have bags of noodles collecting dust in storage because there are too many.

One of the only knocks of these noodles is the packaging that doesn’t seem to feature any way to close the bag after opening.

You’ll have to use a paperclip or a clothespin after you open the bag but that shouldn’t be much of a hassle, especially when the noodles are so tasty.

In terms of flavor, the MANISCHEWITZ Kluski Egg Noodles have been described as the closest you will ever get to home-made noodles without making them yourself.

This should be enough of a reason for you to order a pack right now but we still have more to cover. The pack size is 12 ounces and there are 12 packs per box. That is enough noodles to feed a lot of people.

Just like with the Mrs. Weiss Kluski Egg Noodles, you will need “external tools” to help you close a pack once you open it if you don’t use the whole twelve ounces at one.

If you can get over that and you’re not a fan of very wide or round noodles, the MANISCHEWITZ Kluski Egg Noodles are probably the best you can get on Amazon.

This list of the best egg noodle brands should have something for everyone’s taste.

Fortunately, there are plenty of good options on the market and you’re bound to find something you like.

Any of the egg noodle brands featured on this list will give you a quality product that you are sure to enjoy. It’s only up to you to decide what you like best.