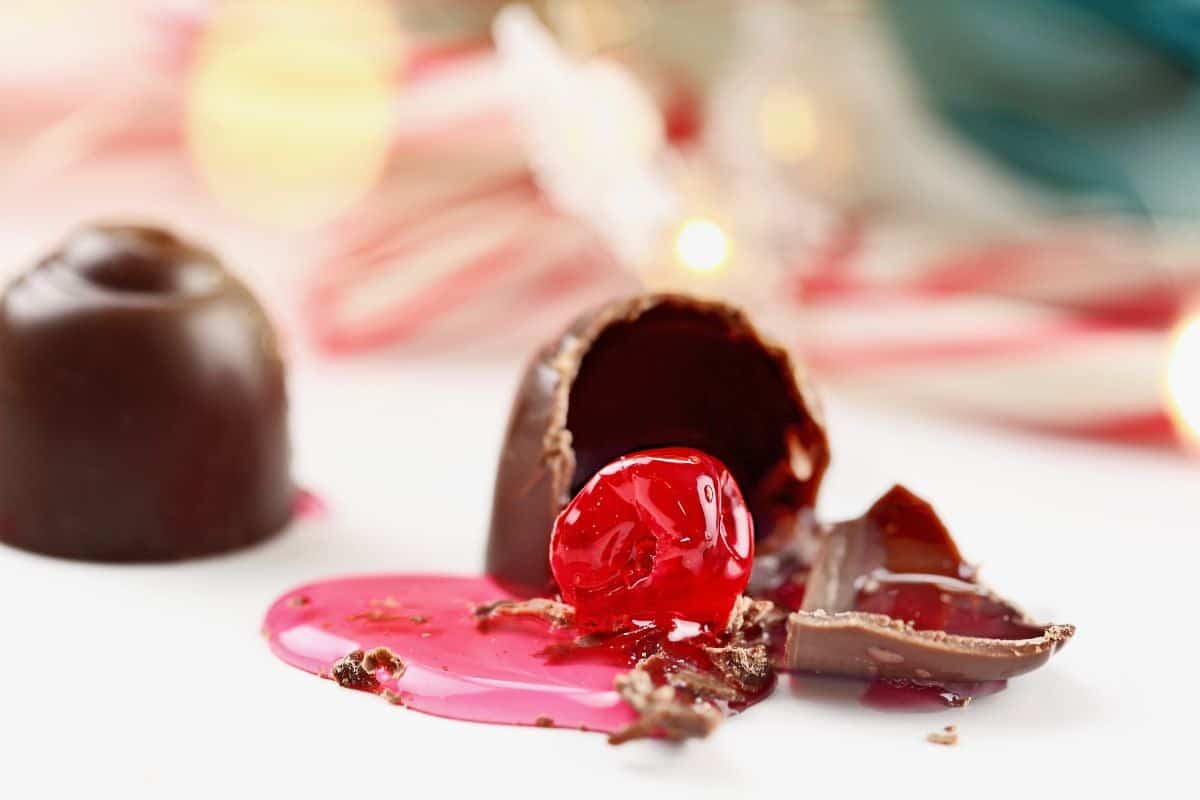 Chocolate covered cherries are a real delicacy to those who have a bit of a sweet tooth.

They are traditionally a nice present for the holidays such as Christmas, as well as birthdays and anniversaries. They have been a popular present through the years for Valentine’s Day as well.

Chocolate covered cherries come in a variety of chocolate, and one of the main differences is dark or milk chocolate.

Let’s start with dark chocolate – it is considered to be pretty healthy by most nutritionists as it has a variety of ingredients that stimulate the body. Antioxidants levels are usually the most mentioned nutrients in dark chocolate, as it is one of the best sources for them. Antioxidants protect your body’s cells from harm that can lead to heart problems or other diseases.

Dark chocolate can also contain high fiber levels, iron, copper, and other minerals such as zinc and phosphorus. The “secret” ingredient in dark chocolate is actually the cocoa which is a major component of it, usually around 70% of the product.

Careful intake of dark chocolate can improve your blood pressure, reduce the risk of heart disease, and improve your skin and cognitive processes within your brain.

However, the taste of dark chocolate is mostly not as satisfying as that of milk chocolate which is more popular, but we will get to that in the following paragraph.

Milk chocolate has a substantially lower level of cocoa in its ingredients, while milk is added either as a liquid, condensed or powdered.

Dark chocolate has a stronger, less sweet taste than milk chocolate, but is healthier in general. The choice is yours.

Cherry Republic is a company from Michigan which was founded in 1989 that specializes in cherries and cherry-related products – including chocolate-covered cherries. This product is mainly made with milk chocolate and their very own Michigan dried cherries, claiming to have just the right balance of sweetness and a distinct tart flavor.

The taste is described as sweet enough, the chocolate standing out as well the cherries themselves which have a rich chunky taste. They are considered different from other products because they do not have the typical form of chocolate-covered cherries – no wrapping around every individual cherry but a bean-like shape and they come in a bag.

Consumers take to the smooth taste of the product and the cherries themselves that are inside. Some of the potential cons include, like most of the products on this list, delivery, or more specifically the handling of the product during delivery. Customers have been noted to say that the cherries were melted or damaged upon delivery, especially to further destinations, so keep this in mind.

Trader Joe’s is a company that takes pride in delivering quality goods to its customers since 1967 when they got their name which is the same today.

The only dark chocolate cherries on this list, the product offers a quite basic, self-explanatory packaging and labeling, which contains dark chocolate covered cherries without any additional flavors or colors.

Dark chocolate and dried cherries, with a few extra non-artificial ingredients – sounds good. Dark chocolate is a choice made by those who enjoy pure cocoa flavor as well as the health benefits mentioned in the considerations part of this review. These chocolate-covered cherries are just that, with the dominant cocoa flavor of the dark chocolate dominating the cherry part.

Those customers looking for this taste are absolutely satisfied with their purchase. This is a take-it-or-leave-it product, meaning that you either love them or you are not a big fan, simple as that.

According to customer reviews, dark chocolate fans praise them for their taste and healthy ingredients, while others are mostly dissatisfied with the packaging that sometimes makes the product melt and dry out.

They are probably not a good choice for those who plan to keep them for a long time due to no artificial ingredients that keep them fresh but are the perfect choice for those customers who want a product that contains all the nutrients of chocolate (cocoa) and cherries.

These milk chocolate covered cherries are firstly placed in a clear liquid, and then they’re dropped in real milk chocolate to give them a genuine taste.

Consumers say that, apart from being sweet which is what you expect from this product, they are not overwhelmingly sweet and keep a distinct taste for the two main ingredients.

When biting into these chocolate-covered cherries, the full enjoyment comes from the taste of the liquid inside the chocolate, then from the combination of the milk chocolate itself along with the cherry.

According to those buyers who enjoy this product, it does tick all the boxes mentioned. One of the main pros of this brand is consistency – many buyers who have bought this product over the years say that the taste and quality has not changed a bit.

Although the taste is something that is generally praised by consumers, problems arise when it comes to health recommendations regarding sugar levels. This product is not alone – it is not intended and recommended as a usual meal, but something to enjoy occasionally.

All three products give pretty much what they promise, and are able to offer something for everybody’s taste buds.

The two milk chocolate options are popular among those who look to this product as a “cheat” meal, while the dark chocolate option without artificial flavors is for those customers who take note of what’s inside.