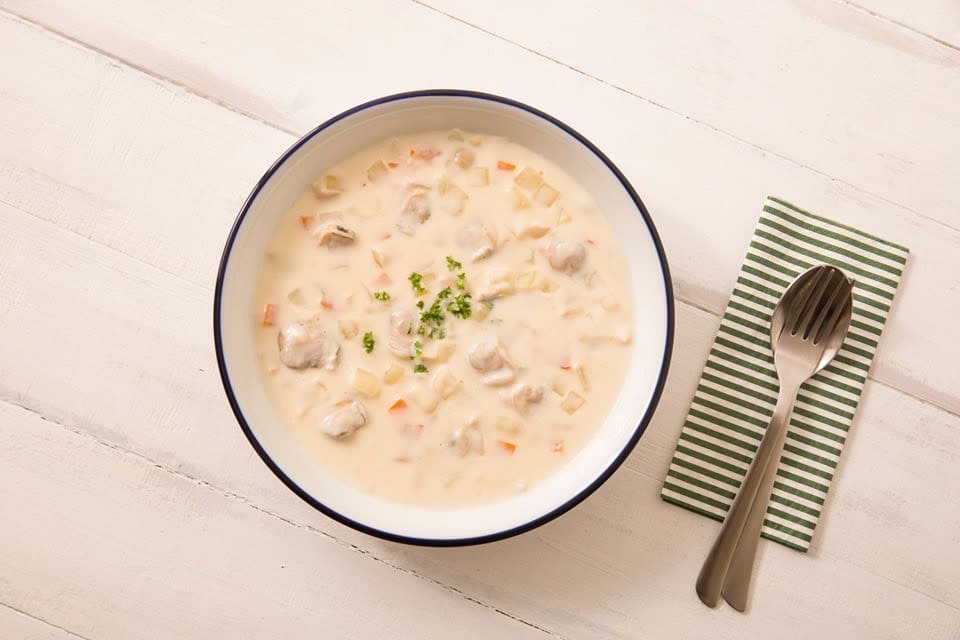 Clam chowder is a dish most commonly served as a soup, and of course, it consists of, as the name says – clams, plus a few extra ingredients such as milk or different kinds of broth.

Other ingredients may be added to give it extra flavor such as potatoes, onions, or other vegetables depending on your preference.

If you are on a protein diet or simply enjoy high protein foods, clam chowder is a good choice for a meal because it usually contains a very high protein level. Proteins are important for your body’s health and help the regeneration of your muscles, hair, and bones, meaning they are crucial to a well-balanced diet as well as being a good basis for your body’s development.

Clam chowder usually has about 3 grams of protein per 100 grams, of course depending on the brand and type.  The types we will be reviewing range from 4 to 5 grams per serving.

Clams are naturally rich with protein, and the quality of clams can often depend on their protein level as well as their chewy texture. Generally, they are low in fat but high in energy making them a popular choice for healthy eating.

As mentioned in the introduction, clam chowder recipes vary – from those that include onions, potatoes, or other ingredients that of course affect the taste of the whole product. The clams used determine the taste as well, as do the herbs or spices in the recipe.

There is also a discussion about white or red clam chowder among those who enjoy the dish, but it mostly depends on what you are used to, so we’ll leave that debate out. Tastes vary, and they will be described according to the ingredients as well as the general taste of the clam chowder being reviewed.

The company Bumble Bee Seafood takes pride in a 120-year history and its founders being local fishermen. Their primary production is of course seafood, and they seem to deliver most, if not all of the time. Their clam chowder is focused on high-quality ocean chopped clams and is recommended for soups, sauces, and pasta.

The protein amount is 4 grams per serving, giving it the least protein amount out of the three clam chowders being reviewed, but the clams that are used are harvested by the company themselves which is not that common.

Although there are a bit fewer proteins, this product is gluten-free which means that those suffering from allergies to gluten can also enjoy it, but it also means that it makes you gain less unhealthy weight.

Taste-wise, this product is pretty basic in terms of spices and other ingredients. This is not a bad thing, you can and are instructed to add your own twist to it, but the basis is there and it is prepared in minutes. Their most popular use is in clam chowder and specifically New England clam chowder for which you can see a recipe on the can.

The taste is described as “authentic clam” – so those who enjoy the classic taste of seafood without too many additions will love this.

As a company, Sea Watch has a 35-year history and is a clam supplier from Maryland. They advocate and engage in sustainable fishery, meaning that harvesting is done in a manner where the fish and other species have time to reproduce in a sustainable manner. Their chopped sea clams are freshly chucked and are a good basis for white or red clam sauce, as well as clam chowder.

Regarding proteins, 5 grams is the amount per serving which is relatively high compared to other products on the market. The product is a great basis for a protein-rich meal any way you serve it and can be a good source for proteins for those customers who are looking to lose a few pounds while tightening some muscles on the way.

Proteins are not the only nutrients good for you in these clams – there is also a pretty good source of iron in there. This product is similar in terms of ingredients as the aforementioned one – it contains sea clams without many spices to it. This means that you will need to do a bit of work if you want to prepare a more complicated meal than just enjoying clams as they are.

According to customers who enjoy this product very much, it is a perfect ingredient for New England clam chowder with its very meaty, chewy clams and strong clam flavor. Although tasting “clammy” as some say, the taste is not overwhelming and can be enjoyed by those consumers who are in it for the nutrients as much as they are for the taste.

Campbell’s is a soup company based in New Jersey and is a very familiar name among soup customers. The company was founded in 1869 and has been producing soups that have been enjoyed by consumers ever since. Their New England Clam Chowder is labeled as a healthy product, especially for the heart and recommended after physical activity.

If protein amounts are what they are talking about, they would be right. A good, healthy 5 grams of proteins are inside one serving and can benefit your heart (with it being a muscle) as well as other organs. Apart from the protein level, this product is a pretty good source of iron, calcium, and potassium.

One of the few deficiencies regarding health is the sodium levels which are a bit higher than the other two products, but that probably has to do with the other ingredients inside which we will get to. Regarding the ingredients and taste of this clam chowder, it differs from the others mentioned above by including clam stock, potatoes, celery, cream, and other ingredients that make up a pretty tasty meal.

Obviously, this has everything inside and there is probably no need to add anything. If you are looking for a quicker option than the others, this would probably serve you well. According to consumers, quicker is not necessarily better. Due to other ingredients, there is fewer clams inside and the taste doesn’t seem to satisfy those looking for a salty, seafood meal.