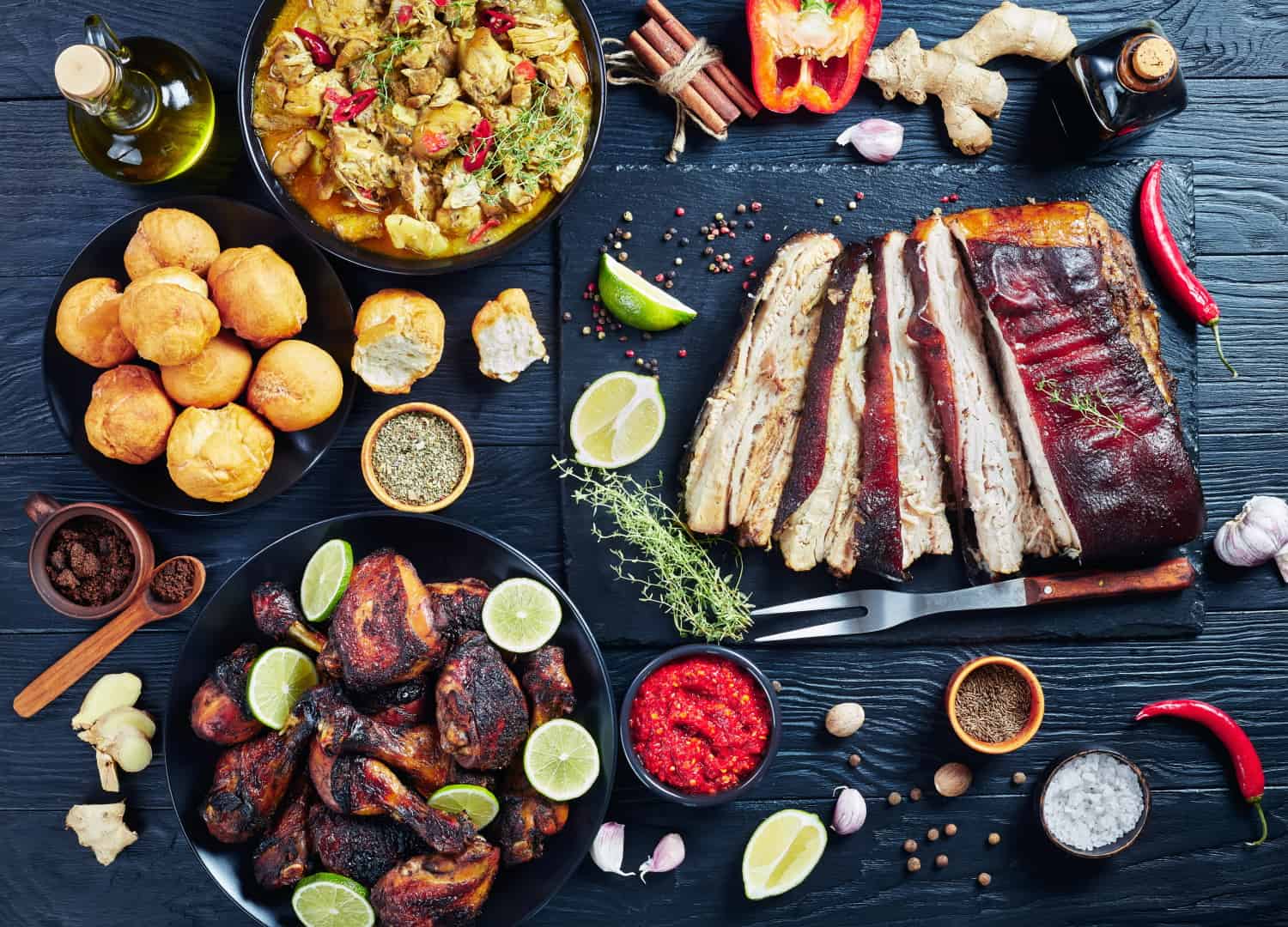 While small, the island of Barbados takes influences in its cuisine from African, Indian, and European nations alike. This is in addition to the centuries the country fell under British rule.

Part of the Lesser Antilles in the eastern Caribbean, and surrounded by teaming seas, fish plays a major role in the diet of Barbadians. Main meals usually consist of freshly-caught fish or meat marinated in herbs and spices together with a variety of carbohydrate sides and salads.

If you’re having trouble seeking out anything authentically Barbadian on a menu, look out for the word ‘bajan’.

We guide you through the top traditional foods of Barbados so you know exactly what to look out for. 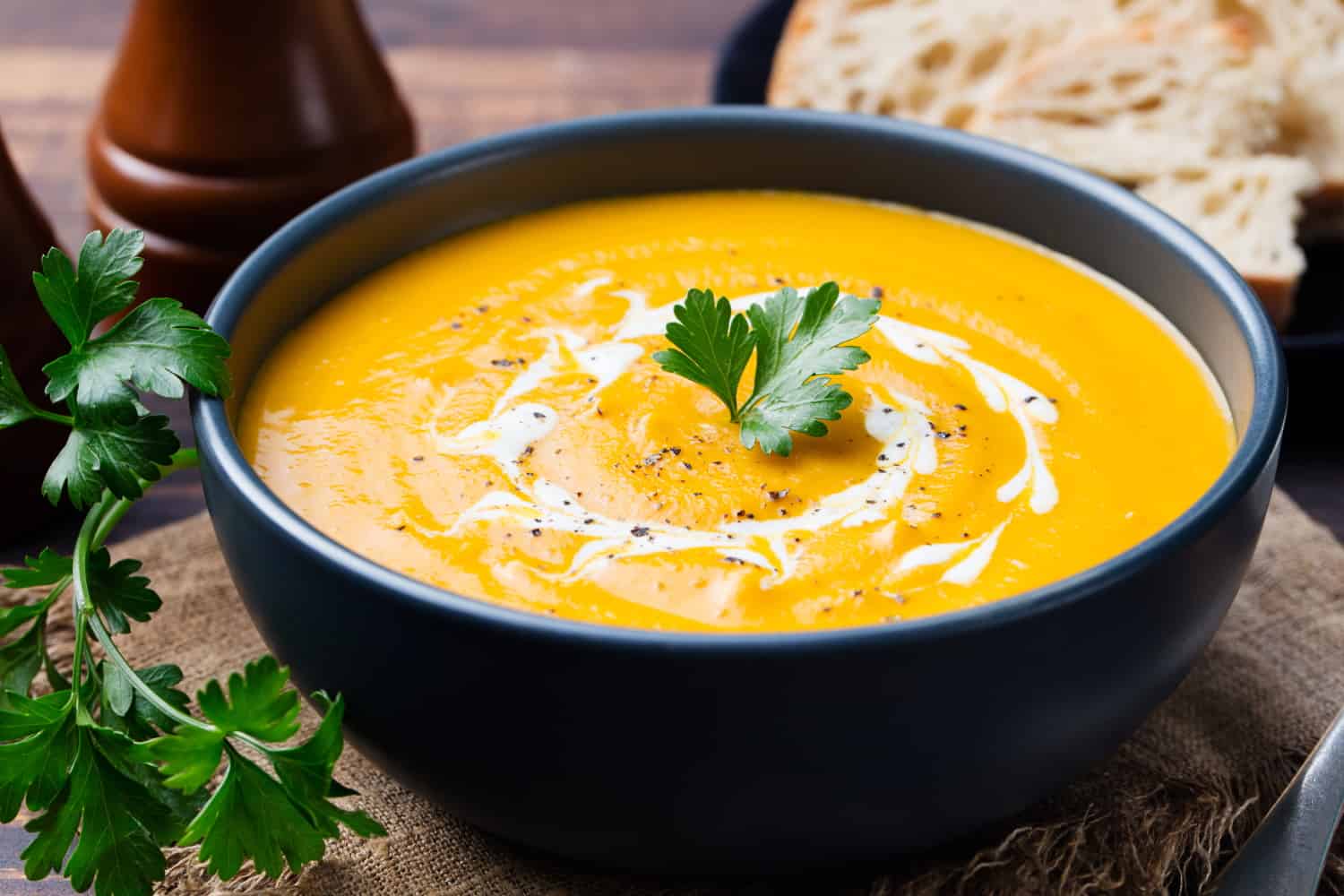 Head to Barbados and you’ll soon discover that there is more than the standard orange Halloween pumpkin on offer.

Varying in shape and colour, the country’s pumpkins are generally split into two types, the garden pumpkin and the belly pumpkin.

Garden pumpkins are usually turned into fritters because of their creamier texture, while belly pumpkins are more fibrous and so they are used in soups and stews.

The island’s pumpkin soup recipes generally also include split peas (lentils), onion, and bacon cooked down with chopped belly pumpkin until it’s soft. The pot of ingredients is then blitzed in a food processor or with a stick blender to create a thick, smooth texture on the spoon and the tongue.

A dessert dish that almost certainly began life in Europe if not Britain specifically, coconut turnovers are an island favourite and can be found in bakeries in pretty much every town and city.

Unlike European sweet turnovers that are a pastry sandwich filled with cooked fruit or jams (jellies), the Bajan version is a little more like a filled doughnut.

Cutting one in half, you’ll find the centre a combination of soft fluffy bread and a filling mix. This mix is made by adding allspice and ground cinnamon to almond essence and grated or shredded coconut flesh.

Unlike modern filled doughnuts, the coconut filling is added into the dough before cooking. They are also normally backed in an oven rather than deep-fried.

It is thought that the heritage of conkies on Barbados originates in both Britain and modern-day Ghana.

First used to celebrate Guy Fawkes Night on November 5th, which marks the failed attempt to blow up England’s King James I, the conkie seems to derive from a similar Ghanaian dish called kenkey.

Conkies are dumplings made from corn flour (also known as corn meal). They are flavoured with all manner of local crops including pumpkin, coconut, and spices. Sugar – also grown on the islands – provides additional sweetness, alongside raisins and a type of cherry native to the island.

The mix is wrapped in a banana leaf and then cooked until ready to serve.

Conkies are eaten hot, and today are available throughout November to celebrate the island’s Independence Day on 30th of the month.

It’s a strange sight to first see a fish launch itself out of the water and skim the waves for what seems like an impossibly long period of time.

And it’s a sight you can see a lot in Barbados, the so-called ‘land of the flying fish.’

The species is so regularly caught by the island’s fishermen that together with cou-cou (also spelt coo-coo) it forms the national dish. Tasting similar to a sardine, but significantly larger, the flying fish is fried.

The second component, cou-cou, is a mixture of corn flour and okra. Without the okra, it takes the name fungi. It is served together with the flying fish and a spicy gravy.

No, we didn’t get the words ‘wrap roti’ the wrong way round. Nor is this Bajan dish a simple roti. Instead, wrap roti is the name given to a curried stew that is wrapped tightly into a roti in a similar way to a burrito.

The stew will normally contain a meat together with potatoes. Red meats like goat and beef are preferred, as they don’t dry out while being cooked, although chicken and even conch versions of wrap roti exist.

The roti was brought to this region by immigrant workers from southeast Asia, although the wrap is first recorded only in the 1940s as a more convenient way of consuming both curry and roti while on the move.

The larger cousin of the sweet banana, plantain is always eaten cooked in one form or another. One of the most popular ways is to slice the fruit into sections of about a centimetre and shallow fry them.

The heat of the pan turns their pale flesh a beautiful golden brown, and begins to convert the sugars within the slices to provide sweet notes to this otherwise starchy ingredient.

Plantain can also be baked in an oven until the flesh turns soft, or mashed and made into plantain fritters. Some on the island are also known to wrap bacon around a stick of plantain to create a flavour profile similar to North American maple syrup and bacon.

Although they don’t have any specific local name other than ‘fish cakes’, it makes this dish no less traditional.

Interestingly, fish cakes are actually a traditional breakfast meal, as well as an appetizer for main meals.

For breakfast, the fish cakes can be enjoyed at table, or prepared in a sandwich of salt bread, in which case the two together become known as ‘bread and two’.

When it comes to the fish used, it is normally salted cod, which provided a way of storing fresh fish before modern refrigeration became commonplace.

A long-held tradition has Barbadian families enjoying pudding and souse on Saturday lunchtimes.

The ‘pudding’ part of this dish refers to steamed sweet potato, which in its most authentic version would be served rather like a sausage inside a skin of pork intestine.

The ‘souse’ refers to pork. Today, the meat added to the dish is normally a standard cut of pork. Historically, souse is known to have been prepared using off-cuts, in other words, the trotters, tongue, ear, and even the pig’s snout.

Chunks of pork are boiled in salt water until tender, when grated cucumber, onion, pepper and lime juice are added. Allowed to cool, pudding and souse is served cold.

Closely related to the empanada or Cornish pasty, the beef patties of Barbados contain minced beef (rather than chunks of the meat).

The mince is cooked before being placed inside its pastry cocoon, with onion, garlic, and chopped potatoes.

The result looks a lot like an Irish beef and potato stew, including the gravy, which is evaporated off as the pan simmers on the heat. The addition of tabasco provides some Bajan kick.

A couple of spoonfuls of the meat mix is then wrapped in pastry and baked until the pastry is lightly browned and the mix bubbling out of the seams.

The ackee tree is native to Barbados, and produces bunches of a round green fruit of the same name that ripens during the summer months.

The fruit has a thick skin resembling that of a citrus fruit. When removed, often by a simple bite from the teeth, a jelly-like pulp is revealed which Barbadians just adore.

Also going by the name of guinep, it is not only eaten straight from the tree, but is also added to a plethora of other dishes, including stews, curries, and soups. It is most famously eaten with saltfish, a tradition that began on nearby Jamaica.

As you might expect, brown stew chicken consists of a chicken stew that has a deep brown colour when served.

This colour comes from first searing the pieces of chicken in a brown sugar glaze. This creates a thick gravy to which garlic, onions, and carrots are added.

Despite being cooked in sugar, brown stew chicken is not overly sweet, thanks largely to the addition of Scotch bonnet chillies and a good helping of aromatic spices. For an even richer flavour, the chicken is marinated with the spice blend for several hours before being seared in the pan.

Macaroni pie at its most basic is macaroni cheese cooked in the oven in a casserole dish. Like macaroni cheese, its principle ingredients are elbow macaroni pasta, cheese, and milk. Different chefs also use different spices or flavourings, from mustard to tabasco and curry powder.

A popular side dish, macaroni pie is frequently found beside plates of fried fish, where it can either be served hot straight from the oven, or cold from the fridge.

Pepperpot is a dish that originates with the Amerindian tribes such as the Kalinago people who inhabited the island before the arrival of Europeans and other peoples in the fifteenth century.

It is a dark, almost black stew of red meat, using beef, pork or mutton. During the stewing process, the meat is infused with the strong flavours of cinnamon, chilli peppers, and cassareep to create a dish unlike any other on Barbados.

Cassareep is a syrupy black liquid made from boiling down the bitter juice of the cassava root before blending it together with various spices including cloves and cayenne pepper.

Pepperpot is much harder to find than other traditional dishes on the island, since it requires several hours of cooking time.

If you didn’t already know Barbadians have something of a sweet tooth, you certainly will after reading about this dessert dish.

While an ingredient in various savoury dishes such as fish cakes, the natural sweetness of the sweet potato really comes into its own when used in desserts.

Not a million miles away from the pumpkin pie you will find across the United States, with a similar texture and setting, Bajan sweet potato pie combines boiled and mashed sweet potatoes with pieces of crushed pineapple, local cherries, cinnamon and nutmeg.

Once the ingredients have been mixed together, they are spooned into a pie or tart case, and baked until tell-tale cracks begin to appear on its surface. It’s best served with a dollop of cream.