Bacon grease is one of the most flavourful cooking fats, guaranteed to make a delicious addition to any dish.

Loaded with smoky flavours, it is used to enhance everything from baked goods to vegetable dishes and steaks, adding a distinct flavour profile.

Not easily available in the market, making bacon grease can be a timely and tedious extra step. The bacon must be cooked slowly on medium-low heat in a cast iron pan to render the fat, and a large portion of bacon is required to yield a small serving.

Here is a list of alternative great bacon grease substitutes for you to consider. 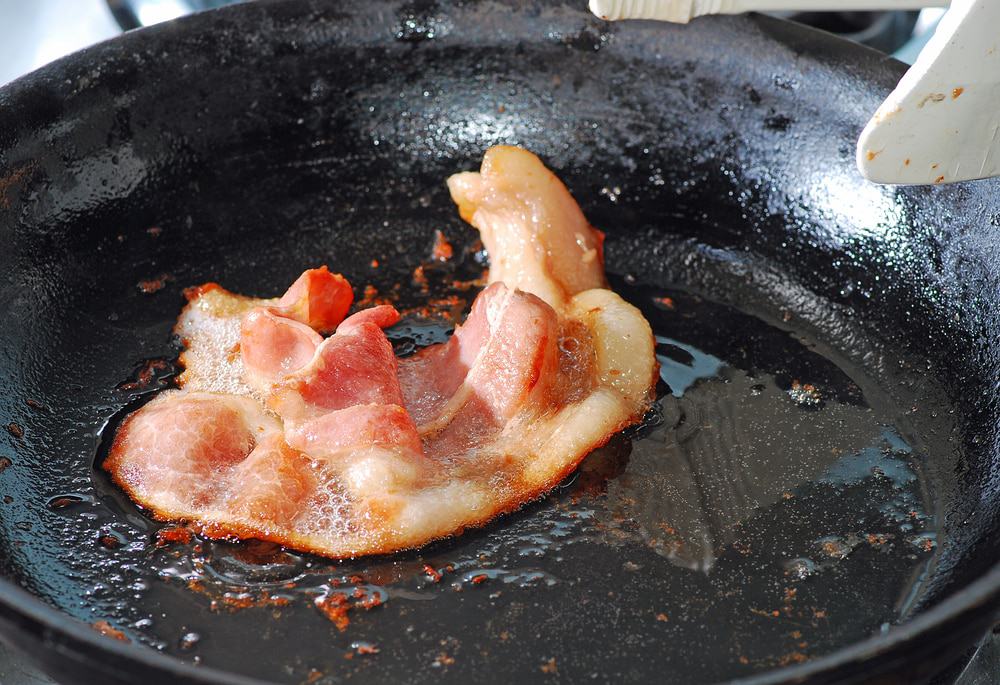 This is a universal bacon grease substitute, ideal for those looking for a non-vegetarian substitute.

Use for roast potatoes, rice, root vegetables, eggs, and even pour over duck breasts to achieve beautiful crispy skin while roasting.

Because the fat has been rendered it has a medium-high smoke point so it can be easily used to caramelize onions without burning.

Beef fat is another animal fat you can use instead. It contains a lot of nutrients and adds a lovely juicy texture to your dishes. It works great for grilled or overnight dishes as well as rice topping, noodles, and pasta.

Be sure to remember not to overdo the heat settings so you don’t burn food or spices. You can pan-dry the beef fat to release the grease and store it for future use.

Very similar in texture to bacon grease, butter is very versatile and is a very important ingredient in all cuisines, particularly delicious when farm-made from unpasteurised milk.

It has a sweeter taste than bacon grease and is softer and creamier.  Butter works well when pan-frying fish, chicken breast and prawns and can prevent ingredients from sticking while adding a nutty flavour.

It is probably the most convenient substitute, being found in nearly all supermarkets.

This vegan-friendly substitute works because of the naturally high-fat content found in nut butter.

Use almond butter for vinaigrettes, curries, noodles and sauces.  It is easy to make at home by blending toasted almonds into a smooth paste using a food processor and adding some neutral oil and salt.

Stored in a sealed glass jar in the refrigerator, it can last for up to two weeks.

Ghee is a good replacement for bacon grease. It has a very high smoke point making it a great cooking fat that’s easy to fry with.

People who are dietary sensitive to dairy, use ghee as the milk solids are partially removed by the cooking process, making it a stabilized cooking fat, like bacon grease.

Commonly used in Indian cuisine for making naan bread, rice pilaffs and roti’s, ghee is also used all over the world for numerous cooking techniques including adding to soups, stews and smoothies.

Ghee can be kept without refrigeration for two to three months but will last longer, up to six months, when stored in a sealed glass container in the fridge.

Oil made from coconuts is very high in saturated fat, higher than bacon grease.

It comes in the form of a liquid and solid. Availability of this substitute is becoming more common making it a viable vegan option.

Coconut oil adds earthy, aromatic flavours to soups and can be used to make tasty healthy popcorn and granola. Brushing coconut oil over chicken will give it a delicious shiny look as well as add a crispy finish to the dish.

There is no need to refrigerate coconut oil, but keeping the lid tightly sealed can last a long time, up to two years, in your pantry.

It is normal for the oil to go from solid to liquid form depending on the temperature of the environment it is stored in.

This is a great plant-based substitute for bacon grease. Its light, subtle aroma makes it easy to use, as well as it enhances spices and herbs whilst cooking.

Besides its great health benefits, it is suitable for all types of dishes including bread, roasting vegetables, seafood and various meats.

In addition, the oil can be used directly as a salad dressing, dip or simply used as a marinade. Olive oil is fat-free and has a high smoke point always look for cold-pressed on the label and store in a dark place.

Pressed from sesame seeds, sesame oil is a great substitute for bacon grease.  The oil has an almost smoky flavour just like bacon grease.

Light sesame oil has a high smoke point and is more suitable for deep-frying than toasted sesame oil.  It can be used to stir-fry meats and vegetables, season Asian sauces, soups and marinades, and makes a great addition to an omelette.

Avoid sautéing with sesame oil as the flavour may become too intense. It keeps well when stored in the fridge.

This is the fat from inside the bird, melted and strained.

Duck or goose fat is best with any type of potato. It enhances earthy flavours and cooks into a golden crust, be it hash browns, mashed potatoesor fries, you can’t go wrong.

This fat makes an ideal substitute as it has the same texture and consistency as bacon grease.

Once used, it may be strained and stored in a refrigerator in a tightly sealed container for about a month. Take care – duck and goose fat quickly become bad.

Lard is the semi-soft white fat found in the fattiest part of the pig. You can find many different types of lard: sheep, goat and even plant-based.

You can spread it onto toast or simply use it as a great tenderizer for steaks in solid form. Smear some onto meat for a juicier tender outcome.

It will keep at room temperature but is best kept in the refrigerator where it can be stored for up to a year.

Bacon grease brings out a stand-alone flavour and a great texture to your cuisine.

But with the ever-growing desire to find eco-friendly substitutes, the need has been created to search for substitutes such as the ones mentioned above.

Either way, all are enjoyable additions to most dishes, and when used correctly, can change the way you cook.