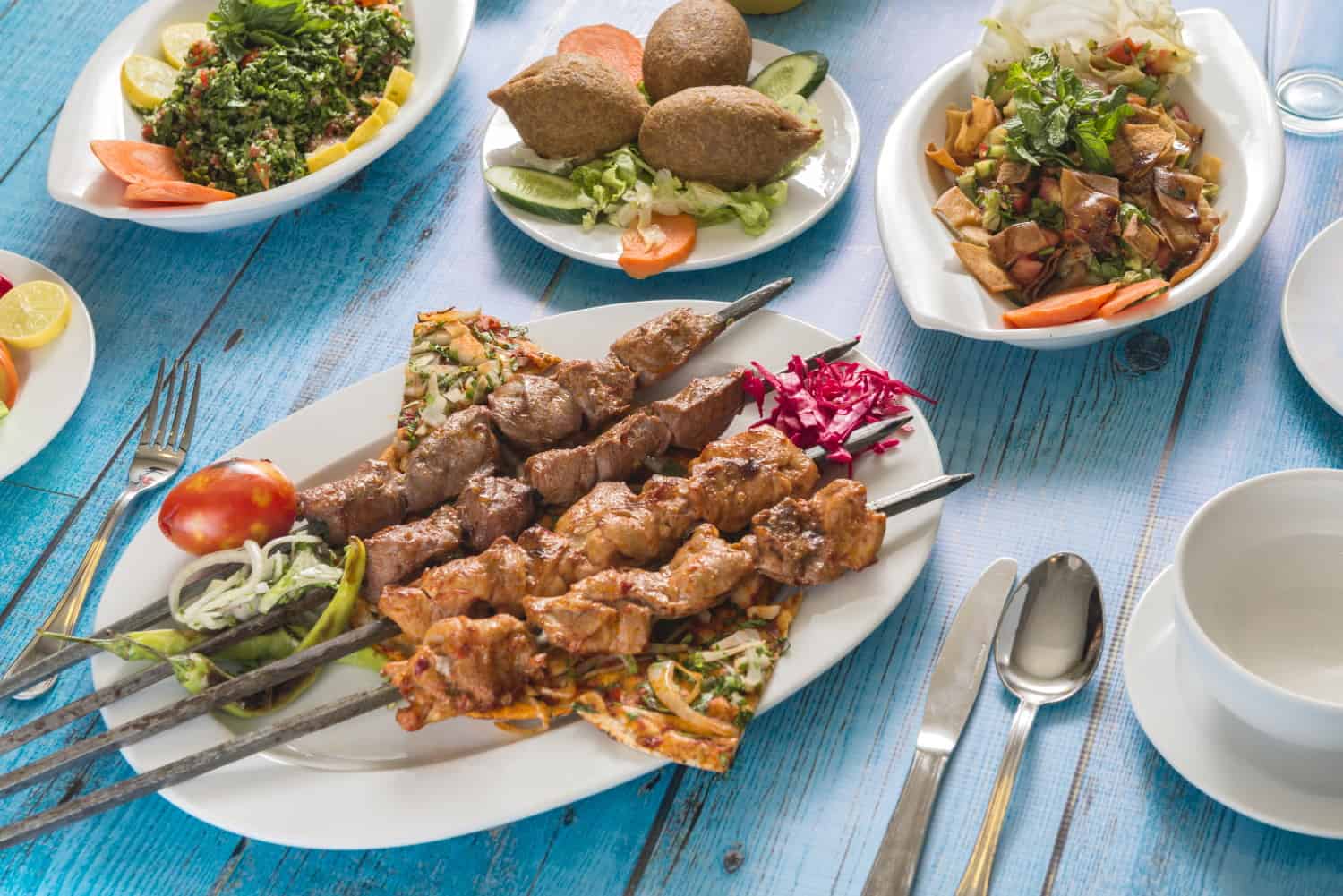 Home to Arabs, Kurds, Greeks and a plethora of other minorities from the surrounding region, Syria’s traditional cuisine is a diverse menu of dishes.

It uses a wide variety of ingredients, originating from the Mediterranean, western Europe, and the Middle East.

One of the cradles of early humanity, cities including Damascus are some of the oldest continuously inhabited cities in the world. It’s therefore no great shock that some recipes are known to have remained largely unchanged since the thirteenth century.

What’s more, centuries of trading and migration mean that many Syrian dishes can be found in restaurants right around the world. Here are the plates we think you shouldn’t miss. 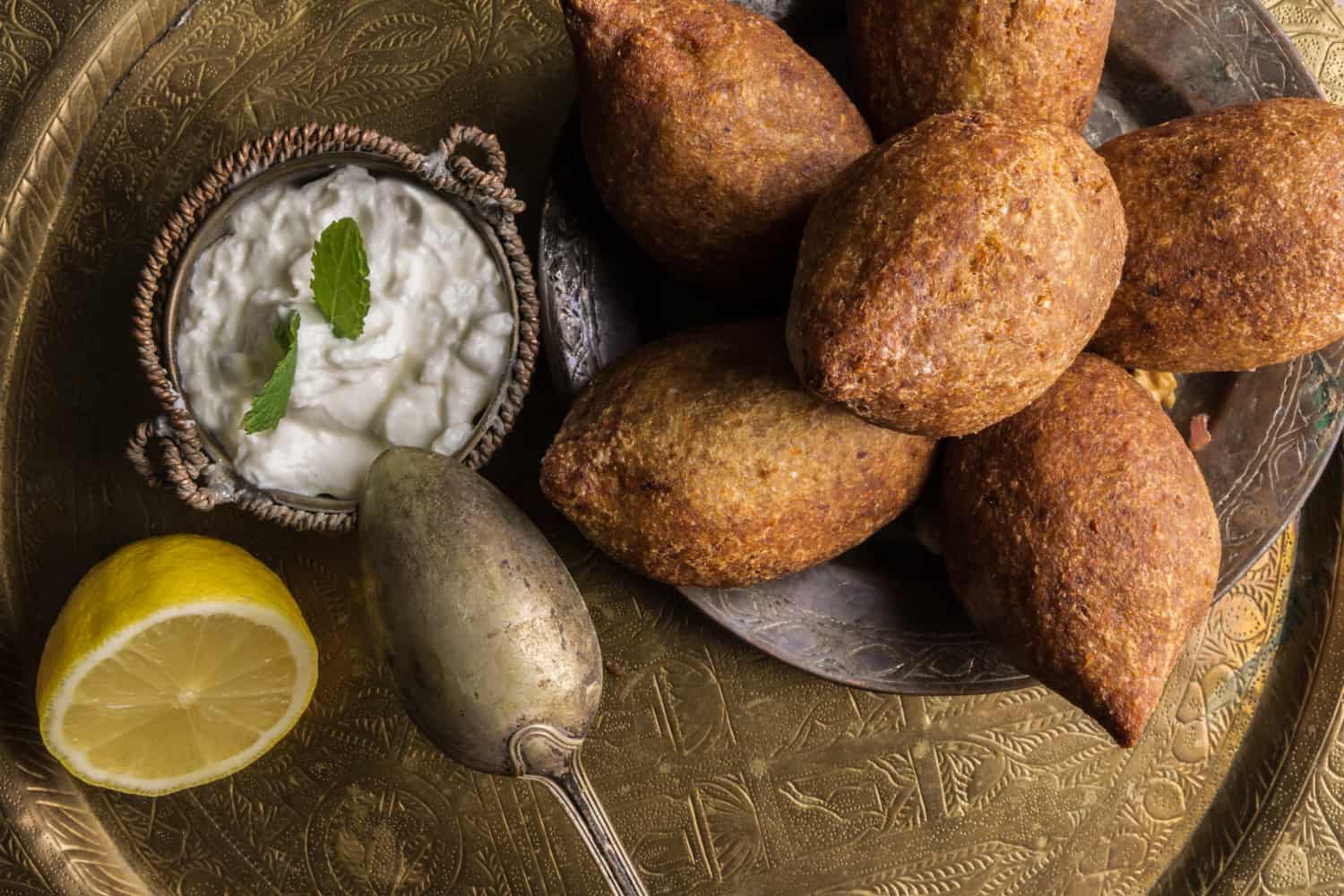 Kubbeh (or kibbeh) is the name given to a related group of dishes often described as being Syria’s national dish.

It comes in the form of deep-fried, baked, grilled, or raw bulgur wheat combined together with spiced minced lamb to form a paste which is then shaped.

Kubbeh generally takes a rough egg shape, although its name comes from the Arabic for ball. It is part of Syria’s tradition of meze plates, which see small quantities of a variety of dishes placed on a table.

When served raw, like steak tartare, the dish is known as kubbeh nayyeh. Kubbeh kishk is a soup which sees the balls covered in a broth made from butter and yogurt as well as cabbage leaves.

Manakish, which also takes the name manousheh when spoken about in the singular form, can also incorporate minced meats, although vegetarian versions exist too.

This dish is typified by topping a pre-cooked flatbread with additional ingredients, in a similar way to a pizza.

At their simplest, manakish can be topped with nothing more than the herb thyme, or the za’atar spice mix, which is a blend of thyme, oregano, and sesame seeds alongside other herbs.

Manakish can also be finished with local cheeses like akkawi, or with minced lamb. In this case, the minced meat is usually combined with finely-chopped tomatoes.

While not unique to Syria’s borders, falafel are certainly an intrinsic part of the country’s traditional cuisine.

These deep-fried balls are normally made by blitzing up cooked chickpeas, although falafel can also be prepared using fava beans too.

Served alone, as part of a meze platter, or with flatbread to form a kind of sandwich, falafel traditionally come topped with a number of accompaniments.

These include tahini (sesame dip) and chilli sauces, fresh salad, and pickled vegetables.

Spices including cumin and coriander give falafel their distinctive, moreish, flavour.

When it comes to sweet dishes, the easiest to find in Syria is certainly baklava. These small bites are an integral part of the country’s café culture, where men in particular meet one another for tea or coffee.

Reaching Syria during its period of Ottoman rule, baklava are sweet pastries made from filo pastry either placed in layers or shredded to resemble spaghetti and wrapped around chopped nuts.

These two components of the dish are kept together by the liberal use of honey or syrup, making each piece of baklava extremely rich and also very sweet on the tongue.

Baklava filled with chopped pistachios is said to have been invented by a chef in the Syrian capital in the 1870s, while other versions instead make use of chopped walnuts or hazelnuts, all local to the region.

Fattoush is a salad made up of cucumbers, lettuce, tomatoes, radishes and any other combination of fresh vegetables that are available.

The key ingredient is torn or chopped up pieces of flatbread that have been either toasted or fried beforehand.

The choice of ingredients used can mean that fattoush can be relatively simple in taste, but this base flavour is enlivened by the addition of fresh herbs, including sumac, which gives the dish a slightly sour note.

If you’ve previously enjoyed Turkish cuisine, you might already know muhammara as acuka. Either way, this dish is the same, and is a paste or thick dip predominantly made using crushed chilli peppers.

Born in the Syrian city of Aleppo, it is common for local Aleppo peppers to be used, either in their fresh or dried form. They are rated as being relatively mild, providing the dish with a heat which shouldn’t be overbearing.

The other ingredients in muhammara then provide a subtle sweetness that matches the natural profile of the peppers. These include a blend of crushed walnuts, spices like cumin, pomegranate juice or molasses, and breadcrumbs.

Muhammara can be eaten with bread, or used as a sauce or marinade for kebabs and other grilled meats popular in the country.

When it comes to kebabs, there is no shortage in Syria’s traditional cuisine. In fact, there are somewhere in the region of 25 different versions of Syrian kebab, known as kebab halabi, or Aleppo kebabs.

Minced lamb pressed onto a metal skewer and cooked slowly over charcoal so that the meat remains juicy and succulent is probably the most common meat used. For instance, siniyyet kebab is made with minced lamb that is then served on a plate alongside chilli, onions, and tomatoes.

However, beef can also be used, as in the preparation of kebab khashkhash. This form of kebab is flavoured with parsley, garlic, and pine nuts, as well as an authentic chilli pepper paste such as muhammara.

The most unusual form of kebab to look out for is surely kebab karaz, which is made from lamb meatballs stewed with small sour cherries known as the St Lucie cherry. The result is a brown-purple dish with sweet and sour flavours.

Most meals in Syria are finished not with a dessert as such, but with a bite of a sweet. You can find these sweets – halawat el jibn – served in most restaurants, as well as in cafes and bakeries in even the smallest towns.

It is believed that halawat came into existence in the Syrian city of Hama in the west of the country, although as a speciality of nearby Homs, it’s also possible that the dish was created here.

Halawat are made of a dough of akkawi cheese with semolina and sugar syrup which is then filled with cream and finished with crushed pistachios. Some recipes replace the akkawi with mozzarella, while many also call for the addition of rose water or orange flower water to create an aromatic taste.

Another of Syria’s intriguing traditional dishes is booza, a type of ice cream or frozen yogurt with a chewy texture.

Its unique texture comes from the addition of the naturally occurring gum mastic, as well as salep, a flour rich in starches that comes from grinding the tubers of a particular species of orchid.

Rather than being churned like modern ice creams, booza is instead pounded and stretched while being chilled. It is then dusted with pistachios before being served.

For the most authentic of experiences, you’ll want to try booza at a store in the Al-Hamidiyah Souq in Old Damascus called Bakdesh.

Yalanji consist of vine leaves stuffed with cooked rice and mixed vegetables. They are slowly simmered with lemon juice to allow the leaves to impart their flavour to the other ingredients, before being served cold as an appetizer to a main dish.

Common vegetables used for the stuffing include bell peppers, tomatoes, and onions. This blend is then added to with herbs and spices including the Syrian spice blend of b’har, mint, garlic, and pomegranate molasses.

A similar dish of vine leaves stuffed with rice and minced meat is called yabrak, and is served hot as a main meal.

While often thought to refer to the resultant wrap or sandwich, shawarma actually refers to the method of cooking thin slices of meat on a large rotating spit.

Any meat can be cooked in this way, but it’s most common in restaurants to find it to be lamb or chicken.

As the spit is rotated in front of a flame or heating element, chefs shave off pieces of the stacked slices. They are placed in a wrap or pita bread together with freshly chopped tomatoes and salad vegetables, grilled peppers, pickles, tahini, hummus, and also French fries.

Shawarma are easily found on the street, and are a perfect lunch.

The word fatteh comes from the Arabic for crumbled, since this dish contains broken up pieces of bread, similar to fattoush.

The bread can be fresh, or toasted, although traditionally it seems likely fatteh was one of the ways to use up bread that had gone stale.

Especially popular in Damascus, it can be eaten as a main meal or a breakfast the following morning. Khubz flatbreads are usually used, which once broken into pieces are topped with yogurt, chickpeas and a little olive oil.

This acts as the base of fatteh, to which cumin is added. Other ingredients, ranging from grilled aubergine (egg plant) to small cubes of lamb can finish the dish off.